In the nutty world of muscle-bound SUVs, the 475-hp Jeep Grand Cherokee SRT 4x4 is a bit of a girly-man.

Sorry, dude. Until Uncle Sergio drops that supercharged 707-hp Hellcat Hemi under your hood (and you just KNOW he will), those pressurized hunks from BMW, Porsche and Mercedes-Benz will be opening a can of whoop-ass on your American flanks at every turn.

But let’s forget about those costly Teutonic terrors for the time being. With a starting price of $65,995, this well-sorted and well-endowed SUV does its American thing very well. It delivers big-bore V8 performance and decent value.

And the 2015 Jeep Grand Cherokee SRT’s talents go deeper than that.

Back in the day, I tested a 2012 edition and found it exciting, brutish and surprisingly good at unwinding a twisty road. Since then, the GC SRT8 has ditched its five-speed auto for the ubiquitous ZF eight-speed unit. (It’s also gone up in price by ten grand.) For 2015 power is up (5 horses to 475 and 5 torques to 470) and they’ve added a noise-cancelling system to quiet the cabin.

While you probably won’t notice the marginal power increase, the new tranny and noise cancelling go a long way in lending an extra layer of refinement and civility to this big Jeep.

Far from coming across as a dumb brute, the 2015 Grand Cherokee SRT proves to be a mighty swift and luxurious SUV that needs to make no apologies to anyone. The seats are terrific, it handles better than any 2,420 kg SUV has a right to, and gussied up to $77,920, it sports all the safety and sybaritic bits you could expect in this segment.

2015 GC SRT proves to be a mighty swift and luxurious SUV that needs to make no apologies to anyone.

Looks pretty sweet too in Bright White riding on optional 20-inch “black vapor” forged aluminum wheels ($995). Sure, the 567-hp 553 lb-ft BMW X5M or X6M has a higher quality interior and will beat you around a race track, but choosing this Jeep leaves an extra fifty grand in your Dockers, give or take.

And nobody in their right mind will argue with the basso profundo 6.4L Hemi V8 and a five-second dash to 100 km/h.

Fire up the Hemi and it fills the cabin with a warm, purposeful rumble. Not too loud – just enough to let you know there’s something lurking under foot. Plant said foot and this Jeep howls and launches like a full-moon werewolf.

For a tall, porky ute, the SRT has a decently buttoned-down feel. Credit the new adaptive Bilstein dampers, rear-wheel torque vectoring, 295-mm wide tires all around, lowered stance and killer six-piston Brembo brakes. The steering, although a bit numb, is accurate and has a natural heft.

It’s only when you really start leaning on the SRT does all that mass make itself known.

The smooth, sonorous push-rod V8 and eight-speed auto make a happy pair. Leave the transmission to its own devices and it swaps gears with near imperceptibility. Tug on a paddle shifter in Auto and it goes into manual shift mode – and stays there until you cancel it by holding the + paddle for a couple of seconds. Once committed, the transmission won’t upshift until you tell it to or until the tachometer hits the redline.

This is a cool feature, as you never have to guess what the tranny is up to. So often, manumatics will revert back to auto mode if the paddles are not tickled for a brief period of time. Downshift rev-matching is also part of the equation.

The 6.4L Hemi has cylinder deactivation, wherein it shuts down half of its pots under light throttle – mostly highway cruising. There is a subtle change in exhaust note and wee bit more vibration, but overall you’ll never really notice it working.

As might be expected, fuel economy is not the GC SRT’s strong suit. You’ll manage mid-11s on easy highway runs, but after a bit of in-town driving the computer read 14.6 L/100 km. Thankfully, premium fuel is not required. 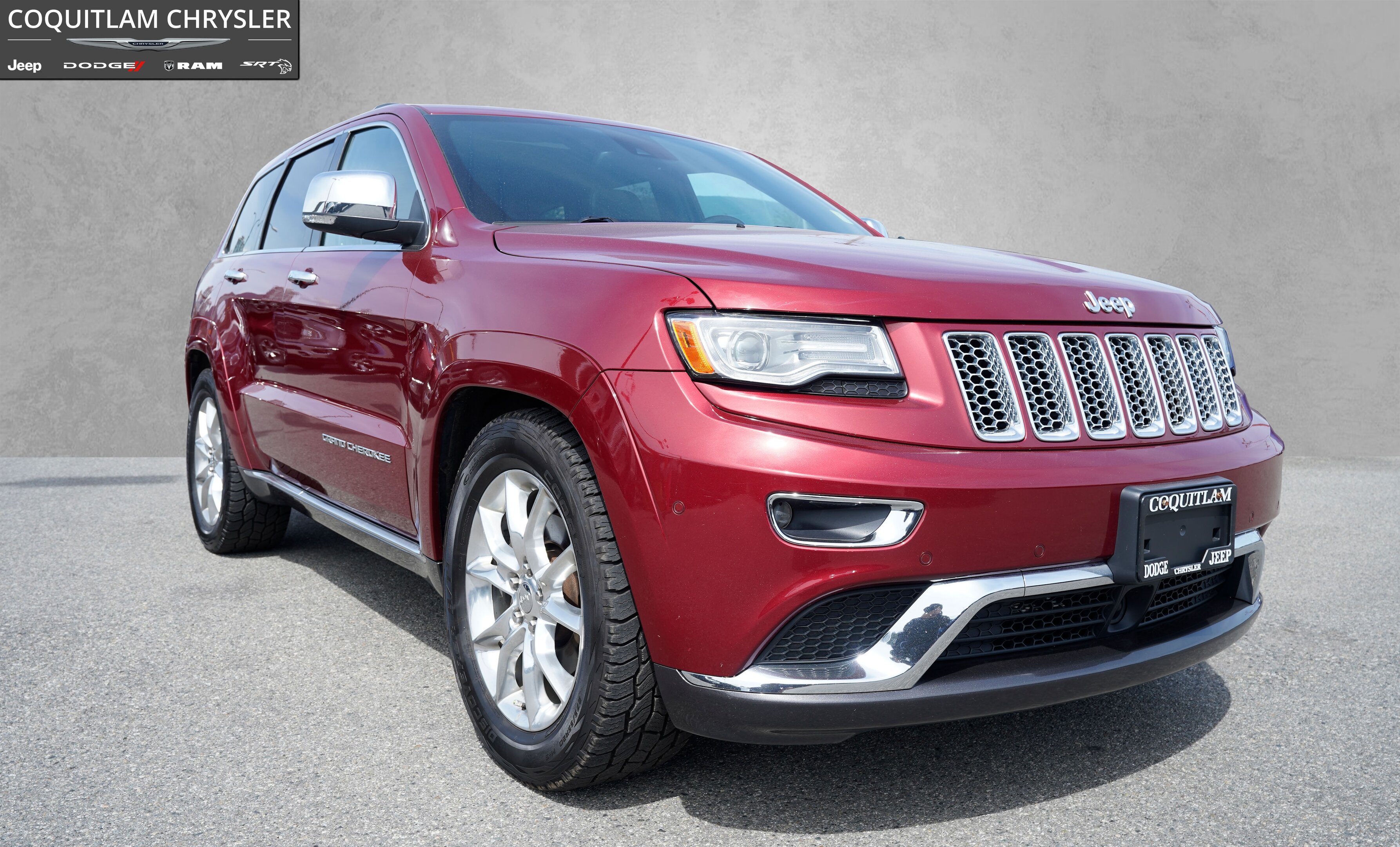 Despite its luxurious pretenses, the SRT’s ride is a bit pitchy and those big tires fwap over road imperfections – all part of this SUV’s handling edge.

FCA’s big Uconnect 8.4-inch touchscreen interface still holds up as being one of the best of this ilk. I usually prefer the German central control knob systems to touchscreens, but this one is logical, swift in responses, and the big icons are easy to hit on the move. The optional 825-watt 19-speaker Harman/Kardon audio gets two thumbs up as well.

This SRT’s Uconnect gets pages for recording lateral g-forces and acceleration if you’re interested in a record of your hoonage.

This Jeep gives away its lower price point when examining the interior detailing. The real carbon fibre accents look good but there are some cheap plastic bits in the lower dash and the tolerances aren’t up to German standards. Now is a good time to remember that bargain pricing.

However, the SRT sport seats with Alcantara inserts hit a fine support/comfort balance, and there were no complaints from rear seats passengers, as those chairs are similarly contoured and offer a recline function. Fold them forward and they create a flat load floor. There are a few small storage cubbies under the floor around the spare tire as well.

I’ve never been a fan of FCA’s finicky electronic shift wand that requires a delicate touch to when selecting Reverse from Park. Too often you will overshoot to Drive, utter some unprintable expletive, find your self back in Park again, do a bit more cussing, and so on.

We took the GC SRT on a day trip to a Golden Retriever breeder near Cambridge, Ontario to pick up our new puppy. She particularly liked the front seats, finding the soft Alcantara kinda’ fur-like, but on the ride home expressed her displeasure with the choppy ride by barfing in the crate.

If you’re trying to frame this whole high-po SUV thing with any kind of logic, don’t bother. The whole idea of trying to make a tall, porky all-wheel-drive box go like a sports car would have Spock foaming at the mouth. Nonetheless, manufacturers build them because people want them.

And as such, the 2015 Jeep Grand Cherokee SRT stands tall and carries a small sticker.

About Peter Bleakney
Peter Bleakney is a Toronto-based automotive journalist. He is also a member of the Automobile Journalists Association of Canada (AJAC).
Follow me
You may also like
6.4
AdChoices
Latest Articles
﻿