Last week Mercedes-Benz revealed the gorgeous brand-new C-Class coupe and today, the C63 AMG Coupe. A perfect cross between the C-Class Coupe and the C63 AMG Sedan, the C63 Coupe is a seriously good looking coupe, with no less than 469 hp and 479 lb-ft in 'standard' form and 503 hp and 516 lb-ft in C63 S form. The dry sump is the same 4L V8 twin-turbo lump used in the C63 Sedan and in the AMG GT S. Both variants will be equipped with the Mercedes AMG Speedshift seven-speed automatic transmission.

Taking a look at the sleek and aggressive lines that make up the C63 AMG Coupe, I can't help but think the C63 AMG Coupe is equal parts refined luxury and equal parts aggressive, brutality that's as home cruising the streets at the speed limit as it is nailing the apex of the nearest racetrack while making a monstrous, raspy racket that would serve as fit soundtrack for a Greek god battle of old - a true Jekyll and Hyde kind of car.

While the C63 Coupe shares the same doors, roof and trunk lid as the C-Class Coupe, the two cars become significantly different once you start looking more closely, or to a more perceptive eye, the differences are a lot more obvious.

The C63 is much wider than the C-Class Coupe - 64 mm wider in the front and 66 mm wider in the rear - the flared wheel arches, along with giving the C63 a much more aggressive stance, enable the fitment of much wider wheels and tires, for maximum grip in acceleration, braking and cornering.

The hood is 60 mm longer and two 'powerdomes' add to the aggressive and muscular look, while the twin-blade grille sits lower for an improved centre of gravity. Massive air inlets combined with the AMG 'A-Wing' front splitter aids aerodynamics while optimizing air flow to keep things cool while reducing front-end lift.

The side profile continues the sleek, muscular and refined look with wheels that sit flush in the wide wheel arches and unique to the AMG side skirts. The rear end features a diffuser insert that would look at home on a competition car, it also integrates with the twin chrome-plated tailpipes that finish off the high-flowing AMG exhaust system that sings a glorious song of its people. The rear bumper's two air openings improve aerodynamics while working with the narrow spoiler on the trunk lid to reduce rear-axle lift.

Looking at the C63 AMG Coupe from behind and the rear three-quarter view, one can really tell just how much business AMG means with the new Coupe.

The interior is a work of art on its own with carbon-fibre galore, a fat split three-spoke wheel and seats that actually look good enough to keep anyone planted through over 1G of cornering load or keep me comfortable for a 10-hour road trip.

Getting back to the exhaust and the song of its people, the C63 Coupe's engine sound was specially tailored and designed for the car. The new exhaust system takes advantage of flap technology and comes as standard on both models. It is automatically map-controlled and tuned depending on the AMG's user-selectable transmission mode. The exhaust valve changes based on how much power is demanded by the driver and on the RPMs. The engine sound can vary between a discreet note suitable for long-distance driving and city late-night cruising, to a more glorious, raunchy, punchy, demonic and emotional sound. If that's not enough for you, a Performance exhaust system is available to you, which allows the exhaust note to be modulated at the press of a button. You owe it to yourself to tick that box if you're already ponying up the dish for this car.

The new seven-speed AMG Speedshift transmission equipped with the AMG Dynamic Select transmission mode is also tailor-made for the C63 Coupe and AMG claims the response time along with the upshift and downshift time is noticeably improved than in the previous model - I didn't know that was possible, but ok! Drivers can pick between modes that vary from comfort to racetrack-ready. The C63 Coupe S comes with an actual 'Race' mode. To make things even cooler, an 'Individual' mode is available so you can tune the transmission however you want to. 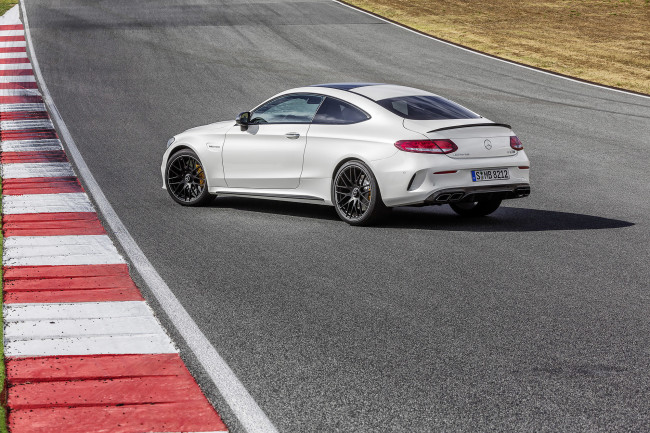 Suspension has been completely redesigned with a four-link front suspension with radial, racing- style brake connections, paired with model-specific steering knuckles and a wider track, allowing for greater lateral acceleration and deceleration. The rear axle has also been completely redesigned for the Coupe for more precise control and stiffness. The AMG-specific rear axle carrier makes the increased track width possible; the contact surfaces of the wheel bearings were moved about 25 mm further towards the outside when compared with the Sedan, allowing for the wider track.

The AMG Ride Control suspension is user-adjustable. The driver can control damping between comfort and racetrack-ready stiffness at the press of a button.

While the standard mechanical LSD is fantastic, the electronic diff found on the C63 S allows for more precise and faster control, allowing the driver to power out earlier and with more confidence. The driver can switch between the 3-stage ESP with "ESP ON", "ESP SPORT Handling Mode" and "ESP OFF".

As well as more dizzying and mind-numbing performance goodies than I can shake a stick at, the AMG C63 Coupe comes standard with 'Attention Assist' drowsiness detection system and 'Collision Prevention Assist Plus', which helps to prevent rear-end collisions, while many other optional assistance systems are available to increase both comfort and safety. 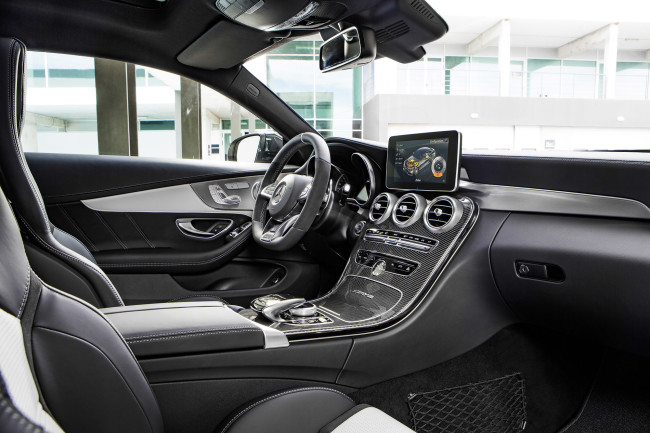 Pricing has not yet been released. I do know that driving purity be damned, I want one of these things. I'm not a luxury car guy, but every time I get behind the wheel of an AMG, I have to question just how much of a purist I really am, and for myself and my personal driving tastes and needs, this new AMG C63 Coupe looks to be better than anything else AMG has ever come out with and I'm ridiculously excited to drive this thing.

More details, along with the pricing will most likely be revealed at the official reveal in Frankfurt next month.

In the meantime, check out the gallery of high-res pics and the short one-minute video of the AMG C63 Coupe tearing up the track with some smoky drifts powering out of the corner.

About Ronnie Fung
Combining his passion for all things automotive, stunning photography, and the burning desire to share a good story laced with pop-culture references and humour, Ronnie has found his calling as a "do-it-all" in the auto industry.
Follow me
You may also like
AdChoices
Latest Articles