“Here, bring this with you, just in case.”

My dad handed me his trusty old parka as I was lacing up my boots in his entrance way. This behemoth of a winter coat is older than me, has a furry hood with a wire closure to keep it snug around your face, and was designed for manly men with beards and axes who need to be outside doing manly beard things at 52 degrees below.

The parka was from dad’s pre-kids career as a geologist working in the far north. Now, it sits in a closet, mostly. But that night, back in 2012, it was forty below, and after supper at dads, I had a four hour drive in the dark, in one Hyundai Santa Fe Sport 2.0T.

On a night like this, in the case of an accident or breakdown alongside a largely-empty highway 400 between Sudbury and Southern Ontario, a parka like this one could have saved my life.

That evening, after hitting every imaginable combination of weather, temperature and precipitation, I was prompted to write this story, focusing solely on the experience of driving the then-new Santa Fe through one of the most challenging concoctions of winter weather I’d ever experienced. And I’m a fella who has seen no shortage of challenging winter condition concoctions.

The gist? The headlights could have been better, but the winter tires, slick and very fast-acting AWD system and a well-tuned stability control system helped add some much-needed confidence, as the roads transitioned on my southbound drive from bare and frigid, to icy, to hard-packed, to nearly a foot of powder, then slush, untouched by highway maintenance crews for the entire drive.

That was three years back. Today, for this story, I’m visiting the Santa Fe Sport 2.0T again, for a second look.

The unit is the same. Black, not cinnamon, in colour, but an almost identically-spec’d Santa Fe Sport 2.0T. After no less than 10 highway hours (no snow this time), and a week at the wheel, a few elements continue to stand out, while a few others show their age.

Rear seats are grown-up ready, and easily switch from reclined to erect to folded flat for maximum space and comfort. Rear seat passengers get first-class treatment thanks to the panoramic glass roof overhead, and even privacy shades like you’ll find in a Bentley. The heated rear seats were a hit with rear-seat passengers on my watch, too.

All passengers appreciated the design of the lower door panels, too. These extend down and over the rocker panel area, meaning the caked-on layer of salt, sand and ice builds up on the door, not the surface you step in over. Open the door in winter, and you’re always greeted by a clean and shiny surface, rather than slushing up your trouser cuffs like a sucker. Finally, headroom is particularly generous 0 even with the panoramic roof.

Up front, there’s at-hand storage in abundance, two power outlets atop the deep central dash storage bin, and a proper dual-tier covered centre console and armrest. The USB port in the central console bin is, presumably, for data transfer only, as it barely charged my electron-hungry Smartphone, and I needed to use the 12-volt outlet and a USB adapter to juice it up.

In back, a nice wide and long cargo hold is available. A cargo cover helps keep your stuff out of sight, too.

I griped that the 2013 unit had no power tailgate, which it should have at its price, and this time around, the 2016 model-year tester fitted one. An auto-opening feature is included, too: just stand still near the Santa Fe Sport’s rear end for a moment, with the key in your pocket, and it opens itself, sans fumbling for your keys or the button if you’ve got your arms full of shopping and toddler.

(If you’re chatting with a parking lot pal near your Santa Fe, stand beside it or far away, as the system occasionally proves too sensitive, beeping loudly three times and opening the door if you’re hanging out near it).

Today, the cabin design is what we’d probably call average for the segment. There’s a layered look to some of the details and trim, some wood grain accenting for a touch of sophistication, clear and crisp instruments that appear high-tech and vivid, and a large central stack of controls, knobs, and a big touchscreen, top and centre. It’s neat and tidy and pleasingly modern, though numerous competitors have now stepped ahead in terms of design and materials. The Ford Edge looks more cohesive and up to date. The Dodge Journey has a more powerful and intuitive navigation and multimedia system. The Nissan Murano looks more daring and classy. So, Santa Fe Sport hits hardest for functionality, with interior design and atmosphere trailing behind, a little.

To your writer, the driveline and support systems stand out even further as Santa Fe Sport’s strongest assets today. The 2.0L turbo is eager and potent from very low revs, and can be driven under 2,000 rpm with thrust to spare, and barely a peep from the engine bay. There’s a low-rpm effortlessness thanks to the heap of low-end turbo torque, and called upon, the little beast of an engine rockets you along with urgency, even if it’s 265 horses, at full song, are nothing to listen to.

Then, there’s a really good AWD system. Even with extremely light throttle in deep snow, all four wheels are powered. In most situations, four-wheel traction is engaged secretly, as the vehicle comes to rest. Translation? You almost always accelerate from a dead stop with the rear wheels getting at least a little power. Forget so-called slip-and-grip.

Otherwise, when the system deems it necessary, rear wheels receive additional power quickly – within 1 to 2 revolutions of the front wheels. They get a good serving of the engine’s power, too. Hyundai says a fast-acting electro-hydraulic clutch in the rear coupler is to thank.

From the driver’s seat, you’ll be smiling when you feel the system scrambling and clawing away at the surface beneath for grip, instead of waiting for rear-wheel traction to be engaged as you sit, spinning the fronts. When required for added grip in extremely slippery situations, Santa Fe Sport even has a driver-selectable LOCK mode, which sets the AWD into a 50/50 split, provided speeds don’t exceed about 40 km/h. This handy function is still relatively rare in the segment.

Both the ABS and Electronic Stability Control systems feel expertly tuned too. Straight, predictable and consistent stopping power comes under hard braking on any slippery surface, the Santa Fe squirming only slightly as braking power is dosed out on a wheel-by-wheel, inch-by-inch basis to keep the nose pointed straight. The ESC system prefers to allow slight overpowering of the wheels, using the capable and instant-acting AWD system to fling snow from the tire treads as a means to movement, rather than shutting down the throttle and leaving you all but paralyzed as you try to pull out of the Costco parking lot at a traffic light.

All said, Santa Fe Sport’s support systems feel tuned and calibrated for confidently sporty capability in severe conditions. Ride quality adds to that confidently sporty feel: it’s on the stiff and sporty side, with a layer of softness dialed in around the edges of the stiff-set shocks, so ride quality is typically very complaint, though shoppers after a floating-on-a-cloud ride won’t find it here.

Fuel mileage on my watch, this time around, landed at 11.2 L/100 km, including plenty of highway driving at a good clip. The driver-selectable Active Eco setting numbs the throttle and can help achieve better mileage, though I never turned it on, as I’m a fan of throttle response. 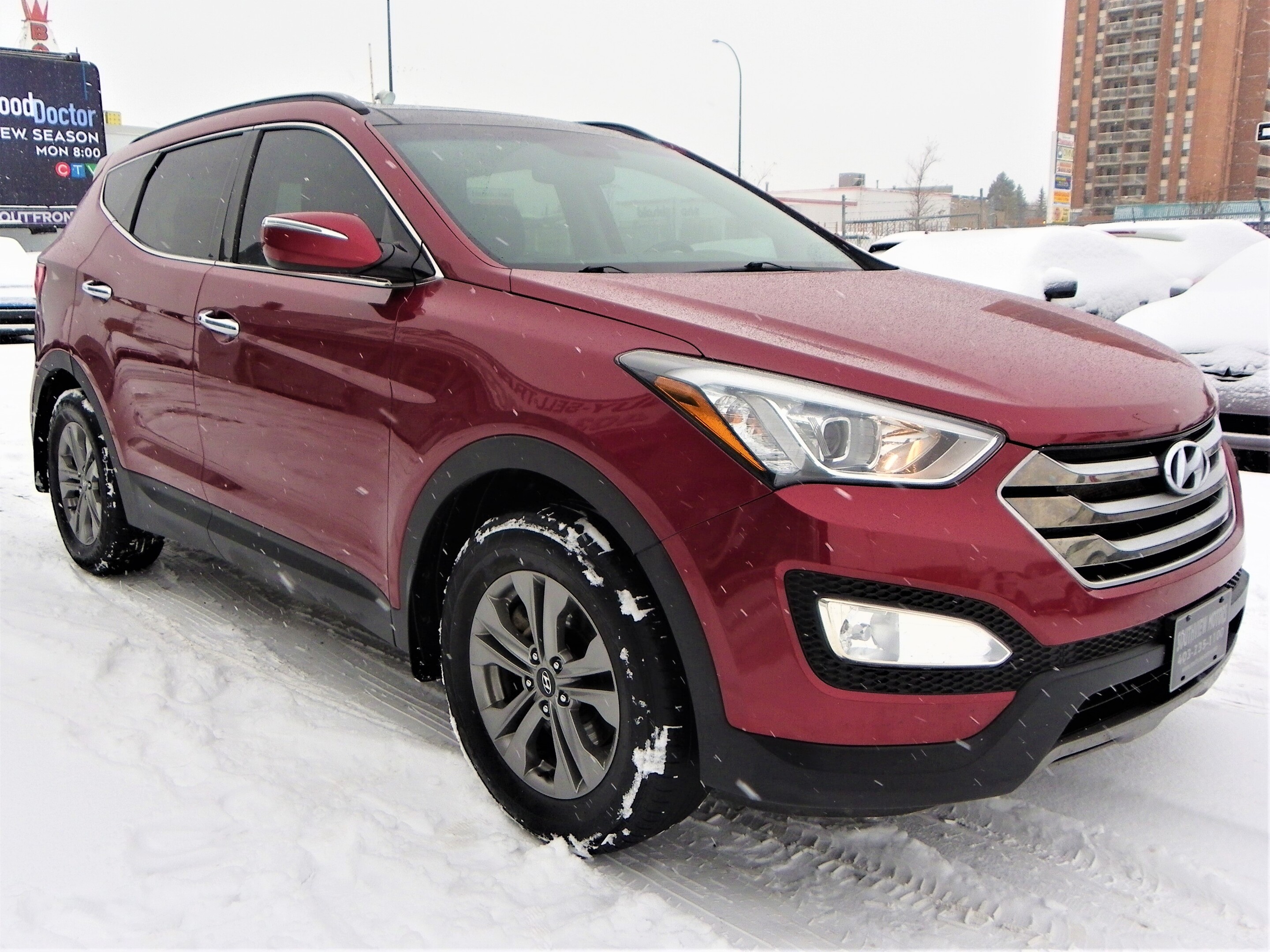 Ultimately, Santa Fe Sport appeals most for space and functionality, and perhaps especially, in use of its powertrain and support systems to turn in a stable and confident driving feel when the going gets slippery.Other notes? The Driver Selectable Steering Mode (DSSM) system offers three steering modes (Sport, Normal, Comfort) which are toggled via a button on the steering wheel. A neato idea, but I found all modes other than Sport to be too light and quick at highway speeds, where steering inputs could feel like they were startling the Santa Fe a little, causing it to lurch when an input was received.

About Justin Pritchard
Justin Pritchard is an automotive journalist, consultant, TV presenter, and photographer based in Sudbury, Ontario.
Follow me
You may also like
7.2
AdChoices
Latest Articles