I can’t believe I’m saying this: but through my week with the Lexus CT 200h, the little Lexus hybrid really started to impress me.

I’ll admit that I had a bias going in: “It’s a Prius with Lexus badging,” I thought. “And once I get past the fancy leather and infotainment, that’s all it’s going to be.” That’s not quite it, though.

First of all, the arrival of a new product from a (now former) Toyota brand is actually having a positive effect on the CT. When the world finally saw the production-ready Scion iM hatch, the internets were almost immediately abuzz/ablaze with what the brand got wrong. The production iM was so much more conservative than the slammed, wide-bodied iM concept. It looked tamer. It looked flatter. It looked… like something Lexus might do.

Then, as I began to further consider the iM, I realized that it looked like something Lexus had already done, and that’s the car you see here. Which, in one of those great automotive ironies, began to change my perspective on the CT for the better. Where the iM may not have been aggressive enough to fit the wacky Scion brand, that the CT sits so close to it stylistically is a boon for the lil’ Lexus hatch.

Especially in F Sport Special Edition guise – this is not a bad-looking car.

F Sport alone adds a special front grille (which got the trademark Lexus “spindle” treatment for 2014), rear spoiler and some interior bits, but my car’s F Sport Special Edition package kicks things up yet another notch, adding blacked-out wheels, taillight surrounds, wing mirrors and door handles, as well as two-tone NuLuxe (read: faux; it gets upgraded to real leather if you add the F Sport 3 Package) leather seating inside. The black and red seats may not be to everyone’s taste (especially when paired with our car’s fairly tame Atomic Silver exterior paint), but I would be surprised if anyone argues with how purposeful, even racy, the exterior looks with all those black accessories. 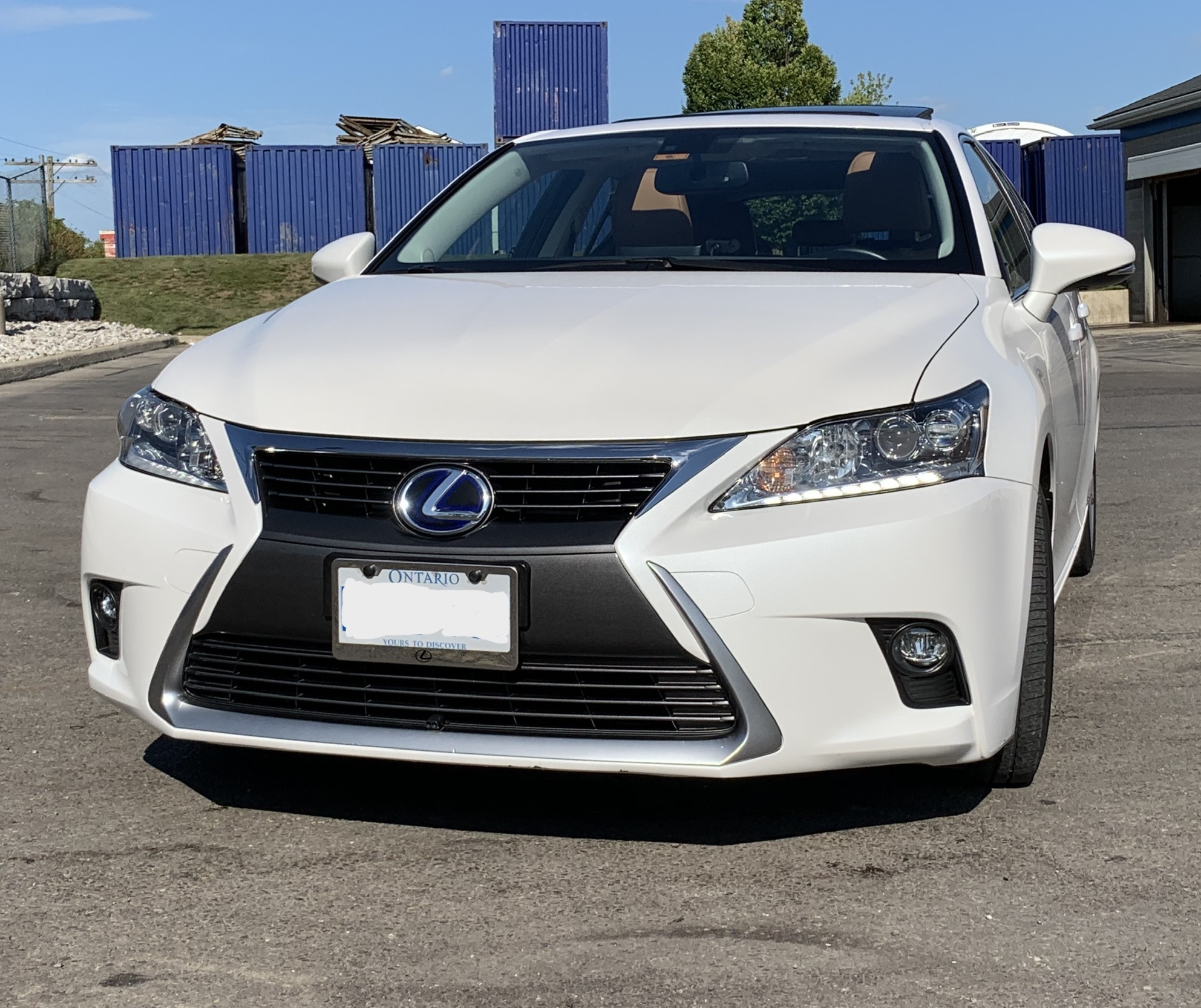 It’s got a nice stance, it has presence and if I’m honest, it drew more looks during my time with it than I thought it would. That bloody great big grille and those LED DRLs probably help, but either way, this is a good-looking car.

Apart from the red seating trim, the rest of the interior is pretty standard Lexus fare. You’ve got your upsweeping centre console and weird dash overhangs, with a centralized control knob for your drive modes (ECO, Normal, Sport), a smattering of other buttons and a scroll wheel for your infotainment system.

You can upgrade to a cursor-style Lexus Display Audio interface (controlled via joystick), but I think I prefer my car’s “all scrolling, all the time” interface. I found it to be easier to work with than the other system, which I found either too sensitive, or too imprecise when I sampled it in other Lexus products. My one complaint about my car’s system is that scrolling through the menus didn’t happen as smoothly on-screen as I’d like.

The rest of the interior environs are nice; the 1,068 mm of legroom at 989 mm of headroom up front are on par with what you’d get from that iM, as well as the VW Golf TDI. Now – before you say anything – I know, being a luxury model, those two vehicles aren’t really competitors for the CT 200h. Thing is, the Germans have vehicles that would compete directly with the CT, just not on our shores. They have decided to put their weight behind compact crossovers, so really, it’s vehicles like said Golf TDI that are likely going to be cross-shopped against the CT 200h. You may be able to throw in other practical hybrids like the Ford C-Max, too, or even the VW Jetta Hybrid Turbo or Acura ILX Hybrid. However, The CT undercuts many of those on price (including the Acura and VW sedans, which all start above the CT’s $31,800 asking price at base), which should be mighty appealing to many.

For its part, the CT can go shot-for-shot against the Golf in the size department unless we’re talking about the wagon, of course, which has more interior volume than does the CT. Our tester, though, beats the rest on the practicality front save for perhaps the C-Max models.

Me? Give me the nice, low-slung driving position and good view out provided by the CT any day. Add an airy cockpit provided by the moonroof (a feature that goes all the way down to the Touring package), and the front seats are a nice place to be.

The back seats, however, are a little snug; the Acura and Golf both have more legroom, so I wouldn’t subject the longer-legged to long rides in the back. Fine for car seats and kids, but let’s just say it’s good that the rear seats fold completely flat, and that the security tonneau cover stows neatly in the cargo bay floor, providing unhindered access to the cargo area. Even with seats up, though, the trunk still has 405L of capacity and low lift-over.

As you start to make your way towards actually driving the thing, the first thing you’ll notice is that it hasn’t completely left its Prius roots behind when it comes to the controls. I’m speaking, of course, about the shift “lever”, which is actually more of a switch as the CT gets the same electronically controlled continuously variable transmission (CVT) that the Prius has.

“Gear” selection is different than in the Prius, if only because the lever position in the CT is slightly different and closer to the driver. You still have to bump it up and to the left for reverse, and down and to the left for drive. For me, the biggest adjustment came when trying to select “B” mode (this increases drag when coasting, so it’s better suited for in-town use), which requires that you first select “D”, then move it down and to the right for B. I can’t count how many times I tried to go straight to “B”, only to have the car yell at me, telling me I had to first select “D”. I guess it makes sense, considering that most will only revert to “B” once they see the traffic is getting bad, and driving in B can be a little uncomfortable as simply releasing the throttle will have you feeling like you’ve hit the brakes, which can make for some lurching progress.

Combined power for the 1.8L Atkinson cycle four-banger is rated at 134 hp and 142 lb-ft; not a huge amount for a 1,420 kg car and if you think all those shiny F Sport bits mean the CT’s going to blow your socks off in a stoplight Grand Prix, you’ll be sorely disappointed.

Which, of course, is why you’ve bought a hybridized Lexus hatch in the first place; you want to look kind of cool – which you will, in F Sport spec, anyway – but efficient progress is likely priority number one, and you will have that.

The transition from gas to EV mode is a smooth one; there is no lurch as the engine comes on-line, and not very much noise, either. It happens automatically, but you can force it to hold EV mode for longer with the press of a button mounted beside the drive mode select wheel. It doesn’t guarantee EV mode – and I was heckled by numerous “EV mode unavailable; excessive speed” messages during my time – but I like having a modicum of control for when I know I’m going to be sitting in traffic, where EV is key.

EV can, however, do more than just navigate the urban grind; we saw stretches of cruising at 40-50 km/h in EV, which is nice to have, and helped contribute to the 5.4 L/100 km fuel economy figures we saw on the highway. In the city, meanwhile, we regularly clocked in at 6.5 per, which is a little up on Lexus’ claims on both fronts, but something must be said for the fact that it was achieved when driving normally, with the occasional hypermiling maneuver thrown in. Thing is, as more and more hybrids become readily available, “hypermiling” may not be just a buzzword; it will be how many drive naturally.

While we’ve talked at length about what F Sport does for the styling, it isn’t completely an aesthetic upgrade. While it doesn’t do much for the powertrain, it does mean performance-tuned dampers. On the surface, they’re imperceptible as the car doesn’t sit any lower than it normally would, but as you begin to give it the beans in the bends, there’s a pleasing responsiveness from the chassis, if one that can’t fully separate itself from the curb weight. It’s all relative, of course; the CT 200h, even in this spec, would still rather coddle its passengers on the day-to-day then give them the “fizz” in the twisties, but it nevertheless remains a step up on a lot of other efficiency-first cars on the market. You won’t confuse it for a Ford Focus ST, but at least there’s something there for the enthusiast in you, however small a character they may be.

“Sport” mode, for its part, doesn’t really do much more than change your charge meter to a tach, and proceed to have the car bumble forth somewhat nervously as it tries to keep the engine on boil, given the limitations provided by the CVT. It just becomes a bit of a noisy mess, to the point where I stopped bothering with it. I was much happier exploring the other end of the spectrum; keeping the car in “B”, and moving along silently, smoothly and efficiently.

Indeed, you have to think that this particular example of Lexus’ “F Sport” packaging is really mainly about the looks, as CT buyers, I would imagine, are more interested in getting into the luxury game without breaking the bank, but with a keen eye towards efficiency and practicality.

It’s got the efficiency bases covered, that’s for sure. Practicality? In a word, yes. However, there will be those that are drawn to the larger interior environs of the Golf, say. Thing is, the Golf is not a Lexus, and that badge means something; the CT may be a bit luxury-lite, but that’s just the ticket for some.

With the CT, you get a nicely sized hatch, fuel economy that stayed pretty close to the manufacturer’s claims during our testing, and all the niceties that come with the Lexus badge, all for a price that sits around the 30K mark if you don’t need all the F Sport flashiness. I’d say that’s a lot to like, and does well to hide the Prius underpinnings. If that’s something that matters to you, of course.

About Dan Heyman
Dan Heyman is a car guy through-and-through, ever since his first word was “Toyota”. Dan has worked as a full-time automotive journalist since 2010.
Follow me
You may also like
7.6
AdChoices
Latest Articles
﻿