Hyundai is probably betting that the Elantra sedan’s more conservative styling, like vanilla ice-cream, is going to appeal to a wider demographic. They might be right.

Canadians liked what they saw and Elantra sales skyrocketed. Last year, the Elantra was still the third-best-selling passenger car behind the Corolla and Civic. 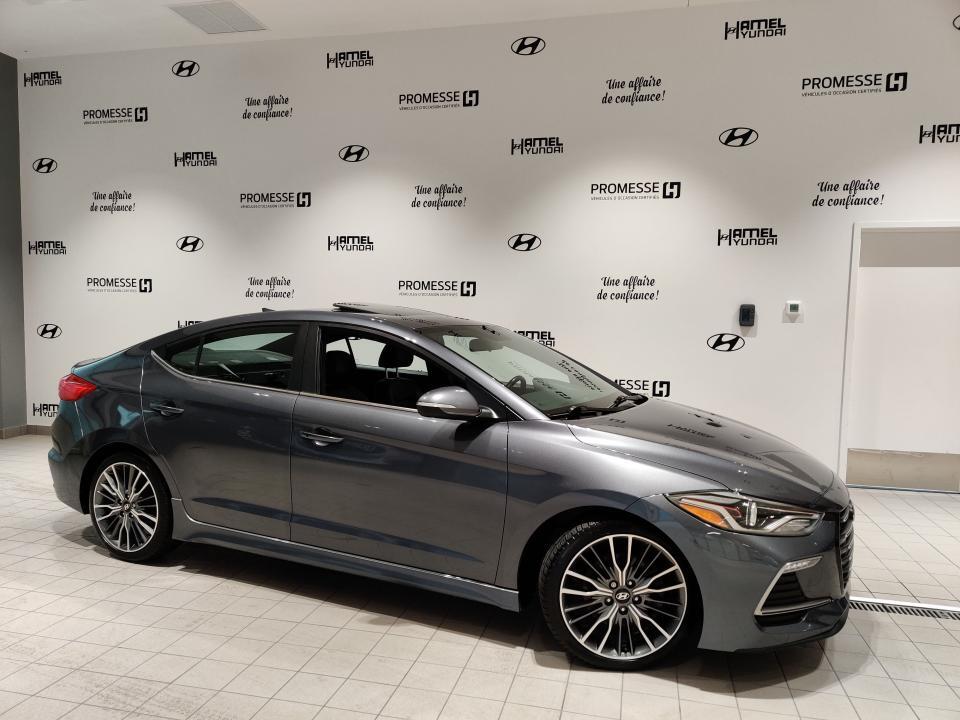 While still recognizable as an Elantra, the 2017 model has a horizontal profile with less-aggressive body creases and a fastback roofline that now extends all the way to the trunk lip (similar to the new Civic sedan) where there is a slightly upturned spoiler. A larger hexagonal grille opening with five slats is similar to other Hyundai models and echoes the big grille craze that started at Audi, Ford, Toyota, Mazda, etc.

Hyundai is probably betting that the Elantra sedan’s more conservative styling, like vanilla ice-cream, is going to appeal to a wider demographic. They might be right. So far this year, the Elantra is still number three in sales. However, that may include sales of the 2016 Elantra sedan and GT hatchback.

Behind the wheel though, the new Elantra doesn’t feel slow or underpowered, but it does feel smoother and quieter. Improved structural rigidity, more sound insulation, thicker glass and improved bushings have all contributed to a quieter cabin and a revised torque converter helps improve shift response and engagement.

New this year is a driver-selectable Drive Mode with Eco, Sport and Normal settings that adjust throttle response, transmission shift timing and steering feel to suit the level of performance required (the previous Drive mode just altered steering weight). In my test drive, Eco mode left me feeling that the car needed more power, Normal mode felt just fine for everyday commuting, and Sport mode was great for zipping in and out of lanes in traffic, accelerating quickly from a traffic light, or adding some excitement to a challenging road. So despite its drop in horsepower, I didn’t get the impression that the new Elantra sedan was an underperformer.

It’s very pleasant on the freeway: the engine revs at just over 2,000 rpm in Normal mode, and there is minimal engine, wind and tire noise, even though my test car was still equipped with Michelin X-Ice 225/45R17-inch winter tires.

The driver’s visibility is generally good but the high rear deck makes the rear view rather narrow. A standard wide-angle rearview camera with parking guidelines really helps back the car into tight parking spaces. I also appreciated the rear parking sensors which beep more frequently as the vehicle approaches an obstacle. A standard blind spot warning system also helps to warn of other vehicles in the right or left blind spots when attempting to change lanes.

The best thing about the new Elantra sedan, apart from its improved on-the-road refinement, is the design of the new interior. The 2017 Elantra’s redesigned dash layout has more of a conventional, horizontal appearance than the previous curvy dash and while the styling is less adventurous, I found it more practical in everyday use. A larger 8.0-inch touchscreen (formerly 7.0-inch) is now angled slightly towards the driver instead of pitched forwards, so it’s easier to see and there’s less glare. The screen is also wide enough for a split-screen view, such as of currently playing audio and the navigational map.

Below the touchscreen, a wider centre stack allows more room for larger, easier-to-see buttons and a simpler layout makes adjusting controls such as the temperature and fan speed and radio much easier. One exception: the stop/start button is hidden behind the steering wheel.

At the bottom of the centre stack, the storage bin is wider without a flip-up cover, but its sliding floor reveals hidden 12-volt, auxiliary and USB ports. Between the front seats, a wider centre console allows some controls, such as the seat heaters, to be repositioned around the shift lever rather than on the dash or steering wheel and there is a padded armrest that slides forward when needed. Underneath is a deep storage bin.

Behind the steering wheel, the Elantra’s backlit tachometer and speedometer now have a simple white-on-black face and the fuel and coolant gauges have been incorporated into the two larger gauges, freeing up more room in the (wider) centre information display for the trip computer and driver information. Controls on the steering wheel are now horizontally arranged instead of curved – the latter could be confusing when searching for the right button. On the doors, the power window and power mirror buttons are now arranged horizontally rather than vertically, as are the doors’ grab handles.

With its slightly taller roof and wider cabin and new horizontal design theme, the interior of the 2017 Elantra feels more spacious. In front, I had plenty of headroom and legroom and in the rear I had about 50 mm of kneeroom and about 40 mm of headroom in the outboard seats. The seats are quite comfortable and the driving position benefits from a tilt/telescoping steering wheel and a large dead pedal to rest the left foot.

The Elantra’s roomy 407 L trunk is fully lined but its rotating hinges can intrude on luggage space. For long items, the split-folding rear seatbacks can be lowered from the trunk area by pulling on the side levers. The liftover height into the trunk is low and the opening is wide, but I would recommend a bumper guard to protect the flat surface of the painted rear bumper. A temporary spare tire and tools reside under the floor.

Though many will mourn the loss of the 2016 Elantra sedan’s distinctive styling, a test drive in the new sedan is likely to convince them that other more tangible benefits can outweigh initial concerns about its appearance.

About Greg Wilson
An automotive writer for over 30 years and co-founder of one of Canada’s first automotive websites, Greg Wilson has moved into the editorial slow lane and now contributes occasional vehicle reviews and features to autoTRADER.ca’s editorial section. Greg is a member of the Automobile Journalist’s Association of Canada.
Follow me
You may also like
7.6
AdChoices
Latest Articles