“We didn’t want this truck to be a compromise,” says Rich Miller, chief designer of Titan for Nissan. His pride when he speaks about the team’s efforts on the Titan is palpable, as is his evangelical way of spruiking the purpose of this truck.

“The Titan line-up fits into 80 percent of this market.”

It’s not playing the numbers game, it’s not in the domestic GVW/towing war – this truck has been considered and weighed to meet a target.

To prove it, he pulls up a slide showing a slice of the truck segment, the reasons truck owners buy their truck and the range of uses.

“The Titan line-up,” Miller beams, “fits into 80 percent of this market.”

How? Well, Titan has two iterations: the Titan (half-ton) and the Titan XD (three-quarter-ton). Both come with a 5.6L gasoline V8 mated to a seven-speed auto. The Titan XD is also available with a 5.0L V8 Cummins Turbo Diesel paired with a custom six-speed auto. There’s a V6 in the works for Titan too – but they wouldn’t tell us any more about it.

The V8 is aging now: it’s the same one found in the Infiniti QX80 and the Nissan Armada – but it remains a grunty, surging unit that feels stronger than its 394 lb-ft and 390 hp numbers would suggest. It has been retuned for 2017, and those output numbers are 9 lb-ft and 73 hp higher than previous. Additionally, the torque curve has been flattened considerably with more available from early on and right through the rev range.

If you really want bulk torque, you’ll need the diesel with 310 hp and 555 lb-ft. The Cummins donk pulls hard from the line, but you can feel the diesel lugging during highway acceleration. There’s some jounce and vibration to it if you prod hard on the juice from about 80 km/h, but it will confidently maintain pace with a trailer on board on steep inclines. Nissan put us on one of Quebec’s steepest hills and as my ears popped and the truck arrester-beds passed by, my co-driver asked if I was flat to the floor – nope. I was only at half throttle, steadily churning uphill at a constant 90 km/h while towing a 6,000 lb trailer with a bobcat on it.

If that’s not enough proof of the capability of the Titan, Nissan decided to hook the Titan XD to the Charlevoix train and tow it down a short stretch of track for us. The 167,000 lb train well exceeded the 12,010 lb tow rating of the XD and yet it pulled it so effortlessly the event was downright anti-climactic! I even asked if the engineer was using some of the train’s power to help, but was assured that wasn’t the case.

Once you’ve picked your size and your powertrain, there are options for the cabin configuration too.

Both trucks come in five trims: S, SV, PRO-4X, SL and Platinum Reserve. The availability of colour and trims is identical across both trucks in order to make the decision-making process easy. Nissan says they wanted people to be able to choose their truck based on their needs, not on what features or colour were available.

SV adds chrome bumpers, skid plates, heated mirrors with side-turn lamp, satellite radio, sunglasses holder, trailer sway control and the Tow Package with receiver hitch, in-bed gooseneck hitch, tow mirrors, integrated trailer brake controller and trailer light function check. That function check, by the way, is a very clever innovation. It allows you to control the indicators and brake lights with the fob remotely, so you can stand behind the trailer and check the lights.

The off-road sport-focused Pro-4X trim is the one to get if you intend to hit the rough stuff most often, it adds to the SV trim: 18-inch machined wheels with all-terrain tires, Bilstein Shock absorbers, locking rear differential, hill-descent control and Pro-4X logos and stitching.

The Pro-4X is the truck we took on a brief off-road course. More of a cottage-road with big rocks and some minor washouts, the course nonetheless demonstrated the Titan’s ability to cope with the biff and barge of the trails. The 18-inch wheels (as opposed to 17s and 20s on other Titans) allow for the Titan-specific all-terrain tires to be fitted. These high-profile tires do a lot to soak up the ugly stuff while still providing feedback through the wheel.

Pro-4X models are also equipped with hill-descent control which uses the braking system to modulate speed on steep declines. I was shocked by how loud the brake intervention was, at first stopping because I thought I was grinding out on something. Compared to the Mercedes-AMG G Wagon and the Jeep Trailhawk products I’ve been in, this system is frighteningly intrusive and violent. I ended up turning it off and doing the work with low-range and my right foot.

Handling is impressive, but more so in the Titan XD. While the tighter turning circle of the Titan is enjoyable, the XD has a habit of smoothing out the bumps and riding the road better, especially while in turns. The smaller Titan by comparison is a little juddery and bouncy – though only compared to the XD. It remains a well-balanced and composed workhorse, but can’t match the benefits of XD’s heft when it comes to riding roughshod.

Steering is hydraulic on both trucks though it’s rack-and-pinion on Titan and recirculating-ball on Titan XD. I’d noted that the hydraulic steering gives a pleasing heft to the wheel and good road feel ahead of the presentation and was intrigued by the against-the-grain decision. Turns out the decision to avoid electric assistance was made to improve steering feel particularly when towing.

Towing is also aided by the transmission tow mode, which opens access to hill speed control – essentially the transmission will allow much higher revs to use as an engine brake and to improve smoothness. Maintaining the gear is more important than maintaining a set rpm in tow mode. There’s also a hand-operated trailer brake in the cabin.

In operation I found it to be a really powerful system that isn’t as difficult to get to as I thought it would be. It’s also effective, and you can feel the trailer easing itself without affecting the car.

In addition to the towing component, Nissan had us load up a pallet crate of apples in the bed and drive around some of the rougher roads in Quebec. Unsurprisingly the Titan XD was utterly unfazed by the Honey Crisps in the back, to the point I flat out forgot they were there. Even under extremely heavy braking the Titan XD felt secure with only a modicum of extra pressure on the pedal required to stop me in my tracks.

You may notice from our photo sets that the Titan and Titan XD are nearly impossible to tell apart from a distance or in isolation. This is deliberate from the team at Nissan. Apart from the badging, there are subtle clues though.

The XD has a higher hood, grill and fender for both packaging and cooling in diesel form – the Cummins engine sits high. On the subject of grills, both Titans get Active Grill Shutters for improved fuel economy, the grills close between 30 and 140 km/h and open outside of that window to allow for more cooling.

Models without sidesteps will represent a challenge for shorter drivers, at 5'6" I found the 625 mm step-in height challenging. I also had to jump to close the hood on the XD – much to the mirth of the onlookers.

Once in, I found it easy to find a comfortable seating position and I was impressed with the outward visibility, especially with the tow mirrors and Nissan Around View monitor equipped.

I was also impressed by the lack of wind and road noise in the cabin. Extra lamination on the glass and additional spray-in deadeners in the floor are responsible for the quietness in the cabin, with only a small amount of engine noise seeping through. 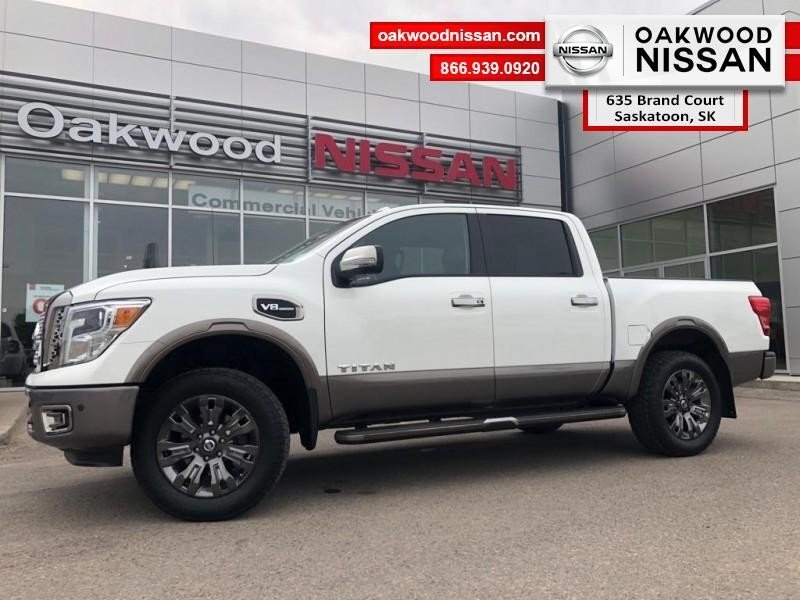 Knowing that they are a challenger in this marketplace, Nissan has moved to head off reliability concerns with what they claim is the best warranty in the segment. The five-year, 160,000 km bumper-to-bumper limited warranty will apply to all Nissan commercial vehicles. Loaner vehicles will be available at the dealer’s discretion.

Crew cab Titan and Titan XD have already hit the sales floors with single-cab editions arriving in November. King cab models will be available soon after.

About Jacob Black
Jacob is a writer and a journalist who enjoys cars, driving and jokes. Sometimes he writes a series of jokes and loosely connects them to a car he was driving. Jacob Black is not a werewolf.
Follow me
You may also like
AdChoices
Latest Articles
﻿