I was a talkative child.

Don’t fear the A4’s fancy bits: they’re all fairly intuitive, and you won’t need to hire your university math professor to figure out how to work all this stuff.

And (presumably) to give themselves an occasional break from my non-stop yammering about everything in the world around me, mom and dad often treated me to a large cardboard box, a pack of markers and numerous rolls of stickers and labels, so I could go off to my room and build a spaceship. Consoles, buttons, touchpads, things that beep, screens that glow, dials and switches: I’d fill every square inch of that empty case of Cottonelle with gadgets, and create my own futuristic cockpit.

So, the new-for-2017 Audi A4 makes me smile when I get seated. Its cabin is, perhaps, the strongest expression of a shift into next-generation luxury sport sedan territory. There are new safety features, new driver assist technologies, and a striking new look that brings the A4 in line with the brand’s latest – and upcoming – design language. But the real stand-out thing is how the cabin, from a mere glance, stirs a deep love of everything high-tech that grabs gadget geeks like me right by the feels.

Displays, screens, buttons, touchpads and LED indicators all invite inspection, and unlike my cardboard spacecraft, it’s all assembled with an eye for detail and craftsmanship, manipulated with precise tactile feedback, and all executed without use of any Crayolas or empty label stickers. If you fancy your luxury car cabin on the very high -tech side, you’ll like what’s happening in here: it’s busy, bright, and nearly cluttered with buttons and pads. Glimmering LED lights, multiple display consoles, and a gigantic high-definition screen in place of an instrument cluster are among the on-board showstoppers. There are even cupholders in front of the gear shifter. God bless you, Audi.

The comparable BMW and Mercedes cabins look more traditional, perhaps more all-out luxurious. The Lexus IS approaches the same ballpark for high-tech flair blended with more traditional luxury design elements. The Cadillac ATS and Volvo S60 look downright stone-age by comparison. Audi’s latest design ideology is all about advanced luxury, and in that regard, this cabin nails it.

If you’re not a techy type, or if you frequently call the neighbor’s kid for tech-support with your smart TV, you may find it all a little overwhelming. If you can operate an iPad, you’ll be just fine.

Don’t fear the A4’s fancy bits: they’re all fairly intuitive, and you won’t need to hire your university math professor to figure out how to work all this stuff.

The futuristic look isn’t just for show, either.

Thanks to the new A4, cars that use cameras, sensors and mapping data to memorize things about your drives to save fuel are a thing that exists. The A4 can remember speed limit changes, the location of hills and topographical details, and even the location of stop signs, for future use in making subtle operational changes that trim away at fuel consumption.

Or, approach a traffic jam, and the radar cruise brings your speed down, and a message pops up with a ding that reads, “CONGESTION ASSIST ACTIVE”. You’re in a low-speed auto-pilot mode now, with full throttle, brake and steering control turning a stressful traffic fluster-cluck into a relaxing and enchanting tour de technologie, where you needn’t touch the pedals or steering. A4’s active lane assist system can even handle the steering inputs for you at highway speeds, if you like.

This autonomous driving business freaks your writer out a little, especially since it worked almost flawlessly over 2,000 kilometres of test-driving. (Soon, cars may drive themselves, and there will be no use for auto reviewers, and yours truly will be reduced to a career of restocking toiletries at the local Super 8.)

On a highway cruise, the S-Line equipped tester rides as expected: sporty-taut with a moderate layer of softness around the edges of the suspension travel to increase comfort. Noise levels are about average for the segment, and the steering, even in the not-particularly-sporty Comfort drive mode, is on-centre heavy enough to stay bolted to its course with ease.

Around town, that steering lightens a measure. The effort is reduced, that notch of on-centre weight shrinks, and the ratio is re-jiggered so drivers need to do less work to maneuver in tighter spaces, or whip through slower traffic. There’s this whole light-on-its-feet thing that shines through: at around-town speeds, the A4 is easily directed, feels refreshingly trim, and responds hard and fast to minimal steering inputs.

Audi A4 available on autoTRADER.ca 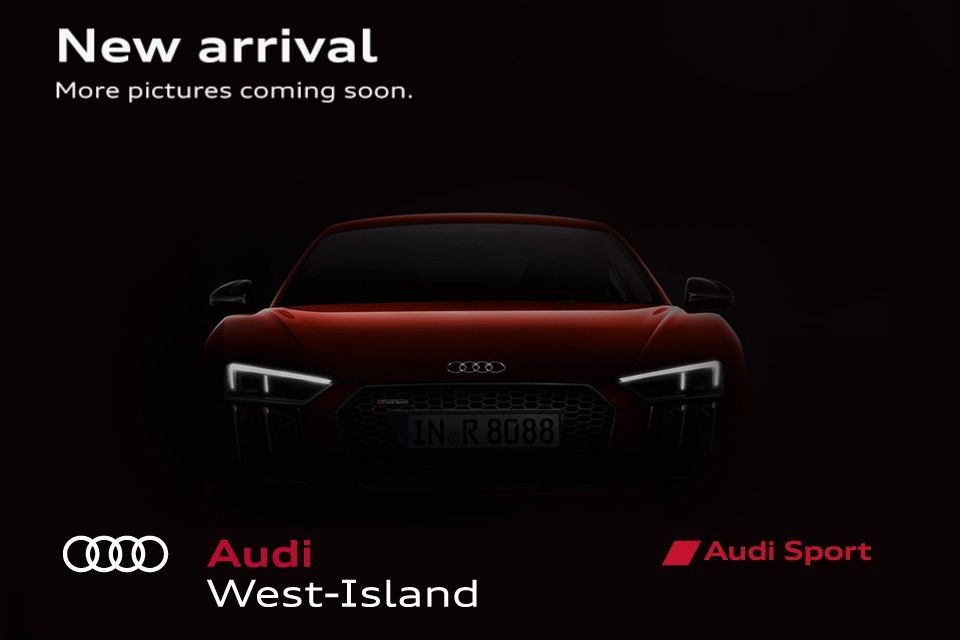 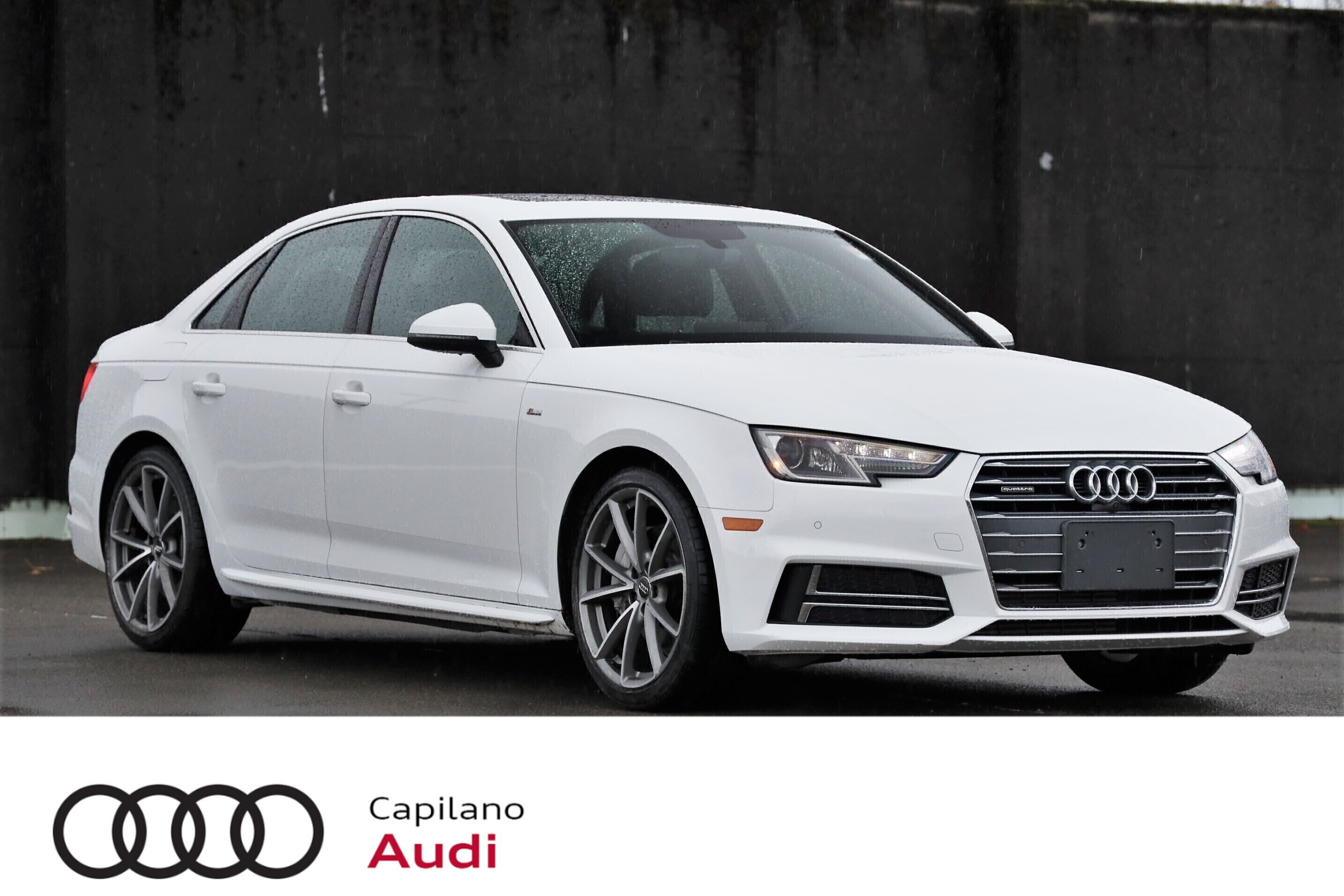 Get it to a winding sideroad or an empty highway interchange cloverleaf, and it really comes to life. The A4 is the better part of 275 pounds lighter this year—a relatively small figure on paper, and a reduction similar to letting your heftiest friend out of the car. But it’s how engineers have tuned the car around that reduced weight that counts: where the Lexus or BMW feel heavyset and weighty, the A4 turns in more quickly, feels less bothered by fast changes in direction, and grips with ferocity. It’s a refreshing thing to drive, and even more rewarding the harder you push it. If you like a sports sedan that feels nimbly-bimbly, lean and as frisky and mischievous as a roomful of baby raccoons, this won’t let you down.

Given the sharp handling and seamless grip of the Quattro AWD system, which sees traction perpetually out-gunning power output, some drivers will wish for a more precise feel at the brake pedal. Stops are fast, but the pedal feel isn’t conducive to precise modulation. Other drivers may wish for more than the 252 available horsepower, courtesy of a 2L turbo four-cylinder. In fact, numerous competitors in this pricing ballpark offer considerably more power, even if the A4’s engine is pleasingly refined, brimming with torque, instantly responsive, and nearly inaudible much of the time. Competitors to avoid at stop-lights include the BMW 340i and Infiniti Q50 Red Sport 400.

Drive gently, and A4 oozes up past the speed limit on the sly – not because of abundant output so much as smooth operation. Hammer down, and the thing thrusts ahead, with little more than a smooth little growl seeping into the cabin. It’s fast, just not excessively fast, once a little whiff of turbo-lag passes.

The seven-speed S Tronic transmission is typical Audi: seamless at all times, lightning-fast in its beautifully rev-matched shifts, and capable of making the digitally displayed red tachometer needle flit around at a hilarious speed. [UPDATE: Audi has now announced that a manual gearbox will be available in Canada, which is a good thing]: The S Tronic box is faster and more efficient than a stick, though the A4 still had me itching like a dollar-store bathrobe to row ’em on my own.

First, the adaptive LED lighting system is exemplary. Clean, crisp white light thickly and evenly saturates the full width of the roadway and roadside ahead, and peripheral lighting into roadside foliage and culverts is top-notch. I’d have plenty of notice should a creature decide cross the road – always a concern on highways in my locale.

Second, the Bang & Olufsen stereo system is a fantastic travel companion for a lonely nighttime drive, thanks to potent and finely detailed sound reproduction, and accurate imaging of sound sources during playback of anything from Clapton to Rise Against. This stereo is vivid, bright and powerful, even capable of revealing new details in familiar music tracks.

Elsewhere, exterior styling should satisfy, too. The A4 packs more big-Audi design touches than ever, looks clean, sharp and distinctive, and flies under the radar with a discreetly sporty flare when kitted-up with the S-Line package, like the tester. Unlike competitors who flaunt more fake chrome and glitz than a Toddlers in Tiaras marathon, the A4 never shouts, visually.

Functionally, the trunk is square but not overly wide or deep, call it about average for the segment. Rear seats are a little tight on width and headroom for a 5'11" guy, though legroom is more than adequate once seated. Rear-seat headroom will be a concern for those 6' and taller.

At the end of the day, where styling, handling and especially the driving environment are concerned, the A4 is a compelling and energizing take on the modern luxury sedan. For shoppers concerned more with the feel and design of their ride than all-out under-hood firepower, the A4 is worthy of serious consideration.

About Justin Pritchard
Justin Pritchard is an automotive journalist, consultant, TV presenter, and photographer based in Sudbury, Ontario.
Follow me
You may also like
8.1