Along with the keys to this fully loaded minivan, the lovely people at Toyota helpfully included a booklet outlining all the various different safety systems it had. “That’s nice,” I thought, and tucked the brochure in the glovebox before heading for the mountains, shutting off the traction control, and doing huge, wonderful, drifty doughnuts in the snow.

It’s what’s on the inside that counts

Useful consumer advice: the 2017 Toyota Sienna is now basically the world’s fattest Celica All-Trac. Like that long-ago rally legend, the van comes with all-wheel-drive and decent power, but unlike the Celica, it seats up to eight. Eight imaginary passengers who I imagine are starting to get both dizzy and slightly nauseous. I’ll stop with the doughnuts.

As you may have already deduced from pictures, this is not the newest version of the Sienna. Pictures and details of the facelifted 2018 Toyota Sienna are already out, and the model is set to hit dealerships a little later on in the year.

However, you may want to consider this one, partly because it has most of the mechanical upgrades already, partly because there may be some pretty good deals to be had, and partly because the new one looks like King Kong’s nose-hair trimmer. What are they gargling down there at the Toyota design centre? Have they suffered a hostile takeover by Philishave? How did we go from the practical, slightly frumpy, rock-solid Toyotas of the past to this new generation of angry-faced grille-monsters?

Well anyway. For 2017, the Sienna remains a fairly reasonably and anonymous-looking road companion. This being the XLE model, there are a few attempts made at creating a somewhat sporty or upscale look (18-inch alloy wheels, a stubby rear spoiler), but on the whole the Sienna has all the visual charm of a refrigerator.

And, like a refrigerator, it’s what’s on the inside that counts here. Laid out with captain’s chairs for the two forward rows, the Sienna is the perfect choice for ferrying around taller kids who will likely be highly embarrassed by the experience. The rear seats are also comfortable for taller adults, with the whole boxy package a fair more practical affair than pretty much any three-row crossover.

Installing a child seat for a pint-sized junior tester was relatively simple, although this is a bit of space overkill for a smaller family. With the rear seats folded down, the amount of empty area out back was more than enough to handle the luggage of a multi-week road trip, never mind a simple trip to the grocery store. If you’re interested, that’s 1,100 L of space behind the third-row seats, and a staggering 2,470 L behind the second row. Less good is the fact that the middle-row seats must be removed if you’re doing a big cargo haul, and they are seriously heavy.

In addition, the XLE designation gives the kids their own sunroof, a feature which I’m not sure you’d actually use all that often. Maybe if you’re hauling home the team from hockey practice with all their sweaty gear – every window helps in such a situation.

Also of questionably usefulness in this day and age are the dual Blu-ray widescreens. Any minivan in this segment is going to have to come with some kind of onboard rear-lseat entertainment just to keep up with the competition, but don’t you wish it was optional? Kids these days already have their own portable screens (an iPad mini is cheaper than paying extra for a screen on the roof), and the Sienna is a little lacking in the power outlet department. Skip the rear seat entertainment and add more USBs, please.

Up front, driver and passenger enjoy some pretty comfortable seating, decent visibility, and enough storage space to swallow the gear needed to make an assault on Mt. Everest. Between the glovebox, side pockets, and central cubby, I could probably pack the entire contents of our home pantry for a road trip. Glovebox waffles, anyone?

As far as up front entertainment and direction-finding goes, the Sienna comes with Toyota’s simple, straightforward, usable Entune infotainment. While your neighbour sits in their Lexus, arguing with its fussy trackpad system for the twenty-fifth time, you simply jump into your nondescript minivan, pair a phone, crank up Warren G’s Regulate and peace out.

Granted, any Lexus has the far nicer trimmings inside, especially with the Sienna’s slightly plastic lower dashboard, aging gated shifter layout, and unconvincing wood trim. Both the 2017 Chrysler Pacifica and the 2017 Kia Sedona are nicer in this regard.

However, even at an XLE trim, people are likely looking at a minivan not for its luxury appointments, but its ability to wipe down well and basically take a constant kicking. To that end, the Sienna’s interior seems relatively durable.

It’s really too bad the minivan market is receding, as it’s a fairly unpretentious place to play. The Sienna doesn’t pretend to be anything other than a roomy pair of shapeless jogging pants designed to fit anything your life might hold. It is the exact opposite of the never-gets-dirty Ford Raptor (or equivalent). You could drive around in a machine like this and feel, well, it doesn’t exactly work to suggest you take pride in being modest, but a minivan’s lack of pretense is a refreshing sorbet to the world of entry-level luxury crossover wannabes.

Speaking of driving, time to talk about the wonderful doughnut-making machine Toyota’s tucked under the hood here. The new 3.5L V6 makes a healthy 296 hp and 263 lb-ft of torque, and is paired with a new eight-speed automatic.

In truth, I’m not sure the new eight-speed is an improvement over Toyota’s well-tuned six-speed. There is, at least in the lower gears, a tendency to upshift often, and a general sluggishness. One presumes this is done for fuel economy, and the Sienna’s near-2,200 kg curb weight doesn’t do it any favours.

But if you really jam your foot in the Sienna’s backside, this big galoot can gallop. Instrumented testing from Car & Driver has shown 0–100km/h times in the low-seven-second range, which is about as good as the Ferrari from Magnum P I. [Side note: I once drag-raced a Sienna on a Toyota event – and it was hilariously fun. – Ed.]

As to handling, well, the Sienna is more ocean-going cargo vessel than corner carver. Steering is numb like a 1970s Buick, although overall grip is actually surprisingly good. Curving onramps shouldn’t be an issue, though you won’t love to hustle this machine. But then, neither would your passengers enjoy that. I will also say that the all-wheel-drive system paired beautifully well with Blizzak winter tires, shucking through the slushy melt with ease. 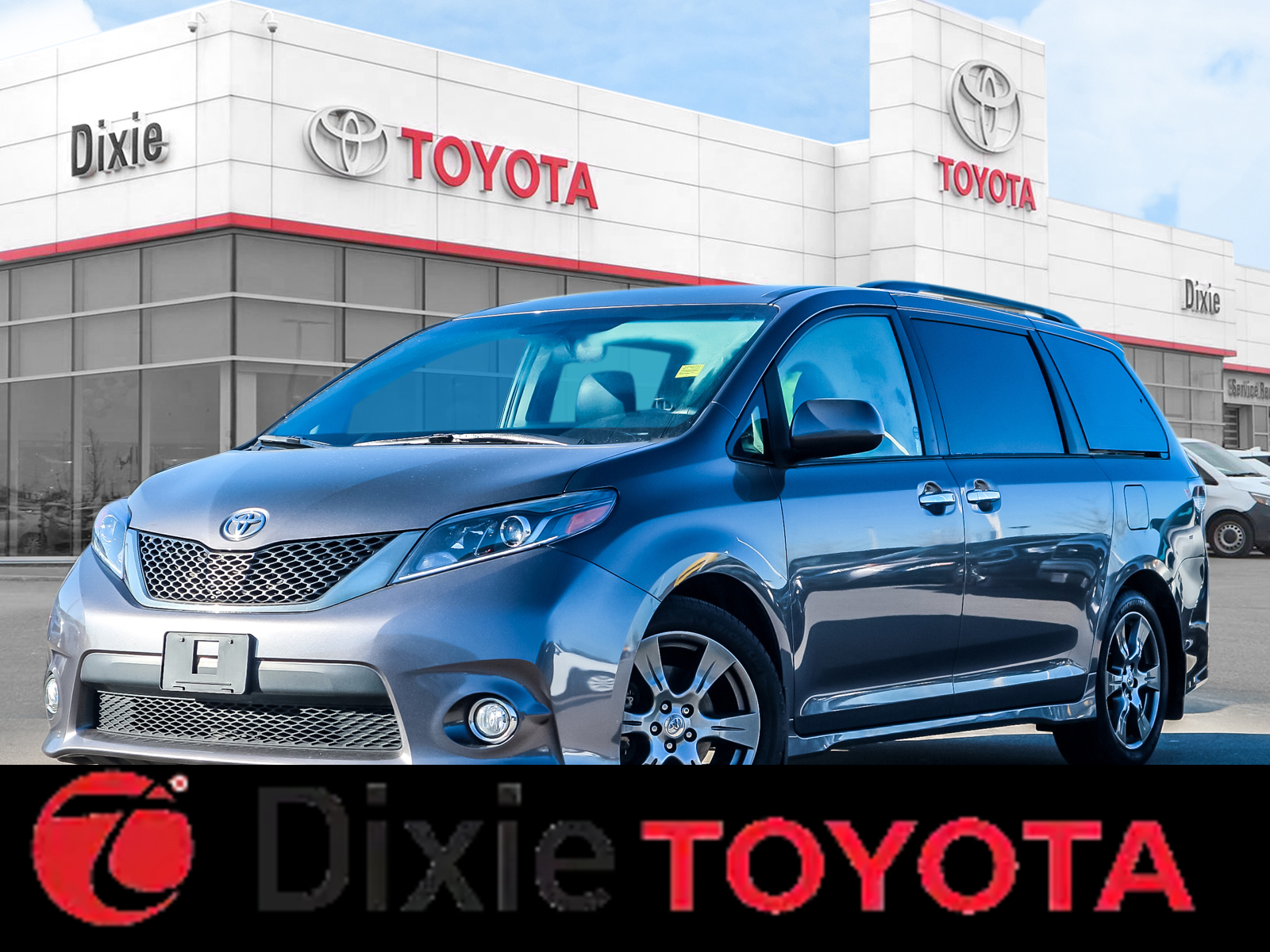 Suffice to say that the Sienna has sufficient engineering below the surface to display some impressive competence, and then a stretchy elastic waistband so you can spread out a little. It has all the sex appeal of a potato, but it is useful, comfortable, and feels built to be trustworthy for the long run. I would rather drive one than some overcomplicated European coupe-styled crossover nonsense, where everything explodes five minutes after the warranty expires.

Even surrounded by snow, the Sienna is anything but cool. But it isn’t trying to be. It doesn’t pretend to be something else, it just does stuff. Stuff like doughnuts. Sounds good to me.

About Brendan McAleer
Brendan McAleer is a Vancouver-based automotive writer, a member of AJAC and a ginger.
Follow me
You may also like
7.5