Hang on to your bits! There’s a new, range-topping 2017 Porsche Macan on the scene, and it’s as magnificent a rocket-ute as exists in the market today.

It’s called the Macan Turbo with Performance Package, and it represents the top-dog Macan where performance and handling and power are concerned.

This one builds on the Macan Turbo with a 40 horsepower increase, to 440 in total. Don’t miss the “Exclusive Powerkit” badge on the engine cover, which references the revised engine management software responsible for the swell in output.

From there, the ride height is lowered, the brakes are enlarged and optimized with slotted rotors, and a standard Sport Chrono package and air suspension with Porsche Active Suspension Management (PASM) technology are all bolted on. Thanks to the deployment of various forms of high-tech knick-knackery like these, the Macan can be dialed into a wide spectrum of drive modes at the click of a button.

Performance capabilities are elevated to levels that border on excess, though core attributes that make even lesser Macan models so compelling are maintained in full. Key amongst those attributes is the Macan’s ability to glide effortlessly between driving styles, and intentions, and conditions, losing nothing in between.

Engage Sport or Sport Plus mode, and in milliseconds a variety of sights, sounds and drool-inducing sensations familiar from Porsche’s sports car model line are dispatched, scratching the same itch for uber-ute handling, performance and noise as other Macan variants, but with sharper claws.

The seven-speed dual-clutch transmission has been recalibrated to do the near-impossible, and shift even faster. It nails perfect gear changes with perfect rev matching, every single time. And you hear the burps and gurgles from the exhaust, and you watch the tachometer needle flitting around at light speed, and you giggle like a fifth grader in the middle of a lesson on tit-mice.

Work the paddle shifters, and the exhaust note ramps up and down faster than Nicki Minaj’s auto-tune machine. For serious, once you’ve seen how fast this thing shifts gears, there’s not much else to see.

The sound from the standard sports exhaust is reedy, deep, and exotic, more so with the factory cutouts open, which improve the rate at which the big-boost V6 exhales, and ramps up the volume and intensity of the howling soundtrack.

Steering is lightly locked on, responds instantly, and allows you direct the Macan’s big grip with minimal inputs at the wheel for a mischievous feistiness that grows as speeds increase. Overall, when pushed, the personality is energetic, eager, playful, and flattering – with sports-car slips and squirms and squiggles communicating the current traction situation nicely to the driver. Most notably? It virtually never feels like it’s struggling to manage its weight, or tossing said weight around, even when having the almighty bejesus driven out of it.

Hang on tight though, as things happen fast when you’re driving this one hard. Thankfully, even the brakes are sports-car precise, and shut the Macan down from high velocities with F-bomb-inducing urgency.

Acceleration? Oh goodness, yes. If, somehow, you find the 340 hp Macan S not fast enough, and even the 400 hp Macan turbo to be a bit lacking, this is what you’re after.

It feels a bit much, for a crossover anyways. At 4.4 seconds, the tester pulls off 0–100 km/h faster than a base 911, or even a Cayenne Turbo. Hammer down, and it feels like you’ve been body-checked into your seat by a monster truck.

And, for a machine so expertly calibrated to melt your face with the authentic sounds and sensations of sports car motoring, it’s a charmingly laid-back thing when a gentle drive is the order of the day.

Cruise leisurely, and the engine prefers to spin under 2,000 rpm, with invisible gearshifts, and generous low-end torque providing plenty of instant thrust before you can feel or hear the powerplant at all. Drive with a light foot, and it feels nearly like an EV, thanks to instant torque at the slightest throttle-prod, and virtually no noise.

Further, with the suspension in its normal setting, the ride is slightly sporty-stiff, but mostly soft and compliant. Set up thusly, the tester rode like a sporty-ish luxury sedan.

Entry and exit are simple, and those drivers upgrading from a previous Macan model will feel right at home. The lowered ride height means there’s more of a plunk down into your heavily-bolstered seat – and from there, you take in the same attention to detail, premium materials, and streams of controls flowing down the centre console. And, of course, the same tachometer, mounted centre stage in the cluster, where it belongs.

Best of all, the styling is discreet, doesn’t shout for attention, and isn’t adorned with a plethora of fake glitz that’ll make fellow motorists wonder if you’re active in the world of pharmaceutical redistribution. And, unlike some comparable rocket-utes, the Macan can fully shut off its high-performance side, and feels a more comfortable and easygoing machine in its standard drive mode than something like, say, the 2017 BMW X4 M40i.

Gripes? Either your writer has the mental capacity of a lentil salad, or the memory seat function was borked, and never worked properly. I’m leaning towards the latter. Further, the climate control system consistently lost its settings and needed to be dialed in again, every time the engine was started.

Rear seats are just adequate for two average-sized adults, though there’s room to spare for two smaller offspring. The cargo hold is flexible, nicely finished, and accessed via a motorized tailgate. Visibility is decent. The steering is light. Maneuverability is good. The central touchscreen is vivid, responsive and instant to react to inputs. All said, when you’re not using its considerable performance talents, this Macan functions bang-on as a daily-driver luxury crossover.

Quite literally, you could drive your grandmother to church on Sunday, then head out for some lapping at the track. While there, even many hot laps fail to see fluid temperatures increase more than a few degrees beyond their highway cruising levels. Heat doesn’t seem to soak the driveline of this machine, even driven hard – referencing the engineering you’re paying for here.

And there’s even an off-road mode that lifts the suspension and locks the AWD split for more traction to help handle light trail work, too. 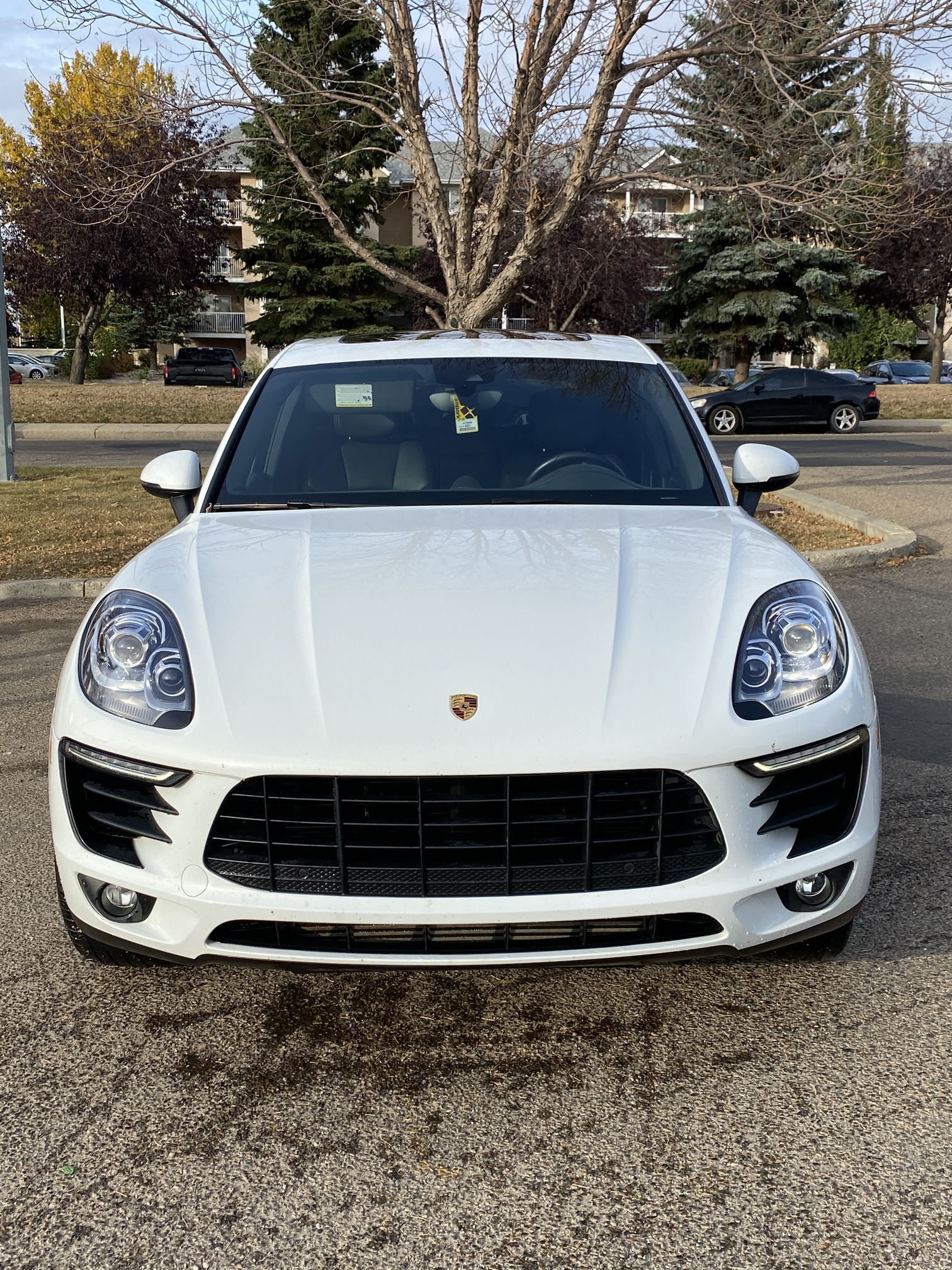 This helps define exactly what this particular Macan variant is: one of the best takes on what Porsche has always built. It’s discreet, potent, highly usable in virtually any condition, and able to transition between driving styles and intentions without compromise. Here’s a high-performance driving tool you can enjoy any day, anywhere, any time.

Probably, Macan Turbo with Performance Package is the best-yet take on applying Porsche sports-car reflexes to a full-function crossover – but you do pay for it. Starting price for the top-dog Macan is $97,000, with the tester’s options bumping that to just under $110,000.

As such, I figure the 340 horsepower Macan S, starting from under $60,000, continues to occupy the value and performance sweet spot in the model range. The Macan Turbo with Performance Package is better – but is it nearly twice as good? No – though it is the better part of twice the price.

Of course, that won’t stop Porsche from selling every copy they make to the fans and anyone after the ultimate Macan, and one of the best Porsche utility models to date.

About Justin Pritchard
Justin Pritchard is an automotive journalist, consultant, TV presenter, and photographer based in Sudbury, Ontario.
Follow me
You may also like
7.9