The 2017 Mercedes-Benz C300 4Matic Cabriolet would be a frontrunner in this class even priced at the top end of the segment.

Unlike many Mercedes-Benz models, which typically price themselves at the premium end of basically every luxury segment, the 2017 Mercedes-Benz C300 4Matic Cabriolet is the first one in recent memory that’s wowed me with its value proposition. Sure, $68K-plus for a four-cylinder convertible is still a significant chunk of change. But after a sunny week in this car, its combination of exquisite styling and interior pampering brought on a new eyebrow-raising appreciation of that as-tested price as exceptionally good value.

This was especially true as my time in the C300 Cab came soon after a week in its close rival, the 2017 BMW 4 Series Cabriolet xDrive, another German four-seat all-wheel drive convertible that promises refined luxury and style inside and out. Even with both testers being sprinkled liberally with option packages and individual niceties, the turbo six-equipped 440i xDrive Cabriolet came in at an as tested price of $91,830: a whopping $23,445 more than the very well equipped C300 4Matic you see here.

It’s true that the BMW 440i Cab tested came with a much more powerful – and M Performance enhanced – turbo inline-six engine (with 355 hp) versus the base turbocharged 241 hp four-cylinder in this drop-top Benz. That extra $23K will net you about a second’s reduction in 0–100 km/h time (6.4 versus 5.2 seconds). Or could cover a bit of tuition for those hopefully appreciative young “adults” in your household or close family.

Extraordinary value – if you’re after a fabric top

A laser-precise German cabriolet comparison would also align engine sizes to either the BMW 430i’s base 248 hp 2.0-litre four (starting at $66,250 for 2018), or the up-level 362 hp turbo V6 in the Mercedes-AMG C43 4Matic (base at $68,900). But based on those two starting prices alone, it’s clear that the Mercedes C-Class Cabs have a clear cost advantage over its main market nemesis at most if not all equipment levels.

This is a distinctly Canadian phenomena, interestingly, as the base MSRP for a ’17 BMW 430i xDrive Cab in the US is within a few hundred dollars of the low $50K-ish starting price of its similarly AWD Benz C300 Cab counterpart. But north of the border – without digging down into the different standard equipment lists of the two rivals – that same BMW, at $66,250, starts $9,150 higher than the directly comparable Mercedes-Benz drop-top we’re looking at here.

Besides the straight dollar difference, the key value distinction comes down to one main buyer preference: the BMW is the only vehicle in this class to still offer a folding hard top, while Mercedes-Benz (and Audi) offer less pricey and less trunk-space-robbing folding soft tops.

The C300 Cab offers a fabric roof, black in this and most cases, that doesn’t have the same sleek, metallic coupe-like roof of the BMW 4 Series Cab, and therefore won’t look quite as fetching when the top is up. Given our Canadian weather, that’s easily the majority of time.

On the other hand, the Benz’s power-operated soft top will perform all the sunshine-friendly tricks that the BMW will, including folding itself up or down at up to 50 km/h, so no worries about how stale the red light is when debating al fresco mode.

And there’s also the handy capability to open the top by holding the fob’s unlock button when pointed at the car, which is an impressive party trick when you’re walking up to the car, especially with folks who are about to jump in the back seat – the lack of a roof makes climbing into those cozy quarters much simpler, though legroom is still more kid- than adult-sized.

Exquisite styling inside and out

With the top dropped on the C300 Cab, a smooth 20-second process, this Mercedes-Benz is easily one of the best-looking luxury convertibles on the market. Until you deploy the AirCap, the movable unibrow windshield header which rises up in tandem with a retractable screen behind the rear two seats, that reduces wind buffeting slightly and attractiveness greatly.

It is an impressive piece of engineering, especially compared to the folding mesh cover BMW throws in the trunk for drivers to manually install on top of the rear seats for the same purpose, pointing to how serious Mercedes-Benz takes passenger and driver comfort in this car. But in practice, any length of time on the highway with it deployed will also likely mean a busy hive’s worth of bugs caught in the attached netting between the elevated windshield header and the top of the windscreen.

Which, again, won’t do much for the feature’s already questionable aesthetic appeal.

With the AirCap largely closed, however, more than a few onlookers guessed this Mercedes-Benz drop-top’s cost at much more than its actual as-tested price. An AMG styling package comes included as part of a Sport package, which also adds 18-inch five-spoke wheels, a chrome-trimmed lower front spoiler, plus little styling flourishes such as rear bumper brake cooling ducts, and large integrated tailpipes which look like boss dual exhausts, but upon closer inspection are actually lower bumper trim elements that help disguise very ordinary-looking twin exhaust tips.

It’s a similar story inside, with rich-looking and -smelling saddle brown leather tastefully contrasting with our tester’s burled walnut interior accents, aluminum trim, and optional Cavansite Blue metallic paint. It’s not the flashiest convertible or colour combination; but there’s a debonair tastefulness about the entire package, especially in bright sunlight.

That blue-blooded personality comes out not only in its dedication to comfort from excessive wind with AirCap, but also to extended cosiness with the top down in as many seasons as possible, thanks to AirScarf. These are two little heavenly vents integrated into each front seat headrest that can blow increasingly warm air around the necks of front passengers, no matter the temperature or wind gusts outside.

Pioneered by Mercedes-Benz, such vents have become so popular on luxury convertibles that they’re now appearing on BMW and Audi rivals as well. On truly hot summer days, one may wish for some cooling capacity to be added to the neck-level vents, but for maximizing vitamin D outside of summer, it’s tough to imagine a more pampering feature for convertibles.

Both the power top and the AirCap functions are controlled by buttons in between the front seats, just behind the C300’s touch-sensitive handrest for the rotary dial controller.

Also contributing to interior comfort is a front seat that can extend out its lower thigh support, which initially feels somewhat strange until you hop back into a car with overly short seat cushions.

This tester came with an optional Burmester surround sound system, which can easily drown out any nearby diesel rattle-monster. Other optional amenities included an integrated garage door opener, a 360-degree camera that increases visibility especially with the top up, and Active Parking Assist that can twirl the wheel and the car into a tight spot. There’s also a swivelling LED Lighting system and an Adaptive High-beam Assist (AHA) system that can automatically lower your high-beams when it senses oncoming vehicles, then automatically relight them when they pass.

From a driving perspective, this emphasis on easy comfort through advanced technology can be seen in the availability of Benz’s advanced air suspension, as well as offering what the company calls the quietest interior in this segment, which certainly rings true with the snug fabric top in place. Even the leather is specially formulated to reflect heat, though most pricier Benz drop-tops go a step further with actual ventilated seats.

Once moving, the turbocharged four is a subdued driving partner until you work the nine-speed automatic transmission with the standard shift paddles with gusto, where it emits a refined yet hardworking high-pitched song in the upper rev ranges. The flat-bottomed steering wheel along with the AMG trim bits promise at least a hint of performance paprika to the C300 Cab’s road manners, with Sport and Sport Plus modes available from the centre console’s Dynamic Select toggle, which also offers Eco, Individual, and the default Comfort mode.

There actually is a noticeable difference in throttle response and suspension firmness in these escalating sporty modes, although it’s clear that Mercedes saved most of the driving excitement for the various AMG versions of this drop-top that are available as well. On top of the aforementioned mid-level Mercedes-AMG C43 4Matic, there are also two rear-drive versions of the V8-powered C63 Cab: the 469 hp base model for $85,000, and the 503 hp C63 S, which starts at $93,700.

Granted, neither of those models will produce fuel consumption numbers anywhere close to the C300 Cab’s official combined average of 9.5 L/100 km. And I actually saw better than that in real-world driving, with a dash reading of 9.1 overall. That figure lands it right in between the base BMW 430i Cab and the Audi A5 Cab Quattro, its prime market rivals, after the disappearance of the Lexus IS convertible and Infiniti G37 Cabs, both of which happened to be hard-top convertibles.

Refined and stylish luxury, with healthy dose of value and practicality

Folding hard tops tend to eat up loads of cargo room, with the long-departed Infiniti folding hardtop infamous for its tiny and near-inaccessible cargo bay. In contrast, the C300 Cab is the Honda Accord of the cabriolet world when it comes to practicality. The trunk offers a healthy 360 litres worth of space when the top is up, while the stowed top reduces that amount to a still healthy (for a convertible) 285 litres.

The rear seat also helps with flexibility, as there’s a ski/golf club pass-through between the rear seats, in case you’re travelling with four folks on board. One or both seats can be folded down individually, unlike in the 3 Series Cab, where the rear seats fold down as one single piece. 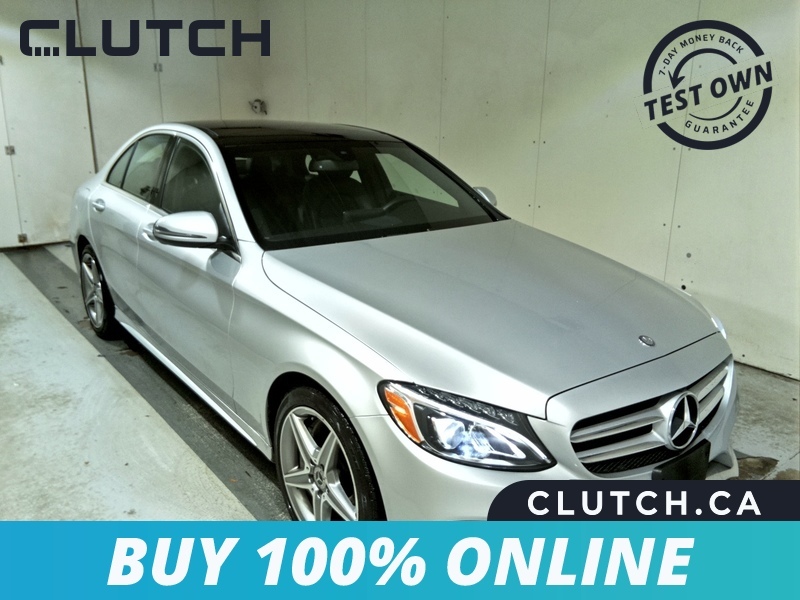 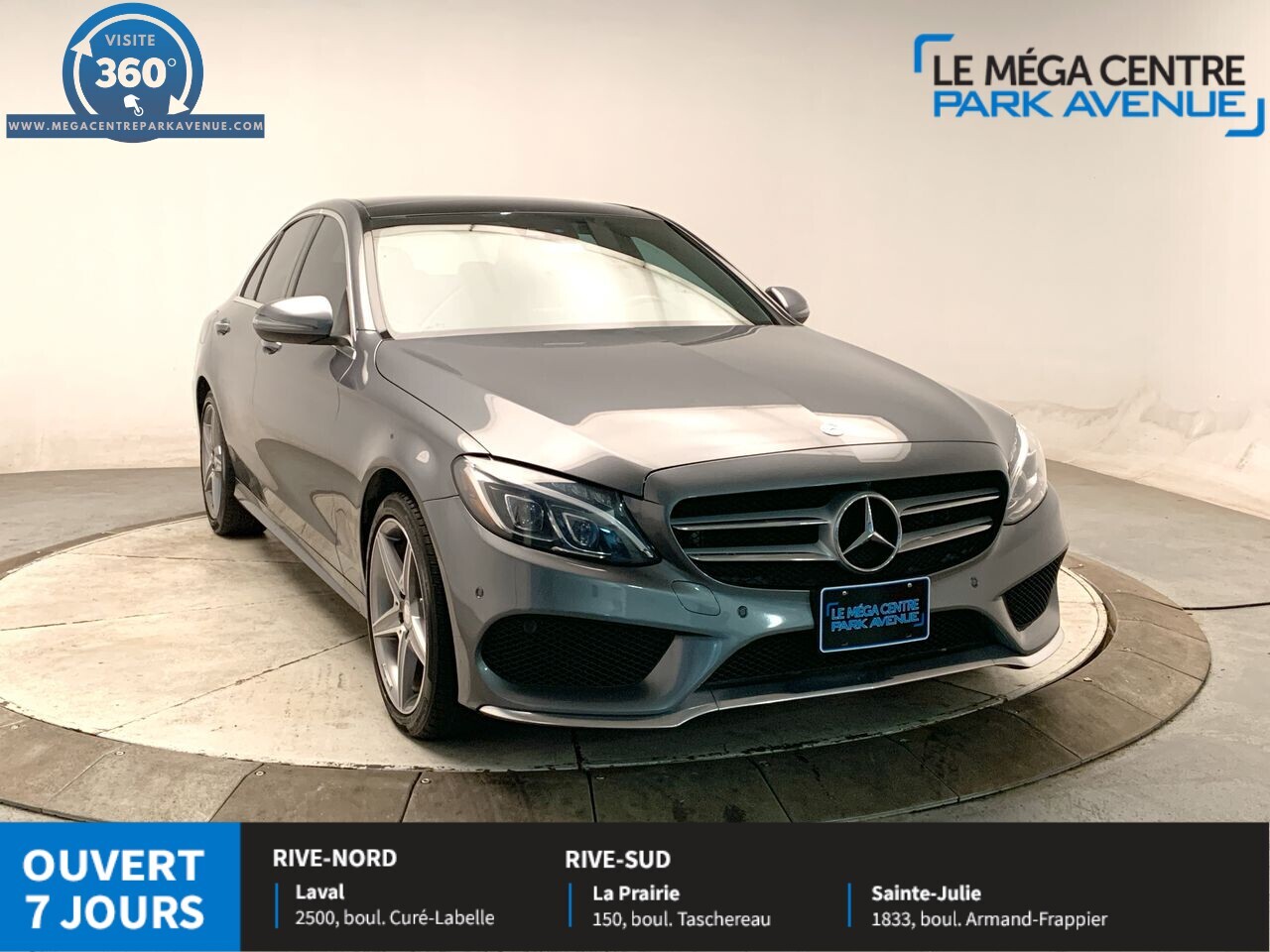 Up front, a motorized seatbelt guide extends to hand the driver the belt for easier access; while prominent seatback latches make it easy to fold those front seats forward, where a motor then powers them forward to help aid entry into the rear seats.

All put together – the (relative) practicality, the impeccable refinement, and the stylish comfort provided by the – and it’s clear that 2017 Mercedes-Benz C300 4Matic Cabriolet would be a frontrunner in this class even priced at the top end of the segment. Factor in its relatively low starting price, and there’s a good reason to start your luxury four-seat drop-top shopping with the C-Class Cab.

About Michael Bettencourt
Michael Bettencourt has been writing about cars and automotive topics for over 25 years, with over two decades as a member of the Automobile Journalists Association of Canada (AJAC). A journalism graduate of Ryerson University, he has won multiple awards for technical, vehicle testing, and green vehicle writing. Currently a judge for the Electric Vehicle Dealer’s Association awards, he bought his first EV in 2011, and follows the EV industry closely.
Follow me
You may also like
8.4