One of the most memorable cars I’ve driven was a Fiat, if you can believe it. I’m not even talking about the quirky 500 microcar; that was interesting, but when I tested it, I knew somewhat to expect. I’m not talking about the diesel-powered Punto I drove in Italy, either; that was memorable, if not so much for the car. It’s not a bad car, by any means, just not all that interesting of a car.

This is one very cool-looking little crossover.

The memorable Fiat drive I’m speaking of was the 500L, when it arrived here for the 2012 model year. Trouble is, it was memorable for all the wrong reasons. The ergonomics were as awkward as the styling, the engine just didn’t seem well-matched to the car and the build quality was lacking as it demonstrated my personal automotive pet peeve: the feeling there’s a window open when there really isn’t, caused by weak window seals. It was a major disappointment for me, as I was really looking forward to seeing what Fiat could do in North America with a car a little less niche than a supermini, and was really hoping the “L” in 500L didn’t stand for “loses the original 500’s retro cool” – but it did. Which was probably the biggest disappointment of all.

Fast forward to today, and this test of the 2017 Fiat 500X. Right off the bat, the first thing I have to ask is: why did we have to sit through the arrival of the 500L before we got this? It’s not perfect, but it’s a big step up and there are a number of yummy details that do their best to make us forget that flawed effort when it came to Fiat’s mainstream model.

On looks alone, Fiat is off to a good start. While the 500X technically shares a platform with the Jeep Renegade, you really wouldn’t know it by looking at it. Unlike the 500L, the X manages to keep the 500’s flare by sticking to rounded head-, fog- and taillight lenses, surprisingly curvy body panels, and other neat-o details like funky two-tone rims and classic Fiat “moustache” grille. The Rosso Passione (which for some reason translates to “Hypnotique Red”, according to Fiat) exterior colouring is the cherry on top. I’m just going to come right out and say it: this is one very cool-looking little crossover.

Better still, my tester was the FWD Sport trim, which is one step up from the base and can be had for less than 25 grand, assuming you’re willing to stick with the six-speed manual transmission. That’s the standard for the first three trim levels – Pop, Sport and Trekking – as is FWD. You can add AWD to all but the most basic trim, though it will cost you around three grand to do so, and it means you’ll have to say goodbye to the manual transmission in favour of FCA’s oft-maligned nine-speed automatic.

Would you miss said manual? Tough call. I’m a big fan of a good manual transmission and a big fan of the added sportiness they often provide, but that doesn’t mean I need to have one in my day-to-day compact crossover. In fact, I’d probably opt for an auto if I was ever to own a vehicle like this.

Thing is, the manual transmission in the 500X is actually pretty good. Clutch take-up is a little spongy, but the gears are slotted home with precision and the ratios are well-spaced to get the most out of the 160 hp made by the turbocharged 1.4 MultiAir four banger in our tester. The 185 lb-ft of torque it also makes, meanwhile, is actually more than what’s on offer from the other available engine, a 2.4L good for 180 hp and 175 lb-ft.

And it’s that torque that really gets you going in the 500X. Peaking at a lowly 2,500 rpm and staying around until 4,000, it gets the 1,356 kg Fiat moving along in a manner more befitting of a compact hatch than a subcompact crossover. I was surprised to find how loud it was inside, though. For an engine that doesn’t have to rev so high, there was a little more powertrain vibration than I would have liked.

There are also selectable driving modes that affect your throttle and steering response, if you can believe it. One of these is a Sport mode, designated by a checkered flag icon on the drive mode select wheel. That may be a little brash – this is by no means a race car – but the sharpened throttle take-up and weightier steering is noticeable, which is a nice surprise.

Back to that “feels like a hatchback” thing which, I guess, is where the 500X really starts to strut its stuff. It starts to do so as soon as you take a seat in the driver’s chair, and get the distinct feeling that you’re sitting in something much lower, much more athletic than what a crossover should be. A word of caution however: while the steering wheel does tilt and telescope, those of us with long legs and shorter arms may wish for a little more reach for the wheel. It’s not drastic, but it was enough to get me thinking and that’s often a sign that some work needs to be done.

What ended up happening is I had to sit slightly closer to the wheel, a boon for the people sitting behind me if not for my poor legs. Indeed, the 500X’s compact dimensions mean some space had to be sacrificed back there; the Mazda CX-3, Honda HR-V and Nissan Qashqai all have more rear seat legroom than the 500X. At least the rear seats fold nice and flat with the flip of a single lever, though at 563.5 L, you don’t get a huge amount of space back there even with the seats down.

None of those competitors have quite the flair when it comes to interior design that the Fiat does, however. The colour-matched dash inserts are a great lift from the 500 and while it doesn’t get the single-gauge treatment the 500 gets, the deeply recessed gauges are pretty classic in their styling. The (somewhat) flat-bottomed steering wheel, meanwhile, is a nice finishing touch. Do you need a flat-bottomed wheel in your 500X? Probably not, but screw it. If VW can put one in the Beetle and Nissan the Rogue, I have no problem with its making an appearance here.

Much more applicable to the buyer group for a car like this is the infotainment system and luckily for the 500X, it’s part of the Fiat Chrysler Automobiles conglomerate and so has been given access to one of the better systems in the biz. It’s called Uconnect here as it is elsewhere, and it continues to provide an intuitive interface, sharp graphics, and loads of features. The rest of the major players in the industry are only just catching up with Uconnect now, which is pretty impressive considering how long the system’s been around for. Unlike other Uconnect applications in the FCA world, however, you don’t have to make use of the touchscreen in order to activate your seat heaters, often a problem when you have gloves on (as you would): just press a button mounted at the base of the centre stack. Perfect, and oh-so-simple. They do come as part of a $1,295 option package on the Sport trim, however. The screen in our car is also the larger of two available, measuring 6.5 inches as opposed to 5 as standard. $1,100 gets you the bigger screen as part of the Navigation Group, which also provides Sirius satellite radio.

The entertainment options on our car don’t stop there; the Beats Audio speakers in the trunk? Those’ll run you an additional $995 and while they do sound good, to have to spend additional money over the Navigation Group for better audio is a little annoying. Same goes for A/C, which only comes as part of a $1,295 option package when much of the competition offers this as standard. You can’t even get it on base Pop models, just like you can’t get leather seating on our model as it starts on the Trekking, for a $800 premium. 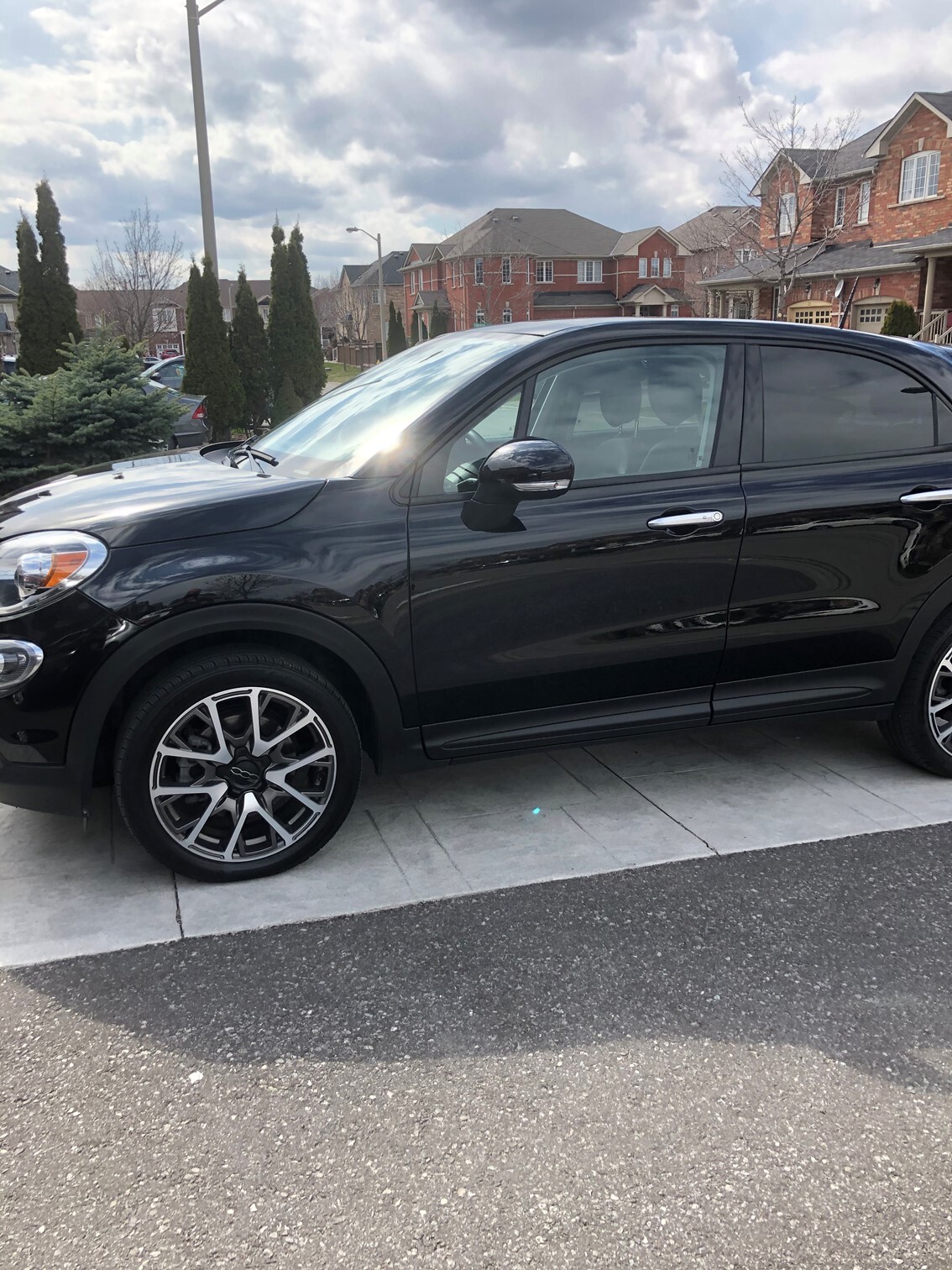 I guess therein lies the main problem with the 500X: an identity issue. Being such a small player in North America, Fiat needs to get lots of mileage out of the few models it does produce. That’s why you see both an entry-level 500, a luxurious top trim, a convertible, and a sporty trim on top of that. With the 500X and its Trekking alternative, the question becomes whether or not as a brand, you’re aiming for active families or older empty-nesters that may have fond memories of the Fiat name.

It’s nice that there are 500X options for both of these groups, I just fear that it’s too much of a dilution of the model and people aren’t really sure what they’re looking at. Is it a luxury-lite alternative to the Mini Countryman or Buick Encore, or simply a less butch – but still capable – version of the Jeep Renegade, and nothing more? Bottom line is, as fun as the drive was, and as nice as it is too look at, I’m not sure if I’d be swayed from more well-known brands such as Honda and Mazda, especially when you consider the “Fix It Again, Tony” stigma that continues to surround the Fiat brand to this day.

Is that unfair? Perhaps. But that’s the thing about stigmas.

About Dan Heyman
Dan Heyman is a car guy through-and-through, ever since his first word was “Toyota”. Dan has worked as a full-time automotive journalist since 2010.
Follow me
You may also like
7.1