“This is the most important vehicle we have ever launched,” said Christian Meunier, Global Division VP of Infiniti Marketing and Sales at the launch on the eve of media day at the 2017 Los Angeles Auto Show.

This may just be the best-looking entry into the segment...

It may seem hyperbolic, but when you consider the goings-on in the segment in which the all-new 2019 Infiniti QX50 will be competing, you can see why there are such lofty expectations for it.

You see, the D-segment – or “compact” – luxury crossover segment is one of the fastest-growing in both the US and Canada; vehicles in this segment make up 34 percent of all luxury sales in Canada, according to Infiniti. That’s major, and you can see why the brand needs to make it priority numero uno to get this vehicle right.

And it starts with some engine tech that Infiniti has been developing for 20 years: a variable-compression, turbocharged four-cylinder plant.

Thanks to an actuating arm – or “Harmonic Drive Motor” in Infiniti speak – mounted beside each cylinder, the turbocharged VC-Turbo ’plant is able to switch between traditional and Atkinson combustion cycles, enabling a transition from 8:1 to a 14:1 (!) compression rating, depending on the way the car’s being driven and which drive mode has been selected. By doing so, Infiniti can ensure that the right amount of efficiency and power delivery are achieved, without bothersome knocking effects that often burden high-compression engines. It’s all done to the tune of 268 hp and 280 lb-ft of torque, by the way.

That’s some pretty skookum stuff, especially when you consider that FWD models in the US have shown 27 mpg – about 7.5 L/ 100 km – in preliminary fuel testing. Power is delivered to the wheels via a shift-by-wire version of Nissan/Infiniti’s venerable Xtronic CVT box. Switching to shift-by-wire means more cabin room and a larger centre armrest, as there’s no need to house traditional bulky transmission linkage.

Speaking of “by wire”: this also applies to the steering system, which gets the tech originally employed in the Q50 sedan and its Q60 coupe sibling. This marks the first time the tech has been seen outside of those two cars. Put simply, actuators listen to driver inputs and transmit said information to the front wheels. This allows for numerous driver-selectable steering weight and sensitivity settings, as well as automatic on-the-fly adjustments. It’s a tech that has been a bit divisive in the performance sedans where it originated, but less so in a crossover like this.

Then again, when you consider the fact that the numerous electronic driver aids that have been refined for this latest version of Infiniti’s ProPilot Assist safety suite (“the next step to full autonomy,” according to Meunier), QX50 drivers may just want to take their hands off the wheel and let the computers have at it. Lane-keep assist, adaptive cruise, and blind spot assist are all on-hand to make sure, well, you don’t have to actually use your hands – we don’t recommend that practice.

Of course, the road may be the last thing on drivers’ minds, if the quiet ride and passenger comfort additions are any indication. The windshield and front side windows have been given acoustic laminate, while an active engine mount is on-hand to reduce vibration. The engine architecture itself, meanwhile, reduces said vibrations even further.

If that’s not enough, then a host of luxurious cabin additions will sweeten the deal. The interior shown at the LA Show preview (pictured here) was that of the top-spec Autograph edition, a never-before-seen trim at Infiniti. Diamond-print stitching (that actually wraps around the front of each cushion – nice), blue suede inserts (your only choice), and brushed aluminum-lookalike accents complete the package, which can only be had with ivory as a base colour. Luckily, the leather has been treated to avoid annoying scuffs from jeans and the like. If all that seems familiar, it may be because this colour combo debuted on the QX50 Concept at the 2017 North American International Auto Show in Detroit. I loved the palette then, and it’s nice to see it make the transition to the production model almost a year down the road.

The rest of the QX50 follows in a similar vein: the production model sports many of the exterior features seen on the concept. The big grille, deep character lines just below the side windows and above the front fenders as well as an exaggerated version of Infiniti’s trademark crescent-shaped D-pillar have all made the transition from concept to production, and we are grateful that they have. No detail has been spared; in order to make that great crease over the front fenders work, a special and somewhat unorthodox hood hinge had to be developed. That’s the kind of detail you love to see and while we’ll have to wait until we see the QX50 out from under the show lights on the open road, it’s hard not to think that this may just be the best-looking entry into the segment, this side of maybe the Volvo XC60. It’s that good.

Back to the interior accoutrements.

More than looking the part, the seats are comfortable, too, with the rears sliding fore and aft in a 60/40 split to either accommodate longer legs, or longer cargo items if you don’t want to fold them flat. They also offer more room than either the BMW X3 or Audi Q5, two of the biggest sellers in the segment. By engineering the QX50’s all-new platform to work exclusively with a four-cylinder engine, Infiniti was able to move the firewall forward to ensure that there’s more room inside the ’19 QX50 than there is in the current model (in every aspect but rear legroom, which is slightly less in the new car), even though the latter is longer overall and has a longer wheelbase. That means an easier drive in tighter situations without sacrificing passenger comfort.

At 994 mm with the optional full-length moonroof, the rear headroom is one of the most impressive aspects of cabin comfort. There’s no way a CUV that looks this sleek should have as much room up top as it does, but thanks to some clever packaging, seat design, and seat mounting, Infiniti has managed to pull it off. So much so that most adults will be comfortable back there.

In addition to all the driver aid tech we spoke about earlier, the QX50 also gets Infiniti’s proprietary InTouch infotainment system, which makes use of two monitors stacked atop one another (the higher one measuring 8 inches; 7 inches for the lower) for all your infotainment, communication, and drive mode needs. It may be a little much to handle for those that are averse to a touch-heavy set-up, but they will be happy to find banks of traditional buttons on either side of the lower screen for all your climate control needs, meaning they can be more easily operated with gloves on during cold Canadian winters. Audio, meanwhile, comes courtesy of a 16-speaker Bose setup. 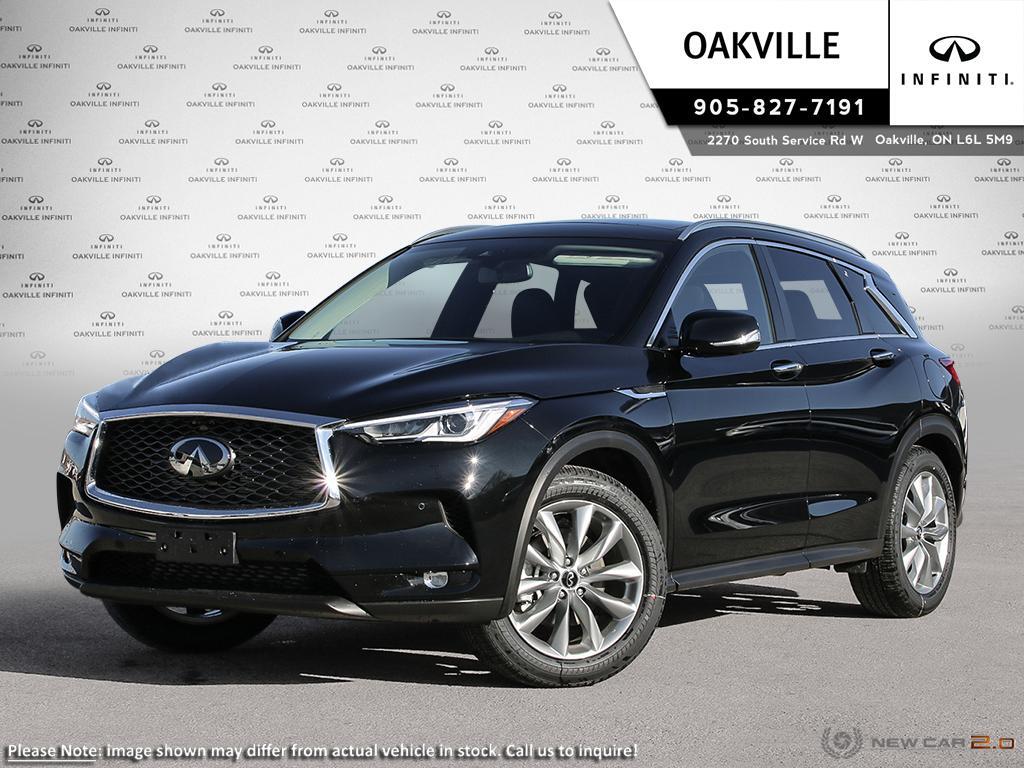 It appears that Infiniti has taken the challenge of the D-segment luxury crossover very seriously with the QX50. On paper, it’s got the styling, the tech, and of course the powertrain to match the best the segment has to offer. All we have to do now is drive one to see if it’s got what it takes, and we’ll have the chance to do so early next year.