In one of the most anticipated events at the 2017 Los Angeles Auto Show, the 2018 Jeep Wrangler made its official debut on the show’s second media day. Known to enthusiasts as the “JL”, it marks the next step in the evolution of the iconic off-roader, with a focus on efficiency.

A collective gasp was let out in the packed press conference when that news came down, and I’m fairly certain I heard some soft sobbing from somewhere in the back.

If you’re going to increase efficiency, you often have to decrease engine size, and so it goes that for 2018, the Wrangler will be available with two engine choices: the 3.6L Pentastar V6 returns (it makes 285 hp, and 260 lb-ft of torque but is now available with standard auto stop-start), but it’s now joined by a 2.0L turbo four-banger, good for 270 hp and 295 lb-ft of torque.

Jeep is also calling the four-cylinder motor a “light-hybrid”, as it stores energy which it can then use to produce torque to help alleviate turbo lag. The 3.6L comes standard with a six-speed manual but can be fitted with an all-new eight-speed auto, which is your only choice on 2.0L models.

If you can believe it, it doesn’t stop there.

During Wednesday’s announcement, Mike Manley, President and CEO of Jeep, also dropped the bomb that the Wrangler will be getting – wait for it – a plug-in hybrid version for 2020.

A collective gasp was let out in the packed press conference when that news came down, and I’m fairly certain I heard some soft sobbing from somewhere in the back. We’ve heard the line many times before – “It’s a Jeep thing” – and up until now, a PHEV was most definitely not a Jeep thing and if it’s not a Jeep thing to a Jeep person, well, it may as well not be built at all, right? Well, obviously not, because a plug-in Wrangler is coming, it will be as capable as the current model, and that’s all there is to it.

“Electrification is undeniable across the industry,” said Scott Tallon, Director of Jeep at FCA. “We have the technology in-house today, and electrification of the Jeep-brand models going forward will be an important part of the business. The key is doing it in a very authentic Jeep way, such as a 4WD pure-EV mode.”

Styling-wise, it is a subtle evolution. After all, when you’ve refined and honed a design so precisely over the years – and developed quite the following thanks in no small part to that fact – you aren’t going to change that much.

And yet, this update was a strenuous one, according to Ralph Gilles, head of design at Fiat Chrysler Automobiles.

“The designers treated every detail like a thesis,” he said. “For every compromise we made for better aero, we had to gain aesthetic.”

They also did their best to listen to current Jeep owners to see what they want done with the new vehicle by travelling to Moab and the annual Jeep Jamboree there. 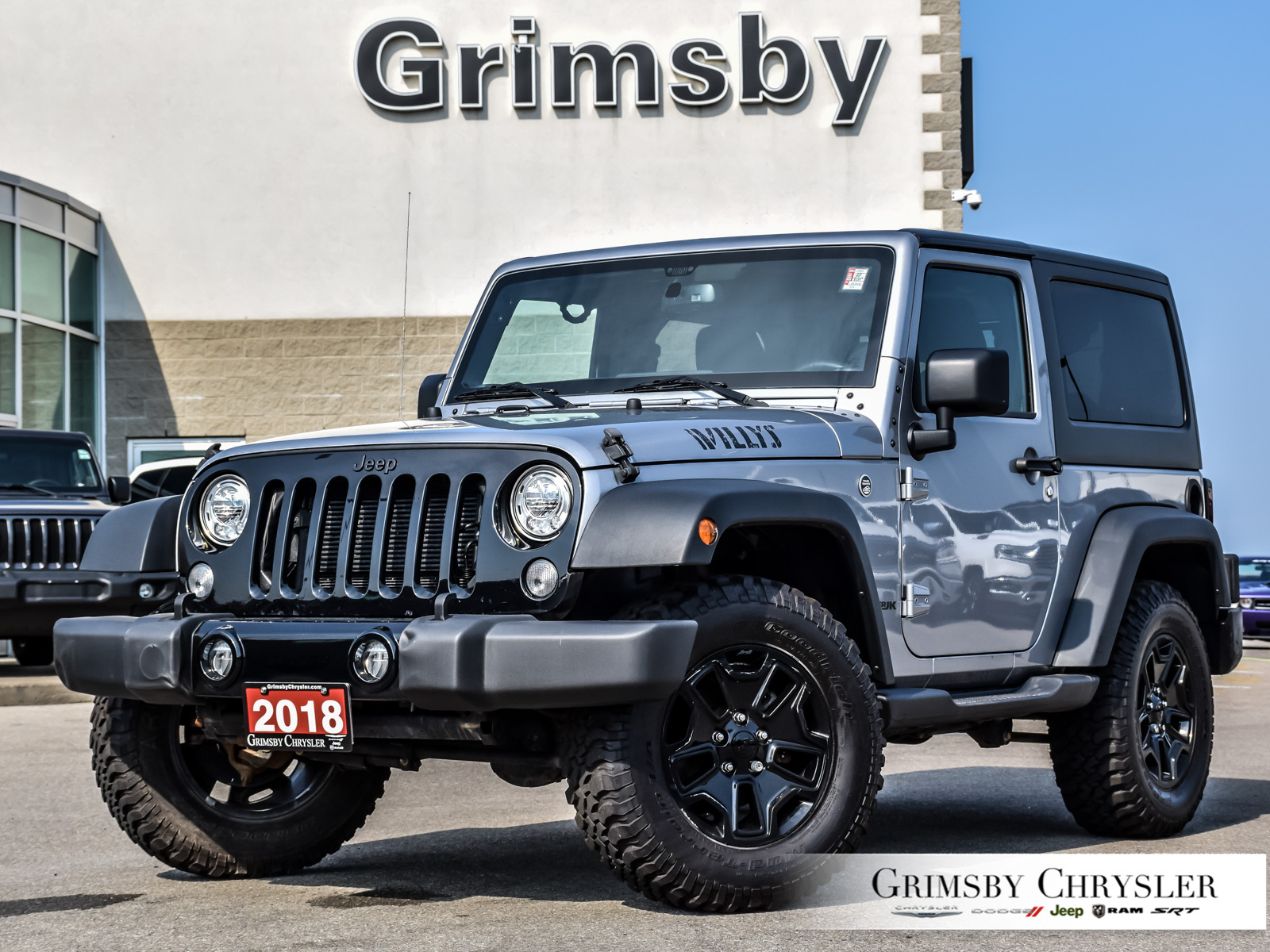 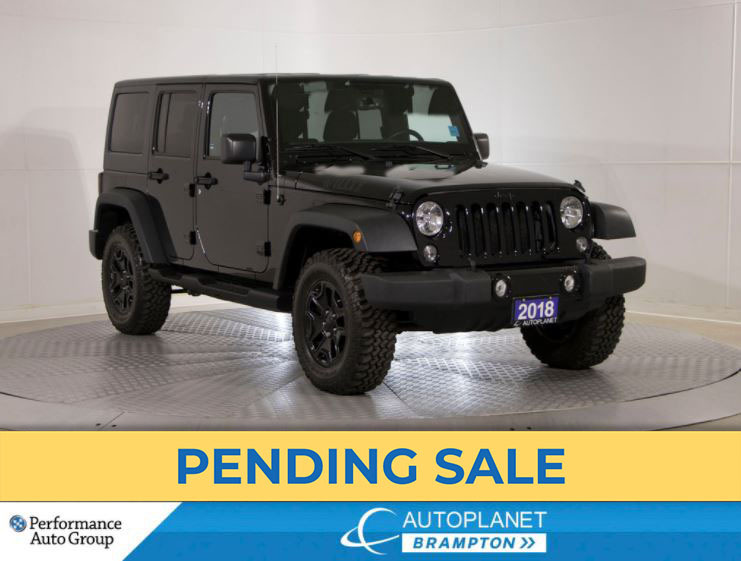 “We see a little of that customer interaction with the Challenger and Charger models,” said Gilles. “But it’s nothing like this.” Best ensure they’re happy, then.

That’s why while the trademark keystone grille looks familiar at first blush, a closer look reveal that each bar is slightly angled at the top, for better aero. Same goes for the corners of the hardtop roofs (there are two styles of this, as well as two soft-top treatments), which have been rounded-off again to reduce drag. Every body and glass panel is all new and 2018 sees extensive use of aluminum in the body panels. The doors, hood, and fenders are all constructed from the lighter material, while the classic barn-door-style tailgate returns, only now it’s crafted in a mix of aluminum and magnesium.

Speaking of the tops: they are now much easier to operate, with the windows no longer needing to be zipped in. Instead, they operate on rails so you no longer need about 12 pairs of hands to fold your roof.

So, while the grille, roundel headlights, big fenders, and squared-off corners are all very reminiscent of what’s been seen previously, the new vehicle is more aerodynamic to the tune of a nine percent reduction in drag. Even the good ol’ rough ’n’ tumble Jeep has to be a slave, somewhat, to the efficiency gods. Then again, if you ask Jeep, it’s always been that way.

“Jeep has always been about capability, utility, and overall efficiency,” said Manley. So, while it’s great that this latest Wrangler gets an improved crawl ratio, if you’re guzzling gas these days, it just ain’t worth it.

Aero, of course, is only part of the battle. Hence, the electrification. But will that hurt the Jeep’s capability?

According to Tallon, the PHEV Jeep has gone through the very same heavy-duty weather and environment testing that all other Wrangler models do. They’re 100 percent serious that Jeep people will have nothing to complain about the PHEV. Plus, it may bring previously undiscovered buyers to the model because – let’s face it – it’s never been a fuel economy star.

Of course, it’s always been an off-road star, and there’s no question that will continue to be the case in 2018.

Two 4WD systems are offered: Command-Trac and Rock-Trac. The former offers a two-speed transfer case as well as a 3.45 rear axle ratio, while the Rock-Trac system on Rubicon models gets a 4:10 ratio rear end as well as improved wheel articulation and improved 77.2:1 crawl ratio. As has always been the case, being able to go rock-hopping in your Wrangler is going to be one of the main attractions.

Thing is, there’s a lot more going on with the new Wrangler in another area that hasn’t always been its strong suit: creature comforts.

Finally, after what seems like eons, the Wrangler gets a telescoping steering wheel. We’ll also be seeing the fourth generation of FCA’s very good Uconnect infotainment system with a full eight-inch display (a five-incher is standard on base Sport models, and there’s also a 7.0-inch system available), as well as a back-up camera and Android Auto and Apple CarPlay support. Add the arrival of safety features like blind-spot monitoring and rear cross-path detection, and you’ve got a Wrangler that’s as close to a more traditional SUV as it’s ever been. There’s even an optional digital gauge cluster. A TFT gauge cluster in a Wrangler. No joke.

Isn’t that risky, though? What about all those Wrangler fanatics who want nothing more than to be able to climb even steeper hills or ford even deeper streams?

Well, yes and no, according to Tallon.

“You have to do it in a way that adapts to those people’s lifestyle,” he said.

“What we can do with that technology is leverage and do a full suite of off-road pages for the enthusiast,” he said. “Now they can see the pitch, the roll, the articulation of the wheels, the traction, where they’re putting the power down, how much… that is going to be the benefit for them.” Think of it as the Performance Pages found in those other vehicles aimed at enthusiasts, the SRT versions of the Challenger and Charger.

“Plus,” he added, “everyone can enjoy CarPlay and Android Auto. Plug your phone in and you’ve got navigation, music, everything you need right at your fingertips.” Hard to argue with that.

It’s also hard to argue with the fact that this particular vehicle, which is so important to get right, looks the part both on paper and in the metal. What will be really interesting to see is if all the added safety features and tech will do their part to both keep current Jeep people interested, as well as attract new buyers to the brand.

Look for pricing closer to the release of the Wrangler JL in the first quarter of next year.