There’s something indefinable about Italian vehicle design – and Alfa Romeo styling in particular – that tugs at the heartstrings like a basket of playful puppies.

Even for enthusiast folks that consider luxury all-wheel-drive wagons or upscale hatchbacks as the ultimate combination of visual appeal, sporting ability, and sumptuous practicality – as Yoda would say, “Wise, they are.” – the all-new 2018 Alfa Romeo Stelvio is alluringly proficient enough in all these areas to challenge that long-standing premise.

It has actually been a good couple years for seductively styled small SUVs, with Jaguar jumping into this market with their F-Pace for the 2017 model year, and now FCA-owned Alfa Romeo expanding its product offerings with this all-new 2018 looker of an all-wheel-drive high-riding hatchback. Okay, fine, luxury SUV or crossover, if you must.

In comparison, rivals from traditional luxury makers like the BMW X3, Mercedes-Benz GLC and Audi Q5 seem notably stodgy, with the Porsche Macan landing between those two groups in the design adventurousness department.

The Stelvio’s come-hither design is perhaps its clearest advantage over its mostly conservative rivals. The subtly flared fenders are met by muscular hood bulges, while the standard integrated spoiler and short rear overhangs add to the provocatively low-profile 255/45 all-season tires available on gorgeous 20-inch wheels on the Ti. Smartly integrated aluminum exhaust tips at each corner finish off the look at the rear.

As good as the overall package looks, the Stelvio’s distinctively large inverted triangle grille shoves any front-mounted plate (as in Ontario) somewhat awkwardly to the driver’s side. Alfa is so proud of that grille, the company includes the Alfa Romeo shield grille in their list of standard equipment.

This particular Stelvio tester was a nearly fully loaded Ti Sport model. It adds some welcome visual pop to the base Stelvio, which starts at $52,545 and comes with standard issue 18-inch wheels that are much less aggressive on the looks and handling side, but likely better on comfort, with its 60-series tires. The Ti Sport’s $54,995 starting price includes not only the larger and snazzier wheel/tire combo, but also red/black/yellow brake calipers, leather-faced sport seats, sport-tuned front dampers, and aluminum pedals.

Plus just about the largest steering-column-mounted paddle shifters you’ll find on any SUV, and perhaps in the business.

What that Ti Sport’s $55k base price didn’t include was this tester’s Rosso Competizione tri-coat paint, which costs a princely $2,500, or as much as the entire Sport package.

The Stelvio’s chic exterior charm doesn’t extend nearly as much to the interior, either stylistically or ergonomically. It’s a sleek but overwhelmingly black cockpit, with some muted aluminum bits and dark grey oak wood trim, and not quite as modern or luxurious as one may fairly expect for its $67,485 as-tested price. For example, the three rotary knobs for climate controls are simple and easy to use, but do look a little downmarket. Buttons for heated seats and steering wheel nestled between them and just above the cupholders are welcome standard niceties, but not always easily accessible if you have travel mugs or larger bottles.

The top Lusso trim offers lighter wood accents and cream-coloured seats that may help alleviate the somewhat sombre furnishings, but the large dual-pane panoramic sunroof as equipped here at least helped bring a bright airy feel to the cabin during some bright but polar-vortex-cold weather, even to those in the rear seats.

There are a few examples of luxury inexperience, or an absence of the attention to detail that established luxury brands have long since polished. Let’s take parking sensors, for example. Not only does it not stop the rapid beeping at you when you put it in Park, and are therefore no longer moving, it doesn’t even stop after you turn off the ignition. Plus if you parked extra close, or someone else settles in close to your bumper after you leave, the parking sensor starts up its solid beeeeeeep as soon as you turn on the ignition, even while still in Park.

I thought for sure some snow or slush had coated the sensors to induce this over-sensitive state, but it happened a few times on clear days, and even in dry underground parking lots.

Also, the controller knob in between the front seats operates a usefully large screen with easy-to-understand functions, but it doesn’t have the touch-sensitive smarts of many of its German rivals, which allow for advanced functions like writing in addresses or numbers with your finger without looking. Even scrolling through radio stations with it was a little more complicated than most, making the steering wheel functions most appreciated.

Comfort-wise, the Stelvio is first-class, with plenty of head- and elbow-room up front, plus a handy lever under the front seats to adjust thigh support. Space is notably tighter in the rear, as with most in this class, but scalloped front seatbacks provide some extra knee-room to rear seat riders.

Cargo room is also notably spacious, at 525 litres, besting the Macan’s 500 L. Sadly, however, that cargo area can’t be accessed hands-free with a foot swipe function under the rear bumper. This may seem frivolous, but in messy winter conditions, even with nothing in your hands, it’s nice not to have to touch the potentially grimy latch, located just over the rear licence plate. Plus it’s a function available on multiple non-luxury compact SUVs these days, losing it practicality as well as value points.

On the other hand, this Stelvio Ti Sport’s ride is on the opposite end of the comfort spectrum – not as crash-bangingly painful as an F-Pace on its most aggressive tires, but sharp enough over bumps and potholes to feel more like a sport sedan than an SUV. The reward for this ride firmness is impressive body-roll suppression in corners – a few dry on- and off-ramps had me clutching at those large shift paddles for extra power, yes, but mostly extra aural entertainment.

There’s a total of 280 hp available from the 2.0-litre turbocharged four, the only engine available until the mighty Stelvio Quadrifoglio and its 505 hp turbocharged V6 arrives in spring 2018, which will make it one of the most powerful SUVs on the market. Still, the Stelvio’s 280 hp and 306 lb-ft of torque is right at the front of similarly sized engines by its rivals, though most also offer six-cylinder engine upgrades as well – ones that may be less powerful than the upcoming super V6, but less thirsty as well.

Running this engine up to redline provided a healthy push in the back, but redline comes in at a surprisingly low 5,500 rpm. An eight-speed automatic is standard, as is the DNA drive mode selector (allowing for Dynamic, Natural, and Advanced Efficiency modes), while those lovely paddle shifters are optional.

Speaking of thirst, this Stelvio averaged a healthy 12.9 L/100km – not great for a four-cylinder, and would have been better if not for a record cold snap and lots of snow, meaning lots of idling while brushing the car off, as well as a couple instances of remote starting that surely helped bump it up from its official government-rated 9.6 L/100 km average. 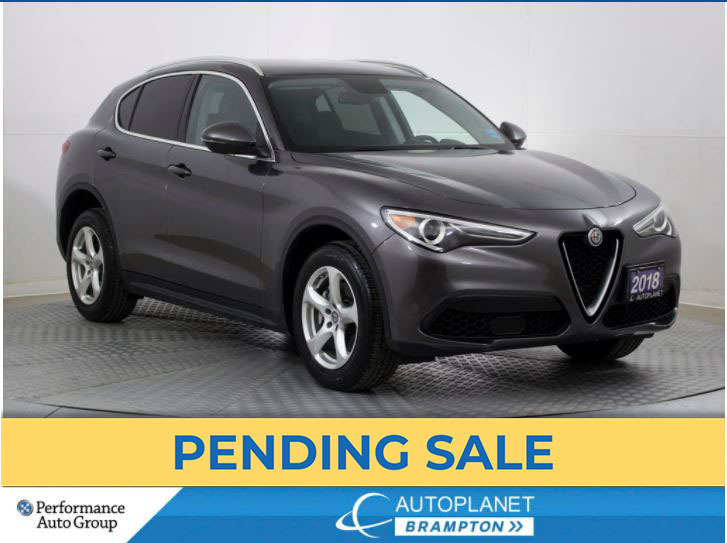 Beauty, even if not a sport wagon beast

The beauty of this Alfa Romeo Stelvio may be its most seductive trait, but there’s enough practicality and exclusivity here to appeal to upscale driving enthusiasts who’d like a little Italian elegance that’s outside of the luxury mainstream. There’s no doubt the Stelvio will help Alfa Romeo to grow its relatively small dealer and customer base, and provide a worthy alternative to those upscale sport wagons to boot.

About Michael Bettencourt
Michael Bettencourt has been writing about cars and automotive topics for over 25 years, with over two decades as a member of the Automobile Journalists Association of Canada (AJAC). A journalism graduate of Ryerson University, he has won multiple awards for technical, vehicle testing, and green vehicle writing. Currently a judge for the Electric Vehicle Dealer’s Association awards, he bought his first EV in 2011, and follows the EV industry closely.
Follow me
You may also like
8.0