It’s the little details, sometimes. In many areas where it counts, the 2018 Cadillac CTS feels cautiously calibrated to create a satisfying luxury performance drive – and one that demonstrates plenty of attention to how things feel and respond at the tips of the driver’s fingers and toes.

The engine is loud when pushed, but sounds glorious, athletic, heavily mechanical, and increasingly angry the faster you get it spinning.

It’s small stuff that many an owner may not even notice. But luxury fans love little details and the CTS is full of them, right down to the signature tactile sensation dialled into much of the cabin and drive.

This starts inside, where almost everything is heavy.

The subtly solid and muted jiggle through the cabin when the engine turns on and off. The doors, and their handles. The signal stalk. The power windows, which seal with a discreet thrrrph when closed. The motorized sliding centre console cover. The shift lever. Virtually everything you can manipulate on board the CTS operates with a consistent sensation that’s heavy and velvety and substantial. Many of these controls and provisions require just a touch more effort and force from your fingertips to manipulate than expected – as if designers were keen on ensuring drivers feel a density when they interface with the car.

Or, the steering. On the highway, there’s a very slight numbness on centre, to keep the CTS from feeling twitchy or nervous. Then, there’s a good tug on the wheel required to break it away, which helps keep the car locked into its lane and prevents the need for much readjustment of the steering while you cruise. When steering more vigorously, changing the CTS’s direction occurs with small and quick but heavy and deliberate inputs. It’s a unique feel – and probably, the best steering in this segment.

Then, the engine. The tester ran Cadillac’s latest 3.6-litre V6, good for 335 all-motor horsepower. A non-turbocharged mill of this sort is a relative rarity in the luxury car scene lately, but Caddy’s V6 serves up two important (and increasingly rare) attributes that driving enthusiasts will relish.

First? The sound. Where many turbocharged engines sound scarcely more pleasing than an electric leaf blower, the CTS powerplant emits a deep growl that escalates into a nearly shrill wail as the revs climb. The engine is loud when pushed, but sounds glorious, athletic, heavily mechanical, and increasingly angry the faster you get it spinning. As it is with machines like, say, the Infiniti G37 and Lexus IS, CTS’s all-motor V6 generates a pleasingly mechanical sound that melts and morphs and grows as the engine works faster.

Second? There’s a power curve, and the engine’s output has a form, feel, and character to it. Where turbo engines typically offer a flat-as-a-board shape to the power delivery that sees peak output arrive early and stay on strong, the Cadillac V6 delivers thrust on a rising wave. Power surges, swells, grows, and expands as the revs climb. It’s peaky and climatic, further reinforced by how sweet and meaty the engine sounds when the tachometer closes in on redline. Turbo engines tend to deliver more low-end torque and better mileage, but CTS’s V6 is more thrilling and exciting to put through its paces – not to mention pleasingly quiet and laid-back when driven gently.

This one’s a worthy test drive indeed when your new luxury car wishlist includes satisfying responsiveness, plenty of delightful details, and an overall feel that’ll quickly connect with your desire for equal parts posh-factor and performance, losing little in between.

It all comes wrapped in that oh-so-distinctive Cadillac body. Presumably designed to incite pride and exclusivity, the latest CTS maintains the sharp-edged, angular, nearly crystalline shape that’s defined it for years. The result is sculpting that’s instantly identifiable, and unmistakably Cadillac, from a mile away.

Then, there’s the cabin – which is the best and worst part of this machine, depending on your size.

The good? Like the body, the cabin is detailed, depthy, and uses a nearly overwhelming level of contrast between materials and colours and textures to create a classy and modern richness. Gloss black trim. Stitching for miles. Metallic accenting to tie it all together. Your eyes and fingertips could get lost in the details, and much of CTS’s cockpit is as pleasant to touch as it is to look at.

It’s also high-tech to the nines. There’s a large central touchscreen interface for common controls. A second high-resolution screen comprises the fully digital, totally customizable instrument cluster, which is a positively gorgeous display. A third screen appears in the rear-view mirror when activated, turning the conventional rear-view into a camera-fed, ultra-wide display out the back of the vehicle. This even has a driver-activated washer fluid jet to keep the external camera clear on the saltiest of winter drives.

The downside? It’s not as big a cabin as you think. In fact, I’d bet dollars to donuts if you haven’t spent much time in close personal proximity to a CTS, you probably think it’s about 10 percent bigger than it is.

In any case, given the CTS’s appearance, your (5'10", 200 lb) writer figured on having more room to stretch out. Entry and exit are a touch snug. Once seated, my knees touched everything, albeit lightly. My thigh blocked access to the door storage pockets. My elbow blocked access to the awkward release for the centre console lid. It’s a tad snug to start, and if you’re wearing a heavy winter jacket and boots (or, if you’ve just crushed leg-day and stuffed yourself with two hours of all-you-can-eat sushi), you’ll be chewing into even more of the CTS’s precious cabin volume. Mostly, I just wished it was about two inches wider.

Ride quality matches the rest of the CTS’s character: creamy, solid, dense, and heavy. It leans to the sporty side of the equation (more so when drivers engage the shock-stiffening Sport mode), but leaves a generous layer of calculated softness around the boundary of the dampers to quell undue harshness. Drivers coming into the CTS from any number of other sporty sedans will feel right at home. On extremely rough roads the ride can get busy, but CTS rarely feels like it’s taking a beating.

On the highway, it’s a comfortable and responsive cruiser. Here, wind noise levels are kept in check nicely to just beyond the speed limit, and the engine cruises along in eighth gear at lazy-low revs. Should a nighttime cruise be in order, CTS’s headlights should impress: light output is top-notch, far-reaching, and clean. 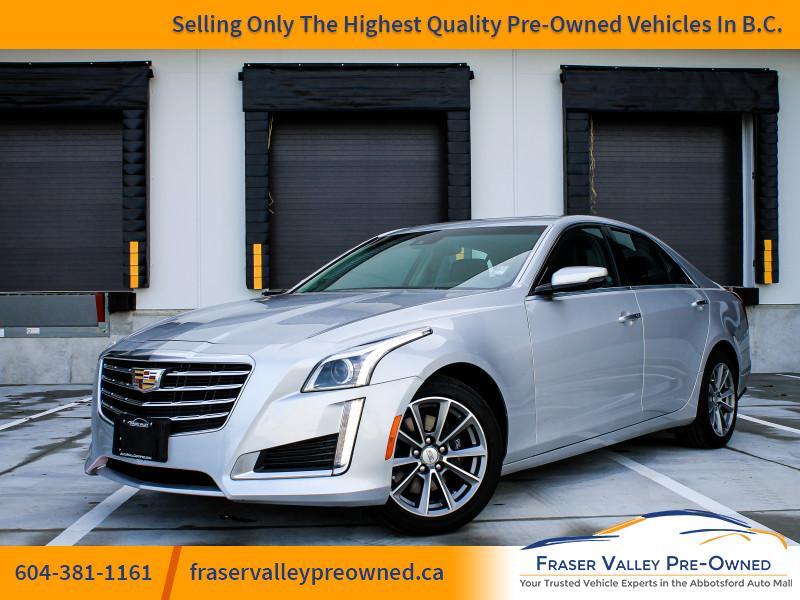 Brake pedal feel is sharp and relatively precise. Overall precision at the pedal isn’t quite on par with some competitors (e.g. BMW and Lexus), but the feel remains nicely tuned.

Braking performance? Hard to say. The tester was naughty, wearing a set of Pirelli P-Zero performance tires in the middle of January, so available traction was on par with a greased Krazy Karpet. Smash the brakes hard on some snow or ice, and you get a nice, long foot massage as the ABS system tries to get the car stopped, which takes a good while.

Those shoppers who confirm acceptance of the CTS’s cabin dimensions will find it a compelling package, more so when priorities centre around an authentic feel, distinctive looks, and a very pleasing driving experience. Note that if you’re a bigger gal or gent who finds the CTS too small, the $70,000-plus requested for a nicely loaded unit like today’s tester will also get you into a pretty swanky Cadillac CT6, which will have all the room you need.

About Justin Pritchard
Justin Pritchard is an automotive journalist, consultant, TV presenter, and photographer based in Sudbury, Ontario.
Follow me
You may also like
8.0