The pace at which the automotive market evolves these days is dizzying.

The Infiniti Q50 3.0t Sport strikes a balance between power, driveability, and price.

Considered a standout under-$50,000 upmarket sedan when it launched a few years ago, the Infiniti Q50 became an effective gateway to transition buyers into the premium set. Its relatively low price, unique and classy styling, and interesting technologies like drive-by-wire steering earned it plenty of attention.

To keep things fresh, several new powertrains were added for 2016, and a light update has also been applied for 2018, making this the second round of changes since the latest generation launched four years ago.

Times change, though, and so do expectations. The crop of competitors this car is up against has stepped up the game. And as a result, buyers considering the Q50 have more questions and choices to weigh before making a decision.

How much power do you need?

Here, it’s the Q50 3.0t Sport under the microscope, the 300 hp version, which makes 295 lb-ft of torque between 1,600 and 5,200 rpm. It’s matched with a seven-speed automatic transmission that has an adaptive learning algorithm that will sense the driver’s style and adjust its shift points automatically – which is a cool thing – along with standard all-wheel drive for us snowbound Canadians.

My husband and I had some animated discussions during this week of testing in which we debated between this powertrain and the 400 hp version, which we had in our driveway a few months ago. Being the power-above-all sort, he insists that the Red Sport 400 is the only way to go in this car.

But I’m the one writing this review, so I’m going to give it to you straight: from a sheer output perspective, for the way most people drive, the 3.0t Sport delivers more than enough. It’s plenty beefy for highway overtaking or those breathless last-minute sprints to school pick-up, and the responsive throttle feel supports the power sensation with confidence. Unless you’re going to be taking it to track days or car meets that require some semblance of street cred, this version will likely suit you just fine.

Its fuel efficiency is also pretty good for this class, rated at 12.4 L/100 km in city driving and 8.7 on the highway. I averaged 9.7 on my week-long test of roughly 75 percent highway driving, which with the trade-off of the 3.0t Sport’s space and power seems more than fair.

In the 2018 Q50, there are a few factors at play that define its dynamics.

One is the second-generation of drive-by-wire steering, which Infiniti refers to as direct adaptive steering – not because it’s new but because you may have heard less-than-glowing things about the first iteration. The newer one is better than the older one, and that’s still worth noting.

The other is what Infiniti calls dynamic digital suspension, a fancy term for the electronically adjustable shock absorbers equipped on the four-wheel independent suspension that can loosen or firm up depending on the type of driving you’re doing.

Both systems are adjustable with the drive mode selector that comes standard on both of the V6 twin-turbo models. Six modes are selectable in total: Standard, Sport, Sport+, Eco, Snow, and Personal.

Standard is meant to be the most comfortable setting, and it does loosen the steering and damping considerably – enough so that I found it removed more feedback than I prefer. I was happiest in Sport and Sport+ modes, though I still didn’t find the Q50’s driving dynamics to make you want to throw it into corners like, for example, the Alfa Romeo Giulia does, one of those aforementioned newer competitors.

Sharper looks, but conservative inside

On the outside, I find the cosmetic changes from the Q50’s latest refresh to be big improvements. The grille and headlight combination gives the front end more substance, and the lower air intake and daytime running lights are much better defined. A shift in the window line toward the rear wasn’t in the cards this time around, unfortunately – a treatment that nudges closer to that of the current Q60 would be a welcome addition.

Inside, the 3.0t Sport feels conservative. If you spring for the Red Sport 400 then you get some more dramatic touches like contrast stitching, which might be the most compelling case for choosing it over the lesser-powered version. Here, things are relatively monochrome. In any version, though, a panoramic sunroof is unavailable – a key upmarket feature.

That said, there are some thoughtful touches: rather than traditional memory seats, the car remembers the preferred seat setting by key fob and adjusts as each driver gets in. The seat heaters remember whether you wanted them on or off between start-ups, too.

This Q50 3.0t Sport’s front seats are defined as sport-type and are leather-upholstered as standard. I remember finding the seats in the Red Sport 400 to be supportive, but after a long highway drive I found that these ones had a tendency to push me into slouching forward, which led to upper back stiffness after a while. I have a taller torso than average, so experiences here may vary.

This is where updates are needed most.

It’s not the dual-screen infotainment layout that gets me. Many other reviewers have panned it over the years, but I’m partial to it. More information is better, as long as it’s easy to read and digest at a quick glance – which it is here, for the most part, although the type could be larger.

Where I struggle is the fact that the button layout makes simple tasks like scanning quickly through radio stations take longer than needed. Plus, there’s nowhere to lean your hand, so you need to float it while you’re stabbing at buttons, which forces you to look down at it occasionally to check that your hand hasn’t slipped, thus taking your eyes off the road where they belong.

On the other hand, there are 36 radio preset slots, which is exceptional. If you take the time to program the stations you want, flipping amongst them becomes much easier.

And as of yet, no Infiniti product comes with either Android Auto or Apple CarPlay, nor with any other sort of smartphone interactions apart from the standard Bluetooth features. 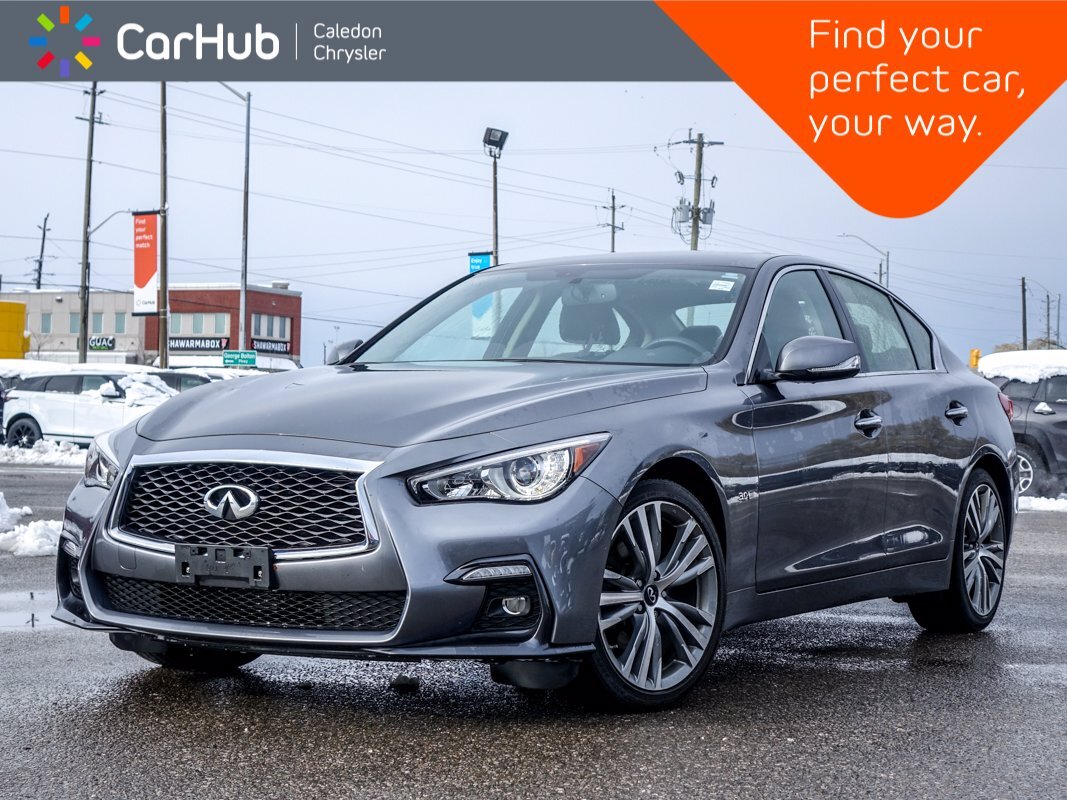 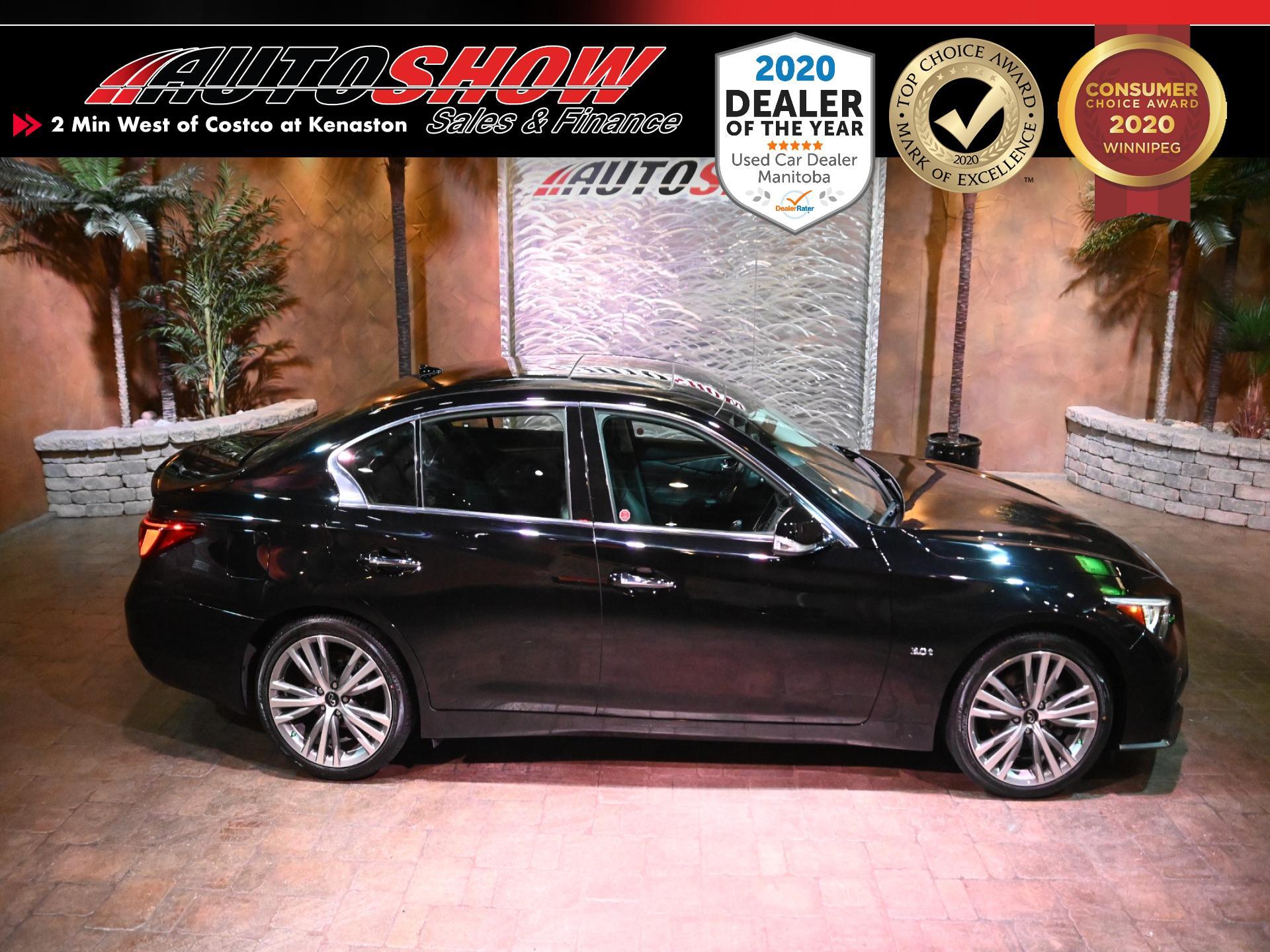 While it has several strong competitors with more performance chops and marque cachet, the Infiniti Q50 3.0t Sport strikes a balance between power, driveability, and price – and most importantly, it stays right at that $50,000 mark without going much over, which can be the single factor that makes a difference in keeping curious shoppers within the luxury segment.

About Stephanie Wallcraft
Stephanie Wallcraft is the child of an auto worker and honed her passion for cars in the grandstands of the Molson Indy Toronto. Today she continues the family tradition by writing about cars and motorsport for publications across Canada.
Follow me
You may also like
7.7