It’s never been a better time to go shopping for a crossover. Every brand is just falling all over themselves to get their latest little runabout into your driveway, and the competition is pushing more and more features into more affordable models.

What it gives up in practicality, it makes up for with tech that people want.

Every year, masses of consumers are switching from cars to SUVs, so each brand is aiming to offer more selection in terms of size, style, and value in their SUV lineups, like Nissan with no fewer than five sizes, three of them compact or smaller. Mitsubishi isn’t a major player in the North American scene, but they have quietly built up their portfolio as they turn their focus to crossovers.

The Outlander and RVR have been on the market for some time, but are relatively fresh for Mitsubishi products. The latest arrival for the brand is the 2018 Mitsubishi Eclipse Cross, slotting neatly between those two and lining up with the smaller compact crossovers like the Hyundai Tucson, Nissan Qashqai, and Subaru Crosstrek. It’s a pretty fluid segment, so good luck trying to pin down the competitive set these days.

The Eclipse Cross shares the same 2,670 mm wheelbase as the smaller RVR and larger Outlander; and at 4,405 mm long, it is a bit longer than the RVR, and quite a bit shorter than Outlander. Cargo space is just a bit more than RVR at 640 litres in the trunk and 1,385 with the 60/40 split-folding rear seats both dropped – though they don’t fold quite perfectly flat. Plenty of room for a road trip or weekend away, but it might fall short of having enough space for the annual camping trip if four people are along for the ride. The seats themselves are comfortable in both rows, but headroom is limited in the rear – I found my hair brushing against the headliner, and I’m less than six feet tall.

Although it’s sized closer to the RVR, it’s priced closer to the Outlander, and that is because Mitsubishi thinks this will appeal to an entirely different buyer, one that is more interested in style, technology, and features than outright practicality. And though practicality may take a back seat to style with the Eclipse Cross, Mitsubishi is in no position to offer anything but good value, so while the price climbs a little compared to the RVR, the Eclipse Cross includes some healthy kit for its $29,248 starting price ($27,798 MSRP plus $1,450 destination charge). Chief among those that Canadians will appreciate is standard S-AWC all-wheel drive and a new 1.5-litre turbo four-cylinder.

The Eclipse Cross is the first vehicle to feature Mitsubishi’s new 1.5L turbo, and in addition to variable timing and direct injection, it also has port injection and electronically controlled wastegates to further improve efficiency and eke out every bit of power available. The end result is 152 horsepower and 184 pound-feet of torque, all of which feels very usable, since peak toque is delivered as early as 2,000 rpm. Ranging in weight from 1,565 kg to 1,590 kg depending on trim, the Eclipse Cross accelerates smartly thanks to that standard all-wheel drive and a responsive continuously variable transmission, which defaults to provide some sportiness, though an efficiency-minded Eco mode is available at the press of a button on the console.

The steering is crossover-light but natural, and the suspension finds the right balance between prioritizing comfort and absorbing rough impacts, and providing enough stability in turns to be the athletic one in the Mitsubishi SUV lineup. What rough patches we saw, which included a bit of washboard-gravel road, were reasonably controlled without too much clattering, and it was even a bit of fun to toss into corners, the brake-based torque vectoring of Mitsubishi’s Super All-Wheel Control (S-AWC) helping to tuck in the front end and get going out of curves. Let’s be real, though, this is no Evo or even a sporty car, but if that’s what you wanted you’d be shopping for a Subaru WRX or Volkswagen GTI, not a compact crossover.

The Eclipse Cross, in addition to all-wheel drive, packs on quite a few desirable features as standard equipment, like back-up camera, Android Auto and Apple CarPlay, and on the top trims has some other pretty high-end gear like LED headlights, adaptive cruise control, and head-up display. Although the head-up display is on its own tacked-on little screen that flips up, Mitsubishi pointed out that windshield-projected head-up displays require a coating that makes those windshields significantly more expensive to replace should you get a bad crack.

The next trim up is the SE, priced at $31,448 (including destination), which adds blind spot warning with lane-change assist, rear cross-traffic alert, paddle shifters, dual-zone auto climate, leather-wrapped steering wheel, rain-sensing wipers and premium seat fabric. That fabric was actually pretty cool, with a high-tech-looking pattern worked into it. If you prefer fabric seats, you don’t get shafted by packaging, and can still get the good tech, as Mitsubishi offers a Tech Package on the SE for another $2,000, lumping in some of the latest driver aids, including forward collision mitigation with pedestrian warning, lane-departure warning, adaptive cruise, plus auto high-beams, and auto-dimming rear-view mirror with HomeLink garage door opener. This is the value leader of the lineup and is nicely featured without the price climbing up too high.

However, if you are set on all the features and are willing to spend for it, there are two GT trims available that start by including all the features of the Tech Package, then adding double sunroof (Mitsubishi calls it panoramic, but really it is a sunroof that opens in the front, and a second, fixed roof “window” for rear passengers), LED headlights, head-up display, multiple views for the back-up camera, 710-watt Rockford-Fosgate audio system with nine speakers and big subwoofer in the back, plus leather seats, power driver’s seat, and heated steering wheel and rear seats. The GT lands at $37,448 (including destination), so it’s not cheap, and the GT Diamond Edition dresses it up with a body kit, black wheels and fancy red paint for $38,948.

It does make for an attractive package, and the interior has looks to match, but we do have one big gripe with the interior. Although the central seven-inch display is a touchscreen and there are steering wheel controls for typical audio and phone functions, there is also a small trackpad on the centre console with some smartphone-style actions for common functions. It pretty much sucks. There is no haptic feedback and it did not seem intuitive at all, and I’m pretty sure most people would trade it for a pair of good old-fashioned volume and tuning knobs – Senior Editor Jacob Black would be guaranteed to pick a pair of dials 11 times out of 10 instead of this “dog’s breakfast”. It very much feels like Mitsubishi got stuck with tech that sounded cool from a few years ago, and couldn’t develop an alternative in time for this launch. Although Mitsubishi’s research shows that the Eclipse Cross will appeal to the younger generations, there are still plenty of Boomers and others that don’t want to be challenged with an unpleasant user experience just to change the volume or station. 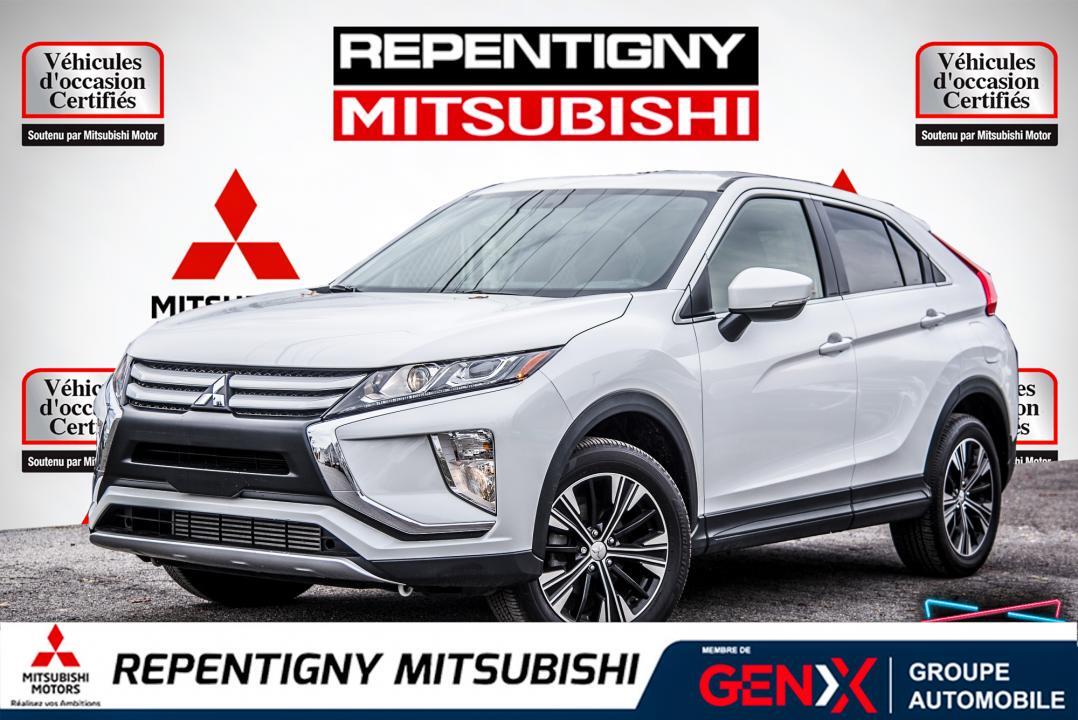 However, that is probably my biggest beef with the Eclipse Cross, and I would consider it a minor one. The Eclipse Cross has up-to-date, modern mechanical underpinnings, it drives well and suits the segment, its styling should find many that find it appealing and cool, and what it gives up in practicality, it makes up for with tech that people want. Small crossovers are the new compact sedan of a generation that is just coming into its buying power, and Mitsubishi is ready with a product that opens the door to shoppers that are looking for something more stylish than their Outlander and RVR, and different than the CR-Vs and RAV4s that are in everyone’s driveways.

About Jonathan Yarkony
Jonathan Yarkony is the former Senior Editor for Autos.ca and autoTRADER.ca, AJAC member, a Brampton-based automotive writer with years of experience evaluating cars and installing child car seats.
Follow me
You may also like
AdChoices
Latest Articles
﻿