The 2018 Nissan Qashqai and I were first introduced by way of a four-hour midnight road trip, which would conclude a long day spent in cars and airplanes as the last leg of a whirlwind 48-hour journey.

Crossover SUV traction and flexibility, and every possible safety feature, wrapped up in a compact but upscale package.

Within a few minutes, Qashqai proved itself a worthy companion for the late-night drive. First, because of the LED headlights included with the $2,700 Platinum Package, and especially the high-beams, which are top notch. They virtually replicate the light colour, power, and saturation I expect in a bigger-dollar luxury ride. A quality set of headlights is first and foremost on my wish list for late-night travel, and Qashqai’s optional headlamps delivered.

A certain set of highway driving dynamics also proved well done. First, the steering is light enough not to be laborious, but tuned with sufficient on-centre weight and resistance to keep the little machine locked into its lane with minimal need to readjust. Drivers never fight with the steering, but it doesn’t feel too light or inaccurate either. Simply, Qashqai feels keen to stay on the line you select, with minimal need to issue steering corrections.

The ride straddles the centre-line between firm and soft – it’s pleasingly responsive, without being harsh. Comfortable enough for an easygoing long-distance cruise, but unbothered by some higher-speed browsing of corners and on-ramps for those so inclined.

The cabin is roomer than it looks. In and seated, your 5'11" correspondent felt like he was in a taller, roomier sports coupe. Surrounding my mostly average build, the Qashqai fit nicely: I enjoyed a short reach to nearly everything, and a sense of sitting close to the centre of the action but without being crowded. I could fit behind myself in the rear seats, with adequate room, maybe a little more. This one should prove roomy enough for four average-sized adults.

In the rear, the cargo hold is shallow at first glance, but some reconfigurable organizers and slats can be deployed or removed to set the area up to taste.

The driving environment is mostly well sorted. Decent at-hand storage helps keep drivers organized, the dated central command screen is simple to use, and mostly, the materials palette is well done – even though some will wish for a splash more colour or excitement from the cabin, especially at this price. Though the trimmings and assembly quality are relatively good, the overall appearance, finished in full-black, lacks visual punch. Further, a few strangely placed controls and dated switches / stalks take away from the atmosphere slightly.

No complaints about the instruments though: the cluster is bright, logical, vivid, and presents with resolution and clarity that wouldn’t look out of place in something with a bigger sticker.

So, from a few minutes of travel on a late-night drive home, this one feels nicely dialled in: a good thing given my tester’s intention of appealing to an emerging breed of shopper. That shopper wants compact car size and mileage, crossover SUV traction and flexibility, and every possible safety feature, wrapped up in a compact but upscale package that’s no harder to drive, park, or position than a small car. If this sounds like you, Nissan figures you’ll be okay with the top-dog Qashqai’s hefty-for-a-litte-ute $32,000 sticker.

And you do get virtually everything. Automatic climate control? Check. Heated leather? Check. A sunroof? Check. The Around View Monitor parking cameras? Push-button start? Motorized seat adjustment? Full steering-wheel mounted controls? Yep – it’s all here. Not that long ago, this sort of equipment list was reserved for big-buck luxury rides. There’s just one feature missing: a high-end branded stereo. The provided unit was good, but audiophiles will be left wanting.

Expect this market segment to grow in the coming months and years. Canadian shoppers are rapidly ditching small cars for small crossovers, which are more easily boarded, more flexible, more spacious, have a more commanding driving position, and offer AWD traction. Notably, Qashqai’s AWD system is largely invisible, typically makes good decisions even when pushed, and operates with no driver involvement required – though a selectable Lock mode can be engaged at a button-press when additional pre-emptive traction is required.

At the other end of the powertrain, a 2.0L four-cylinder engine serves up 141 horsepower, and all units equipped with AWD run Nissan’s Xtronic continuously variable transmission (CVT).

First, though 141 hp looks a bit low on paper, remember that Qashqai is fairly small and light, meaning that power isn’t pushing a huge amount of weight. Also, since the CVT transmission helps optimize power delivery, Qashqai is snottier than the numbers lead on. It’s still most impressive in light-to-moderate driving where it’s smooth and quiet, though even opened up, the little engine doesn’t sound or feel like it minds spinning fast. For how most drivers will drive the Qashqai most of the time, the performance is just fine. 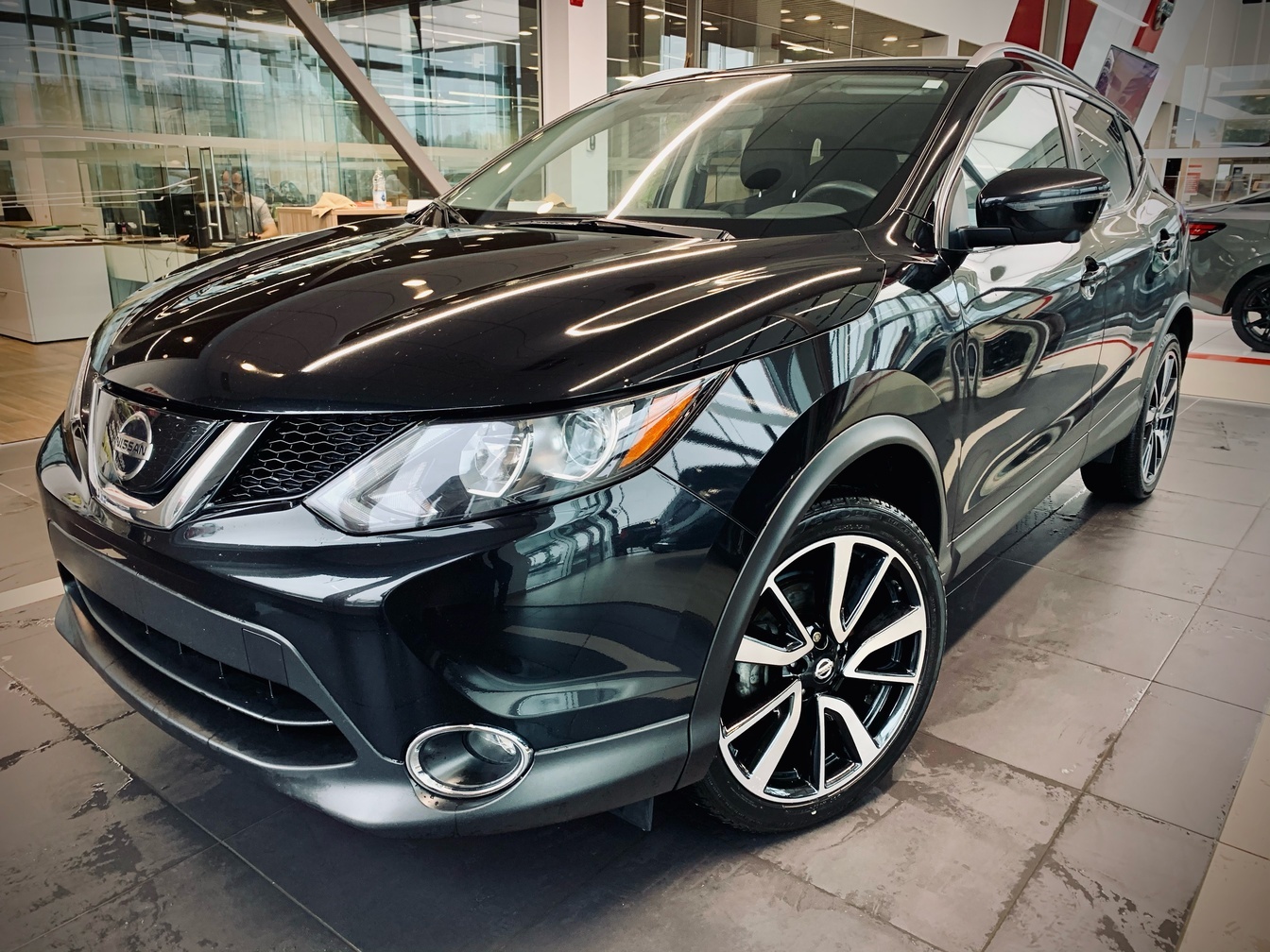 The CVT transmission is excellent too. Drive gently, and you don’t know its there, or doing anything at all. Here, revs glide to position, hold steady, and the vehicle accelerates as normal, but without any detectable shifting.

Drive harder, and programming sees the CVT simulate gearshifts, jumping from point to point on its gear ratio curve, instead of ramping and blending the revs into one single wave of thrust. Jab the throttle, and the tachometer snaps upwards a few thousand revs, climbs a few revs more, drops a few revs, and repeats. It’s faking it, but it feels just like a regular transmission. In fact, at full throttle, the transmission executes a series of rapid-fire pretend upshifts that call a high-performance automatic transmission to mind.

No complaints when it comes time to stop, either. Brake feel demonstrates the same level of calibration as the rest of the Qashqai’s dynamics: a slight layer of numbness at the top of the pedal prevents them feeling too touchy, and there’s a positive ramping up of stopping power with less and less pedal input beyond that point. In all, the brakes feel responsive and precise, and they inspire confidence when you’ve got to get stopped, fast. All of that without being too touchy or sensitive for comfortable use in traffic.

Parking and tight-quarters manoeuvring is a cinch, thanks to a relatively small turning circle, decent outward sightlines, and 360 degrees of camera coverage. Just note that though Qashqai’s Around View Monitor is a slick bit of tech, the low-resolution display limits image quality, which is reduced further if there’s even a little salt or dirt on any of the four camera lenses – which will be the case for about half the year.

My main gripe dealt with the placement and weirdness of a few too many of the controls. The Safety Shield system, oddly, needs to be turned on every time you start the engine, via a button located on a panel of orphaned controls in front of the driver’s left knee. This particular button is blocked from view by the steering wheel rim, and it’s located next to the heated steering wheel button, which should be on the steering wheel, but isn’t. The AWD Lock button is down here too, though it should be on the centre console (which is where the heated seat switches are, though those should be on the climate control console).

You’ll get used to the illogical placement of some of the controls before too long, though it does take away from the experience slightly. Many out-market small crossovers landing in Canada demonstrate similar control layout funny-business as designers fit advanced features and systems into machines that, presumably, weren’t initially laid out for them.

Ultimately, Qashqai amounts to a unique new package for a unique new shopper who wants the latest tech and safety in a compact, upscale, and easy-to-live-with package. The competition in this segment is going to get fierce, and it looks like Qashqai is well equipped to stay the course. If you’re shopping, give this one a look.

About Justin Pritchard
Justin Pritchard is an automotive journalist, consultant, TV presenter, and photographer based in Sudbury, Ontario.
Follow me
You may also like
8.1