It’s often said that there’s no such thing as a bad car these days, and that’s never been truer than in today’s luxury compact SUVs.

A status symbol, like an artfully cut gem or designer handbag.

A glance across the contenders here reveals a very stout list of contemporary options. Among the Mercedes-Benz GLC, BMW X3, Audi Q5, Porsche Macan, and Jaguar F-Pace, there’s not one single car that I wouldn’t be very happy to have in my driveway.

So, what’s likely to cause a buyer to choose one over another? In this segment, it comes down heavily on the side of personal style and taste.

And in that regard, the 2018 Mercedes-Benz GLC 300 is a highly appealing option. Other cars at the entry model’s price point might be more practical or more powerful, but that’s never what the GLC set out to achieve. Instead, it’s more of a status symbol, like an artfully cut gem or designer handbag. In that role, it performs exactly as intended.

The GLC 300 comes with a 2.0-litre turbocharged four-cylinder engine that produces 241 hp and 273 lb-ft of torque between 1,300 and 4,000 rpm. It comes paired with Mercedes-Benz’s in-house-built nine-speed automatic transmission and standard 4Matic all-wheel drive.

The GLC 300’s power figures are lower than most of its competition, and that translates into a somewhat more relaxed feel on throttle. Its Sport modes also don’t feel as dramatically different between themselves as they do in the higher-powered models, simply because there’s not quite as wide of a band to work within. The transmission isn’t always performance-quick to react, and it’s tuned in such a way that few drivers are ever going to make effective use of all nine ratios. But for the way its drivers are likely to want to use it – that is, getting around town and an occasional spirited Sunday drive – most will find it performs well enough for their liking.

However, fuel economy is a factor to be considered. The official NRCan figures for the GLC 300 rate it at 11.1 L/100 km in the city and 8.6 in highway driving. After my week of testing, I returned it at 14.1. To be fair, I drove it almost exclusively in the city and made liberal use of Sport and Sport+ modes. But with fuel prices trending upward and this engine requiring premium fuel, keeping it topped up is an expensive proposition. That’s not unique to the GLC, though – it’s a fact of life for any car within this segment.

The GLC handles very well for its body style. Even through curves and under acceleration and braking, it shows very little pitch or roll. Its steering is electromechanical and feels on point, and the ride quality is smooth and comfortable without being soft or soggy.

Not long ago, this was a highly distinctive element of the GLC; now, several of its direct competitors have been significantly updated and have caught up in this regard. Still, for those looking for comfort and stability over sporty stiffness, I find the GLC to be a standout.

This is where the GLC truly shines. It’s rare that looking at an SUV evokes actual excitement, but approaching this one in my parking garage never got old. Its stylish good looks – aided by the Sport Package, which adds on 19-inch AMG Twin Five-Spoke wheels and exterior accents – and crouched stance that looks ready to pounce made me look forward to climbing into it every time.

On the inside, the thoughtfully laid-out and pleasingly symmetrical interior design is made even better by the quality of the standard leather upholstery and the addition of open-pore wood accents. This option is $250 extra and in my opinion is worth every penny – it’s a minimal spend that dramatically increases the class quotient. 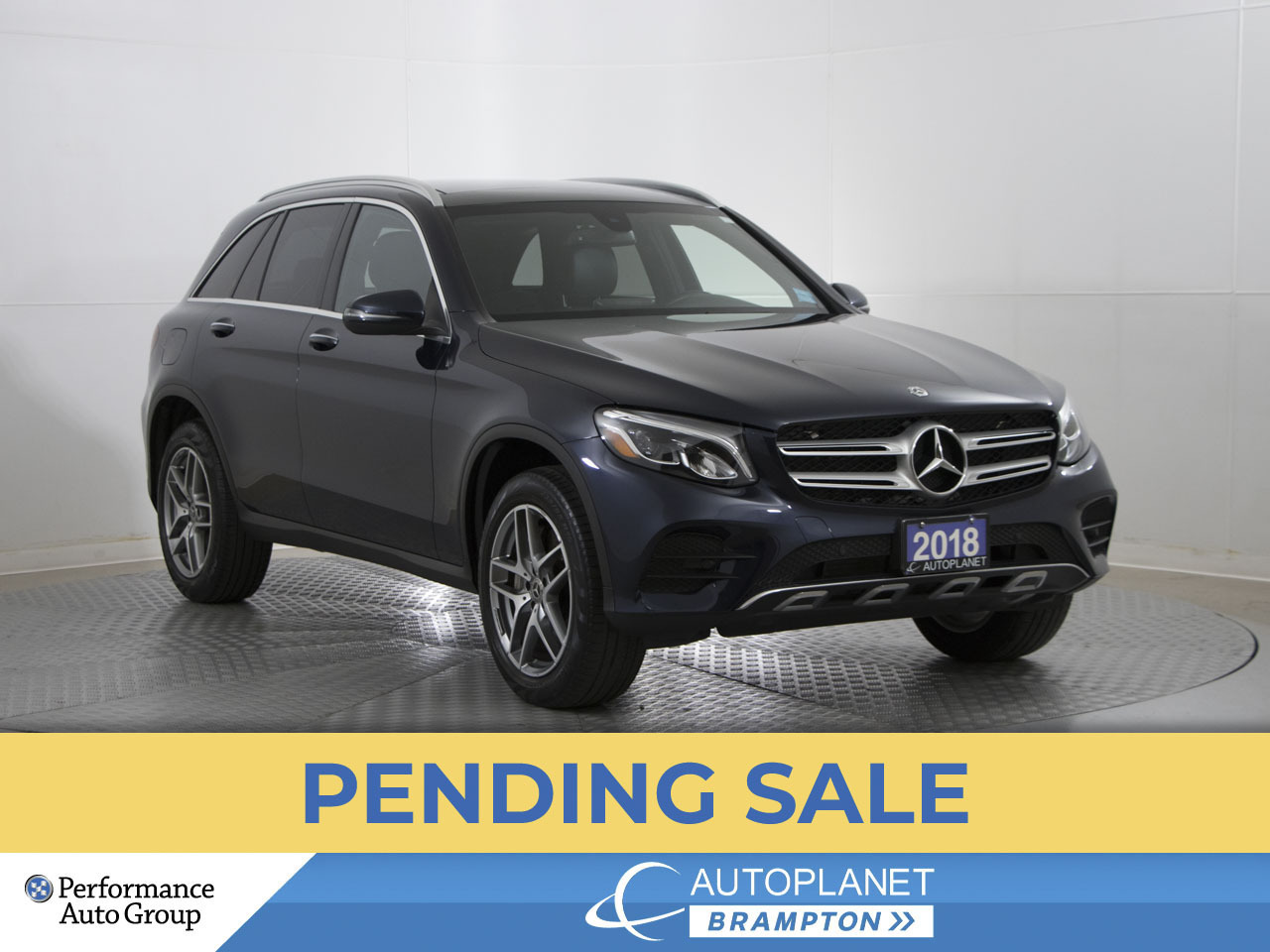 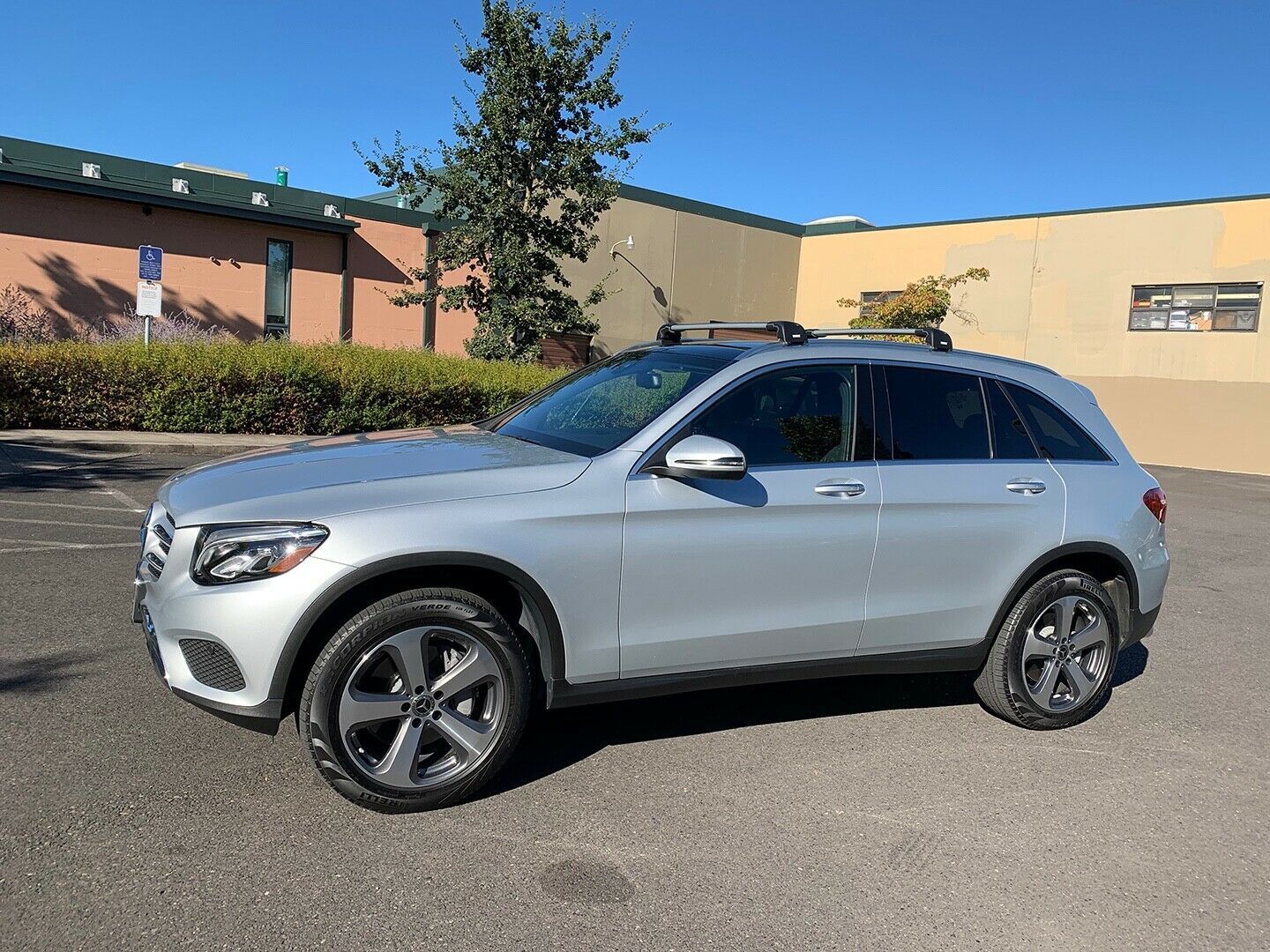 In this entry-level model, adding on the panoramic sunroof, which is a split design, helps brighten the interior considerably but can only be included with the $5,500 Premium Package that also adds on a power tailgate, on-board navigation, LED lights, keyless entry, and a DVD drive. This is the biggest spending decision to be made on the GLC 300, so the value-versus-enjoyment factor on it will need to be weighed by the buyer.

Similarly, while the front seats are comfortable on their own and come heated as standard, adding the Premium Plus Package at $2,700 improves them markedly with power adjustments and a memory function. It also adds in an 115V power socket, power steering column with memory function, foot-activated tailgate release, active parking assist, ambient lighting, and a 360-degree camera (as opposed to the rear-view camera that now comes standard on the 2018 model). None of those features are essential, but many of them do make life with the GLC 300 easier.

Interestingly, this package used to include heated rear seats, but that’s now a standalone option, as is a heated steering wheel ($550 and $250 respectively).

Top-notch infotaiment, with a curious omission

The Mercedes-Benz infotainment system interface, with its mix of buttons, touchpad, and dial, is one I find to be among the most user-friendly of the luxury-brand systems. Once the driver gets used to where to find the most frequently used features, it’s easy to navigate among them without much distraction.

On the topic of smartphone integration, things get interesting. According to the Android Auto Canadian website, the 2018 GLC should have Android Auto functionality – but it does not, as confirmed by a public relations representative at Mercedes-Benz Canada. Apple CarPlay is also not included. These features are being rolled out through the Mercedes line-up, but they haven’t yet made it into the GLC. If they’re important to you, you’ll need to wait for a while longer or consider other options.

As a gateway into premium compact SUVs, the Mercedes-Benz GLC 300 strikes a beautiful balance. For those who don’t need a lot of power, are willing to spend on the features they want, and see style as a high priority, this car will be a perfect fit.

About Stephanie Wallcraft
Stephanie Wallcraft is the child of an auto worker and honed her passion for cars in the grandstands of the Molson Indy Toronto. Today she continues the family tradition by writing about cars and motorsport for publications across Canada.
Follow me
You may also like
Latest Articles
﻿