Toyota continues to lead the way when it comes to hybridization of their product line. The list of Toyotas that are available in a hybrid gets longer every year. It turns out that many consumers aren’t aware of some of these models, unless they have been shopping for one. But the original doesn’t need any introductions.

It took days for the gas gauge to move from full.

The Prius is recognized as the car that brought hybrid technology to the masses. At first it was a novelty, as if it was barely possible to pull this kind of thing off. Then many associated the car with tree-hugging eco-weenies that would clog up the left lane of their favourite freeway. And then... it just became another vehicle on the road.

The Prius got a serious renovation in 2016 and it remains relatively unchanged for the 2018 model year.

Anyone who felt the original Prius design was getting a little boring is in for a surprise. The current styling certainly sets itself apart. Toyota’s CEO said, “No more boring Toyotas,” and he wasn’t kidding. The five-door liftback is pretty darn distinctive on the road and while I don’t completely hate some of the angles, the exterior styling has not grown on me either. For the most part, I found it ugly and perhaps almost trying too hard to look different. I didn’t meet anyone who liked the current Prius’ styling while I was reviewing it. Honestly.

There is a benefit to the severe creases and angles – the 2018 Toyota Prius is one slippery beast with a 0.24 drag coefficient. Toyota went with the split rear window again, combining a raked rear hatch and a vertical glass partition. On our wet spring roads, I found that the vertical rear glass quickly got dirty from underspray and there is obviously no wiper to fix that, so I often found myself going to the gas station to wash that little window so I could see out of the back properly. Annoying! Ironically, the upper portion stayed perfectly clean. I never had occasion to use the rear wiper.

Prius gets LED headlights, fog lamps, and taillights. The latter make for a very unique light signature in the dark – much like the car’s styling, for better or worse, you can’t miss it.

The overall package is not visually appealing to me and this trim’s 15-inch rims (that emulate hubcaps, no less) don’t help at all. The Touring trim’s 17-inch wheels are much nicer.

Toyota goes with a sleek, clean design for the interior and the organic shapes work well in my opinion. The spacious cabin’s materials are decent – I’ll call them softish-touch. The glossy piano black trim is a horrible dust magnet – it drove me crazy. It appears that the interior can also be had with glossy white trim, which would alleviate this issue.

Speaking of retaining design cues, the famous central instrument bin stays put. You can get a wealth of information here (including a digital speedometer, navigation commands, what’s playing on the stereo, and a boatload of hybrid/fuel economy related screens) and the display is highly customizable. While I prefer instrumentation in front of the driver, this set-up actually works pretty well.

The seats are upholstered in Toyota’s excellent Softex material – they are comfortable and reasonably well bolstered. I found the location of the seat heater switches to be aggravating – they are very low, and almost hidden behind the pod for the gear selector. The driver’s side seat is power-adjustable.

The seven-inch touchscreen handles the usual – phone, audio, and navigation functions, as well as vehicle settings. For the most part, it all works well – although the system never successfully downloaded my contacts from my phone and the voice recognition struggled mightily on occasion. I’ve not had those issues with Toyota’s system elsewhere.

The automatic climate control has an eco-friendly twist to it. You can choose between regular or eco mode, which uses less energy – and you can even decide if you want to set the heating and cooling for the driver position only. And then you can track your climate control eco score on a screen. Sounds nerdy but I found it satisfying.

At the front of the console is a tray with a Qi-compatible wireless charging mat for your phone. The console also houses auxiliary, USB, and 12V plugs and a nice carpeted bin under the armrest. In front of the passenger are upper and lower glove boxes.

Rear passengers get comfortable seats with a good amount of legroom (at 5'10", I had several inches to spare sitting behind my own driving position) and acceptable headroom (I had about an inch to spare) but the middle position is tiny. There’s an armrest that folds down out of the middle seatback and a 12V charging plug at the back of the centre console. Can we ditch the 12V plugs please? Nobody uses them!

We really enjoyed using the Prius’ 697 L trunk. Its ability to swallow cargo is impressive, and the rear seats fold down in a 60/40 if you need more space. Toyota includes a tonneau cover and cargo net.

On paper, the 1.8L four-cylinder and electric motor that combine to make a 121 net horsepower are the front-wheel-drive Prius’ least impressive assets. The transmission is a CVT, of course.

What’s much more impressive is my observed fuel economy of 4.5 L/100 km. It took days for the gas gauge to move from full. And while that’s all good stuff, it will still take some significant time for a buyer to recoup the initial up-front investment through fuel savings, versus another similar gas-driven car. The 43 L fuel tank allows for a reasonable range on the highway.

The Prius has several drive modes to choose from. EV mode lets you try to eke every last bit of juice out of the battery but even under the most ideal conditions and with the lightest touch on the go pedal, it doesn’t last long. Normal mode is what most people will use most of the time. Power mode gives up some economy and makes for a surprisingly sprightly hustle, especially from a standing start. ECO mode was actually the biggest surprise to me. It was very usable, and never really made the drive feel more sluggish during everyday driving. I ended up using it for a good part of my week in the Prius. All of the drive modes (except EV) get you up and running in a reasonable amount of time. The CVT sends the revs soaring if you step on it, but for the most part, it’s a very livable drivetrain.

As one would expect, the regenerative braking takes a little while to adjust to – the brakes are both mushy and overly grabby compared to conventional ones.

The Prius rides very nicely. It always feels substantial because of the battery’s weight sitting nice and low. Its handling is fine, but it definitely prefers driving in a straight line – push it and understeers quickly and that weight becomes immediately evident in the corners. 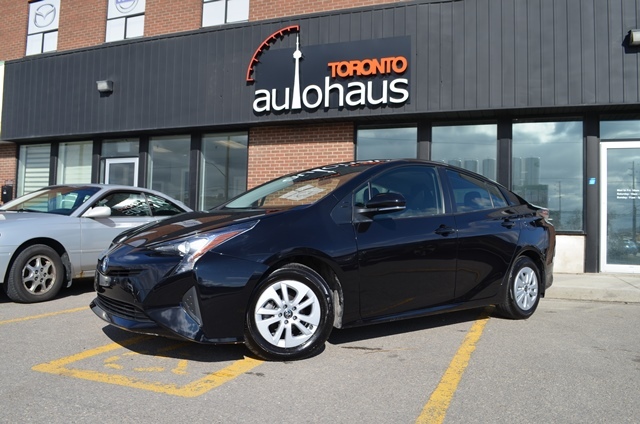 The Prius is very quiet when it comes to road noise, but we heard quite a bit of wind noise on the highway. Visibility out of the car is good, except for the bisected rear view thanks to the split window design.

WAF (Wife Approval Factor) was mixed. She did not like the exterior styling, but was surprised at how nicely it drove.

Much like Toyota’s Camry, the Prius just does a lot of things right and it would be an easy car to live with. It has plenty of great selling points – it certainly delivers on the fuel-economy front, it is comfortable and has great cargo space and comes loaded with some pretty solid tech. But then there are those looks....

If you’re shopping in this category but are after a much more conventional-looking (and feeling) vehicle, have a look at the Hyundai Ioniq.

About Tom Sedens
Tom Sedens is an Edmonton-based automobile journalist and driving enthusiast, an accredited member of AJAC, husband, and dad. He is also a part-time pie evangelist.
Follow me
You may also like
7.5