FLORENCE – The rain poured down on us just after we finished washing the 2018 Alfa Romeo Stelvio Quadrifoglio, about halfway down to Rome on our 1,600 km, four-day driving route in the Mille Miglia – Italy’s famed annual classic car caravan. It seemed terrible timing for us in our previously shiny new SUV, until we looked over at the wet and gloomy faces of the driver and navigator of a 1930’s-era roadster, its identity blurry in the haze of spray emanating from its tires – and that of surrounding Mille Miglia participants, as well as regular traffic.

Suddenly, the rain seemed much less consequential, and life inside the modern, climate-controlled and leather-lined interior of Alfa Romeo’s top-of-the-line SUV much more comfortable than a few seconds before.

Previously, the ride provided by the standard low-profile tires and the handling from the electronically controlled suspension seemed more controlled ferocity than frou-frou comfort, especially for an ostensibly luxury SUV that starts at $95,000 in Canada. Then again, we alternated that Alfa DNA Pro drive mode selector largely between the most aggressive Dynamic and extra loud and thumpy Race modes, the former of which worked best on the rolling and twisty roads through Tuscany and other Italian provinces.

Ironically, we went slowest when in Race mode, which completely turns off traction and stability control, but also makes its loud exhaust burbles and firecracker whips extra entertaining throughout plenty of low-speed trundling between massive stone arches and tight alleyways lined with Mille Miglia spectators. Risking nausea and more through clouds of emissions-control-less exhaust, they still come out in droves to admire the style and enthusiast history of the 450 or so classic, sporting machines from every country.

And many of them implored us for more noise, even from the (for this crowd) relatively prosaic Stelvio – often when they noticed the special Quadrifoglio four-leaf clover on the fender.

That green badge on each fender denotes that this is a special Stelvio, packing the 505 hp 2.9-litre twin-turbocharged V6 that Alfa Romeo says makes it the “world’s fastest production SUV”. The Italian brand cites a Nürburgring time of 7m51.7s as support for this claim, the fastest time ever recorded by a production SUV, which is a truly impressive figure.

The Alfa, however, comes in at about half the price of the top-line Tesla, and closer to a third compared to the Bentley. Sure, value is often relative, and there are various cars in this performance range that cost less. But from a pure acceleration per luxury SUV dollar perspective, the Stelvio Quadrifoglio is easily amongst the quickest on the market.

From the driver’s seat, this engine is a joy to exercise, with big boots of throttle flinging 443 lb-ft of torque through an eight-speed automatic transmission to all four wheels, providing rowdy gasps and an engaging personality when rocketing around curvy Italian mountain roads, yet refined and smooth enough when tootling through traffic – on long trips to ensure that car-sick-prone kids arrive less green than that four-leaf clover. Those shift paddles are long and easy to access to matter how the steering wheel is turned, and though they may seem like cumbersome stalk blockers at first, they really come in handy when hard-charging.

What’s not so green here is the Stelvio Quadrifoglio’s fuel consumption, which landed at a miserable 18.8 L/100 km/h during our often hard-charging morning to midnight driving stint in it, punctuated by lots of low-speed tiny village manoeuvring near the end of each staging area. The stops behind traffic, MM drivers who actually had time-distance marks to hit, and even the occasional selfie-taking onlookers, helped the system’s automatic stop-start system save some premium fuel.

Alfa’s official figures suggest a combined city/highway figure of 15.0 L/100 km is achievable, or at least possible, if gently driven. But that’s going to be a tall order for any owner, given the Stelvio Quad’s propensity to throw your head back into its softly padded head restraints – which were notably more forgiving than the Giulia Quadrifoglio’s – while working that torque-vectoring all-wheel drive system through the Stelvio’s trick carbon-fibre driveshaft.

Passionate personality in style as well

Unlike most SUVs, the Stelvio oozes passion, and not just from its available body-hugging Sparco seats, which feature carbon-fibre shells as well as hardcore manual fore/aft and recline adjustments, but also from its shapely design as well. Even surrounded by literally hundreds of classic and modern sporting machines, our red Stelvio Quadrifoglio drew a healthy number of exclamations of “bella macchina”, especially as one got closer and you could distinguish the multiple “…Quadrifoglio…” references dropped by suddenly more excitable onlookers.

That large triangular Scudetto grille is a veritable work of art, though in practice it doesn’t work nearly as well in provinces that require a front plate. But it and the sloping rear roof – combined with the pronounced rear haunches, quad exhausts, and the sharper nose up front – all send strong visual signals that this is not a mere family-oriented grocery getter.

Inside, the Quadrifoglio offers a stylishly sporting yet business-like interior, with metallic and carbon-fibre accents throughout the largely dark surroundings. Black Alcantara inserts on the grey leather seats combine luxury and sportiness elegantly, while a three-spoke steering wheel with a hyper red starter button is placed just about where Ferrari locates their similar start buttons as well.

And for a bit of fun, green accent stitching throughout the interior provides a playful reminder that there’s a touch of good fortune coming from this Quadrifoglio model. Or perhaps that’s already happened, to any owner that can afford this Quadrifoglio’s near six-figure starting price. That said, a sub-$100K starting price still seems like reasonable value next to similarly quick SUVs like the Porsche Cayenne Turbo, Mercedes-AMG GLE 63, and BMW X5 and X6 M models, all of which start above $110k.

Sure, this Alfa’s svelte body shape may cost the Stelvio some points in rear headroom and cargo-carrying capability – good but not great for the class – with 525 litres (a Cayenne offers 670 L) expandable to 1,600 L with the rear seats folded. It underscores the importance of design and performance as priorities for Alfa Romeo, as even more common Stelvio models (which start at $51,845) are relatively quick and powerful in their segment, offering 280 hp from a turbocharged four-cylinder engine. 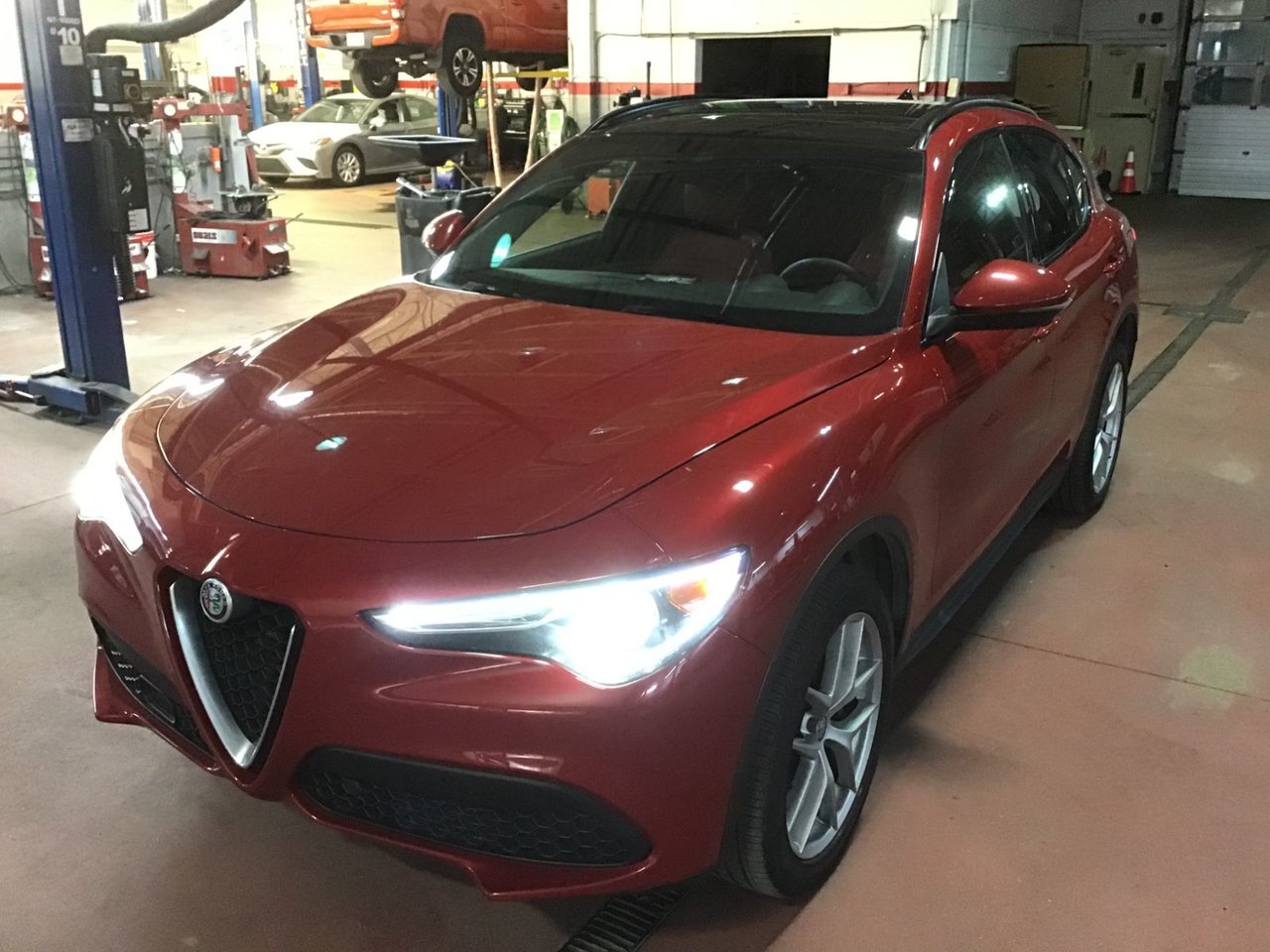 As such, Alfa Romeo has firmly planted their flag on the sporting side of the booming luxury SUV business, and away from the more mainstream comfort and spaciousness goals of more usual upscale brands. For those enthusiast buyers looking for a stylish and powerful alternative to the common luxury SUVs crowding high-end shopping malls, the 2018 Alfa Romeo Stelvio Quadrifoglio is a gorgeous option and relatively good value – no matter where you drive it, or how inclement the weather is.

About Michael Bettencourt
Michael Bettencourt has been writing about cars and automotive topics for over 25 years, with over two decades as a member of the Automobile Journalists Association of Canada (AJAC). A journalism graduate of Ryerson University, he has won multiple awards for technical, vehicle testing, and green vehicle writing. Currently a judge for the Electric Vehicle Dealer’s Association awards, he bought his first EV in 2011, and follows the EV industry closely.
Follow me
You may also like
AdChoices
Latest Articles