Sports cars are great. It’s something we can almost all agree on. But sometimes you don’t want a sports car. Like when you’re sitting in traffic. Again. Or when you’re going to get groceries and your hip or knee isn’t exactly thrilled with the prospect of being forced into a big-bolster bucket seat. How about when you’re just stepped off that 2am arrival flight that was delayed an extra hour? Those times, the last thing you want is a car with a ride like the suspension is more brick than spring, and seats that clamp you like an awkward hug.

If you're looking for tail-out skids, this is the wrong place to do it.

Those are the times when you want soft. When you want comfortable. When you don’t want involvement, you want to arrive. Isn’t that why we have SUVs in the first place? Because getting into a car was getting tougher, and the upright and comfortable SUV was a gift from the car gods that delivered high hip points, one-finger steering, and couldn’t care less about lap times.

That’s what the Lexus NX300 is all about. Comfort and transportation. If you want sporty, Lexus will direct you to the F-Sport trim that will give you the firm adaptive suspension, rubber-band tires, and big bolster seats. This is the Executive trim. There will be none of those shenanigans here.

Open the driver’s door and glide sideways into the living room, I mean cabin. The nearly unbolstered driver’s seat greets you like that recliner in the basement. You know the one. It’s as old as you are, if not a few years older. You’re not even sure where you got it. Maybe you found it on the curb? It hasn’t been fashionable for decades, but every time you ease down into it, you’re welcomed with a warm, soft embrace. Like Norm arriving at Cheers, mixed with grandma’s baking. Just sit. Relax. Enjoy the most serene feeling you’re likely to find this side of that time you deleted your FaceBook and Twitter accounts.

Are these power-adjustable, heated, and ventilated thrones the most comfortable in automotivedom? Of course not. But they’re damn comfy and better than anything else near this price has to offer.

With a lead-in like that, can the rest of the NX deliver serenity now?

It sure tries. The soft leather of the seats is accompanied by similar materials on the centre armrest and the door panels. There’s even a mirror hidden in that armrest turned mousepad that Lexus butts up against their touchpad infotainment system controller. This is the latest version of the Lexus Enform system, which offers built-in traffic and weather apps, as well as emergency assists like collision notification and stolen vehicle location. It’s not the most intuitive set of controls, and it operates a system that looks dated and lacks Apple CarPlay and Android Auto connectivity. The Bluetooth syncs quickly with my phone, so the integration is less of a bother. And the system’s ability to let you toggle the display between a single 10.3-inch wide display or split-screen for more info, along with quick operation, make up for a lot.

While the rear seats don’t offer the same sofa-like feel as the front thrones, they do offer seat heating, power folding, and they’ll recline to help passengers in the back get comfy too. Headroom back there is tight, but this is a compact crossover, so that’s little surprise. It’s good for the class, and all except those well over six-foot will have enough room to make sure their hair isn’t tussled by the headliner. And there’s enough legroom for them to sprawl out in comfort.

The 2.0L four-cylinder engine delivers power nearly as smoothly as the driver’s seat delivers a contented sigh. It runs smoothly and quietly through the entire rpm range and combined with a six-speed automatic, this little crossover is impressively quick. It’s the same engine that was badged NX200T last year, and it makes 235 hp with 258 lb-ft of torque. Use all of the power and, despite the all-wheel drive system, the torque tugs at the wheels. It’s a little more torque steer than you would expect from a Lexus, though it’s not unmanageable. The big underhood noise blanket works to keep engine noise to a minimum while you’re jockeying for position at the next traffic slowdown. You’ll know the engine is there, but the grumble stays mostly in the background. The NX300’s all-wheel drive system operates smoothly, sending most power to the front wheels most of the time. If you’re looking for tail-out skids, this is the wrong place to do it. It’s for the best because squealing tires and opposite lock aren’t comfortable. It does offer a locking centre differential, which Lexus suggests you use in situations like being stuck in deep mud. It’s not likely that any NX owner will be taking this to their favourite mud hole, but it is a handy feature if you end up stuck in a snowbank, or if that grassy field at the fairground is a little more hilly and damp than you thought it was.

Drive the NX, and it feels supple and serene. The steering wheel feels just the right thickness, although the diameter feels a touch small. The steering effort is well suited to this vehicle, being firm enough to smooth the drive on the highway while being light enough for easy parking. It soaks up bumps in the road with little drama, especially for this small-crossover class. Handling isn’t high on the priority list for non-F-Sport models, but if you’re in a bit of a hurry today, the NX300 won’t get too bothered. Wind noise is nearly non-existent, and the biggest disruption to highway silence was a prominent tire rumble. Due to scheduling restraints, my test car was on beefy winter tires and my test was in double-digit late May temperatures, so much of that rumble can be pinned on those tires. 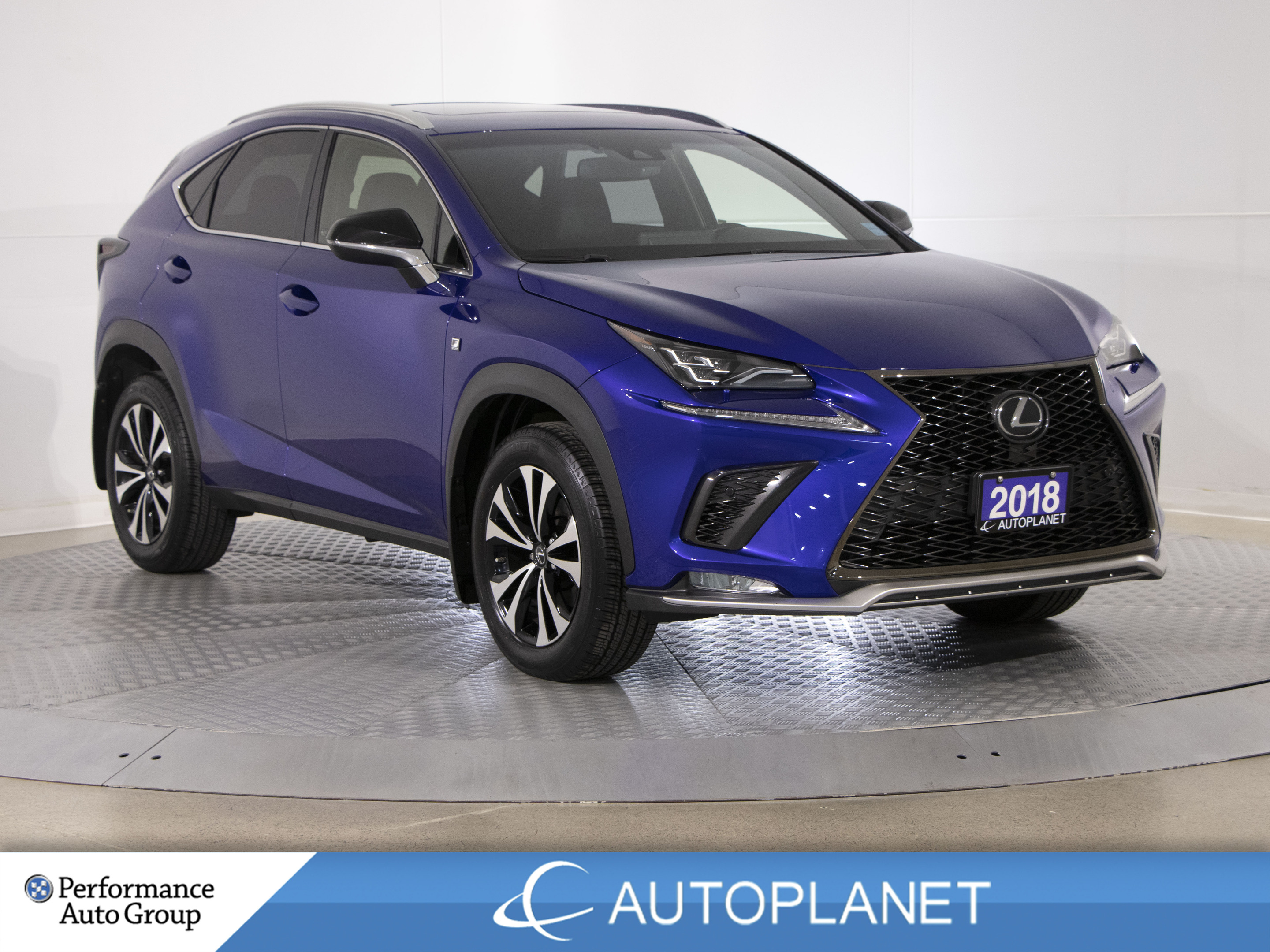 To help you haul things home, the tailgate is power-operating, though the cargo space it opens to reveal is long and not overly large. At 501L with the seats up and 1,545 with them folded, seat-up space is about that of a midsize sedan, and space with them folded trails competitors. That’s the price you pay for that sleek rear roofline, which brings me to the only part of the NX I don’t find comfortable.

The exterior styling of this crossover is definitely not boring, but it’s not going to appeal to everyone. The sharp bodysides and bulging wheel arches add a needed bit of flair to the small SUV, but the nose is... Let’s call it polarizing. Especially in black, like my test car. It seems like a compromise in the styling department around the Lexus spindle grille. At least the F-Sport trim commits to that nose, its unique front fascia might be the boldest implementation of the grille on any Lexus model.

In a world where even economy cars and super luxury brands are worried about sport, this is a welcome breath of fresh air. A crossover that’s designed to be as welcoming as an old friend, for buyers who don’t want or need the larger RX. Not meant for driving, meant for arriving. Because sometimes, you just want to get there. It’s what Lexus does best. Now if you’ll excuse me, there’s a ventilated seat calling my name.

About Evan Williams
Evan has been covering cars for close to five years, but has been reading about them since he was 2. He's a certified engineering technologist and a member of AJAC. If it moves and has an engine, Evan's probably interested in it.
Follow me
You may also like
7.4