Chile’s Atacama Desert presents visitors with a pair of existential extremes. Thrusting between 2,500 and 4,000 metres above the Pacific Ocean bordering the South American country to the west, and protected by the rain-blocking Andes to the east, the Atacama’s exceptionally dry air and sky-scraping altitude makes it the ideal spot to observe the stars. On track to host nearly 70 percent of the world’s telescopes in the very near future, the region has opened the heavens to astronomers in an unprecedented fashion, allowing humanity to better dream of a life beyond the surly bonds of Earth.

Prioritizes presence over practicality, but doesn’t cut back on luxury, power, or liveability in the process.

And yet, drier than any other sandy spot on the planet, the Atacama reins in those same hopes and aspirations by reminding you that, for the careless, death lurks just beyond each and every wind-pocketed, rust-coloured rock formation. In a region inhospitable to the point where NASA has regularly used it as a stand-in for Mars, it features large areas where water simply doesn’t exist – and as such, neither does any indigenous life, with even the hardiest insects and cacti remaining outside its borders.

It was here, bound between the heavens above and hell below, that I ventured to drive the 2019 Audi Q8. Although not nearly as dramatically, the automaker’s latest SUV also finds itself straddling two worlds in an attempt to carve out a spot in hostile, stratified territory, without losing its identity in the process.

For those expecting the Q8 to be merely the Q7-plus-one, the all-new SUV “coupe” has several surprises in store. Not the least of these is the decision to truncate the 8 in favour of introducing more muscular proportions as compared to its full-size platform-mate.

Audi has in fact sliced 2.6 inches (66 mm) from the overall length of the Q7 in building the Q8 – and yet, by preserving its wheelbase and adding 1.1 inches (27 mm) to its width, the vehicle still presents as large and in charge. Perhaps even more importantly, it also sacrifices nothing in terms of comfort for riders in its sliding second row.

Where the Q8 gives up some of its practicality is in total cargo storage. A five-seater as opposed to a seven-seater like its Q7 cousin, the absence of a third row makes for 605 litres of available storage space when carrying a full load of human cargo. Drop the back bench and you’re looking at 1,755 litres in total, which represents a 15 percent drop over the longer 7.

Of course, while it’s certainly useful in a day-to-day hauling sense, the impetus behind the 2019 Audi Q8 wasn’t to appeal to the left-brain but rather snag eyeballs by way of its slope-roofed styling. Following in the spiritual footsteps of rivals like the BMW X6, the Q8’s silhouette differs in one important detail from the big, truckin’ coupes on offer from its compatriots: whereas BMW and Mercedes-Benz have traced a sheet-metal arc with their designs, the Q8 instead cantilevers the roof back at a straight angle from the windshield, meeting it at the tail-end with a broad C-pillar that suggests chunky strength rather than rounded whimsy.

It’s a simple, and yet important detail from a design team that had no interest in repeating the recent history already on display in rival showrooms. Other unique aspects of the Q8’s appearance include the continuation of the large “Singleframe” grille up front that further adds to the imposing presence of the vehicle, as well as frameless door glass (a nod to the SUV’s coupe nomenclature), sculpted exhaust cut-outs at the rear, and buff wheel arches meant to accent the Audi’s standard quattro all-wheel drive system.

Although the percentage of Q8 owners who will deign to freight their luxo-SUV through mud and muck approaches zero, the surefooted character of Audi’s quattro AWD system was appreciated during my stint behind the wheel through the Atacama.

As we climbed out of the desert proper towards the Chilean Coastal Range, the roads began to crack and dissolve under the constant, barely filtered sun, which was still an imposing presence even during the southern hemisphere’s winter months. Leaving asphalt and gravel behind for certain sections of our journey, the Q8’s available air suspension system – which offers up to 10 inches (254 mm) of ground clearance – and four-wheel traction made short work of sandy dunes and rocky, rutted uphill trails.

It was elevation more than traction that challenged the Audi Q8 the most during our journey. Although Europeans will benefit from a pair of turbodiesel options, for the time being Canadian models come exclusively with a turbocharged 3.0-litre six-cylinder engine. Rated at 340 horsepower and 369 lb-ft of torque (and including a 48-volt mild hybrid system that works together with its advanced auto stop-start feature), the Q8 was best left in Dynamic mode, with the Sport setting on the eight-speed automatic transmission helping to deal with the deep breathing required in Atacama’s thin air.

Still, despite the barely there nature of the atmosphere, the occasional gusting crosswind was enough to nudge the 2,000 kilos of SUV ever-so-gently when travelling at high speeds over flat, open territory. Should this be a concern on your daily commute, then Audi offers a rear-wheel steering assist package that improves highway stability while also reducing the vehicle’s turn radius when parking. 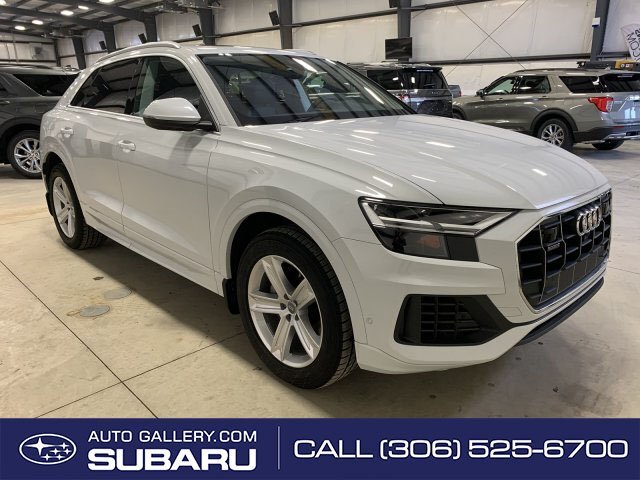 Expected to be priced north of the $61K ask of the more versatile Q7, the Q8 requires potential customers to prioritize presence over practicality, but doesn’t cut back on luxury, power, or liveability in the process. With its comfortable ride, respectable power, and tech-packed cabin (including the latest dual screen MMI infotainment system, Audi’s virtual cockpit, and a seemingly endless list of optional advanced safety features), the 2019 Q8 is spiritually, and stylistically different enough from its peers to avoid being labelled a “me too” response to a segment of the SUV market previously colonized by the competition.

Fortunately for Audi, it won’t take a trek through the Atacama for most potential customers to come to this conclusion for themselves.

About Benjamin Hunting
Benjamin Hunting is a freelance writer who enjoys keeping the shiny side up during track days. He is also an avid musician and a friend to vinyl.
Follow me
You may also like
AdChoices
Latest Articles
﻿