If you’ve ever done any climbing, you’ll know that there’s a near-pedantic amount of checking and rechecking to be done, with fail-safes to attach, and lists to remember. The elite athletes of the sport may throw caution to the wind, but those of us who hope to belay down a sheer cliff face without ending up like Wile E. Coyote need to take things slowly, steadily, safely. You don’t need your gear to be flashy, you need it to be trustworthy. Which brings us to this truly enormous Subaru.

There’s a gap in the Subaru range, and the Ascent is intended to fill it. Boy, does it ever.

Built on an extended version of the company’s global platform, the 2019 Ascent is the largest vehicle Subaru has ever built. It’s the Forester-er. The Out-big. A Subaryuuuuuge. Can you name the crossover with symmetrical all-wheel drive, smells like granola, and seats eight or five? Hyah, Ascentynaro, Hyah!

Built in Indiana, the Ascent could also be easily named the Captain Obvious. When a Subaru-loving family outgrows their Forester or Crosstrek, there’s currently nothing to do but head over to the Toyota or Honda dealership. A common ownership cycle might go: Mom’s used Legacy wagon, married-with-Impreza, two kids and a Forester, oh look we bought a dog too Highlander, and finally they’re off to college Outback. There’s a gap in the Subaru range, and the Ascent is intended to fill it.

Boy, does it ever.

Touring around the winding roads of Cape Breton, from highland gravel trails to the gorgeous scenery of the Cabot Trail, the overall experience of the Ascent was that I forgot I was driving it. This sounds like the faintest praise ever, and certainly an engineer attending the event seemed bemused by the comment, but it’s meant as a compliment. The old Tribeca was weird-looking, and a bit thirsty, and cramped. It required that you be okay with all these drawbacks if you wanted to be an oddball Subaru owner. The Ascent is about as inoffensive as a Rita McNeil Christmas special.

Let’s begin with the styling. Take a look. Did you order One Subaru, Size XL? Well there you go. Now stand back while I wax rhapsodic about this thing’s back doors like a raving lunatic.

Seriously. If you have kids, this is like the greatest door ever made. First, it’s huge, opening to almost a full 90 degrees and with a large, square opening that you could drift an STI through. Second, like the rest of the Ascent’s doors, the lower portion extends to the base of the vehicle, meaning no mud on your pant legs and/or smaller children. The floor is quite low to the ground too. Lastly, that window fully retracts, and rear-seat passengers can actually see out.

You can have the middle row of your Ascent as a bench or captain’s chairs in most trims. The latter fold relatively easily, though not all the way flat, but they can’t be removed. Cleverly, one of Subaru’s engineers has fixed bullet-train-style hand grips on the inner shoulders of the seats, meaning smaller kids can clamber in and out like the little apes they are.

The third row of seats is large enough for adults in a pinch, and has LATCH attachments on the left-hand side. With the middle-row seat slid forward, a one-handed operation, there was enough space for an adult to load a squirmy toddler back there. When the toddler gets older and squirmier, note that Limited and Premium trims come with extra USB outlets for the third row. Plug in Paw Patrol on an iPad and enjoy some sanity.

If you’ve got all three rows deployed, the Ascent suffers from much of the same drawback you get with most three-row crossovers, having right around 500 L of space. However, Subaru’s made the most of it by creating a small underfloor space for stowing little-used items (a first aid kit, jumper cables) and you can stow the cargo cover in there as well. There’s Velcro on the seat-lowering straps, which can be used to hold the lower floor tray up if you’re sorting through things.

Because it’s so much larger than the Forester, at almost five metres long, the Ascent doesn’t cramp the middle row by fitting in the third-row seats. There’s plenty of space for older families with taller kids. Driver and passenger comfort is very good, with adjustable added driver thigh support on the Limited models. The Premier version even has ventilated seats that draw air down, rather than forcing it upwards.

If you’re less likely to use the third row on a day-to-day basis, there’s 1,331 L of space with the third row folded, and the rear trunk is wide and squared off. The rear power tailgate in something like an Outback is annoyingly slow, but this issue seems addressed with the Ascent.

As for the rest of the interior, the Ascent seems a little more upscale than the Forester (it should, it’s newer), but still very much a function-first environment. Much has been written about the twenty-one cupholders scattered throughout the inside of the Ascent, but mostly, things look sensibly laid out. On a road trip, you’d have no issue finding a cubby for any kind of supplies you might need.

There are four trims of Ascent: Convenience, Touring, Limited, and Premier. Pricing starts at $35,995 for the base model, and tops out at just under $50K for the Premier. Most of these will likely sell in the mid-40s.

Subaru’s packaging for the Ascent is as sensible as the car itself. Their EyeSight suite of driver assists is standard, as is Apple CarPlay and Android Auto. The roof bars are standard too, and so are heated front seats. The very basic Convenience trim would check every box in the “needs” column, if missing out a few things in the “wants”. The single exception, perhaps, is the lower tow rating for the basic Ascent: the Convenience tops out at 908 kg, all other models manage a healthy 2,270.

The difference is in an oil cooler for the heavy-duty CVT, but otherwise all Ascents come with the same powertrain and braking capability. A 2.4L turbocharged flat-four engine provides 260 hp and 277 lb-ft of torque, running on regular grade 87 octane fuel. Fuel economy is rated at 11.6 L/100 km city and 9.0 L/100 km highway. All-wheel drive is standard. You may have heard Subaru mention their all-wheel drive system once or twice in the past.

From the driver’s seat, initial impressions are pretty much identical to the refreshed Forester, except there’s just more of everything. It would be an exaggeration to say the Ascent shrinks around the driver, but it doesn’t drive in an ungainly fashion. Regrettably, traction control can’t be completely defeated for some lift-throttle sideways action on gravel, but the Ascent does pivot around a bit if the driver in question is a bit of an idiot (*raises hand*). The chassis is more competent than Subaru thinks I am. Which is probably for the best.

Of more importance to the type of people who might buy an Ascent, instead of strapping a Thule to the top of their STI and pretending it’s a minivan, is the relative quiet operation of this big lug at speed. The CVT apes the shift points of a traditional automatic, so you don’t notice a drone, the steering is about as communicative as the sullen teenager you might be ferrying around, and the addition of material under the hood and other sound-deadening efforts have made the Ascent as quiet as a walk on a mountain peak. There’s wind noise, but that’s about it.

Acceleration proved adequate enough to get around a slow-moving truck on a short-ish passing section. However, if the odds are good that a retuned version of this 2.4L boxer is likely the engine for the new STI, there’s not much hint in the Ascent that there’s the heart of a rally champion underhood. It’s enough, but not much more than that.

A Subaru through and through

Let’s stop beating around the bush: none of what I’ve described will sound particularly exciting to any Subaru fans in the audience. That’s because it’s not. Excitement, Subaru-style, is stuff like hearing the wub-wub of an offbeat boxer engine, tires spraying gravel through a series of backroad switchbacks, vacuuming dog hair out of your trunk. Okay, maybe not that last bit.

What the Ascent offers instead is sheer competence with a Subaru badge on the front. But stifle your yawns for just a moment yet.

Equipped with Subaru’s X-Mode hill-descent system, and possessed of roughly the same ride height and clearance as the Forester, the Ascent proved itself sure-footed over some reasonably gnarly backwoods roads. The performance was worthy of the badge on its nose. The Ascent is wide enough that you should expect some branch-provided pinstripes if you’re venturing into the forest on a regular basis, but you should also expect to not get stuck in said forest and then eaten by bears.

Not being eaten by bears is something my family aspires to. And, while I personally have a fondness for ridiculously flimsy contraptions like the Lotus Seven, there’s an overall vibe of wanting to have some metal around you when dealing with the generally poor standard of driver ability and attention on today’s roads. It’d also be great not to have to yell to be heard over a rattle in the dashboard, or worry about having to replace two head gaskets.

A safe bet from a mature company

The Ascent dispatches these worries with ease – Subarus now no longer rattle, they sorted the head gasket thing a generation or two ago, and their safety ratings are consistently excellent. This new model fades into the background, offering a sort of window-like transparency to whatever you’re doing with it. I ended up not thinking much about what I was driving, but instead paying attention as the landscape of Cape Breton unfurled in front of me. It’s a wonderful place, and apparently completely infested with lobsters.

Having so few rough patches made grasping the Ascent’s character hard. All that polish made it slippery. After a while, I came to the conclusion that the Ascent doesn’t really have much of a personality – yet. It’s a blank slate, ready for you to write your family’s story on it. Don’t expect to fall in love with it on a first drive, but do expect to perhaps look back with fondness when you see it sneaking into the background of a family selfie on a road trip. If it doesn’t come with a heaping of soul, it is a great big useful box for a family to start storing memories in. That’s pretty likeable.

As Subaru evolves more and more into a mainstream brand, balancing appliance-like competency with some kind of charm is going to be a challenge. The Ascent will likely be a huge sales success out of the gate because there’s already a hunger for it from existing Subaru converted. Wooing someone away from a Highlander or Pilot might be a little trickier. 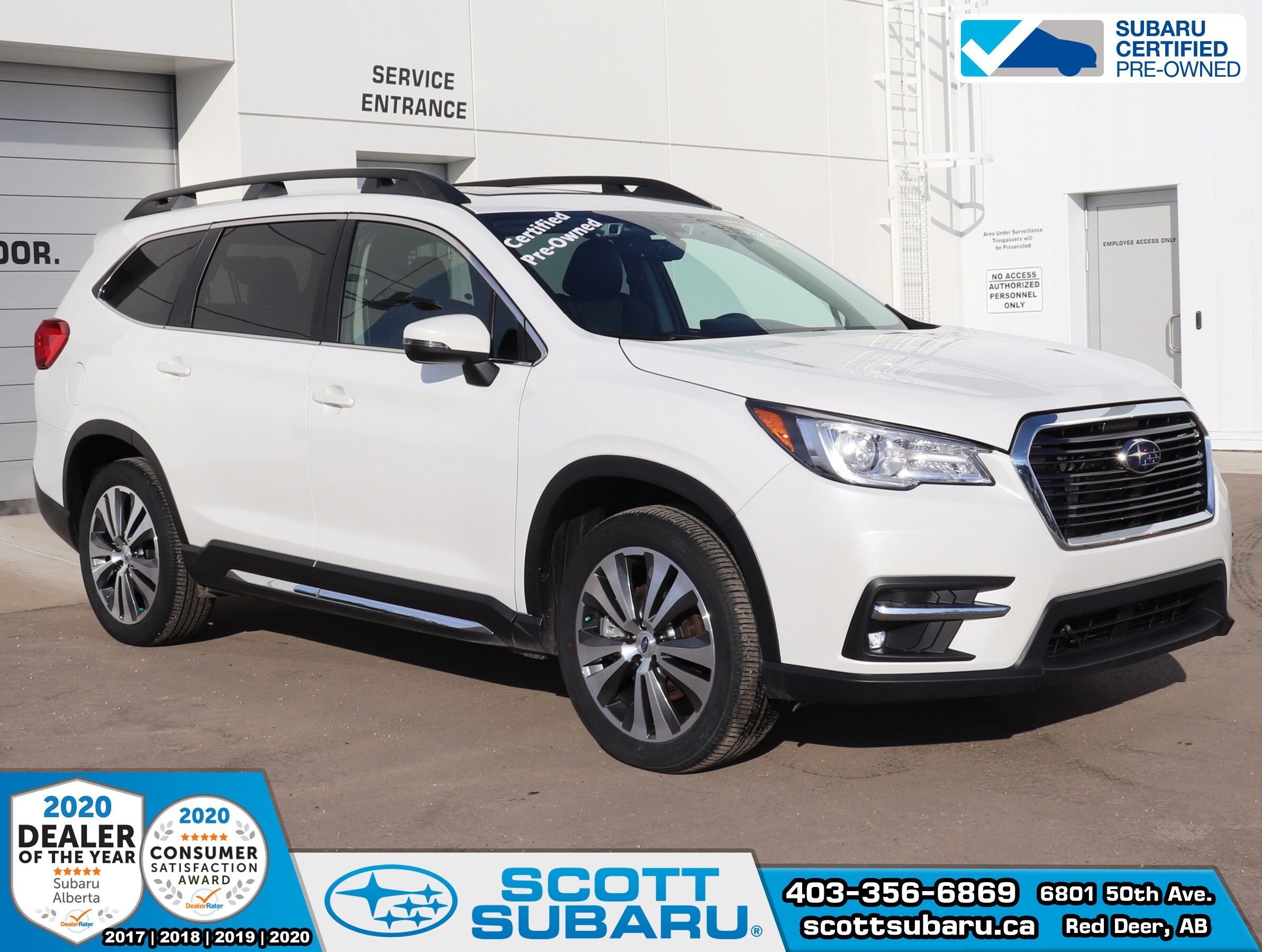 That’s a problem for another time. For now, the Ascent comes with my recommendation as an eminently sensible decision. As it’s a new model, I’ll throw a little asterisk on there on the off-chance that the odd teething issue emerges as cars start racking up the miles in customer hands. Still, it’s likely a safe bet.

Safe bets are what successful climbers make. You take your time. You manage the risk. You take the safe path, maybe not the more interesting-looking one. And, eventually, you find yourself at the top, with everyone looking up at you.

About Brendan McAleer
Brendan McAleer is a Vancouver-based automotive writer, a member of AJAC and a ginger.
Follow me
You may also like
AdChoices
Latest Articles
﻿