The first question people ask me about the redesigned 2018 Nissan Leaf is usually, “How far will it go on a full charge?” When I tell them that the 2018 Leaf’s Energuide-rated driving distance is 242 kilometres, up from 170 km last year, and that the Leaf’s range is better than most electric car competitors in its price range, they seem impressed.

I could have driven for five or six days before needing to recharge.

If they’re still listening, I mention that the real-world driving range for all electric vehicles is very dependent on a number of external factors, such as outside temperature, type of road, weather conditions, changes in elevation, vehicle speed, wind resistance, driving style, number of passengers, and amount of cargo.

On a cold day in February, the Leaf’s range could be reduced by up to 30 percent due to the lithium-ion battery’s sensitivity to sub-zero temperatures; additional energy draw from the heater, wipers, lights, seat heaters; as well as poor road traction. In a 2018 Leaf, that could mean a winter driving range under 170 km – or 85 km before you have to start thinking about turning around or finding a public charging station so you can make it home again.

Fortunately for Canadians, all 2018 Leafs include a standard battery warmer, which activates at minus 17 degrees Celsius or colder and turns off again when the temperature rises to minus 10 degrees. Leaf SV and SL trims also include a hybrid heater system. However, the Leaf’s owner’s manual says that at temperatures below minus 25 degrees, the Li-ion battery cannot be charged or provide power to the vehicle. So if you were looking forward to driving to Tuktoyaktuk this winter, you’re out of luck.

This test drive however, was conducted on a sunny and dry 25-degree day in August with only one person in the car driving at an average speed of about 100 km/h on a level freeway – almost perfect electric car conditions.

I started out with a full overnight charge from a 240-volt 32-amp charger (official recharge time is eight hours when the onboard charger is set to 6.6 kW; a Level 3 fast charge to 80 percent takes just 40 minutes) and drove the Leaf continuously (except for a lunch stop) until the “Warning: Battery Charge is Low” instrument light came with nine percent of the battery power left.

Even before starting out, the Leaf driver can extend the driving range by selecting Eco drive mode instead of Normal mode. Eco mode reduces power and acceleration slightly and cuts back on the air conditioning to save energy. At the beginning of my day, the Leaf’s range estimator showed a potential range of 271 km in Normal mode, but pressing the Eco mode button increased the Leaf’s estimated range to 284 km.

When the warning light came on, I had driven a total of 220.4 km with the battery 91 percent depleted and an estimated 29 km left “in the tank” for a potential total of 249 km – about 35 km less than the car’s estimated range of 284 km when I started out – but still close to Nissan’s published estimate of 242 km. For most of the trip, I was averaging less than 15 kWh/100 km, less than Energuide’s rating of 18 kWh/100 km. However, the last 10 km was uphill, so the final energy use would have been closer to 18 kWh/100 km. Distracted by a growing “range anxiety” about whether I would make it to the charging station, I failed to record it.

Keep in mind that freeway speeds draw more energy from a lithium-ion battery than city speeds do, so I may very well have reached the predicted instrument range of 271 km if I had driven at 50 km/h the entire time. In other words, if my daily round-trip commute (in summer) was the typical Canadian average of 46 km on city streets, I could have driven for five or six days before needing to recharge.

Making the most of stop-and-go traffic

One way to improve the Leaf’s mileage even further, especially in the city, is to move the transmission lever from D to B mode. B provides stronger regenerative braking when the accelerator pedal is released or when braking, but places a slightly higher drag on forward motion.

The Leaf’s new e-Pedal feature, which allows the driver to accelerate and brake using just the accelerator pedal, provides even stronger power regeneration. A button on the console activates the e-Pedal: acceleration feels normal with a slight drag, but releasing the accelerator pedal causes the Leaf to brake and slow down quickly but not suddenly. While slowing down, energy is sent back into the battery – even more than in B mode – helping to increase driving range.

E-Pedal braking is progressive and gentle, and in typical urban and suburban driving, the Leaf will come to a complete stop if the pedal is released. However, when going down a steep hill, releasing the accelerator pedal may not be enough to stop the Leaf completely, and the driver will have to press the brake pedal. Also, releasing the accelerator pedal at high speeds will slow the Leaf down, but stopping suddenly may require the driver to press the brake pedal.

One benefit of e-Pedal, particularly in stop-and-go traffic, is that the driver doesn’t have to constantly move the right foot from accelerator to brake and back. It does reduce the stress of city driving somewhat, but I found that it takes some practice to master the e-Pedal’s braking sensitivity.

Even without e-Pedal, the 2018 Leaf offers mild regenerative braking when the right foot is released from the accelerator pedal. The driver can see how much energy is being fed into the battery by observing the Eco/Power gauge in the instrument cluster in real time.

With its 40 kWh Li-ion battery and 110 kW electric motor, the 2018 Leaf offers 37 percent more horsepower and 26 percent more torque than the previous Leaf. Acceleration from a dead stop is surprisingly fast, even in Eco mode, and eerily silent. There is a slight whine from the electric motor while decelerating, but it’s barely audible.

Overall, I found the 2018 Leaf easy to live with: its highway ride is very smooth, handling is stable and secure, steering is low-effort while parking and increasingly firm and precise at higher speeds, the turning circle is satisfyingly tight, and the brakes are strong.

ProPILOT an assistant, not a chauffeur

A front radar sensor determines the distance to the car in front, and maintains a safe distance. If the car in front stops, ProPILOT Assist will bring the Leaf to a full stop, and resume driving if the driver touches the switch or gas pedal. As well, a camera in the windshield observes the lane markings on either side, adjusting the steering automatically to keep the Leaf in the centre of the lane.

I found that ProPILOT works, but only in ideal circumstances. Many roads do not have painted lines on both sides of the lane, and the automatic steering will deactivate if it can’t read the lines. Even with ProPILOT activated, the Leaf driver must always keep their hands on the steering wheel ready to “take over” if the system deactivates.

Though Nissan’s stated goal with ProPILOT is to reduce the driver’s stress by removing the need to accelerate, brake, and steer, I found it more stressful not to be in total control of a vehicle that might decide to quit being autonomous at any moment. As well, I found that if the car is doing the driving for you, there is a natural temptation to lose your focus. For me, semi-autonomous doesn’t work. Fully autonomous might be viable, if the technology evolves far enough.

The Leaf’s cabin is roomy and nicely finished with plenty of headroom and foot room. However due to the battery’s position under the rear floor, the rear passenger floor is a bit high, creating a “knees-up” situation for adult rear passengers.

My only criticism here is that the centre screen seems rather small and difficult to read at a glance.

The unusual transmission shift lever is a small knob on the centre console that can be swivelled left and down for Drive or B mode, and up for Reverse. A button in the middle of the knob activates Park. Eco mode and e-Pedal buttons are found just ahead of the transmission knob.

The Leaf has a very roomy 668 L cargo area with a wide, tall cargo opening. However, the floor is about 10 cm below the trunk lip which means that heavy objects have to be lifted out over the ledge rather than slid out from a level cargo floor. As well, our top SL trim had a stereo amplifier bolted to the trunk floor near the seatbacks which further reduced usability. Another gripe: when folded down, the split folding rear seatbacks sit above the cargo floor making it more difficult to slide in long objects all the way to the front seatbacks.

Base Leaf models are well-equipped, but if you want the 7-inch touchscreen, navigation, Apple CarPlay/Android Auto, blind-spot warning, rear cross-traffic warning, and ProPILOT Assist, you have to move up to the mid-level Leaf SV. Top-of-the-line Leaf SL adds leather seats, Bose premium audio, Around View Monitor, and Driver Attention Alert.

A free smartphone app is available that allows Leaf owners to remotely schedule charging times and monitor the car’s state of charge, pre-heat or cool the car’s interior, and find charging stations while on the road. 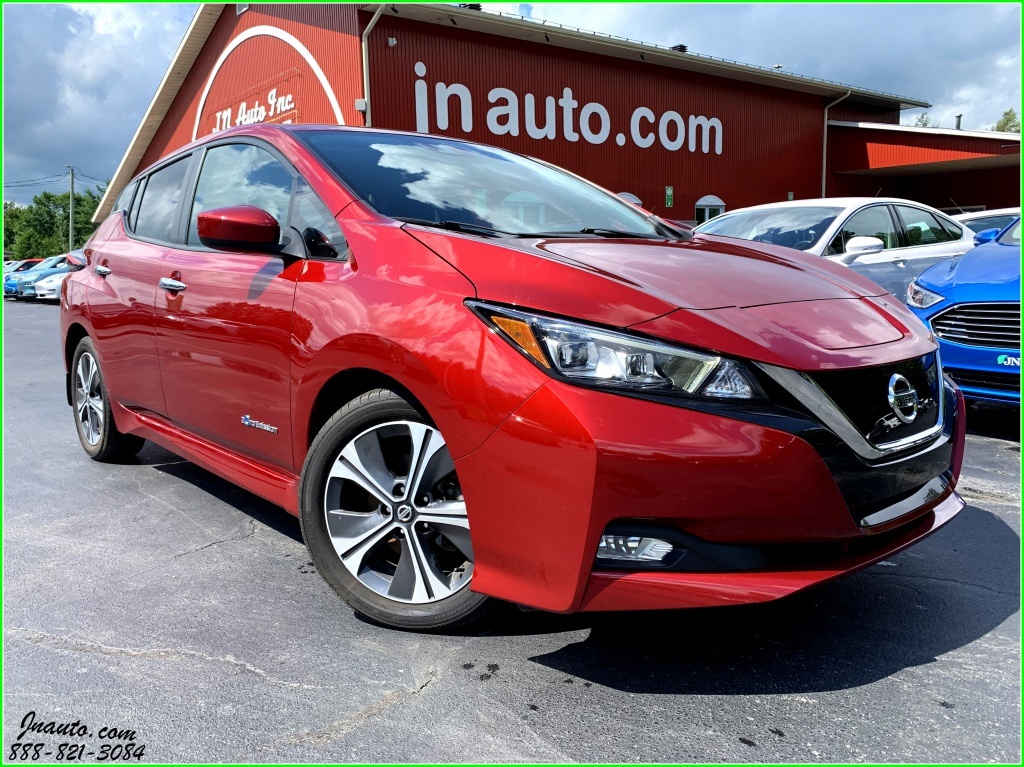 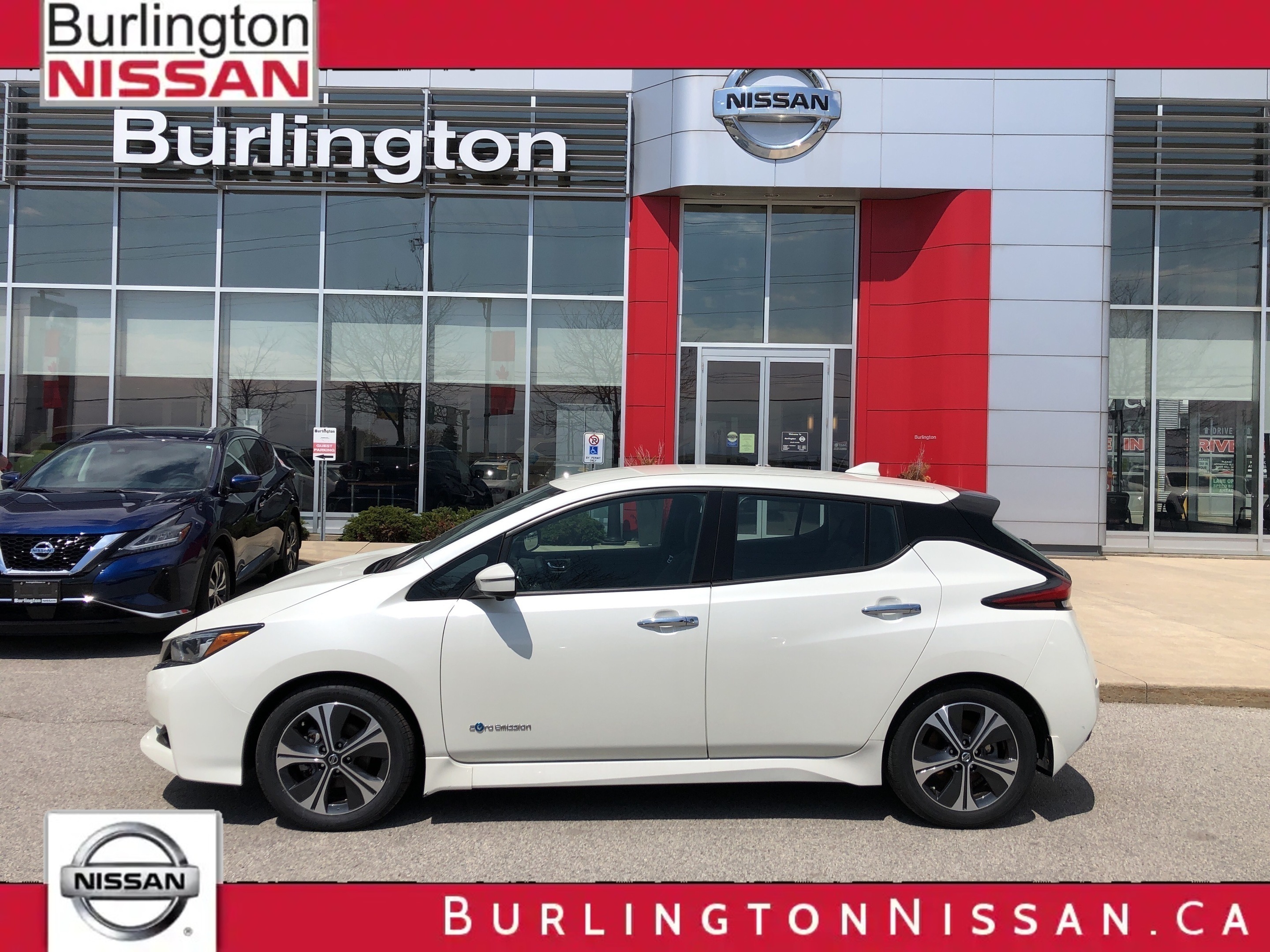 All Leafs come with a portable 120V/240V charging cable that can be plugged into a standard household outlet or 240-volt outlet (similar to the one for your clothes dryer). That means Leaf owners don’t need to have a wall charger unit installed in their garage if they have a 240-volt outlet installed there.

The Leaf’s electric propulsion system is covered by a five-year/100,000 km warranty that covers the electric motor, inverter, onboard charger and charge cable, inverter unit, VCM, reduction gear, and DC/AC converter. The main lithium-ion battery is covered for defects or workmanship for eight years or 160,000 km, whichever comes first. Nissan will replace the battery if its energy capacity falls below nine bars out of 12 as shown in the instrument display.

Sometime in 2019, Nissan will also offer a new higher power, longer range version of the Leaf at a higher price as well as the standard 2019 Leaf, which as noted, is already on sale.

About Greg Wilson
An automotive writer for over 30 years and co-founder of one of Canada’s first automotive websites, Greg Wilson has moved into the editorial slow lane and now contributes occasional vehicle reviews and features to autoTRADER.ca’s editorial section. Greg is a member of the Automobile Journalist’s Association of Canada.
Follow me
You may also like
8.2