What’s the best enthusiast vehicle you can buy in 2018? Some would say the re-worked Mazda MX-5 is a worthy contender, its critically acclaimed dynamics improved by a lighthearted new engine. Other votes might go to the Chevrolet Camaro or Ford Mustang, offering a broad appeal from accessible fun to all-out brawn. Really, though, there’s one candidate that blows all their doors off.

The Wrangler checks pretty much every box for a family that’s looking for something beyond the more boring choices.

In fact, it blows its own doors off. How’s everybody else supposed to compete with that?

Truly, we exist in a golden age for anyone who wants something more than a vanilla family crossover (and, if we’re being honest, life’s pretty good for those who’d rather not worry too much about what they drive). Not only is there a huge selection of vehicles from which to choose, but compromise has been taken off the table in most cases. Muscle cars no longer spear off the road under braking. Pickup trucks corner calmly through highway sweepers, carrying all the speed the law will allow. And as for the Jeep Wrangler, the folding shovel of the automotive world, using one as an everyday prospect is about as difficult as wearing a pair of jeans. 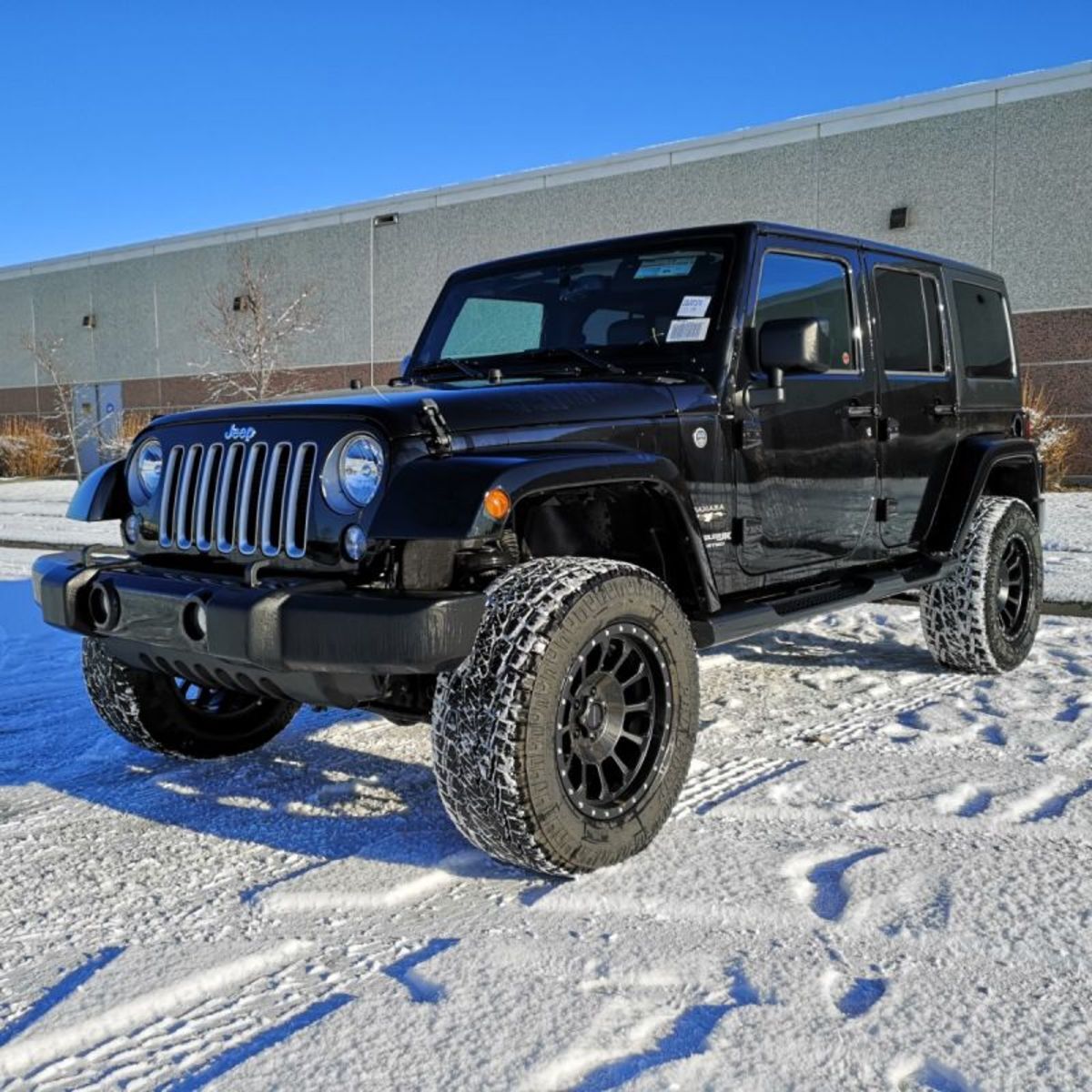 Expensive jeans. Base price on this four-door 2018 Wrangler Unlimited Sahara, Jeep’s bread-and-trail-butter model, is a not-inconsiderable $46,245. Optioning up with navigation, towing package, LED headlights, and an eight-speed automatic sent the total bill creeping toward the $60K mark. Starting with the more-extreme Rubicon model and checking every possible box will produce figures that aren’t far off Hellcat money.

A pedigree of capability

All of which seems faintly ridiculous for a machine that’s supposedly built to go get pinstriped courtesy of a stand of alder trees. However, by the middle of this year, the Wrangler was solidly in the top ten for volume when measured against popular crossovers. The Wrangler outsells the Mazda CX-5, Hyundai Tucson, and both the Ford Edge and Explorer.

Perhaps it’s that the Jeep’s initial price tag is offset by the sort of resale figures you’d normally see from a Subaru product. Or perhaps it’s just that the Wrangler is great fun to drive, on-road or off, with any flaws it does have feeling like character features rather than drawbacks.

Hellcat, Mustang, MX-5, Camaro: pick any of the vehicles I’ve mentioned thus far, and ask yourself if they spend more or less than 5 percent of their lives approaching anything like the limit of their capabilities. I’d say no, but there’s something joyful about having that potential under your foot or in your hands.

It’s much the same thing with the Wrangler, which I inadvertently subjected to the ultimate urban warrior stress test.

All this week, I’ve had to ferry back and forth three times over the Lion’s Gate Bridge into downtown Vancouver, acknowledged as one of the most congested commutes in North America. Both kids were enrolled in an artsy-crafty summer camp, with the younger one being done a little earlier in the day, and that meant the Jeep was less gravel express and more dad shuttle.

Stop-and-go traffic. Drivers who turn without signalling. Pedestrians who occasionally cross wherever they want. Cycle couriers apparently raised on amphetamines and Frogger. Navigating through Vancouver’s downtown core is something best done in a nippy little runabout like a Smart ForTwo.

Or, alternatively, in a big square box with the sightlines of a plexiglass cube. The Wrangler Unlimited may be bulkier than you’d theoretically want from a city vehicle, but the combination of easy-to-see edges and a tendency for people to give you a little extra room makes up for the large turning circle. It’s also not too tall to squeeze into even older, low-ceiling underground parking.

Plying the car-infested roads of downtown gave me plenty of time to get to grips with the Wrangler’s new interior, which is crammed with cutesy “Easter Eggs”, and looks like a Caterpillar-branded playset for children. The infotainment, which is shared with many FCA products, is bright and clear and easy to use.

Everything else is great: there are rubbery switches and knobs, easily directed air vents, and a shifter the size of a tractor piston. Which, if you didn’t get the point, has a little Jeep emblazoned on it.

Subtlety, thy name is some other manufacturer. From the Lilliputian animated Jeep that drives across your odometer reading when you hit the start button, to the crossed pick-and-shovel on the all-weather floormats, the Wrangler is a tourist trap on wheels. If it didn’t have the bones of a real off-road machine underneath, it’d all be a bit too tongue-in-cheek to be bearable, but as it is, there’s something charming about it.

And, as far as the kids were concerned, this was the greatest vehicle I’d had in the driveway for weeks. The Wrangler appeals to that same antediluvian, mud-spattered part of the brain that makes the Land Rover Defender or Mercedes G-wagen such perennial favourites. They loved the climb up into it, they loved the round headlights and crayon-drawn styling, they loved the rubberized interior and windows they could see out of. When I told them you could remove the doors and roof, their eyes got wide as saucers.

Not that we took the doors off, naturally, what with rain in the forecast – but you could. But “You Could” is kind of the whole point of having a Jeep.

Beyond being quirky enough to be likeable, the Wrangler proved thoroughly useful as an ordinary workhorse. Car seats installed easily, and were at a height that pulling them out again was straightforward. Before I took the Wrangler off-road, I took it to the dump, and the two-step folding rear seats were as simple to use as in any other consumer-oriented product.

Maybe too playful for the concrete jungle

Character-filled, inside and out, and also useful for daily domestic duties, Wrangler first impressions were very good. And then there’s how it drove.

Equipped with a 3.6L V6 that makes 285 hp, and an eight-speed automatic transmission, the Wrangler is both quicker than you’d expect, and also slows your driving down. Acceleration is excellent, and with the shifter in automatic four-wheel drive, the Jeep doesn’t spin its rear wheels in the wet.

However, the barn-door aerodynamics provide plenty of audible clues to how fast you’re going, and the steering requires lots of constant nudging to stay on course. It’s not annoying, more that the Wrangler doesn’t provide the sort of isolation chamber we’ve come to expect from our vehicles. Arguably, that’s a benefit, although on longer excursions the noise and fidgeting could become tiring.

It’s like the Wrangler’s behaviour over speed bumps. Take it over a sleeping policeman, and it wobbles around, snapping your head back and forth like that scene from the second Ace Ventura movie. It’s a bit hilarious from time to time, but if you have to navigate several speedbumps every day, you might get a bit weary of the safari-style ride. Using a Wrangler as a commuter is entirely doable, and certainly much easier than it used to be, but this is no car-like crossover. There’s also plenty of creaking and occasional rattles with the removable top.

However, from Monday to Friday, I Jeeped around town, waving to the other Jeepsters (who waved back happily), and just generally enjoying the feeling of cosplaying as a real-life off-roady person. Then, come the weekend, I called a friend in Squamish, asked about forest service roads, and went to do some actual capital-J Jeeping.

The Sahara is not a Rubicon, and as such doesn’t come with the ability to climb ridiculous sheer rocks and really difficult terrain. If you plan on making severe off-roading part of your daily weekend schedule, then consider upgrading.

What the mid-grade Wrangler does have is a huge depth of talent that lets you venture onto deactivated roads with confidence, knowing that you have plenty of reserves to call upon. The Wrangler scrabbled up dusty hills, whomped around through basketball-sized rocks, crossed dry creek beds, and crawled over berms cut in the road to divert water.

It flew down smoother gravel roads with ease, riding with far more comfort than expected even over the washboard. The back-up camera made turning around in tight sections a cinch. There was never any need for a terrain-selection system as the road was occasionally rutted but in relatively good shape, but the Wrangler easily handled sharp ascents and descents with the kind of aplomb that encouraged further exploration.

Again, I wasn’t really testing the Wrangler’s limits here, merely taking it on a good long hike into the underbrush. But the rougher the trail got, the more fun I was having, knowing that it would be easy to get back out again. BC is more than twice the size of California, and a vehicle like this Jeep unlocks huge swathes of land, with forestry roads stretching deep out into the woods.

All sorts of gems wait out there to be discovered, from little-used hot springs, to pristine lakes, to star-dusted skies far from any light pollution.

Fun on the tarmac, and more fun off it, the Wrangler checks pretty much every box for a family that’s looking for something beyond the more boring choices. The kids love it. Other owners smile back at you. It works for your everyday, then unlocks the backcountry in your down time.

What’s the best enthusiast vehicle on sale today? That depends: are we measuring acceleration times, lateral Gs, or just the size of the grin on your face behind the wheel?

About Brendan McAleer
Brendan McAleer is a Vancouver-based automotive writer, a member of AJAC and a ginger.
Follow me
You may also like
7.6