I thought I was going to lament the demise of the Nissan Juke more than this.

Affordable and trendy in just the right ways.

I always liked the Juke in a cheering-for-the-underdog sort of way. Sure, it was bug-eyed, cramped, and had next to no cargo space, but it was fun and quirky and full of character. And there was a Nismo version to boot!

When I first saw the Nissan Kicks on the show floor in Los Angeles last fall and found out that it was going to be the Juke-slayer, I thought the folks at Nissan had lost their minds. It doesn’t look half as interesting, and it doesn’t even come with all-wheel drive! Which Canadians are going to buy these, exactly?

Well, that’s why I’m not in product planning: that whole Qashqai-plus-Kicks strategy for the subcompact crossover segment has turned out to be a brilliant one. The much more mainstream-looking Qashqai is there for people looking for a smaller crossover with features like all-wheel drive, and the Kicks is a lower-priced alternative just quirky enough to be a great fit for the younger urban set, most of whom can get by just fine with a front-wheel-drive vehicle so long as they spring for a decent set of winter tires.

As for the latter, I fit that demographic once. Were I in my late teens or early 20s today and shopping for my first car, the Kicks would absolutely be very close to, if not right at, the top of my list.

Think about it: at that stage of life, what are your priorities?

You want a car that doesn’t cost a fortune to buy and maintain, that’s good on gas, that feels fun to drive and spacious enough to haul your friends around town in, and that comes with styling and colour combinations that let you feel like you’re expressing a little bit of your own personality through your vehicle.

The Kicks hits every one of those marks.

On the pricing point, it’s the most affordable crossover in the country with a starting MSRP of $17,998. The SR model I tested is the most expensive in the line-up, and even it comes in at less than $25,000 – and that’s after the freight and A/C tax charges. (Sales tax will kick it over that line, though. They’re not miracle workers.)

For that, you get a 1.6-litre naturally aspirated four-cylinder engine. With its 125 hp and 115 lb-ft of torque that comes in fully at 4,000 rpm, it’s definitely not the most powerful tiny crossover on the market. But it’s only got 1,215 kg of weight to throw around – less in the trims below SR – and so while it seems like it should be intolerably slow, it really doesn’t come off that way. I mean, it could be better, but it’s liveable, and it’s probably fair for the price point.

More important, though, is how that low weight pays off in handling. The front suspension is made up of independent struts plus a stabilizer bar and the rear is a torsion beam, a combination that keeps the Kicks nice and flat while it pops in and out of city traffic with energetic ease. It might not be the car you want for frequent highway runs or spirited weekend joyrides, but the urban environment it was made for is where it excels.

It’s also a frugal choice at the pumps. Not having to drag a lot of weight or an all-wheel drive system along, plus the efficiency of a continuously variable transmission, leads to a rating from NRCan of 7.7 L/100 km city and 6.6 on the highway. My final figure was a little over 8.0 across a week, but a fair bit of that driving was experimental and outside of my control. Even with my heavier-than-average right foot, I’d expect this to be a frugal one to maintain at the pumps. 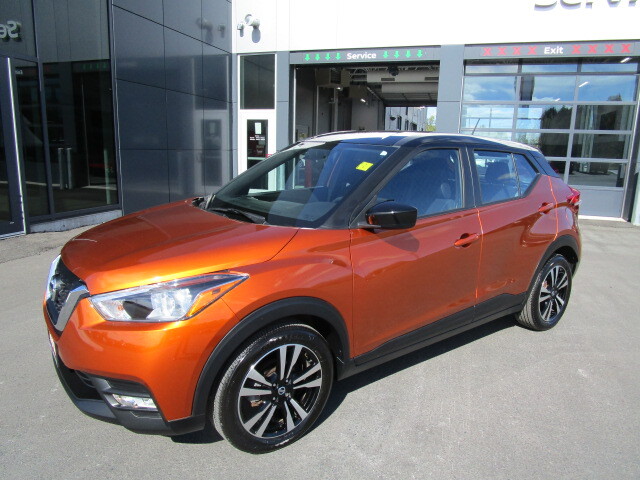 The Kicks doesn’t come in purple. Or lime green, like the Hyundai Kona does. I wish it came in some really wild colours. I think they would suit its character really well.

That said, there are some fun combinations available, especially in the higher price points, with the off-colour roof treatments that are decidedly on trend. There’s white with a black roof, red with a black roof, blue with a white roof, orange with a black roof for those who want to celebrate Hallowe’en all year round, and grey with an orange roof. (This last one took a while to grow on me, but it eventually did.)

The interior is a relatively flat charcoal across the board, but if you opt for the SR model then the upholstery changes to a synthetic leather-type material with orange stitching that gets mirrored with accents around the cabin, including a set of Bose speakers embedded in the driver’s seat headrest. I’m not sure how much of a practical difference that makes to the sound quality, but it sure looks cool.

One big selling point is that the Kicks comes with Apple CarPlay and Android Auto functionality – not as standard, but starting from the mid-grade SV model. That’s also where the two-tone paint combinations and heated front seats come into play, while opting for the SR adds in an around-view monitor, LED headlamps, remote engine start, a leather-wrapped steering wheel and shift knob, blind spot monitoring, and rear cross-traffic alert – not bad at all for under $25,000.

The 716 L of cargo space is also impressive given its size. If there’s anything else in its class that can match that, I haven’t found it.

Of Course, It’s Not Perfect

There are some gripes to be had with the Kicks, though many of them fall into the “Holy crap, how do you get through life being so particular?” category. Understanding that we’re talking about a budget crossover here and that expectations must therefore be managed, let’s dive in:

For city-dwellers who want a crossover but don’t have a lot of budget to put toward one – or just don’t want to buy more car than they need – the Kicks puts forward a lot of compelling arguments. It’s affordable and trendy in just the right ways to make it a great first car for today’s younger drivers.

About Stephanie Wallcraft
Stephanie Wallcraft is the child of an auto worker and honed her passion for cars in the grandstands of the Molson Indy Toronto. Today she continues the family tradition by writing about cars and motorsport for publications across Canada.
Follow me
You may also like
7.5