Throughout my adolescence, my older brother would invariably come home from a summer job with some form of automotive “project” to keep him occupied through the long winter months. I was about 12 when he showed up in a ’69 Mustang Mach 1, a flatulent, scabrous warrior that was nonetheless one of the most beautiful things I’d ever seen. You’d be hard-pressed to call it a “pony car”, as there was nothing small or cute about it. Blunt, wedge-shaped, backbone bristling with louvres, the Mach 1 was a feral beast decorated with battle scars.

The Mustang behaves well as a leisurely cruiser; but switch over to Track Mode, lose some of the electronic overlords – and you’d better know what you’re doing when you stomp on the pedal.

I’ve had an affinity for Mustangs ever since – and I’m not the only one. The iconic Ford recently became the top-selling sports car in history.

The Mustang has been molded and massaged into many different forms since it first launched in 1964 – and not all of them sublime. I think we can unanimously decide that the second-generation, Pinto-based abomination was not only the worst Mustang to roll off the production line, but possibly one of the most loathsome cars ever produced. The current generation, unveiled as the company celebrated its 50th anniversary, expands the Mustang’s fanbase beyond its home borders by taking America’s favourite pony car worldwide. The Flat Rock, Michigan-built Mustang is now available in 140 countries – and for the very first time, can be had in a right-hand-drive configuration.

More than a few decades have passed since that battered Mach 1 rolled in to – and out of – our lives, and I’ve since enjoyed many memorable drives behind the wheel of countless Mustangs – including 5,000 km around the perimeter of New Zealand in the country’s first right-hand-drive model last year.

Now in its sixth generation, the 2018 Ford Mustang has received several significant updates, both inside and out. At first blush, our GT Premium Convertible may appear unchanged from the previous year, but subtle stylistic changes emerge to create a more dynamic profile. The bulging hood has been lowered, which not only makes the car look sleeker, it becomes more aerodynamically efficient. The lower profile also alters the depth of the front fascia, which now has a more forward, canted shark nose with narrower headlight clusters – now with standard LEDs. The rump receives a nip-and-tuck befitting a sports car, with a more aggressive rear diffuser, and in the case of our GT tester, new quad exhaust tips. The characteristic sequential taillights are more sharply defined and also feature standard LEDs across the model lineup.

While not really a convertible fan – I prefer the smooth, uninterrupted roofline of a coupe over even the most cleanly executed cloth top – the 2018 Mustang certainly makes a good first impression. It’s an interesting colour that the spec sheet refers to as “Royal Crimson” – one of three newly available paint colours; the others being “Orange Fury” and “Kona Blue” – but it’s more of a deep burgundy. Matte black racing stripes, 19-inch painted split-spoke aluminum wheels, and black cloth roof round off the look.

Every model now has new shock absorbers, revised stabilizers bars and a new cross-axis joint in the rear suspension to improve lateral stiffness. To compliment the improved handling, the burly 5.0-litre “Coyote” V8 has been tweaked to produce more power with greater efficiency. Horsepower increases from 420 to 460, and torque from 400 to 420 thanks to a number of measures; a new thinner spray-in cylinder liner that increases the bore and raises the displacement from 4,970 to 5,030 cc, and new cylinder heads with port and direct fuel injection – a dual system that delivers a direct punch for instant power at high revs, and the quiet efficiency of port delivery. A new plastic oil pan adds lightness, and redline is pushed to 7,500 rpm from 7,000. The V8 comes mated to either a new 10-speed automatic transmission, or the revised six-speed gearbox of our tester. Ford no longer offers a V6 option in any Mustang; the base engine is now the EcoBoost 2.3-litre, turbocharged four-cylinder. 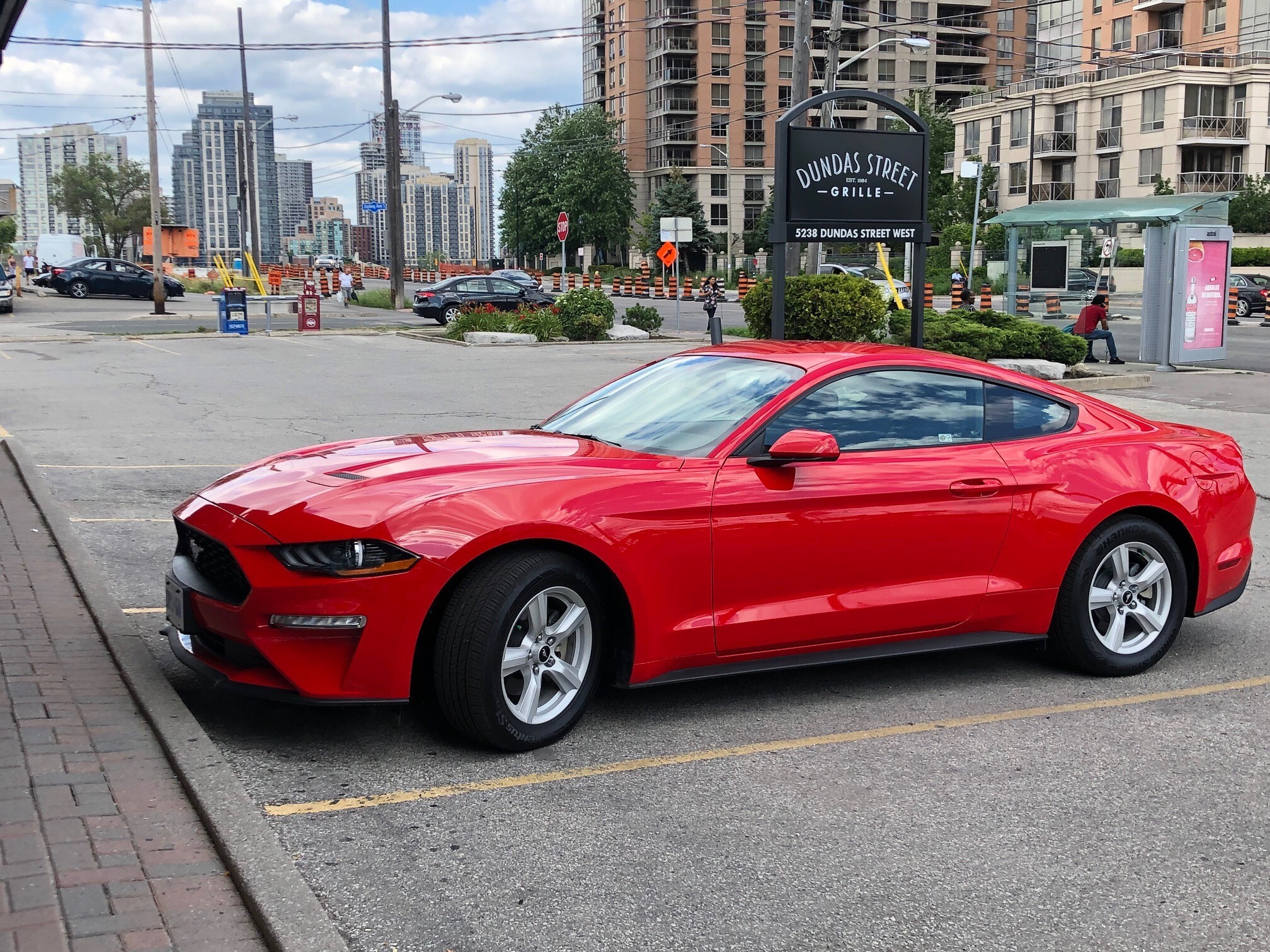 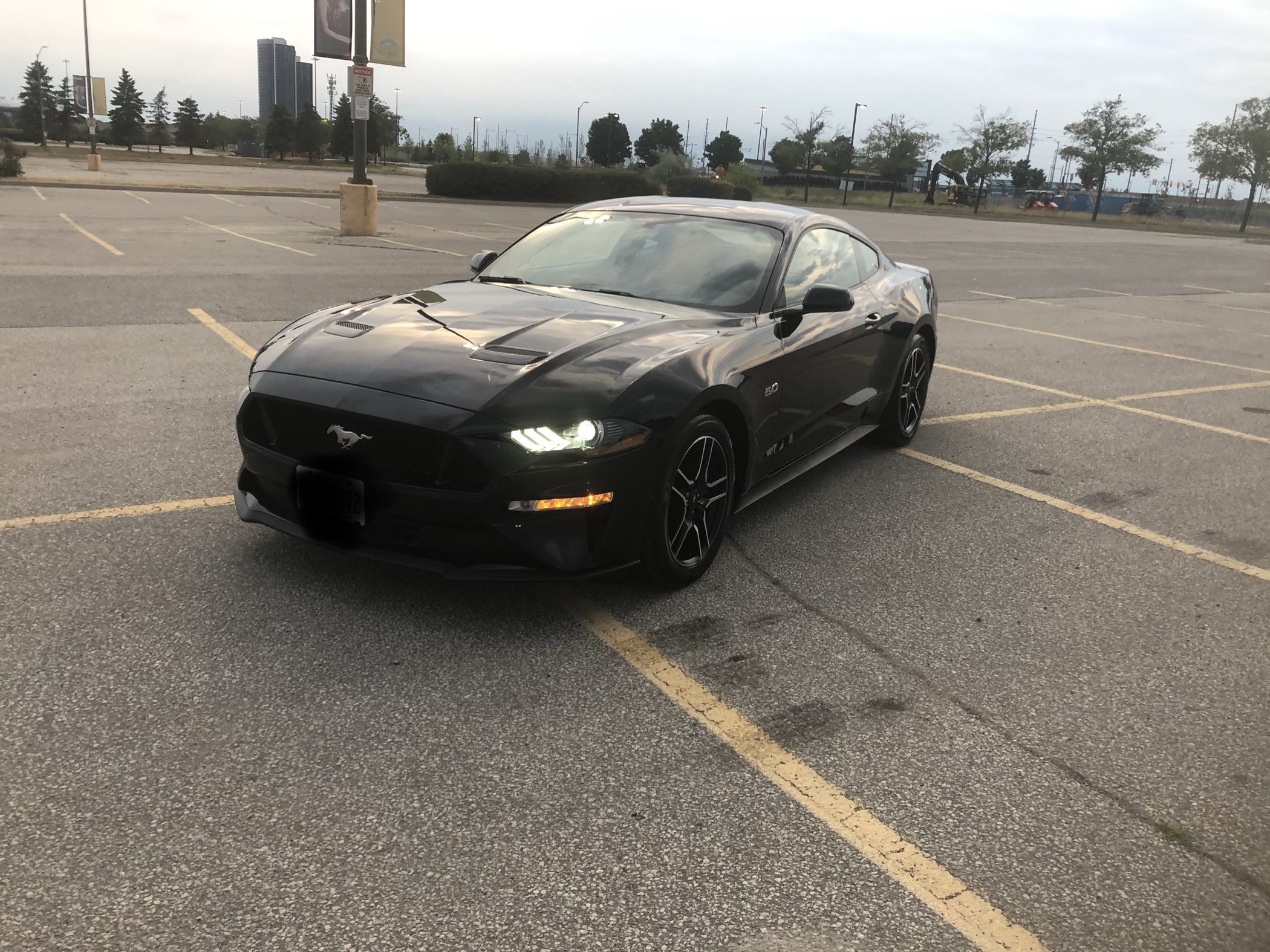 The interior’s been refreshed too, with more colour and material choices, and the analogue gauges have been replaced with an all-new 12-inch LCD instrument cluster, that lets you personalize font and colour, and customize the gauges with a choice of normal, sport, or track mode displays. And for the first time, the pony car is now available with a heated steering wheel – the Holy Grail of comfort options in our climate.

Our tester’s cockpit features lots of black leather with contrasting stitching, augmented with satin finish aluminum instead of the previous chrome. In typical sports car fashion, the bucket seats are highly bolstered and quite comfortable – but the rear seats are awkward to access and quite cramped once you’ve managed to wedge yourself in. Looking on the bright side – it’s a great excuse to avoid taking passengers with you when out for an enjoyable drive.

Moving off, one of the first things you notice about the new GT is how refined the clutch and shifter combination has become. Previously, the clutch take-up was somewhat heavy, and the shifter overly notchy – making it difficult to be smooth. And borrowing technology from the GT500, the revised transmission features better shift ratios, a dual-mass flywheel, and twin-disc clutch. It’s now delightfully easy for hands and feet to work together intuitively without any abrupt and ugly downshifts.

The revised 5.0-litre emanates a healthy burble without any harshness. Speaking of sound, there’s a steering-wheel-mounted button that lets you muffle the V8’s song to a respectable purr, or unleash the bellowing hellhounds. And thanks to the neighbours of one Ford engineer, who grew tired of listening to his GT350’s raucous morning start-up – there’s now a “Quiet Start” mode to prevent you from becoming the neighbourhood pariah.

Dynamically, the Mustang keeps getting better and better. The coupe is a better choice as a track car, but the ’vert is stiff enough to handle a winding road without cowl shake or body roll. There are four selectable drive modes to choose from: Normal, Sport, Track, and Drag – which adjust the damping stiffness and responsiveness accordingly.

There’s admirable grip from the wide Michelins, but make no mistake – it’s still fairly easy to break the rear tires loose. The Mustang behaves well as a leisurely cruiser; but switch over to Track Mode, lose some of the electronic overlords – and you’d better know what you’re doing when you stomp on the pedal. Six-piston Brembos up front rein it in nicely. Turn-in is very lively and the electric steering, while not as communicative as the more hardcore GT350’s, is still crisp and nicely weighted.

Dropping the top is an easy exercise that entails turning a handle to unlock it, pressing a button, then sitting back to watch it unfurl. Although I despise the taste of my own hair, and loathe cleaning the sand, grit, and occasional dead bug out of the leather crevices, I must admit that top-down cruising is not without its charm.

The Mustang GT offers a lot of performance and horsepower for the money – but start adding features and the price climbs rapidly. It starts as low as $46,425 for a GT V8 Fastback, but it you want the convertible, it jumps to $52,005. Add the Performance Package (which you should) and the MagneRide Dampers (which you must) and a few other assorted goodies, and the final tally for our tester was $66,088.

For about ten grand less, I’d take the GT Fastback with all the performance goodies and have enough left over for a set of cheesy window louvres, in homage to that Mach 1 of so long ago.

About Lesley Wimbush
In 5th grade, Lesley traded drawings of muscles cars for chocolate bars and things really haven't changed much since then.
Follow me
You may also like
7.4