I’m some hours from home, cruising contentedly up Highway 400 towards Sudbury in the new JL-generation 2019 Jeep Wrangler Unlimited Sahara.

There’s a 77-inch Ikea countertop in the cargo hold behind me. I didn’t figure this would fit, but the Unlimited model’s extended wheelbase and added space proved me wrong.

Wrangler has been available in said Unlimited designation for some years now, stretching things out, enabling a usable cargo hold, and (most importantly), clearing space for a second set of doors. Go with the Unlimited to turn Wrangler from a 4x4 two-seater with a small cargo hold (or a cramped four-seater with a teensy morsel of cargo space) into a family-ready off-roader.

This Unlimited model was one of was one of many recent steps that intended to make Wrangler more appealing to the masses.

Other changes followed, including the recent addition of the Pentastar 3.6-litre V6, which turned in decreased fuel use and (much) improved performance. And so, here I’m cruising at 108 km/h, in eighth gear, with the revs just off of idle to help keep fuel consumption to (relatively) reasonable levels.

Feature content was added too. Modern touches like navigation, Bluetooth, push-button start, and no shortage of other goodies and flauntables helped make Wrangler more everyday appealing to even more shoppers.

The market took note. Wrangler has been selling strongly for years, the factory that builds them can barely do so fast enough, and it has become a trendy ride with brand recognition envied by marketers everywhere.

And sure: Wrangler remains a rough-and-tumble off-roader, first and foremost.

It’s built like a truck. It enjoys fuel. It’s fairly noisy. It’s a machine that requires acceptance of various compromises in exchange for its talents. It’s not for everyone.

But tweaks like the above helped make it more relevant. And, for the latest JL-generation machine I’m driving north this evening, it’s apparent that Jeep didn’t try to soften the thing up or dull it down, but also that they realize added family-friendliness and comfort and tech never hurt anyone (or the sales figures).

So, Wrangler has become a friendlier thing to drive while maintaining much-loved attributes in full.

I’m cruising at a tick past 100 km/h, and wind noise hasn’t yet become massive, though it’s definitely present. Blame the aerodynamics. Have you ever dry-swallowed an adult multivitamin? That’s about how easily the Wrangler slips through the air.

It’s perhaps a tad quieter than the previous-generation machine, but not much. The new Wrangler is full of upgrades, but highway cruising noise levels aren’t the most compelling among them.

The ride is – to a point. A perpetual wriggle-jiggle remains when encountering most bumps, and it’s not uncomfortable on smooth highways, but feels, intentionally and by design, tougher and more truck-like than a car-based crossover. Pros and cons here, but the ride is easily acceptable by the shopper who wants real off-road capability, and a (considerably) more rugged and durable feel on rougher tarmac and trails.

On my weekly drive, you know you’ve returned to Sudbury when the suspension begins taking abuse from the road beneath. The late fall weather took a toll on our roads, which are missing chunks of pavement large enough to prompt an out-loud apology to your vehicle if you hit one.

But in Wrangler, it feels like the pavement craters are getting the lousy end of the deal: you whack these potholes without much discomfort or noise, and minimal sense that you’ve (maybe) broken something. Also, unlike most crossovers, Wrangler’s suspension takes a pummelling without the sort of rhythmless smashing, banging, and clattering that calls a sixth-grade music class drum section to mind.

In locales with equally terrible roads, driving something like this can make a lot of sense. The density and toughness dialled into the suspension convey, in no uncertain terms, that you’re driving something built to handle nasty surfaces.

So, as with the wind noise, those coming to the new Wrangler out of a last-generation unit will feel right at home – even if the ride now feels more fine-tuned, a little softer, and more forgiving, more of the time.

Steering, too. Notes from past test drives indicate a substantial improvement: it’s still vague and devoid of meaningful feel, but the ratio and effort now seem more expertly calibrated against the setup of the suspension. The steering is more precise in your hands, and I found less need to constantly issue a stream of corrections to keep the vehicle centred in its lane. You’ve got less work to do with this steering system, and less often. 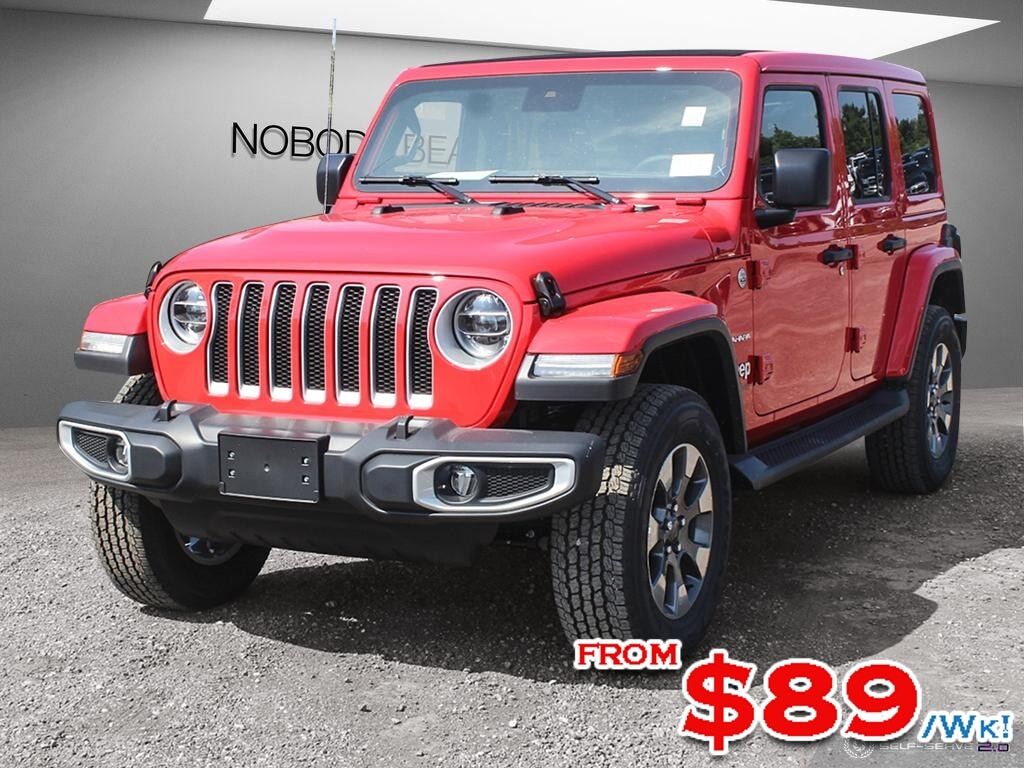 The 285 horsepower V6 is perhaps most impressive when used gently – since it’s got loads of low-end pulling power, barely makes a peep, and barely needs to rev much past about 1,800 rpm around town. Here, it’s smooth, quiet, and refined, and the available eight-speed automatic (a six-speed stick is standard) shifts up often and early and smoothly.

Hammer on it for a quick pass, and Wrangler fires along with nearly startling urgency. Given the handling, high-speed use of this machine is not advisable, though it rips something fierce when required. The big V6 is also nice to have if, say, a Toyota FJ Cruiser gets all up in your business at a set of traffic lights.

The headlights are a knockout upgrade from the last-generation machine. My tester ran a set of optional ($895) LED lamps that perform as well as any of the best I’ve ever encountered at or near this price. Light is white, thick, even, consistent, and bright, slathering a good portion of the road ahead. Peripheral illumination is exemplary, with heaps of light cast into the roadside and culverts and treeline after dark.

Fog lamps (also LED-powered) provide a big boost in lighting immediately in front of the vehicle, adding useful light when manoeuvring in busy streets near pedestrians and cyclists and people and pets. Finally, the high-beams provide loads of engagement of reflective signage and surfaces up the way.

And, since wildlife collisions are common along the lonely and dark stretch of Highway 69 approaching Sudbury, Wrangler’s exemplary peripheral illumination provided some much-appreciated early warning of hazards. All said, this lighting system was a pleasant surprise, and among the best I’ve ever used, ever.

Elsewhere on the visibility front, don’t miss the back-up camera: the bright and vivid screen parades the sort of big and high-resolution readout typically found in a luxury rig, it performs decently in low light, and it’s easy to see plenty of detail from a mere glance. If you’ve ever thought your back-up camera graphics look like something from a Sega Genesis, you’ll love this setup.

There’s another major tweak that does really big things for the overall package: the interior. Hop on up, and you’re flanked by stitched leather and metal accenting and loads of useful small storage nearby.

Wrangler’s latest cabin feels more upscale and rich – and unlike the crossover masses, does its own thing on the styling front by fully embracing its thin and upright dash, but decorating it with modern, beefy-looking switchgear that’s logically placed and easily manipulated. It’s nicely arranged and presented, lustrously trimmed, and all glistens before you like a Christmas ham on the cover of Chatelaine.

The controls are all easily worked – even by thickly gloved hands – and designers deployed modern control buttons and dials that all operate with a smooth and light and satisfying action. Even the shifter slips through its gate with a fingertip-light and well-lubricated thunk. Next to that, the 4x4 mode lever provides tug-to-toggle access to 2-wheel drive, 4-wheel auto (which works like AWD), 4-high, and 4-low.

Just above this, you’ll find the best touchscreen infotainment system in the business, too. Pair your phone, change your settings, and get to clicking away: this unit is no more difficult to understand, set up, or use than an area rug.

You climb up to get in, you and everything around you are very upright, a commanding forward view is afforded, and there’s room for two adults and their things up front, no problem.

Rear seats are adult-friendly for those of average size, easy-peasy for smaller passengers, and the overhead roof bar seems thinner and further from rear-seat occupant craniums than before, reducing the chances of taking metal to the dome.

Wrangler’s cargo hold is accessed with the same flip-up glass and pull-out door as earlier models. Mostly it’s square and wide, though space is eaten up slightly by wheel wells, a subwoofer, and the roof bar. It’s roomy enough, more so if you stack as much gear as possible into tall, square boxes to maximize the space.

Ultimately, here’s the latest version of an original work that’s been improved throughout, while staying fully in stride with its soul. Standard Wrangler gripes are a given, though now dealt with from a more upscale cabin, with a more comfortable ride, and with more effective and easier-to-use tech and features than ever.

Just prepare to open your wallet. Wrangler is more in demand, and more advanced, than ever – and pricing has been adjusted accordingly. Today, a barebones unit starts the bidding at about $34,000. My Sahara Unlimited tester, with plenty of options, clocked in at about $57,000. Though the effective features, added refinement and (especially) the knockout new cabin fully support this, it is a big, big ask.

Still, Jeep won’t have any trouble selling every unit they can build, to folks who prioritize rugged toughness, brand recognition, and adventure-ready operation more than all-out comfort and fuel efficiency.

And a final thought: though pricey, remember that a unit like my tester is a 285 horsepower, all-wheel-drive convertible – meaning that weekend family fun-mobile you may be dreaming of comes built right in.

About Justin Pritchard
Justin Pritchard is an automotive journalist, consultant, TV presenter, and photographer based in Sudbury, Ontario.
Follow me
You may also like
7.5