The Lincoln Navigator has the best ride quality I’ve ever experienced in a utility vehicle. It also costs $100,000 and has suspension made of airbags, so of course it does.

The Ascent is a tank. It’s the biggest thing Subaru builds, next to its offices and factories.

For those without six figures to throw at a family hauler, and for those not keen on living in fear of owning an out-of-warranty airbag suspension, there’s now another option that comes close on the ride-quality front – at something like half the money.

You’ve read about it, you’re reading about it presently, and maybe, you’ve been browsing photos: but the first thing about the new 2019 Subaru Ascent that really bops you right in the schnoz when you first meet it in person is its size, followed closely by its ride quality.

The Ascent is a tank. It’s the biggest thing Subaru builds, next to its offices and factories. A lengthy saunter is required to travel from front to back, and you could practically drive a Honda Fit through the door openings.

This generously proportioned crossover was concocted to give shoppers a modern, Subaru-built option in a three-row crossover – and now, outgrowing your Forester or Outback no longer requires a teary-eyed goodbye to Subaru before you head off to buy an Acadia or Explorer or Pilot.

The Ascent moves Subaru’s presence into the three-row crossover scene in a very hefty, and mostly compelling sort of way.

The largeness of this machine has numerous benefits.

The door openings are hilariously large, while flat and thin rocker panels make for an easy step in and out. Since Ascent sits at roughly minivan height from the ground, there’s minimal climbing up or plopping down required to board and exit. You just slide over and into your seat, and that’s even if you’re carrying a double-armful of shopping, a toddler, or an 80-pound golden retriever (I checked) who isn’t sure if he wants to hop into this strange four-wheeled house.

Mobility-challenged folks may have little issue getting in and out as well – as the door openings are, for instance, recent-hip-replacement-friendly, and easy for most anyone to pass through without much ducking or twisting. The Ascent’s door openings won’t cause you any stress.

Second-row seats are much the same: my testers dual captain’s chairs reclined, slid fore and aft, and folded flat to accommodate longer, wider gear when required. I stuffed the back of the Ascent full of Ikea bookcases (I have many books strewn about carelessly, but not for long) and the 80-plus-inch boxes fit in with a smidge of room to spare.

Rear seats can physically fit an average-sized adult when needed, and access is simple, thanks to easily slid second-row seats that open up a generous walk-through path. As it tends to go, third-row seats are adult-usable in a pinch, but best left for the kids.

Further rearward, the great big cargo is accessed via a powered tailgate. With rear row seating stored, Ascent is a massively spacious cruiser for four adults and a holiday’s worth of camping gear, and the family dog. Fold all rearward seating flat, and you’ve got a small cargo van. Just note, the tall load-floor height may be higher than the feasible jumping-in height for some four-legged passengers.

You needn’t look much further than this machine’s shape to see why the cargo hold is so big: Ascent flaunts a generous rump that’s flat and square and gives up no space to facilitate a sexy slope to the roof or rear hatch. Those after room and flexibility to spare, for gear and occupants alike, will find Ascent covers things off well. You are literally more likely to be abducted by a herd of time vampires from Jupiter than you are to run out of room inside of this thing.

Also, Ascent is a great thing to drive in many a situation.

On my watch, Ascent felt most in its element while cruising the highway at a good clip: here, it’s ghostly quiet on board, feels heavy and dense and solid, and rides with luxury-sedan comfort. Even at highway speeds and beyond, there’s no voice-raising required to converse with your nearest passengers.

The setup is comfort first, in its entirety. Given the size and mass at play, engineers tuned the elasto-kinematics beneath Ascent’s sheet-metal floor with an understanding that comfort, not handling or agility, will sell this machine. And provided you aren’t planning to fire your hefty family hauler around any corners at a high rate of speed, and prefer instead to be very comfortable at all times, you’ll like what the Ascent is cooking.

The comments above are from my experience in a top-line tester that rolled on a set of 20-inch wheels, which usually translate to a harsh ride on rougher surfaces. Indeed, these can coax elevated harshness and noise from beneath the Ascent, but this tendency is managed very well. It rides with more consistent comfort, more of the time, than just about anything comparable rolling on great big wheels.

All units run a 2.4-litre flat-four, turbocharged for 260 horsepower. Torque output clocks in at 277 lb-ft, available from just 2,000 revs. As modern turbo engines tend to, it serves up heaps of pulling power well before the engine is spinning fast enough to become audible.

Add in the paddle-shiftable CVT transmission that’s smooth as glass and mostly invisible, and you’ve got a driveline that’s uniquely expert at handling most situations without much (if any) noise or vibration – or any sign that there’s even an engine and transmission at all.

Push harder, and the turbo four flings Ascent along with authority. The transmission shifts via smoothed-out simulated upshifts, the signature boxer-engine growl seeps delightfully into the cabin, and all occupants get a hearty shove into their seats. 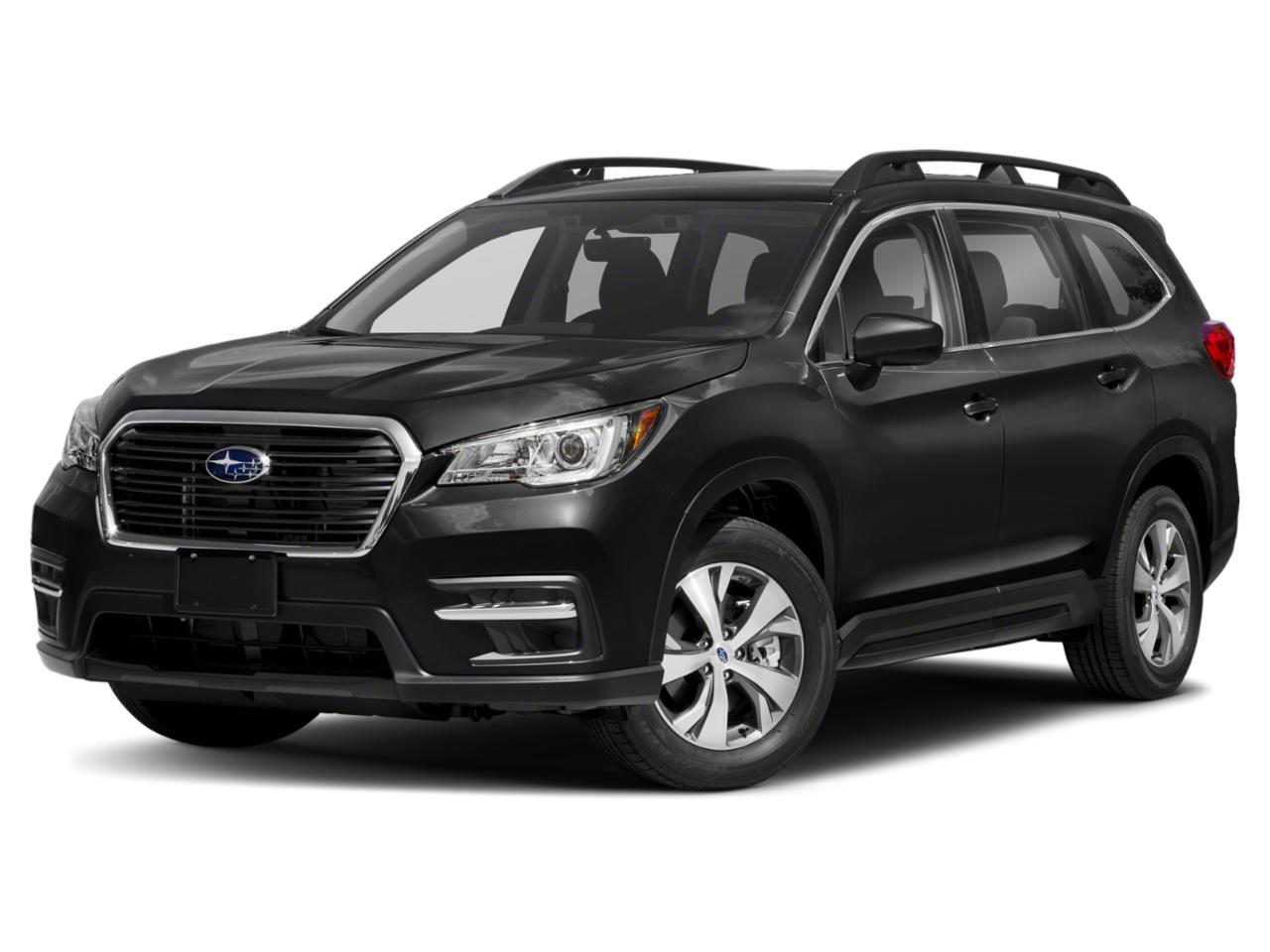 On board, the cabin has a unique selection of pros and cons. On all aspects of space and flexibility and having nearby storage cubbies for anything and everything you could conceivably bring on board, it hits the mark. There’s a big centre console storage bin. Giant door pockets. Cubbies and pockets and slots are generously deployed. I even fit a camera and multiple lenses into the centre console.

Do you have small things? Do you like having a place to put small things while you drive? No sweat: a handy notch carved through the lower edge of the dash serves as both a styling element and a handy place for items like pens, lip balm, wallets, and snacks. It’s also LED-backlit, which looks killer. Here’s a unique styling element that’s as handy as it is beautiful.

Thing is, the three display screens all look a touch primitive against the rest of the cabin’s design. The interfaces are powerful and logical and work well enough, but a dated display layout and typically blue-grey colour palette fail to generate the on-screen punch you’ll find in numerous competitor systems. It’s a near-luxury cabin, but display aficionados have sexier options when it comes to display screens (Durango, Atlas, Santa Fe XL, and others).

Here’s another gripe: for the first few moments of a cold-weather drive, Ascent’s transmission whines like an busted power steering pump in an old pickup, until the transmission fluid warms slightly. This usually takes a minute or less, though the sound seems unbecoming of a $50,000 vehicle nonetheless.

Also, some drivers will find the steering a touch too sporty for the softness of the suspension, which may require extra care for smooth steering at speed. If you’re not very gentle on the wheel, Ascent can lurch a little, as if you’ve startled it with your steering inputs.

The AWD works as expected: minimal wasted wheelspin, nothing required of the driver, and never a fuss to meander effortlessly through whatever sort of traction-related issue comes its way. Ascent’s AWD system expertly processes the surface beneath to keep you moving in seamless fashion. It always seems to know where traction is and is not, and makes excellent use of it: just point the steering and press the throttle and let the clutch packs and computers sort out the rest.

If you’re a winter driving fan, then the sort of weather that makes many a motorist reconsider their travel plans will see a desire to go for a drive burning in your guts like a suicide wing platter. Want to get frisky? Just fire Ascent into a corner hot, and jump off of the throttle, and Ascent gives you the gift of ovesteer and slips around slippery bends like a big, sassy rally car.

Even in conditions that see the AWD system busier than a one-legged man in an butt-kicking contest, nothing is detectable from the driver’s seat. My tester was rolling on a set of winter tires, which makes all of that stuff work even better.

Stops come quickly and in a straight line with minimal squirming, even in emergency situations on slippery surfaces.

All said, and as you’d expect, Ascent is absolutely beast-mode in the snow; and the worse the conditions you drive in, the more you’ll feel like you’re getting your money’s worth. That smug sense of satisfaction in conquering the elements from a comfortable seat is alive and well here.

First, the EyeSight safety system is predictable and confidently consistent in adjusting your position in traffic when using the cruise control, alerting you if you’ve left your lane, and advising you if you’re at risk of a rear-end collision. It’s very effective and never seems to get startled or miss a beat – though very occasionally, some steering corrections may feel abrupt.

The rearview mirror is a mirror, or a camera – whatever you like. In camera mode drivers get a better view out the rear, and one unobstructed by the car body or passengers or cargo. Also, very clever: the camera is inside the vehicle, so it stays nice and clean.

And so, all said, if very well-sorted cruising manners, excellent performance in inclement weather, and space and flexibility in abundance are high on your list of priorities, Ascent should be considered a must-drive.