I'm now at hour five in the 2019 GMC Terrain Denali today. Nearing the end of the usual whirlwind long weekend that marks my Christmas holidays, loading up persons and dog to embark on a day-long drive, in weather that is invariably miserable. Followed by a flurry of visiting and wondering why we drive to the wilds of New Brunswick instead of bringing everyone else to the relative warmth of the coast of Nova Scotia. While it's far from glamorous, this is what fancy family haulers like the GMC Terrain Denali are built for. Letting you cram more stuff inside than you ever thought possible and then making a miserable drive seem much more tolerable.

Clark Griswold never had it so good.

The long drive has me pondering the family car. And the Christmas vacation. And Christmas Vacation, the film I've watched every holiday season since I can't remember when. While I don't have Rusty and Audrey fighting in the back seat, I do have Morgan the dalmatian who needs a surprisingly large volume of stuff.

It's amazing how quickly the vehicular landscape, and the culture that moulds it, can change. Look no further than the Wagon Queen Family Truckster of 1983's National Lampoon's Vacation. As a result of how long it takes to bring a film to screen, it arrived late in its era. But what an era it represented. The days of the massively oversized family car, where a vacation for four people required so much luggage that it had to go on the roof. When 25 L/100 km didn't matter because gas was as cheap as water.

By 1989, the massive full-size wagon had been downsized to a much more appropriately sized Ford Taurus. Out with excess, in with right-sizing and economy. As someone who grew up in the back of a similarly sized Chevrolet Celebrity wagon, the mid-size wagon era resonates strongly with me. And not just with me, which is probably why wagons are so popular with automotive journalists around my age bracket. It's what we grew up suffering in.

In Vegas Vacation, though we shouldn't speak of that instalment, another eight years later, they're driving a rental minivan. Mid-size on the outside, gigantic on the inside. The minivan might never be cool, but boy howdy was it ever practical.

Today, the minivan has shrunk down. The wagon has been lifted up. We're firmly in the era of the compact crossover. A family that would have had an Oldsmobile Vista Cruiser would have by the 1990s probably downsized to a Cutlass Cruiser wagon. By the end of that decade, that apparently very Oldsmobile-loyal family would be in a Silhouette minivan. So what would they be loading a frozen tree onto in 2019? There's a good chance it's something like this GMC Terrain Denali.

GMC launched the all-new version of their compact Terrain crossover for the 2018 model year, at nearly the same time as the equally new Chevrolet Equinox. And while these two vehicles shared a platform and were part of a GM compact crossover lineup that now numbers four, each brand was careful to make each model unique. No more badge engineering at play here, aside from sharing expensive bits under the skin.

For 2019, GMC has made some real changes. The Terrain gets two active safety features that, in this class, were sorely lacking last year – front pedestrian braking, and adaptive cruise control – though both remain optional extras, even on the top-trim Denali.

GMC starts the Denali's upgrades with perforated leather seats. They get special Denali piping and an embroidered logo on the headrest. After five hours behind the wheel of the Terrain, I found the seats to be lacking in thigh support. The base of the seat is too short for drivers who are long of leg, leaving you with feeling a bit hanging off the edge. Adding adjustable bolsters here would add to driver comfort.

Beside the driver, the Denali adds wood accents on the left and aluminum trim on the right. The wood adds some needed warmth inside, though the aluminum trim is somewhat washed out by the light platinum interior colour of my test car. That said, I enjoy that GMC offers a light-colour option in a sea of dark interiors. If you've got a light-haired dog, it's a life-changer. If you've got spilly kids, maybe not so much.

Also beside the driver is what might be the most controversial feature of the new Terrain, that push-button gear selector. GMC has replaced a traditional console shift lever with push-pull buttons located at the bottom of the centre stack.

Do they take some getting used to? Maybe a few moments. Do they free up loads of space in the centre console, allowing for extra storage space and room for side-by-side cup holders? They absolutely do. My only issue with the buttons is the font GMC has chosen. It looks straight out of 1990s GM. Like I'm sitting in an old Jimmy. There's nothing functionally wrong with it, it just looks dated. Very dated.

Up front, thanks to the clever console, there is plenty of room for driver and passenger. There's also loads of space for snacks, chargers, phones, mittens, and everything else that gets dragged along on a family road trip. Pockets on the transmission tunnel and in the dash keep items secured and the six USB ports make sure everyone's electronics are charged up. There's also a wireless charging pocket that you can just drop your phone into. If it fits, at least. On stretches of highway where cell bars were fading, the integrated 4G LTE Wi-Fi hotspot seemed to always be able to pull in a strong signal and keep everyone connected.

Navigation on this trip is handled by GMC's 8.0-inch screen. This is the latest version of GM's infotainment system and it's one of the better ones around. It's quick, smooth, responsive, and intuitive. The voice controls work well, and it can even understand most of New Brunswick's hard to spell (and pronounce) place names. With many systems not being able to comprehend even "Oromocto", let alone my regional inflection of "Fredicton" or places like "Kouchibouguac National Park", a good voice recognition system is wonderful for changing destinations on the move. The system also supports both Apple CarPlay and Android Auto.

With a dog crate, suitcases, and loads of stocking stuffers to put inside, the Terrain Denali starts to feel tight. Making full use of the 893 L of cargo space behind the second row means you'll be packing upwards, blocking the rear glass, and making me wish that GM's rear-view mirror camera was available here. It also gives up 226 L to Honda's more space-efficient CR-V. Though if you need to fit that tree inside, the front passenger seat folds flat, along with the second row, giving you eight feet of length for sap and squirrels.

Rear-seat passengers will find plenty of legroom, but very tall people will probably find that their head ends up in the opening for the panoramic glass roof. The rear seats can recline slightly, which changes the angle just enough that almost anyone should be able to sit comfortably back there.

On the highway, the Terrain rides well by crossover standards. Bumps are absorbed with little or no drama, transmitting little impact noise through the cabin. The biggest sound is more of a boink sound from the 19-inch tires making contact with bumps. As the weather got colder and the tire pressures dropped slightly, the pitch of that boink dropped too, leading to games of "guess how cold it is now" based on driving over bridge expansion joints. Anything to relieve road trip tedium, right? When wind and road noise are well controlled, as they are here, it's interesting what other sounds fill the gap.

If you're hoping for motoring excitement, then the Terrain isn't the right place to look. While it doesn't roll excessively in corners, the somewhat numb steering and the response from the suspension will give you little satisfaction when the road twists and turns. But it's stable and solid on the highway, requiring little in the way of course corrections even when the wind picked up to speeds that had Amherst's roadside windmills turned off to stop from overspeeding. 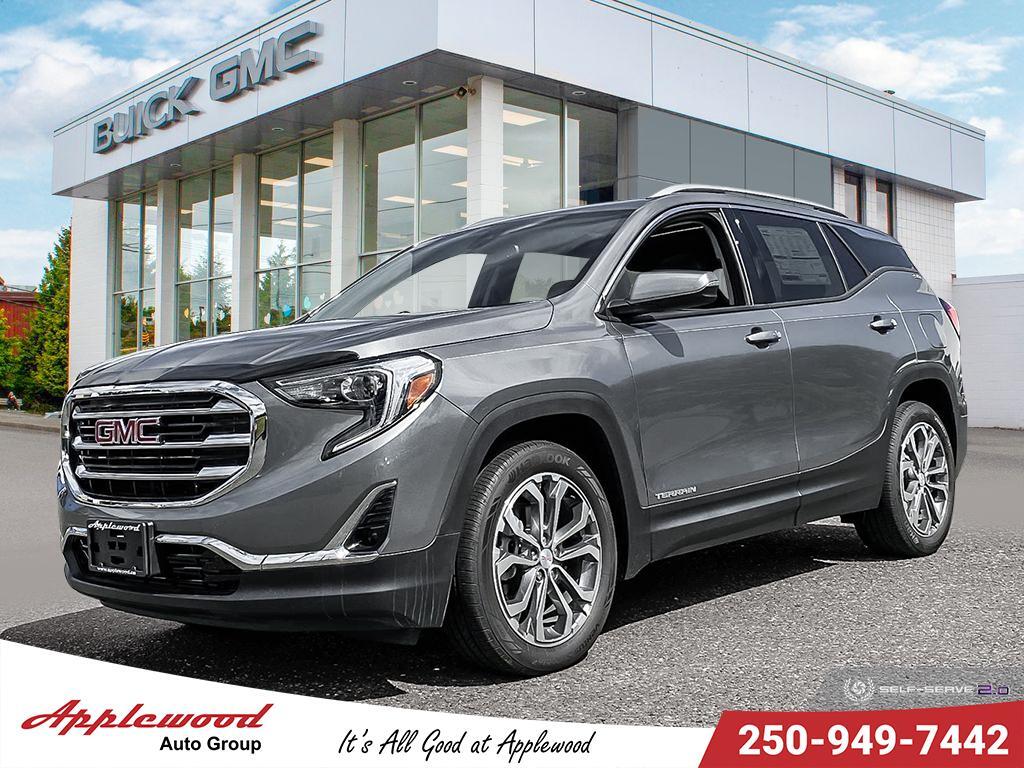 The engine, though, is a more lively companion than the steering. The 2.0L turbo four asks for premium fuel, but in return offers 252 hp and 260 lb-ft, with that torque delivered over a wide chunk of the RPM range. It pulls aggressively off the line, which on winter tires leads to either unseemly wheelspin or to pulling away from a stop extremely slowly to avoid it. On the road, though, the nine-speed automatic is quick to drop gears and let the engine rev. Fuel economy on the highway was close to the NRCan-rated 9.0 L/100 km, which is impressive considering the hefty load, miserable weather, and winter tires. Buyers looking for the best fuel economy from this crossover will likely want to stick with the SLE model. That one can be had with the 1.6L diesel that's rated for 6.1 L/100 km on the highway.

Visiting rural friends means ice-sheet driveways. And a quick stop on an icy hill for one friend's car-chasing Lab mix put the all-wheel drive system to the test. The new surround-vision camera let me see that Oscar had moved out of the way while the dashboard let me know that the low traction meant I should engage AWD, in case the spinning front tires hadn't already alerted me. With AWD on, the hill was a breeze. The system can be left on all winter long according to GMC engineers at the vehicle launch. The system will engage as needed, though for maximum fuel economy, it is still best to switch on and off as required.

After a week and more than 1,000 km worth of road trip, the Terrain Denali is more than enough to test its mettle as a family truckster. It's comfortable, quiet, and unobtrusive. And while that sounds like faint praise, when it comes to a family vehicle it's not. When you're spending so many hours in a loaded vehicle, even tiny problems can quickly escalate. If you're not carving canyons, unobtrusive is the goal. The Denali's extra interior luxury features over lesser Terrains add to that comfort, and many of them, like the surround camera and radar cruise control, make life behind the wheel easier. and more enjoyable. The Denali's chrome grille and LED lights add to the already handsome shape, making this one ruggedly handsome too. A non-nutritive cereal varnish designer like Clark Griswold never had it so good.

About Evan Williams
Evan has been covering cars for close to five years, but has been reading about them since he was 2. He's a certified engineering technologist and a member of AJAC. If it moves and has an engine, Evan's probably interested in it.
Follow me
You may also like
Latest Articles