It was hurt badly by the emissions scandals, but diesel has yet to die. It still crops up in a few vehicles, including as an option in the 2019 Chevrolet Equinox, as well as in its mechanical sibling, the GMC Terrain.

It’s a long-term proposal if you’re looking at it with one eye on your wallet, because the fuel efficiency of diesel is offset by such factors as extra maintenance and, in some cases (especially at certain times of the year), the higher price of diesel versus gasoline. You’ll have to do the math before you sign on the dotted line.

If you’re most familiar with diesels being honkin’ strong monsters, you may be a bit disappointed with this one. It gets you where you’re going, but the Equinox lacks grunt, with a bit of a dead spot on moderate acceleration. The payoff is the efficiency: a combined city/highway rating of 7.4 L/100 km, versus 8.9 for the smaller gas engine, and 9.7 L/100 km for the larger one.

The downside is that you will have to add diesel exhaust fluid, or DEF, which is automatically squirted into the exhaust system (not the engine) in order to help meet emissions standards. You get plenty of warning when the reservoir is getting low, and a fill is estimated to last about 8,000 to 9,000 kilometres, which means you’ll likely get it topped up during your oil changes and won’t have to worry about doing it yourself – although it fills right beside the fuel filler and is easy to do if the task falls to you.

As do many engines these days, the diesel includes an auto-stop function, which shuts it down at idle, such as when you’re sitting at a light. Everything else continues to operate, of course, including your lights and climate system, and it only shuts off when conditions are right, including engine and ambient temperature. What I don’t like is that while most manufacturers give you the option of temporarily disabling the auto-stop, the Equinox does not. I prefer having at least that much control over what my vehicle is doing.

The engine is fairly quiet for a diesel, with a bit of a rumble but nothing too noisy. And if I have to put up with the auto-stop, I will say that it’s not too jarring when this little powerplant wakes from its red-light snooze. You feel it starting up, but it’s not what you’d normally expect from a diesel.

You can get an Equinox in base LS trim starting at $29,100 (for the 1.5L in FWD), but of course it rises from there. The diesel comes both in LT trim, in front-wheel, starting at $35,500; while my tester, the Premier Diesel (in AWD only) begins at $38,400. Diesels can add thousands when they’re optioned in pickup trucks, but the Premier AWD diesel is a $500 premium over the Premier with the 2.0L gas engine, the only other engine in this top-level trim. 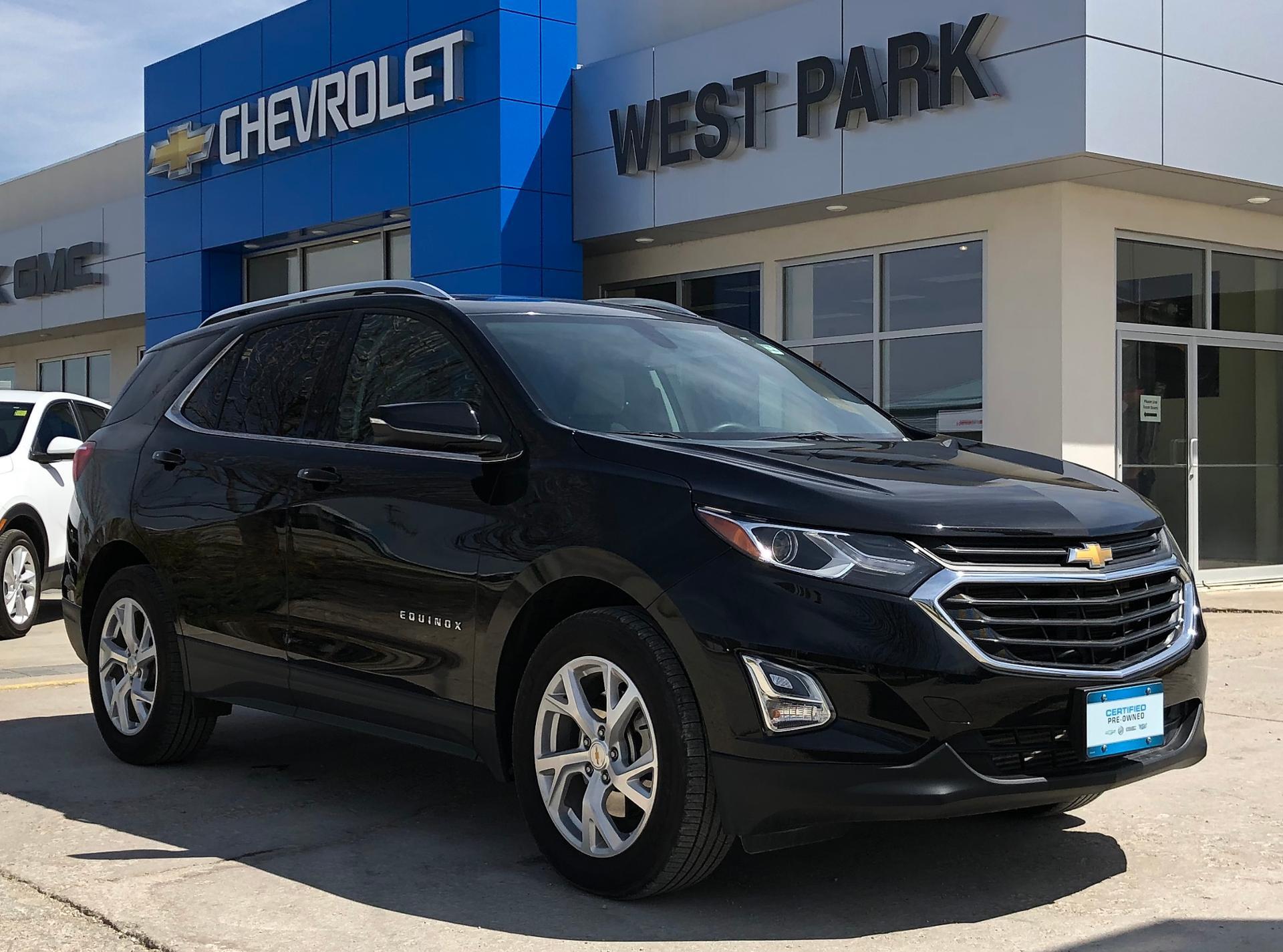 Of course there are options available, and mine was goosed with a “True North Edition” package that added a long list of items, including navigation, adaptive cruise control, lane-keep assist, heated rear seats and steering wheel, roof racks, and a sunroof for $4,250. The standard rims are 18-inch, but mine had a package that swapped them out for two sets of 19-inch wheels, one clad in all-seasons and the other in Bridgestone Blizzak winter tires, which added $2,790. But there were some colourful charges as well: my tester’s handsome “Pacific Blue” paint, at $495, and rather head-scratchingly, black Chevy bowtie emblems at $235. All in all, my tester came to a fairly hefty $46,170 before freight and taxes.

For that, though, I got a vehicle that’s well-sized, roomy, comfortable, easy to operate, and – the engine’s tepid acceleration aside – decent to drive. The handling is commuter-vehicle predictable, with light but responsive steering, and a smooth ride that isn’t easily unsettled by bumps and rough spots. This one’s more about creature comforts than carving along twisty canyon roads, but that’s fine for its intended audience.

The all-wheel drive system is selectable, and the default is to power the front wheels only, in the name of fuel economy. When all-wheel is desirable, you press a button to engage it; it then distributes torque to the rear wheels as necessary, depending on conditions.

I like the Equinox’s cabin: it’s simple but it’s handsome, and on my Premier model there are leather-covered chairs that are both heated and ventilated up front (although both controls show up as orange dashes when they’re activated; blue for cool and red for warm are considered the norm and should be here), along with contrasting stitching on the dash panels. There are a few hard-plastic bits, but they’re forgivable. There’s a fair bit of small-item storage up front, and the rear cargo floor lifts up to reveal a cubby under it. The rear seats fold flat to provide more space if you’re hauling longer items, too.

As mentioned, I like the simplicity. There’s a real lever-style shifter (its Terrain sibling uses pushbuttons, which I don’t like), and there are buttons and dials for the automatic dual-zone climate control system. The touchscreen infotainment system is intuitive, with a dial for the stereo volume and a hard “home” button to get you back to the main screen. Apple CarPlay and Android Auto are part of the deal, and you also get a 4G LTE Wi-Fi hotspot that’s equally easy to connect. However, it’s only for a short trial period, and you’ll have to buy a subscription if you want to continue using it.

The sport-ute market is a very crowded one and buyers have plenty of options, but the Equinox is definitely worth a test drive. I’d head straight for the 2.0L gas engine, both for performance and for price, but if you’re the type who hangs onto a vehicle for a long time, the diesel’s fuel-sipping ways just might pay for itself and then some. Just be sure to do the math before you take the plunge.

About Jil McIntosh
Jil McIntosh writes about new cars, antique and classic cars, and the automotive industry. A member of the Automobile Journalists Association of Canada (AJAC), she has won several awards for her writing, including Journalist of the Year in 2016. In addition to testing new vehicles, she owns two from the 1940s.
Follow me
You may also like
8.1