In the world of big-dollar posh-utes, things are fiercely competitive. Shoppers are savvier than ever, and they want everything, and they have numerous great options to get it.

What a time to be alive.

For these reasons and others, the new-for-2019 BMW X5 is oozing with next-level technology, much of which is executed to give shoppers a simultaneous taste of where the brand is now – and where it’s headed.

After all, impressing the shopper is just the start nowadays. We’re seeing more and more machines like this that intend to blow their socks off a little. Wow them. Intrigue them. Fascinate them. And maybe, even give them a taste of the future.

My tester, in xDrive40i guise, clocked in north of $71,000 for starters. An optional equipment list totalling about $20,000 pushed the final price well towards six-figure territory. If that’s out of your budget, read on while remembering that features and systems debuted in such machines often eventually wind up in a technology pool from which future (and more attainable) models will draw.

We can’t cover all of the high-tech goodies on offer in the space we have here, but I’ll explain about a few of the most compelling.

First? The new voice-command system, which is so good, you’ll actually use it.

Forget that nonsense! You needn’t speak to the X5 via a rigidly pre-defined sentence structure for it to get things right. Just mutter your desire while hitting a few keywords, and the system figures out what you want, and gives it to you fast.

Or, use your hands. Just twirl a finger in the air to raise the volume of the stereo, or thumb right to skip radio stations. You can control many infotainment functions (or even the back-up camera system angle) with simple hand gestures – no distraction, no searching for the right button or dial, and no need to look away from the road.

One day, this might be how we all control our vehicles.

The X5 can also be parked via remote control, and can remember your exact parking manoeuvre, repeating it in reverse to autonomously extract itself from a parking space later, sans driver input.

And the entire instrument cluster is a display screen. It’s high in resolution, rocks liquid-smooth animations, and is as rich and vivid and responsive as the main menu in your favourite Playstation game. This marks the demise of the signature orange BMW gauges that many have come to love over the years, but tech aficionados won’t miss those for long.

There’s a big-screen display centred on top of the dash. The climate control temperature indicators are screens too, and there’s a screen projected onto the windshield via the big and bright HUD which even displays full-colour satellite radio station icons for good measure.

It all feeds into the futuristic feel the new X5 wants to give you, and comes bolstered by a new controller for the new iDrive system, extensive use of gloss-black plastics and touch-sensitive pads, and even the way the engine start button and volume knob have been downsized and positioned less prominently – thereby clearing more real estate for more screens and more interfaces and more buttons.

It’s all great kit to wow your pals, but also nods to the way vehicle interiors may all look, one day. And of all previous X5’s I’ve driven, this one feels like the biggest leap ahead in terms of the human–machine interface, though you’re best to plan several hours of practice before using any of the above like second nature.

You even get a taste of the way vehicles of the future may one day keep us warm, when they don’t have engines. The X5’s seats and steering wheel are heated, but so are the armrests on the centre console lid, and each front door. This is a lavish luxury touch, but this form of radiant “panel heating” has been studied for use to heat the cabins of future electric vehicles that don’t have heat-generating engines.

The latest X5 is also one of the best tastes of the future of autonomous driving that I’ve ever seen. Fully deployed, the systems let X5 steer and brake on your behalf, alert you of possible collision hazards, and even autonomously prevent certain types of accidents – including those involving cyclists and pedestrians.

This isn’t the first or only machine to offer a boatload of advanced safety tech. But the wow factor comes from the way these features are presented: tap a single button, and the on-screen menu populates a list of all safety features, and their sub-settings. With a tap, you can select which systems you want engaged, and whether you want warnings, or warnings followed by intervention – for instance, having the steering wheel resist an input that would cause you to high-five the car in your blind-spot with your rear quarter panel.

Just a few taps sets things up to taste, and you’re the boss of the X5’s safety systems. This stuff can enhance our safety at the wheel now, but also, nods to a time when we’ll be able to switch fully between autonomous and manual driving.

For much of my (extremely) wintery test drive, I switched these systems off. 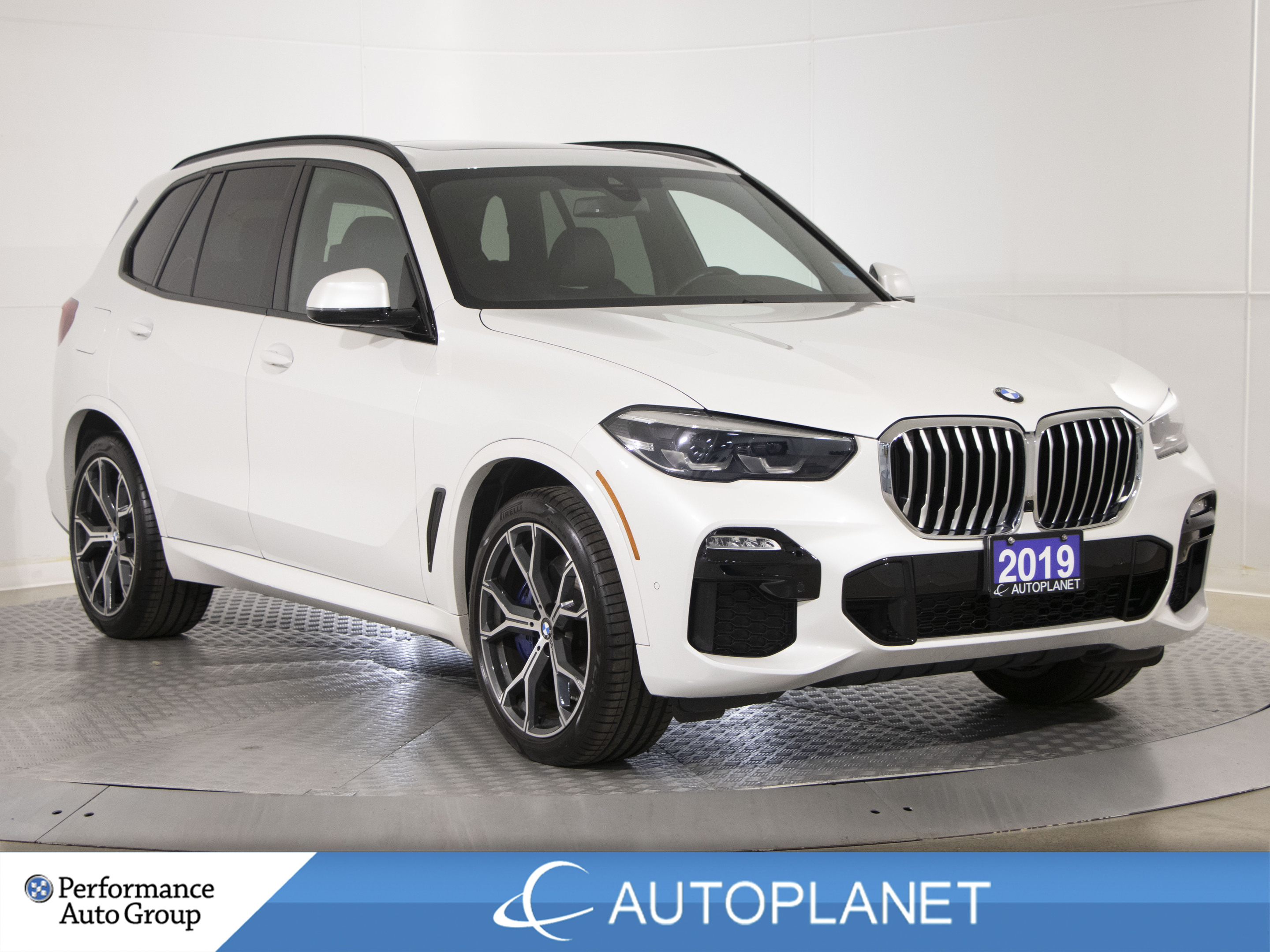 Further, when the road markings are hard to see (on snowy, salty roads), some systems will toggle on and off, every few seconds, based on the camera’s view of road markings. This is communicated to the driver, each time, via beeps and lights and even a change to the steering feel. It’s distracting, often annoying, and can take away from a relaxing drive. Thankfully, systems that get fussy in the snow can be easily turned off.

And – get this – the X5’s headlight system has laser-fired high-beams. Laser. Fired. High-beams. It’s a crazy world we live in.

When certain conditions are met, the standard high-beams are enhanced by the laser brights, which see internal lasers blasted through a series of lenses and prisms, adding to the forward illumination. The result is illumination that roughly doubles the typical forward range of even the most high-end lighting systems on the road. In ideal conditions, expect an extra three to four seconds of lead time to respond to an issue up an unlit road.

What a time to be alive.

There’s no shortage of over-the top luxury features, either, of course. The gear shifter is made of glass (à la Volvo XC90), and features a floating “X” hologram inside. It looks like a fancy, miniaturized crystal scotch decanter. There are massaging seats. Via iDrive, you can summon various designer scents to be wafted through the climate control vents as easily as you would change the radio station.

It’s because of all of the above that we’re this deep into this story about a crossover, ahem, Sports Activity Vehicle, from the “Ultimate Driving Machine” brand, and we haven’t even talked about the driving.

It was a few days into my test drive, on a snow-covered road, sensors off, where I first felt this new-generation unit recall one of my favourite X5 attributes from test drives of earlier models: how it drives in the snow.

And beneath the lasers and displays and sensors and delightful waft of Water Peals No. 2, the X5’s soul shines through most brightly.

Under the hood? One of BMW’s finest: a 3.0-litre straight-six turbo. You get 335 horsepower, loads of silky torque for instant responsiveness, and the thing sounds great when pushed, and is just a class-act of a powerplant, however driven.

It’s the core of a driving character that, here, makes the X5 feel like some of the most well-sorted and responsive ten tons going.

It doesn’t weigh ten tons, of course. But it feels like it does, which makes it drive like a tank in the snow and that’s just what many a shopper wants. That, until you ask it to steer or accelerate or brake, or throttle around a corner, when things get nicely playful. If you’re driving with a little intent, the X5 feels like a tall, heavy sports sedan that’s big and frisky.

And as sensible or sporty a drive as you’d like in bad weather, you’re the boss. Fine-tune things even further by selecting one of several drive modes, including Sport, which kicks the traction control down a peg, and sends more power to the rear axle for more dramatic reactions to throttle steering, if that’s your game.

I mostly used Comfort mode, though – thanks to snow so heavy and visibility so poor it closed a nearby highway on our filming day. In Comfort, steps are taken to relax you. Nothing happens too suddenly. The AWD and stability control systems team up and go high-alert to wipe out skids and slides before most drivers notice them. Special throttle and steering calibrations make it easier to dial in the smooth inputs that are so vital to safety in low traction driving.

And you relax, enjoy your massaging seat, and feel the remarkably effective adaptive suspension all but eliminate the unwanted body motions caused by uneven roads beneath. It’s quiet and peaceful now, the safety systems are all silent, and you smile at the element-conquering hardware doing its thing, while all winter-driving hell breaks loose outside.

From blizzards to backroads power-slides, you’re going to feel great during whatever sort of winter driving you want to get up to.

Neither the brakes nor the steering feel quite as precise at the tips of my fingers and toes as I’d expect from a BMW. The steering feels slower and lighter at my fingertips than I remember from past models, and it’s a bit less BMW-typical heavy and bolted on, and a bit more mainstream. The brakes perform well even when challenged, but the ultra-precise pedal feel from earlier X5 models has been ramped back a few notches too. Compared to earlier models, the confidence factor is all there, but the feel is a little less distinctive.

Further, those of us who lean away from tech-savviness may find the new interfaces and displays to be a bit much at times. Expect a steep learning curve before the new iDrive system feels natural to use, though existing iDrive users will have things sorted quickly. Still, if you want to switch your seat from hot to cold, you’ve got to navigate through an on-screen sub-menu. If that just made you shake your head, you’re probably not in for a good time.

In most areas where the driving manners are concerned, though, this X5 shows the benefits of doing something for a very long time, and doing it well. It’s gone more high-tech, more upscale, and buried its signature winter driving character deeper beneath the skin – but it’s still going to please the enthusiast easily, and especially, the driving enthusiast with a penchant for the very luxurious and ridiculously high-tech.

About Justin Pritchard
Justin Pritchard is an automotive journalist, consultant, TV presenter, and photographer based in Sudbury, Ontario.
Follow me
You may also like
8.3