I’ve been reviewing cars for a living for over 15 years, but the Jaguar I-Pace is only the second EV I’ve ever driven at length – thanks largely to very limited recharging infrastructure in my locale.

But can it do skids? O heavens, yes.

Just getting this test unit home required a 400-kilometre highway drive due north, into plummeting temperatures and extremely limited access to charging. But we made it.

Unlike all Jaguars before it, the I-Pace is fully electric – like a Leaf or a Bolt or a Tesla. It has no fuel tank. It’s not a hybrid. You couldn’t put gas in this thing if you wanted to.

A full battery gets you 377 kilometres of range, in perfect conditions. This is the “brochure” number. In real life, in Sudbury, Ontario, in the middle of February, the cold weather and my use of the I-Pace’s electric heater saw a full charge good for about 280 km at about -12 degrees. That drops down to about 240 km if you crank the heat, as I like to do. (I’m half Italian, which I’m told is why the very sight of snow makes me shiver.)

Ideally, you recharge your I-Pace on a Level 2 home charger. I had one of these installed recently to juice PHEV and EV test cars that’ll I’ll be reviewing in the coming years. Plug the Jag in at night, even with a virtually empty battery, and she’s full by morning. You can even tell the car what time you’re leaving the next day, and it’ll pre-heat the cabin using grid power. Every morning, I arrived to a full charge, a warm cabin, warm seats, and fully defrosted windows – all with no idling.

Depending on where you live, you’ll find public charging stations, too. Some are Level 2, like mine. Others are Level 3 DC “fast chargers” which can bring the battery from nearly empty to nearly full in about an hour, or add a few dozen kilometres of range in just a few minutes.

You could even plug into a standard household socket, but that would take days for a charge. There are Tesla Supercharger stations around too, but you can’t use those unless you drive a Tesla.

So, a Jaguar that you plug in to charge, and then you drive it around. You’ve got to mind how far you can go, and where you’ll plug in, and how long that will take. The idea being that you take little sips of electricity wherever possible, charge in full overnight or while you’re at the mall or gym, and then just… drive – like a regular car. But this one never needs an oil change, and you’ll never need to go to a gas station unless you’re after some Cheetos and a pack of Peter Jacksons.

It looks like mix between a crossover and a sports coupe. It’s a gorgeous collection of curves and angles and you get four doors with pop-out handles that retract fully into the doors, often, provided they don’t have to break too much ice. A motorized tailgate reveals a generous cargo hold, and further ahead, rear seats are grown-adult friendly (but watch your head getting in). A road trip for four adults and their things should see each in attendance with a good bit of personal space.

And it’s enjoyed from a gorgeous cabin, which might be one of the I-Pace’s most valuable assets. It’s bright and open and airy with plenty of glass all around – including virtually the entire roof. Upscale materials are assembled with expert attention to detail. There’s an authentically rich feel to just about everything, and the leather is so fragrant, you’ll smell it on your clothes the next day.

Add in the glossy finishes and touchscreens and futuristic controls, and it’s one-part electric Jaguar, one-part USS Enterprise. This machine is a comfortable, relaxing place to be. There’s great scenery all around, and the cabin fully pulls its weight towards the I-Pace’s price tag.

Right now, the EV isn’t feasible for everybody. Some can’t drive as far as a (cheaper) gas car. Refueling takes hours, not minutes. Winter can take a mighty chomp out of the total possible range. Plus, charging station availability outside of major centres can range from sporadic to non-existent. And it’s the colder parts of the country where you’re the least likely to find a plug – for now.

Of course, owners do their homework to see if and how EV ownership might work for them – and whether any changes may be required to lifestyle or travel habits. But aside from the range and recharging, actually driving and living with the I-Pace poses almost nothing new to get used to.

Press a button to start the I-Pace. Push another to engage Drive. From here, there are only two new things to know.

First, it decelerates more aggressively than a normal car when you fully release the throttle, preferring to slow down, rather than coast.

Second, the brakes feel a measure less precise and more vague than some drivers will like – though former hybrid drivers know what to expect. Your right foot will learn how to handle the slightly less consistent and more artificial brake feel in a few drives. 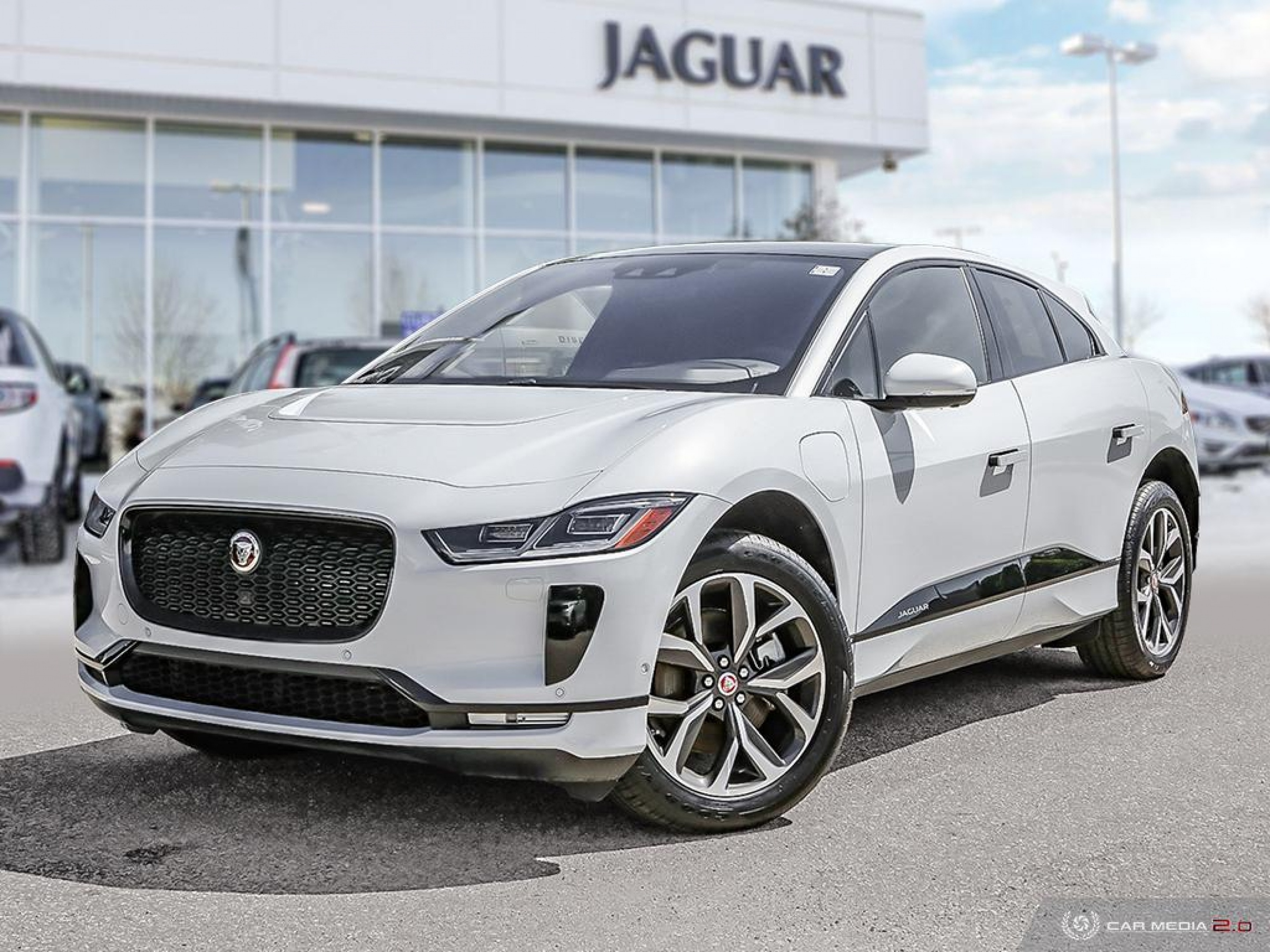 Beyond that, if you can drive a car, you’ll feel at home driving the I-Pace in about 45 seconds.

It’s a smooth highway cruiser. The air suspension all but eliminates excessive body motions to the benefit of a smooth ride over almost anything (but watch for potholes). Noise levels are kept down nicely, as expected. The steering at speed is light and lazy, but not so light that you need to constantly correct the position of the vehicle in its lane. The adaptive cruise control system works as smoothly and consistently as any of the best I’ve ever used, and the headlights are potent and powerful after dark. It’s a quiet, relaxing, supportive, and easygoing cruiser – and a rolling social lounge, when owners want to kick back and socialize on the open road.

The air suspension system even allows I-Pace to be lifted, for added clearance, at the touch of a button, or lowered down to “access height” to ease the boarding and exiting of passengers or cargo, if required.

A 90 kilowatt hour battery is structurally embedded into the floor, and feeds an electric motor on either end. One of these drives the front wheels, one drives the rear. It’s electric AWD.

Without the constraints of gearsets and diffs and clutches, this AWD setup responds more quickly and precisely to changing situations than a mechanical setup. Even accelerating hard on a surface where only a single wheel has traction, there’s no binding or slamming detectable as clutches and diffs and gearsets and shafts try to sort things out, since there are none of these.

From the driver’s seat, don’t expect any issues with traction if you’ve got good winter tires on. If you’re coming into an I-Pace from any other AWD luxury crossover with a highly capable AWD system (Quattro, xDrive, 4Matic, etc), you’ll find this to be as good, if not better.

But can it do skids? O heavens, yes.

The big flat battery in the floor makes the I-Pace very stable in the snow, but if you engage Dynamic mode and knock the traction control back, it’s also happy to send a few more volts to that rear motor when the driver fancies some silent slip-and-slide action on their favourite winding backroad.

Also, if there’s anyone who still lives in Narnia and thinks EV’s are gutless pod cars, then the I-Pace begs to differ.

Output of 394 horsepower and 512 lb-ft of torque would make for some serious speed in a gas-powered crossover: but with no transmission, no power curve, no churning fluids, and no complicated assembly of reciprocating parts, the only thing between the power and the road, are the I-Pace’s wheels.

With electric direct drive, power applied to the wheels can go from zero to 100 percent as quickly as you can change the current flow to an electric motor – immediately.

Expect 0–100 km/h in about 4.5 seconds, in virtual silence. Gearshifts? No. Interruptions? Nada. A swelling up of output as the optimal rev-range nears? No such thing. Simply, the fastest acceleration I-Pace can provide arrives, fully, the millisecond your foot hits the carpet.

Nothing with a gas engine I’ve ever driven responds this immediately and ferociously to throttle inputs. At full rip, I-Pace squeezes occupants heartily into their seatbacks, but all you hear is the sound of the air passing over the body, the tires pulling over the road, and a tastefully restrained artificial howl piped in over the speakers to enhance the experience. Even the very best gasoline luxury performance powertrains have nothing on this for massive torque, millisecond response, and virtually silent operation.

And even in challenging winter conditions, my Sottozero-clad tester performed as well as you’d expect in terms of braking, accelerating, and just feeling, comfortable in the snow. Translation? There’s no reason to leave it parked, even when the roads are greasier than the bottom of a box of fries.

In the cold, it takes a minute longer to warm up than a regular car – but the heater was sufficient until at least 20 below on my watch. The heated seats, heated steering wheel, and rear defroster aren’t the most powerful I’ve ever encountered, but they work fine.

Wintertime or otherwise, it just drives the way a crossover should.

Gripes were mostly minor. I wish the central climate controls were a little less flashy and a little more straightforward in use, and though the I-Pace is capable of photon-torpedo-like acceleration, the feel at the controls lacks the pure precision required to connect fully with the diehard driving enthusiast. It’s fast, but more comfy than sporty at the tips of your fingers and toes.

In summation: where the powertrain is concerned, the I-Pace is a smoother, quieter, and far more responsive thing to drive than almost anything that’s passed through your writer’s custody. My specific locale limited overall range somewhat because of the near non-existent infrastructure and some nasty-cold weather, but the driving experience itself is just what you’d expect from a high-end manufacturer, and so is the interior.

In my specific circumstances and locale, I-Pace ownership remains a few quick-charge stations away from being extremely feasible. This memorable machine also got me excited to see where the technology will go in the coming years.

So, a brave and remarkable new Jaguar, and also, a swanky hot-rod electric crossover that’s easy to live with so long as you’ve got the charging stuff sorted out against your specific lifestyle. It’s exciting times, and we’ll be seeing more about where this technology is going as more automakers like Jaguar join the game.

About Justin Pritchard
Justin Pritchard is an automotive journalist, consultant, TV presenter, and photographer based in Sudbury, Ontario.
Follow me
You may also like
8.5