Sedan buyers, or SUV rejectors – whichever name you want to give them, Cadillac says they’re still out there.

If they also happen to be Germany rejectors, those people will likely be pleased with what they see in the 2020 Cadillac CT5, which is making its public debut this week at the New York International Auto Show.

Now that Cadillac has filled out its SUV lineup – which the brand says is complete with the flagship Escalade being joined by the three-row XT6, two-row XT5, and subcompact XT4 – making some smaller sedans available is the next order of business. The CT5 replaces, more or less, the discontinued CTS, and a smaller CT4 is on the way to replace the ATS and go toe-to-toe with the Mercedes-Benz A-Class and its contemporaries.

The CT5 lands in an already crowded luxury compact sedan segment amid the likes of the Mercedes-Benz C-Class, BMW 3 Series, Audi A4, Alfa Romeo Giulia, Volvo S60, and Jaguar XE. In spite of its vast array of competition, it makes a solid case for itself on the surface – although how competitive it can be on price is a question that remains unanswered.

There are no electrified powertrains available at launch, but here’s a clear sign that they’re coming: the power badging on the CT5 isn’t based on engine displacement but instead reflects a given configuration’s torque output. Since electric motors don’t have an equivalent measure to displacement in an internal combustion engine, this is a change that seems obvious – but not a lot of brands have made it so overtly.

A pair of gas-powered turbocharged engines will be offered at the outset. The base engine is a 2.0-litre twin-scroll turbocharged four-cylinder, rated at 237 hp and 258 lb-ft of torque fully available from 1,500 rpm. This engine will be badged as 350T for its 350 Nm of torque.

The upgrade engine, available on the upper-tier Premium Luxury and Sport grades, is a 3.0-litre twin-turbocharged V6 that makes an estimated 335 hp and 400 lb.-ft. that’s 90 percent available at 1,800 rpm. This one is known as the 550T – its actual torque output is 542 N⋅m (Newton metre), but that’s not a number that looks as pretty on a decklid, perhaps.

Both engines have available cylinder deactivation and come matched with a 10-speed automatic transmission.

There’s no V-Series model on this list yet, but when asked about it, Cadillac’s engineers would only say that the rear-wheel drive platform the CT5 is built on can accommodate a wide variety of powertrains. Reading between the lines, it’s a fair bet that there will be one eventually, though precisely when is anyone’s guess.

On that point regarding rear-wheel drive, that’s the standard configuration on the CT5 with all-wheel drive being an extra-cost option available on every model, including the entry-level Luxury grade – and exactly how much it will add to the MSRP hasn’t been announced yet.

Regardless of whether two or four wheels get power, a traction mode selector will allow on-the-fly adjustments for touring, sport, and snow and ice driving, as well as a new My Mode that accommodates an individual setup for preferred shift patterns, steering and brake feel, vehicle sound, and, when all-wheel drive is equipped, front-to-rear torque split.

At 2,947 mm, the CT5’s wheelbase is 36 mm longer than that of the CTS. The double-pivot MacPherson-type front suspension and five-link independent rear suspension are managed with ZF passive dampers. 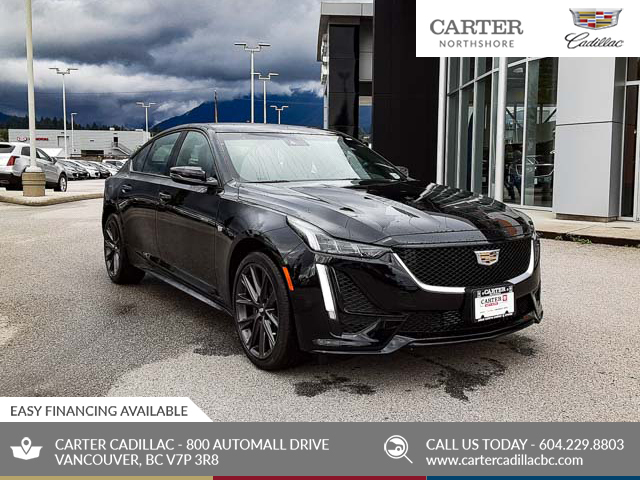 To find out how this all adds up to on-road performance, we’ll have to wait for the first drive. But on initial impression, the CT5 is one classy-looking car.

Four-corner LED lighting makes a strong statement in this interpretation of Cadillac’s signature vertical light band, and widened wheel arches lend a balanced and solid look to the exterior. The C-pillar leans back into fastback styling with elongated rear side windows that, rather than going into a full floating roof treatment, trail off into a tasteful tail.

The interiors are impressive, with open-pore wood inserts being available in Premium Luxury, and certain Sport colour schemes incorporating leather with gradated perforation on the seatbacks and carbon fibre enhanced with the inclusion of a single red thread. This is an option on the XT4 as well, the designers say, but it’s in a much subtler cinnamon-like colour that doesn’t stand out as much. In this red, it truly pops.

Although nothing has been said about pricing at this stage, some details around packaging have been announced.

The CT5 will follow the same Y-patterned model strategy as other Cadillac products, with a Luxury model serving as the entry level and Premium Luxury and Sport trims forming the two top tiers, each with unique styling cues and features.

Once you move up a tier, both the Premium Luxury and Sport models have standard lane-change alert with side blind-zone alert, rear cross-traffic alert, rear park assist, and auto-dimming mirrors.

The Premium Luxury model has chrome exterior accents and red taillights. On the Sport model, a gloss black grille, rocker extensions, and accents; a body-colour spoiler; and clear-lens taillights differentiate the exterior along with standard 19-inch aluminum wheels with run-flat tires and Brembo front brakes.

A Premium package can be added to Premium Luxury and Sport models, which integrates: an exclusive brown and black interior design with Opus leather seats, contrasting seat piping, and chevron accents; front seats that are heated, ventilated, massaging, and adjustable 18 ways; leather trim on the armrests and centre console; unique carbon-fiber trim; and a thicker-rimmed steering wheel with magnesium paddle shifters and alloy pedals.

Other available features include a hands-free trunk release, something Cadillac is calling a “phone shrine” which creates a space in the centre stack for a phone to rest, wireless charging, and GM’s Teen Driver feature.

Cadillac’s hands-free Super Cruise highway driving system isn’t available at launch, but it will be an option starting in the calendar year 2020.

The 2020 Cadillac CT5 will begin arriving this fall with pricing – which is by far the biggest unanswered question surrounding its competitiveness – to be announced closer to launch.

About Stephanie Wallcraft
Stephanie Wallcraft is the child of an auto worker and honed her passion for cars in the grandstands of the Molson Indy Toronto. Today she continues the family tradition by writing about cars and motorsport for publications across Canada.
Follow me
You may also like
AdChoices
Latest Articles
﻿