Although the market for full-size, truck-based SUVs has slowed considerably over the past decade – knocked out by the rising popularity of pickups and the startling proliferation of crossovers at every step of the pricing ladder – it is unquestionably owned by General Motors. Of GM’s boxy big boys, it is the GMC Yukon that holds the sales edge over its Chevrolet Tahoe counterpart here in Canada, in an unusual mirror image of how things typically play out down south.

After a week spent with the 2019 GMC Yukon SLT, however, it’s easier to understand what makes the General’s trucks-and-trucklets-only brand such a people pleaser. As long as you can pay the price of admission, that is.

You see, as the proportions of these colossal body-on-frame haulers puff up, so does the window sticker. You’re not getting into a base GMC Yukon for less than $60K, and the model I tested – an SLT trim outfitted with the Graphite Performance Package – pushes that figure past the $80,000 mark. Startlingly, this is still not the cap on Yukon pricing, which can brush against six figures for a Denali XL model.

That’s huge money for a huge ride, especially one that doesn’t have the luxury badge cachet of Mercedes-Benz or BMW, each of which offer their own three-row sport-utility takes.

Problematic pricing aside, however, there’s a lot to like about the GMC Yukon SLT. For one, interior room is cavernous. Even in the standard-wheelbase model you could get lost trying to find your way from the front seat to the rear row; and while adults might not have the best time out back, it’s more than survivable for shorter trips. Fold those accommodations flat and you’re looking at enough room to haul home more than two sets of race rubber, as I had occasion to in preparation for the upcoming spring season.

Then there’s the quality of the cabin itself. Despite not offering the same upscale materials as the top-tier Denali – a fact most obvious when examining the plainer presentation of the vehicle’s dashboard – the seat leather feels soft and plush, and wood trim accents break up the GMC’s monotone black and grey treatment. The configurable gauge cluster is useful and intuitive, and the IntelliLink infotainment system is likewise easy to use. 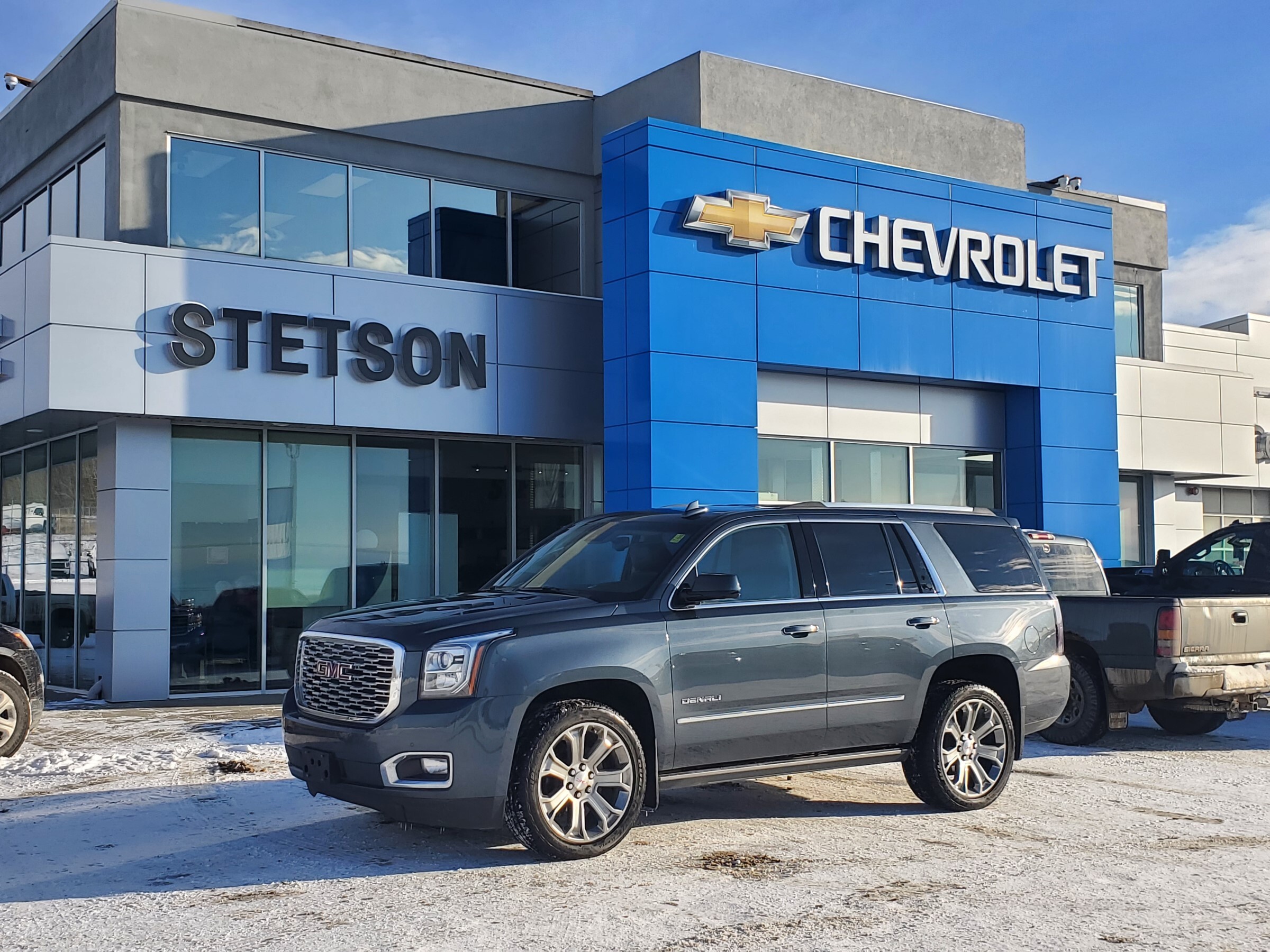 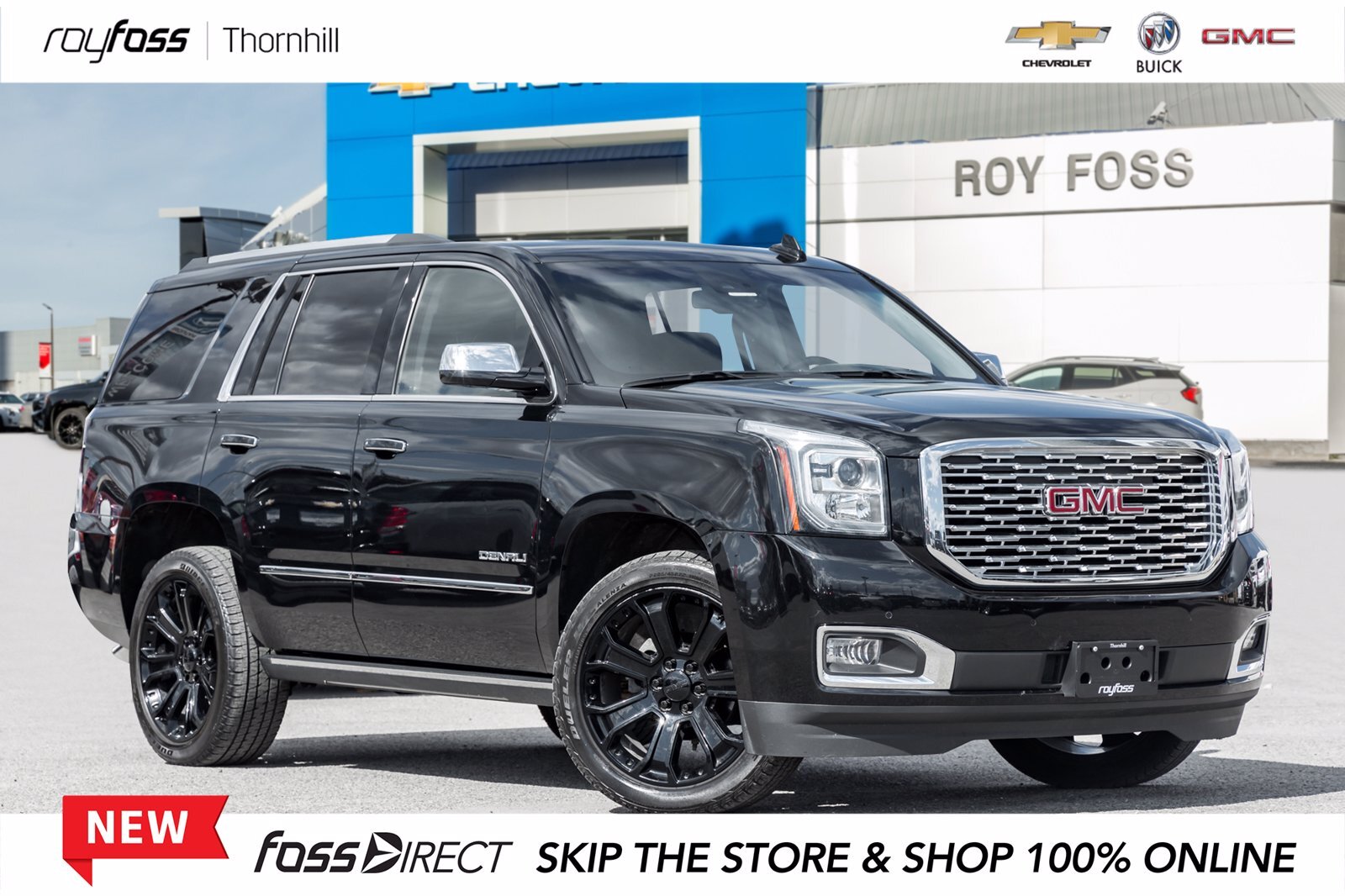 Then there’s the drivetrain. While not necessarily elegant, and lacking the high tech “wow” factor of a forced-induction setup, the pushrod V8 outfitted to the GMC Yukon SLT offers an experience few other SUVs can match with the pedal down. The Graphite Performance Package shoehorns in the brand’s mightiest mill, a 6.2-litre that produces 420 horsepower and 460 lb-ft of torque. Throttle response is instant in the way only an all-motor setup can offer, and the 10-speed automatic gearbox attached to it does its best to alleviate stress at the fuel pump.

That being said, you’ll still have to swallow 16.4 L/100 km around town in four-wheel-drive models like the one I drove, and that’s if you drive like the accelerator is covered in tacks. The trade-off is a sporty off-the-line surge and effortless towing of up to 3,700 kilograms.

There are two other bonuses that come with the Graphite Performance Package. The first is GM’s excellent Magnetic Ride Control suspension system, an adaptive setup so precise that it’s licensed by the likes of Ferrari for use in its fleet of supercars. In the Yukon, its primary benefit is controlling the motion of the vehicle’s solid rear axle – not as much of a liability in a modern context as one might expect – and deadening the thumps and whumps that crash forth from the SUV’s enormous 22-inch rims.

Those wheels are painted gloss black and are a perfect match for the RCMP-spec style that serves as the other extra of going Graphite. Dark trim, a blacked-out grille, and a black paint job had me feeling as though I was about to bust open a country-wide espionage case each and every time I rolled up to my parking spot. Or, at the very least, provide a timely assist to Scully and Mulder.

Whether you’re looking to track down a government conspiracy or simply want to tow your boat in style, the 2019 GMC Yukon SLT has you covered. Its chunky, muscular good looks, excellent power, and surprising comfort out on the road are huge points in its favour, especially when paired with added menace of the Graphite Performance Package.

It’s far from being your only choice at the $80,000 mark, however, and it’s here that things get a little muddier. That same cash gets you into a BMW X5, Mercedes-Benz GLE-Class, or Infiniti QX80 – vehicles that together cover much of the same ground as the Yukon with the added attraction of genuine luxury recognition at the valet station.

Of course, the price you see advertised is rarely the actual amount paid once you’ve walked out the door of a domestic dealer, and this presents the opportunity to score the GMC Yukon’s significant pluses without having to necessarily bleed as deep. Come for the performance and practicality, but stay for the deep discounts, and you’ll most likely be pleased with the balance of what you end up forking over in the end.

About Benjamin Hunting
Benjamin Hunting is a freelance writer who enjoys keeping the shiny side up during track days. He is also an avid musician and a friend to vinyl.
Follow me
You may also like
7.3