The big news for the 2019 Mazda CX-5 comes under the hood and inside the cabin: for the first time, Mazda’s middle CUV gets a turbocharged motor. Inside, meanwhile, the new Signature trim provides Nappa leather upholstery, a digital gauge cluster, real wood trim, and more.

I’m sorry if this sounds extreme, but the CX-5 is the best-looking vehicle in the mainstream mid-size CUV segment. Not only that, it makes a real push at taking the crown among luxury mid-size CUVs, too – if it weren’t for the Infiniti QX50 and Volvo XC60, it would be the winner on the catwalk. The proportions are spot-on (except for maybe – maybe – the over-wide fender gaps), the detailing fantastic and high-level, and the updated 19-inch gunmetal wheels are a great complement to the styling overall.

Even though my tester was finished in grey (“Machine Grey”, to be precise), it still looks sharp; I’d have a hard time skipping the Soul Red Crystal, though, even if it does cost and additional $150 over the cost of Machine Grey paint.

Being the Signature model, the interior has been given a comprehensive once-over. The Nappa leather and Abachi wood inserts are the details that immediately jump forward, along with the partially digitized gauge cluster. Look a little closer, however, and more pleasing bits emerge: all the interior lights – vanity mirror, cargo area, ceiling lamps, and overhead console – are of the LED variety here, which is nice.

There’s also premium stitching on the steering wheel, and a satin chrome look has been added to the seat switches. These are all high-class touches and do well to push the CX-5 to near-luxury levels, which, for Mazda at least, it needs to do because unlike so much of the competition, the Hiroshima-based company doesn’t have a luxury arm. The top trims of its models need to maybe nab a sale or two from the other guys’ luxury lineups.

2019 finally sees the CX-5 get that power hike we’ve been asking for, in the form of the 2.5L SkyActiv-T turbocharged engine offered in both the CX-9 and Mazda6 sedan. It’s rated at 250 hp (on 93 octane; that figure drops to 227 on 87) and 310 lb-ft of torque. Even the lower of the two hp ratings represents a 40 hp hike over non-turbo models, and a 124 lb-ft jump in torque. It’s fed to all four wheels through a six-speed automatic that still doesn’t allow for manual paddle-shifting, which is too bad: If the agile, quick-steering but non-turbo CX-5 called a little for paddles, the turbocharged model represents an outright holler for the tech.

The power jump can be a little deceiving, however. On tip-in, there is a little turbo lag and the CX-5 doesn’t quite explode off the line as much as I thought it would. Once the tach needle sweeps past the 2,000 rpm mark, however, the turbo-four finds its legs and you’re spirited down the road at quite a clip, riding a nice wave of torque that almost has the CX-5 feeling like it’s perched back on its haunches a little.

Activating Sport mode by flicking a switch left of the shift lever, however, changes things quite perceptibly: Throttle response is heightened and gears are held onto longer, to the point where I wouldn’t recommend highway cruising in Sport as the revs stay quite high.

It does make for a fun blast from stop, providing an immediate impression of what the new turbo power adds. Still, I couldn’t quite shake the feeling that even though the CX-5 is lighter than the CX-9, with the same engine under the hood, it didn’t feel that much quicker.

One thing I have a much harder time finding any fault with, however, is the steering and handling. The Signature version gets the same, ultra-focussed steering rack that other CX-5s do, and while the damper settings may be a little on the firm side for some, I think they fit the overall ethos of the CX-5 well.

Turn-in is immediate to the point where you need to focus a little more on freeway grinds lest a small amount of lock leads to a bit of lane-drifting, but it’s no deal-breaker. I had no problem with it since it’s so tossable otherwise, doing a fantastic job of disguising its high(ish)-riding CUV digs. 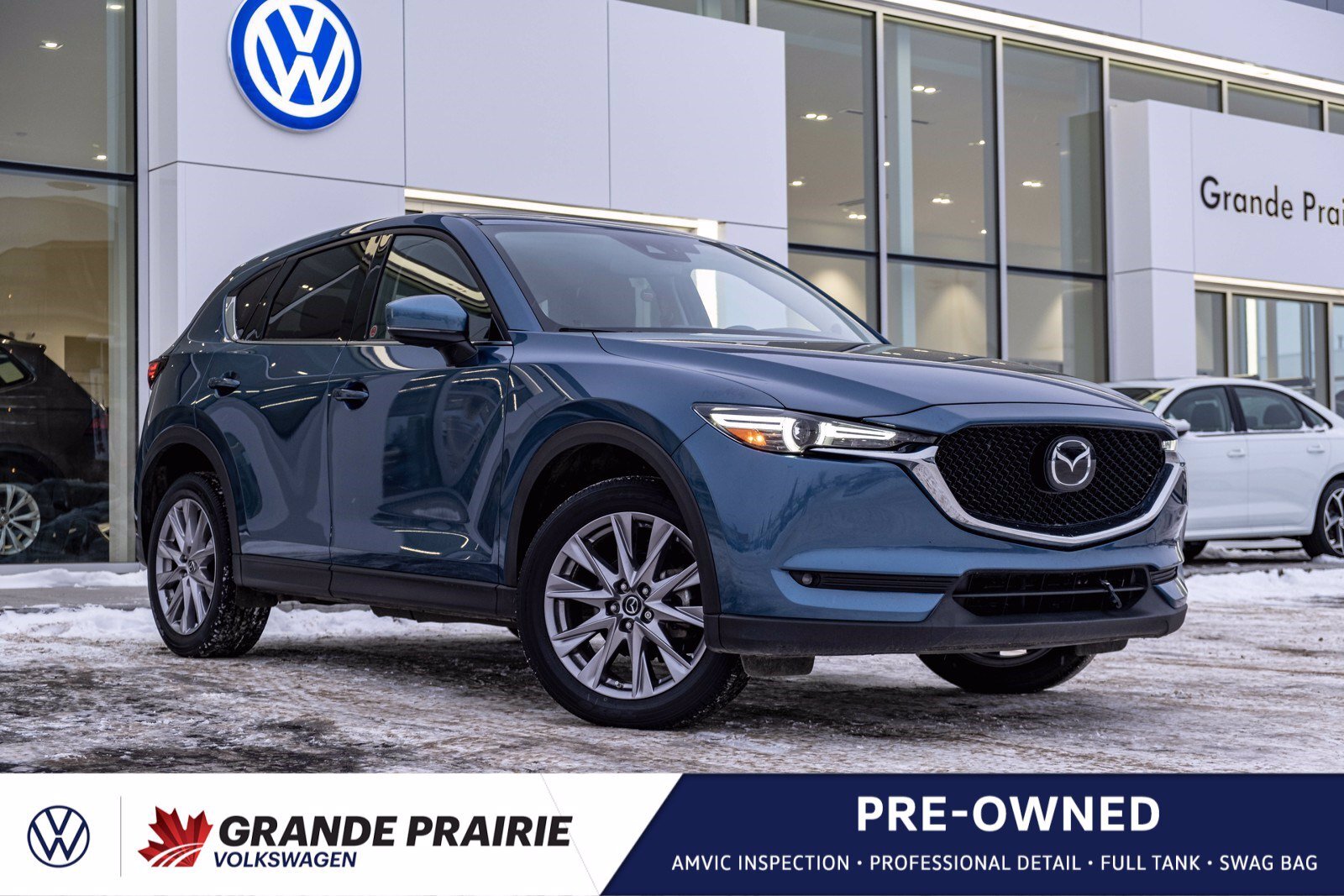 Also big for 2019 is the addition of Apple CarPlay and Android Auto as standard on all trims. It worked quickly and smoothly during my test; this surprised me as when I sampled a GT trim with the same tech, it was quite finicky, even crashing out to the Mazda’s native system at one point. That never happened here and while I had the occasional hiccup with Google Play Music – as I often do with CarPlay – I had no trouble staying in the CarPlay environment for the duration of my test. There’s no wireless charging or Wi-Fi hotspot though, two features that are becoming ever more present at this level.

For me, the CX-5’s practicality digs are honed by a single detail, and that’s the 40/20/40-split folding rear seat. Other manufacturers do this, but the CX-5’s main competition in the form of the Honda CR-V or Hyundai Santa Fe do not. What the split does is allow you to fit long items without having to lose either outboard seats – you could even have two child seats back there and still fit your skis or hockey sticks.

It doesn’t get all that innovative, however; you’ve got your standard centre-console storage bin that’s deep enough, but can be hard to access since a removable shelf covers about 55 percent of its opening. I popped that out, and stuck with the main bin.

Space-wise, the front seats are good – they’re ventilated here and on the Platinum and second-tier GT trims too – but your passenger will feel the pinch a little if you have a rear-facing child’s seat behind them – it’s why I’d never put one behind the driver. Rear storage, meanwhile, was expanded after the CX-5’s 2017 refresh, and while it lags behind the CR-V (indeed, pretty much everything does), a family of three or four should be able to take a weekend getaway; if camping’s involved, however, you may want to consider a roof rack and cargo box.

As the top trim, the Signature gets every safety bell and whistle you can imagine, and perhaps some you wouldn’t. Traction control, blind spot system, adaptive cruise, and rear cross-traffic alert are all here; while added bonuses like traffic sign recognition (whereby a stop sign will appear on your HUD if you’re approaching one) and Smart City brake support automatic braking help round out a comprehensive safety package. It loses marks, however, for the automatic high-beam control which seemed to only work part of the time; too often I found myself scrambling to the light dimmer as I approached oncoming traffic.

The fuel economy is surprising: Though more powerful and turbocharged, we saw 10.5 L/100 km in the combined cycle, which is slightly above what Mazda claims, but ultimately only about 1.5 L/100 km more than the non-turbo version. When you’re using premium fuel, that’s some nice food for thought.

If the turbo engine is a must-have for you, then you’ll like what the Signature brings, value-wise. It comes with the turbo as standard; add it to the GT trim, and the cost-of-entry gap between the two shrinks to a measly $1,500. Plus, with the Signature, you get all the interior niceties and those special wheels. For a car that looks this good, you want to make sure the detailing is spot-on and those wheels fit well.

So, if turbo power is what you’re after, then the Signature becomes a real nice feather in the CX-5’s cap. It seems almost backwards-thinking to even bother going with the GT if you want that power. However, if slightly better fuel economy is what you’re after, then non-turbo power would do the trick. I guess you could say it’s a shame that you can’t get that well-equipped and finished interior without having to go for the extra power as well, but I’m fairly certain that most people who are going to go the Signature route will be happy with all that it brings.

About Dan Heyman
Dan Heyman is a car guy through-and-through, ever since his first word was “Toyota”. Dan has worked as a full-time automotive journalist since 2010.
Follow me
You may also like
7.8