Reviews
By Jil McIntosh
Not your everyday minivan – but it could be.
THE GOOD
THE BAD
8.0
7
STYLING
8
SAFETY
9
PRACTICALITY
8
USABILITY/ERGONOMICS
9
FEATURES
8
POWERTRAIN
8
COMFORT
8
DRIVABILITY
9
FUEL ECONOMY
6
VALUE

Gas prices being what they are these days, it’s always a treat to come in “under budget” at the pumps. And that’s exactly what I did with the 2019 Chrysler Pacifica Hybrid: after a week, I was down just a quarter-tank of fuel. It’s a plug-in hybrid (PHEV), which gives you a stretch of completely fuel-free driving after it’s been plugged in. It then reverts to conventional hybrid operation once that runs out, so you’re not stuck if you can’t plug it in. However, its technology comes with a high price tag.

There’s only so much you can do with a box, but the Pacifica has some interesting body lines and curved-off corners. I like a bit of chrome, though, and my tester was equipped with an S Appearance Package, a new-for-2019 option on the hybrid. It took most of the shiny stuff – wheels, grille surround, and badges – and painted it black. At an extra $995 to make this minivan look ho-hum, I know where I’d be saving a few bucks.

The Pacifica gets an overall five-star rating from NHTSA, and a Top Safety Pick rating from the IIHS. All Pacifica trim levels (Touring Plus, Touring-L, and Limited) include eight airbags, tire pressure monitoring system, and the rear-view camera that’s mandatory on all new vehicles. However, you have to move up to the Touring-L to get blind-spot monitoring and rear parking assist. My top-line Limited added such higher-tech features as a 360-degree camera, adaptive cruise control, emergency front braking, lane-keep assist, automatic high-beam headlamps, and a self-parking feature. If you want these on the lower trim levels, you’ll have to shell out extra.

SUVs are popular, but when you’ve hauling a crowd, nothing does it like a minivan. The sliding doors are made for tight parking spaces, it’s easy to access the third row, and there’s lots of space for cargo.

I really like that the Pacifica has a smaller centre console. While you lose the small-item storage of a full console, you get a floor tray (decorated with four past minivan models) where you can park a purse or pack so it’s immediately accessible. So why not ten out of ten? It’s because that big battery is under the floor, so the second-row Stow ’n Go seats from the regular Pacifica – which you can fold away, or use their underfloor bins for storage when they’re up – aren’t included here.

The Pacifica’s controls are simple and easy to use. The climate control buttons are large enough to easily see at a glance, although the heated seat and steering wheel are accessed through the centre touchscreen. That screen contains Chrysler’s Uconnect system, which on my Limited tester stuffs in navigation and a 4G Wi-Fi hotspot. You can drop-and-drag certain icons to the taskbar at the bottom, to keep your frequently used ones handy.

Getting in and out is easy, with a fairly low sill, and with easy-slide second-row seats for access to the third row. Those second-row chairs are removable for extra cargo space (since, as mentioned, they can’t fold into the floor), but they’re heavy and it’s a chore to get them out. The third-row seats have two straps that you pull to fold them into the floor.

Sitting at the top of the trim pack, my Limited tester was crammed with goodies, including a Blu-ray DVD rear-seat entertainment system with two 10-inch screens and wireless headphones; easy-entry heated and ventilated front seats; power-folding and auto-dimming mirrors; auto-dimming interior mirror; and power liftgate. My tester was further optioned with a 20-speaker Harman/Kardon sound system for $995; all-weather floor mats and cargo liner for $995; and a three-pane panoramic sunroof for $1,695.

The Pacifica Hybrid combines a 3.6L V6 engine, mated to a continuously variable transmission with two electric motors, and a lithium-ion battery. Chrysler doesn’t break out the engine and electric capacity separately, but reports that the combination produces 260 horsepower and 236 lb-ft of torque. 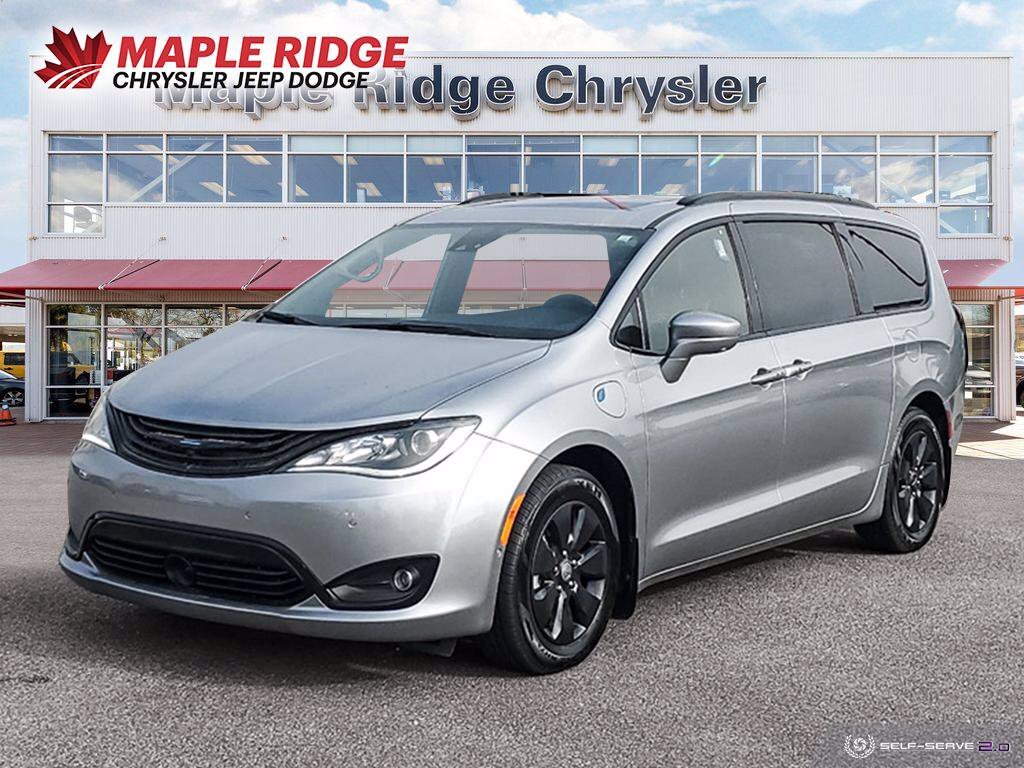 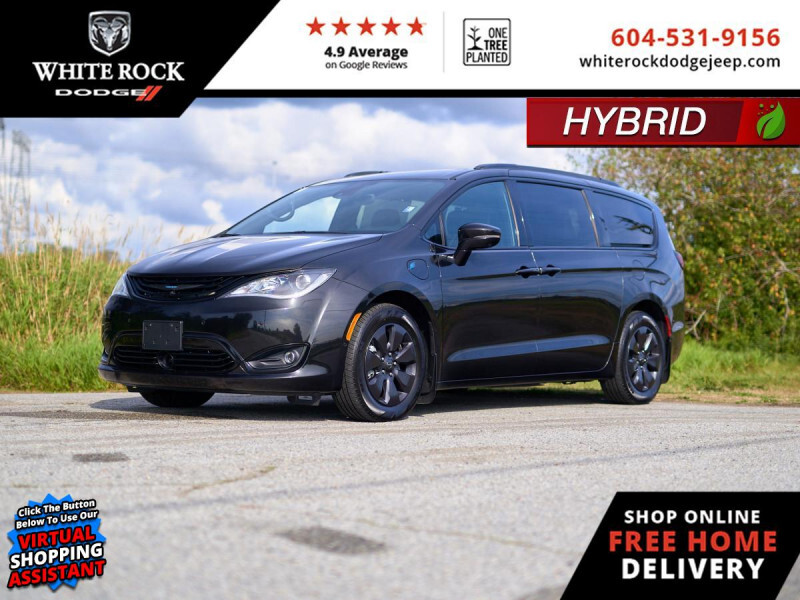 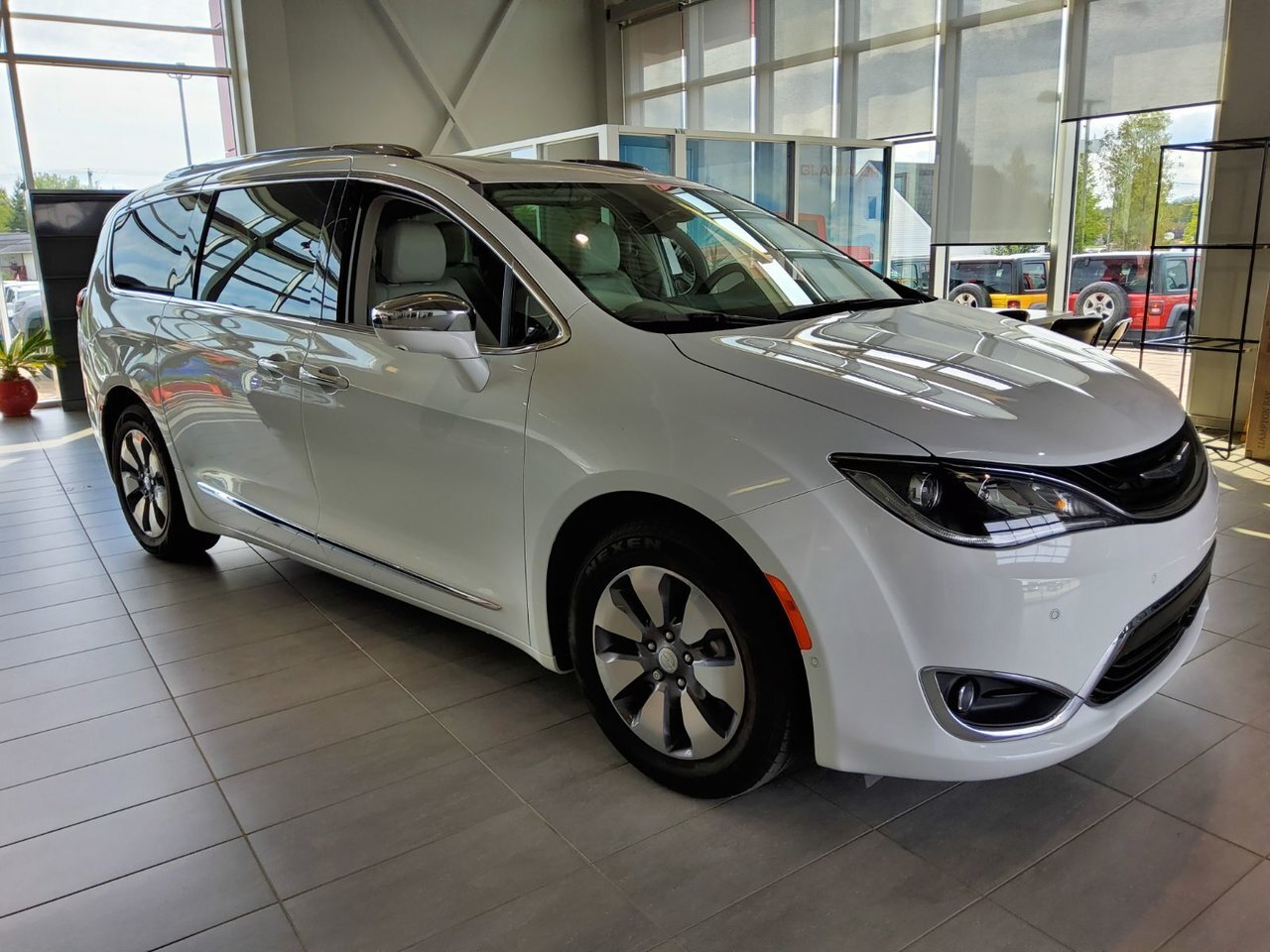 The big deal with this van is its plug-in capability. When it’s charged up – which you can do from an ordinary 110-volt outlet, or faster with a 240-volt charger – it has an all-electric range of approximately 51 kilometres. It runs on this first, and once it’s depleted, it automatically switches to hybrid operation, where it self-charges its battery using regenerative braking. Under ideal circumstances, you can build up enough power to go back to a short stint of electric-only. I drove one of these in the Appalachians a couple of years ago, and on some of the long downhill stretches, I was able to put up to four kilometres’ worth back in. The van then used that as soon as I got back on the throttle for extra fuel savings.

To get that full 51-kilometre readout, you’ll need to plug it back in again. It doesn’t take as long as with a fully electric car, and a half-hour at a public charging station got me 19 kilometres. Still, those 51 klicks are just an estimate. A heavy foot, highway speeds, and cold weather all cut that range down.

Although the regular Pacifica can be had with eight-passenger seating, the hybrid comes only with second-row captain’s chairs for a maximum of seven. I’ve driven one of these for nine hours straight, and while the Toyota Sienna’s and Honda Odyssey’s chairs are a bit more comfortable, these still feel good on your spine after a long haul. The second-row seats are also supportive, and they’re more heavily padded than a Stow ’n Go seat, which has to be thinner so it can fold down. The third-row chairs are flatter and harder, but they’re viable for shorter trips. Legroom is generous in the first and second row, and decent enough in the third.

Those 260 horses might not sound like much to haul around such a big vehicle, but electric motors are all about providing torque the instant you need it. Acceleration certainly isn’t breathtaking, but it’s livelier than you’d expect when you need to get moving in a hurry. It’s most satisfying to run on that stored charge of electricity alone, of course, but if you’re light-of-foot in hybrid mode, the Pacifica will run on battery as much as it can. As with other hybrids, it seamlessly switches between gasoline, electricity, or a combination of the two as required.

Putting the battery under the floor lowers the Pacifica’s centre of gravity, and along with a su

spension that’s tuned for the extra weight, it’s a pleasure to drive. The steering is light and it’s easy to manoeuvre it around, and it’s planted and confident on the highway.

In combined city/highway fuel consumption, the Pacifica Hybrid is rated at 8.0 L/100 km for gasoline alone, and 2.9 Le/100 km on electricity and gasoline with a full charge. Natural Resources Canada estimates $2,162 to fuel up a regular Pacifica for a year, but only $1,043 for fuelling and charging the hybrid (calculated at $1.02 per litre for gas, and 13 cents per kWh for electricity, over 20,000 kilometres). That’s a considerable saving, but of course you have to do the math against the hybrid’s higher price.

Some might wonder why you’d even bother for just 50 or so kilometres on electricity, but for many people, the daily commute and errands don’t come close to that. Plug it in each night, and you might be able to run almost exclusively on battery. But when you do want to go farther, you’re not bound by range restrictions that you get with an all-electric vehicle.

The Pacifica Hybrid’s Achilles’ heel is money. You get an enormous amount of technology and features for my tester’s $57,245 starting price (the base trim begins at $52,295). But it’s a huge chunk of money in a segment where young families are used to buying $19,999 Grand Caravans. Even fully loaded Honda Odysseys and Toyota Siennas aren’t as much as this van. However, the Pacifica Hybrid qualifies under the federal government’s new iZEV program, which takes $5,000 off the price in all provinces. If you’re in British Columbia or Quebec, the Pacifica Hybrid also qualifies for a $5,000 provincial rebate.

The path to sustainable transportation is chicken-and-egg. The technology’s expensive because it’s low-volume, and consequently, it doesn’t sell in the volumes needed to bring the price down. But if you’re looking at luxury-minded minivans, take a look at this one, and factor in the rebates. It’s pricey, yes, but it sure is nice.