Looking for classy design, all the luxury mod-cons, and a full complement of advanced safety gear? The 2019 Cadillac XT5 delivers all of that in a family-friendly compact package, but the high price tag for the Platinum trim will likely have you looking for a more traditional luxury badge.

The Cadillac XT5 walks the line well between the bulk of an SUV and the smoother lines of a traditional wagon. In a segment dominated by the extroverted looks of the Lexus RX, the XT5 provides a classy alternative that comes across as a more reserved take on what a luxury hauler should look like.

Cadillac has made sure to improve the standard safety gear available on higher trim levels for 2019. On the range-topping Platinum model, the XT5 includes the Driver Assist package (adaptive cruise control, automatic braking front and rear, automatic parking), plus lane-departure warning, lane-keeping assist, and a forward collision alert feature. It’s what you’d expect from a crossover at this price point.

I particularly like the Safety Alert Seat that also comes with the XT5. The system vibrates the edges of the driver’s seat depending on where a perceived threat (e.g. pedestrian crossing the road, vehicle in your blind spot) is coming from, drawing your attention immediately to a potential hazard without alarming your passengers.

There are 1,784 cubic feet of total cargo space available behind the front two positions in the Cadillac XT5 once you’ve folded the second row flat. I was able to load a fairly bulky street bike into the vehicle with no hassles, which provides a good idea of how much room there is for hauling larger items. It’s competitive for its class, but not at the top of the size spectrum if you’re looking for maximum haulage. There’s also decent, although not overwhelming, cubby storage throughout the cabin, with a somewhat small centre console buttressed by a pair of door pockets (and a storage nook just ahead of the shifter).

Here’s where I would normally take the opportunity to rail against the CUE infotainment system, but truth be told I only have one major complaint, and that’s the lack of a volume knob for the stereo and/or a rotary tuner for the satellite radio system. I’m not a fan of the touch-slider system snuggled under the touchscreen, but I was more than happy with how responsive and easy-to-use the rest of the infotainment system felt, and how easy it was to access via the steering wheel controls.

The shifter, however, was more of an issue for me. Cadillac has elected to place reverse over to the left, which means unlike most cars pushing the gear selector all the way forward results in neither reverse or park, but actually neutral (with park accessed via a button). The number of times the vehicle rolled forward on me while in neutral, or stayed in drive while I was trying to back up was alarming. Why mess with standard workflow for the driver? There’s no benefit here. 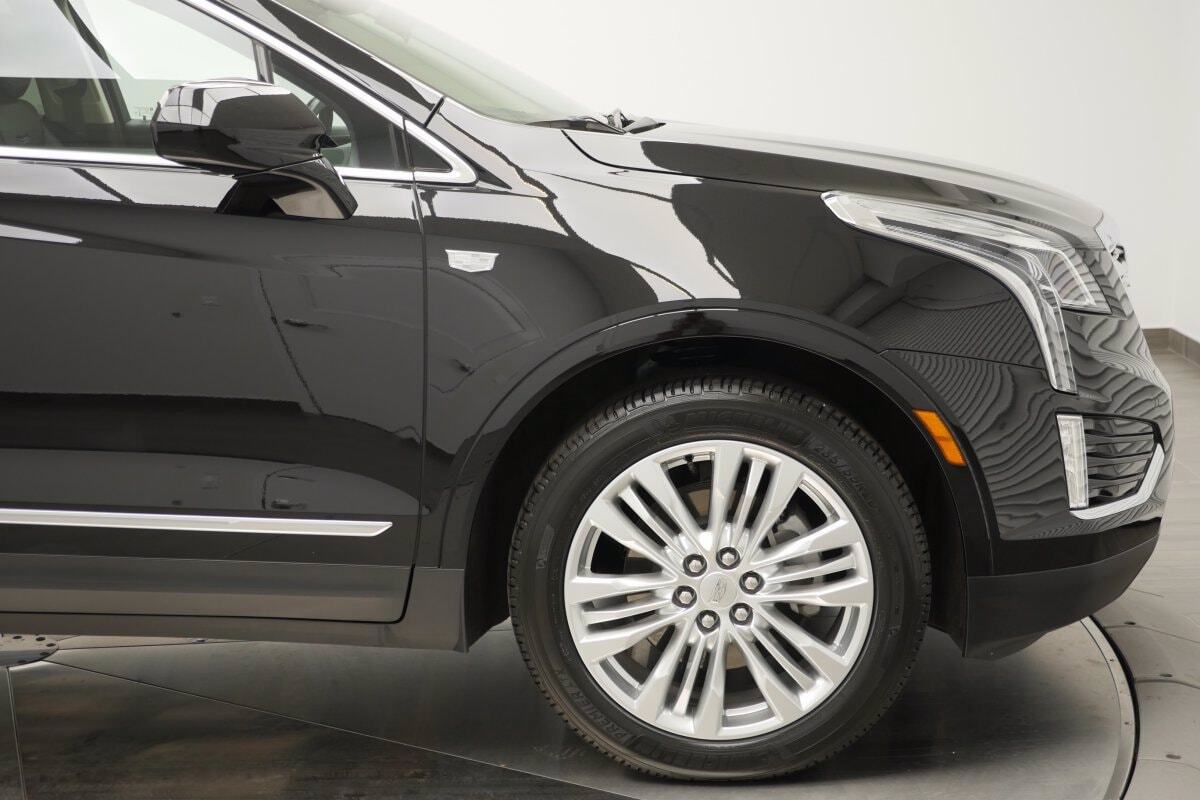 You won’t find anything missing from the 2019 Cadillac XT5’s equipment list. In addition to the extensive safety equipment mentioned above, you get niceties such as a navigation system, Android Auto and Apple CarPlay for integrating mobile devices, a 4G LTE Wi-Fi hotspot, a panoramic sunroof, wireless charging for your phone, and tri-zone automatic climate control. There’s also a useful head-up display, LED headlights, and upgraded interior lighting to be found in the Platinum, which bundles up almost every possible option for the SUV.

There’s only one choice to be had under the hood of the Cadillac XT5, but it’s a fairly good one. The crossover’s standard 3.6-litre V6 delivers 310 horsepower and 271 lb-ft of torque, which is more than enough even with a full complement of five passengers along for the ride. The XT5 feels spirited in daily driving, while maintaining a calm demeanour on longer trips. An eight-speed automatic is standard, while all-wheel drive is optional.

The Platinum trim level’s adaptive suspension system did an exceptional job of handling Montreal’s horrendous road surfaces, smoothing out most of the bumps and crashes and keeping them out of the cabin. Combine this with well-stuffed, supportive seats, as well as decent leg room in the second row, and you’ve got a family-friendly hauler that’s coddles just as well during the daily drive as it does on longer stretches behind the wheel.

Most of the XT5’s rivals have shifted to turbocharged four-cylinder engines which typically bury torque down low, which means you’ll have to rev the Cadillac’s V6 higher than expected when it’s time to really boogie. That being said, for the majority of drivers this will be a non-issue – and the smooth eight-speed automatic ensures that most of what goes on between the drivetrain and the road is as transparent as possible. Handling for the XT5 falls within the expected boundaries for its class, which means it’s neither all that sporty nor too disconnected from the road below.

Still, it’s a little strange to me in this day and age to get behind the wheel of a luxury crossover with a part-time all-wheel drive system. If you stay in the XT5’s Tour drive mode, you’ll have to manually toggle all-wheel drive on and off via a button on the centre console. If you select Sport, AWD is automatically tagged in. Do owners really want to be turning all-wheel drive on and off again, as needed, all winter long? I’d much rather know it’s there working in the background, ready to step in when I need it, than have to remember whether I’d toggled it on a suddenly slippery stretch of road.

Fuel efficiency for the Cadillac XT5 AWD is rated at 12.8 L/100 km city and 9.3 L/100 km highway. You’ll notice that’s not quite as frugal as the four-cylinder turbo competitors I mentioned, but truth be told, in normal driving even a smaller turbocharged engine can have trouble hitting its marks. If you’re easy on the throttle, you won’t notice much of a guzzle from the XT5, but there’s no question that not having a fuel saver model in the lineup hurts the window sticker here.

Remember when I mentioned that the XT5 Platinum trim level was fully loaded? None of that gear comes for free, and with an ask just north of the $72,000, the Platinum is close to $30K pricier than the base XT5. It’s hard to see the value in paying so much for a Cadillac when it doesn’t enjoy the same brand recognition amongst the luxury crowd as similarly expensive models from BMW, Mercedes-Benz, and Audi. Aiming for a mid-tier trim is a better bet if you’re looking to balance comfort and cost.

The 2019 Cadillac XT5 is an intriguing five-passenger luxury crossover that may not stand out in any one area, but instead delivers a solid performance across the board. It’s especially appealing to those who prefer classic lines as opposed to in-your-face styling from their daily driver.

About Benjamin Hunting
Benjamin Hunting is a freelance writer who enjoys keeping the shiny side up during track days. He is also an avid musician and a friend to vinyl.
Follow me
You may also like
7.6