SANTA ANA, California – Rumours have run rampant since early 2016, when Bob Lutz first suggested the mid-engined Corvette might actually make it to production. It would be the culmination of a decades-long dream held by Zora Arkus-Duntov, chief engineer of the first-generation car, who’s also known as “the father of the Corvette”.

Always striving for more performance since the first ’Vette rolled off the production line in 1953, Arkus-Duntov – aware that hardcore racing cars were moving towards mid-engine architecture – introduced Chevrolet’s first prototype with a mid-ship power plant. The CERV I, for Chevrolet Engineering Research Vehicle, was the first of nine such one-off prototypes developed in the ensuing years with every intention towards eventual production. Unfortunately, the automaker’s 2009 bankruptcy put a halt to such development programs, but with their subsequent recovery, a mid-engined Ford GT competitor began to look more feasible.

That GM had also applied trademark protection to the Zora name shortly before Lutz’s pronouncement lent even more credence to the rumours that Arkus-Duntov’s long-awaited dream would finally become reality.

The last couple of years have seen a flurry of quickly snatched spy shots, glimpses of camouflaged test mules, and finally, paparazzi photos – proof positive of a C8 Corvette testing on the Nürburgring. Promo video of a track version of the C8 was released, with an exotic banshee wail rather than the familiar V8 burble leading to even more speculation on the new car’s choice of powertrains – although various reports suggested a twin-turbo V8 producing around 500 horsepower had been developed.

Leading up to the unveiling, teased-out preview photos of a new “Stingray” logo, and a squared-off, F1 style steering wheel that generated some rather divisive internet discussions. Reportedly, GM partnered up with Tremec to develop a new gearbox for the C8, but the aluminum paddle shifters pictured with the steering wheel suggested it may be dual-clutch automatic.

Listening to the buzz leading up to today’s unveiling would suggest that your opinion of the new C8 could be a more accurate age-predictor than any Russian-developed bot farm quiz yet. Many boomer gearheads of the halcyon big-block ’70s era consider it sacrilege – a Corvette engine belongs in front where the muscle-car gods intended. My 40–50-year-old ’Vette-owning friends sit firmly on the fence. Younger folks, all the way down to newly minted licence-holders and hot-wheels-loving eight-year-olds, think the new C8 will probably be the best Corvette yet.

And they’re probably right. The latest Corvette finally crosses the threshold into supercar territory to pose a legitimate threat to the long-reigning Europeans and Japanese. Making its debut before a packed house, or rather hangar, the C8’s coiled haunches and tapered snout are reminiscent of a Ferrari 458. Instead of the traditional long hood and short rear deck, the new car’s cabin moves forward, shortening the nose by 16.5 inches. The engine is cooled by deep air intakes slashed into the car’s rear flanks.

It’s a ground-up reinvention for America’s iconic sports car, but in time-honoured tradition it’s powered by a naturally aspirated 6.2-litre V8. Mounted behind the cockpit, the new engine’s dry sump lubrication lets it sit lower for a more stable centre of gravity. The new mill is derived from the previous LT1, but re-engineered for mid-engine configuration. The LT2 now produces 490 horsepower, or 495 if you opt for the Z51 Performance package. That’s a 30 horsepower bump over the previous engine.

But perhaps more controversial than the engine’s placement is that GM chose to pair it with a Tremec eight-speed, dual-clutch transmission – and no manual. But let’s face it, most of the hand-wringing comes from the enthusiast whose “save the manuals” credo runs to buying T-shirts, not cars. We gearheads may treasure our manual gearboxes, but the buying public has steadily embraced the more tractable – and faster – dual-clutch automatic. The upside is that the new C8 can sprint from zero to 60 mph (97 km/h) in under 3 seconds. In other words, a new base-model C8 can keep pace with a 755 hp C7 ZR1 – currently the fastest factory-built Corvette on the market.

Straight-line acceleration aside, the main reason for relocating the engine to the middle was to make sure the new ’Vette also had supercar handling. Mid-engine cars are inherently more stable, with better cornering ability. Underpinning the C8 is a standard coil-over suspension, and adjustable springs for the Z51 Performance Package. Magnetic Ride Control is also available, offering six selectable drive modes including a new customizable Z mode. Anyone who’s ever scraped their front splitter while entering a driveway will appreciate the new “nose lift” feature that can be saved into the GPS system so the car actually remembers to lift at certain spots.

Just hours before the official reveal, a leaked interior shot, purportedly the C8’s cabin, was splashed across the internet. Decidedly driver-centric, the cockpit is bisected by a prominent centre console, or spine, trimmed with a long strip of switchgear. What appears to be a Lexus-style mouse controller sits beneath a raised display screen angled towards the driver. Seen in context, the steering wheel looks much better than it did in early photos. In fact, the sleek cockpit has a quality lacking in early Corvettes. Aside from the odd row of buttons lining the console bank, the cabin is tastefully executed and worthy of a supercar. Like most of its ilk, the mid-engined C8 has a rather modest trunk that’s capable of swallowing a suitcase or a couple of golf bags. And up front, there’s a “frunk” that can accommodate an overnight bag or a few groceries.

Perhaps the biggest reveal of all is the C8’s price. GM President Mark Reuss announced that when it goes on sale later this year, the 2020 Corvette will start at less than US$60,000 – in Canada, the base Corvette Stingray will start at $72,495. 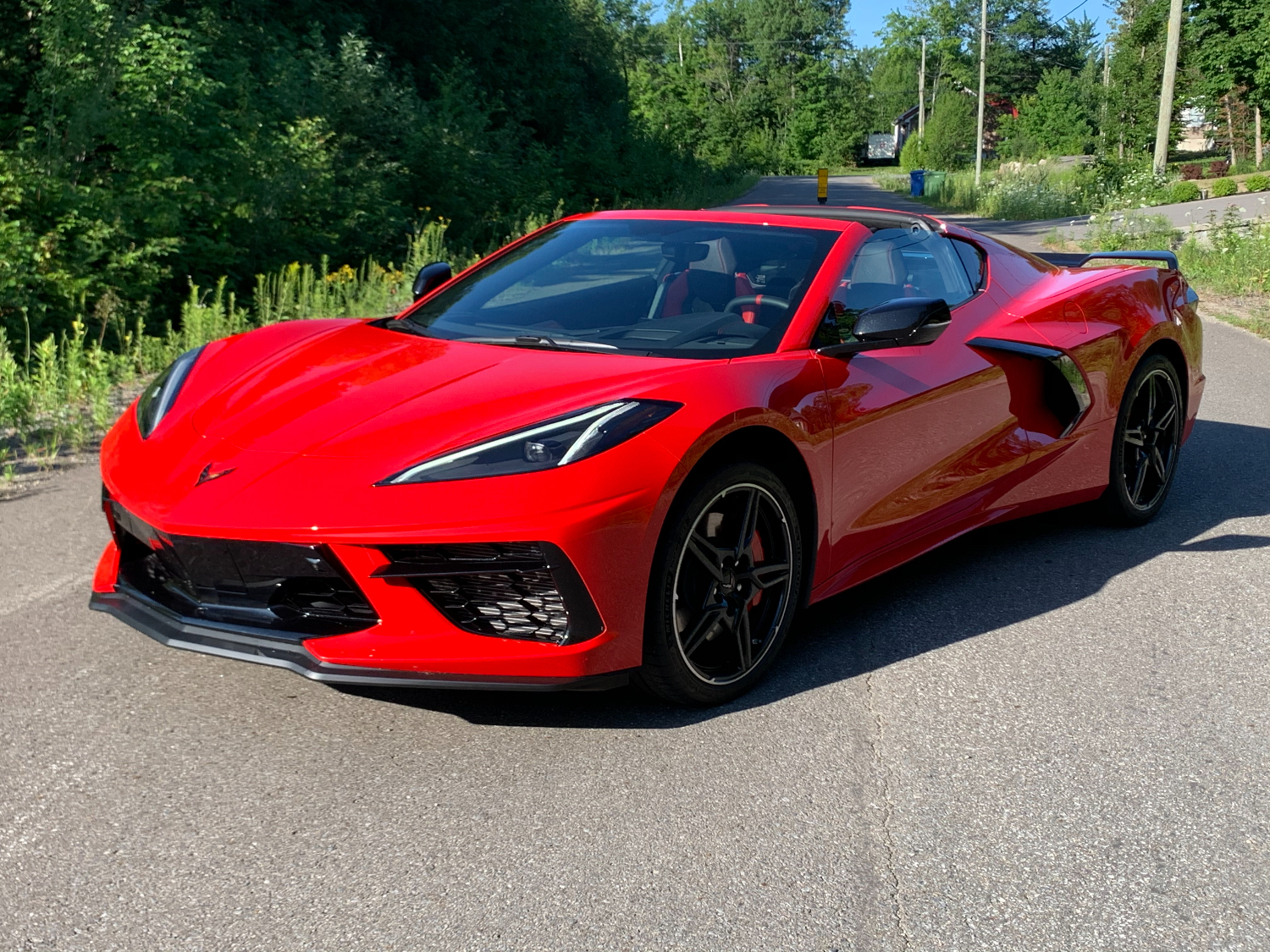 About Lesley Wimbush
In 5th grade, Lesley traded drawings of muscles cars for chocolate bars and things really haven't changed much since then.
Follow me
You may also like
AdChoices
Latest Articles
﻿