It’s hard to avoid the Toyota Corolla and Honda Civic: they’re two of the most popular vehicles on our roads. You’ve likely had one of these two cars in your lifetime, or you may even have one in your garage or with your family right now. That’s nothing to be ashamed of, rather, it’s a testament of these vehicle’s appeal and longevity.

These two cars are known for their affordability and projected reliability, but their most recent iterations – the 2020 Honda Civic and 2020 Toyota Corolla – offer much more than bare-bones transportation. With more features, safety equipment, and lots of space for passengers and cargo, they’re cars that you can use every day for almost every situation.

However, picking one of these two isn’t easy. Even after tons of seat time, it’s still difficult to see a clear-cut winner – by breaking it down and checking each element of the two cars, we might get to a verdict.

Okay, maybe this is the one contest that will be easy to decide. While past versions of the Civic and Corolla are often described as serviceable, these new models are definitely eye-catching – for better or worse.

The Civic only looks good in the shadows, or under the cover of night. The profile is attractive, but that’s about it. There’s a black plastic bar at the front of the vehicle giving the car an exaggerated moustache. The rest of the body is made of harsh angles that don’t go anywhere or give the Civic any kind of attractive aspect. The Civic’s interior is a bit messy, with a mix of materials, accents and a strange layout that takes a lot of getting used to.

The Corolla, on the other hand, looks pretty good, even if it features a large grille. This XSE model has an aggressive look that gives the Corolla an attitude that it lacked for decades. Instead of a moustache, the Corolla sports a frown thanks to its steeply raked hood. There are pods that house LED accent lights at the lower bumper, and a blacked-out spoiler that gives the Corolla that extra bit of cool it’s needed since the 1990s. That extends to the interior, which is cleanly styled with a mix of nice materials that feel and look quite premium.

Both cars are well equipped, and go tit-for-tat in terms of features. The Civic and Corolla both have heated front and rear seats. There’s automatic climate control in both cars as well, although the Civic has a dual-zone setup for added convenience. The Corolla has a heated steering wheel, which is a bit more appreciated here in Canada than a second zone for temperature and fan settings. Like a conclusion to an episode of Queer Eye, it warms you in just the just right way.

The Civic has a few more drive settings than the Corolla, and also comes with a navigation system that’s a slight bit faster than the Toyota’s. While both vehicles have Apple CarPlay support, only the Civic has Android Auto compatibility. Both cars have wireless phone charging, but the Civic has more USB charging ports.

The Corolla doesn’t impress in terms of user-friendliness. It takes a solid second or two for the Corolla infotainment system to recognize any touches. It’s absolutely infuriating, as you wonder whether the screen was pressed hard enough for it to work. Nope, not your fault, it’s just that slow. The adaptive cruise control system is likewise a bit slow to respond to changing conditions, in this case when traffic in front of you advances. It seems a sedated, groggy and uninterested in catching up.

Another frustration in the Corolla is the lack of in-cabin storage space. This is a glaring fault after spending time in the Civic, which not only has shelves and cubbies for whatever random stuff you may have in your pockets but pass-throughs cutouts for cables so the car doesn’t resemble the bird’s nest that happens behind your TV.

The Civic has a slightly better infotainment system, but the addition of Apple Car Play and Android Auto support is important. There are a few too many small buttons and dialogues on the screen, which you’ll fumble on before getting familiar with it. Like the Corolla, the Civic has a lot of driver’s assistance features, with the adaptive cruise control and lane-keeping systems working very well. Contrary to the Corolla, the forward-collision warning system in the Civic responds too quickly – it’s a bit too excitable, bringing unwarranted bright orange warnings on the dash.

The Corolla certainly amazes with its excellent front seats and high-end-looking materials. It also rides smoothly, with bumps and potholes being handled by the well-tuned chassis and suspension. The Corolla is a bit quieter while cruising, although putting your foot down causes the CVT to get excited with a whiney noise that you’ll hear throughout the cabin.

The Civic feels soft on the road, although some would classify it as too floaty at times. It can wallow over speedbumps with a bit of a rear-end wiggle. The Civic’s CVT doesn’t seem to be as loud or working overtime in comparison to the Corolla, but the cabin is a tiny bit louder overall with more road and tire noise.

The Civic beats the Corolla in practicality, however, with larger accommodations for rear passengers, and more cargo space to haul all your stuff.

When the two cars faced off in the past, it was always clear that the Civic is the fun one, while the Corolla is more family-friendly. However, this trend has flipped completely. While less powerful, the Corolla feels more agile, and handles very well. The steering is a touch heavy, giving an impression of stability and poise. The brakes feel extremely confident as well. The biggest issue when driving the Corolla is that the powertrain can feel a bit overwhelmed at times, not making passes or getting up to speed as quickly or easily as the Civic.

Thanks to the Civic’s turbocharged engine, it has lots of torque that gets the Honda going without much effort. This helps with the CVT as well, since the motor doesn’t have to work so hard and stay at high RPMs to deliver power. The Civic fires up and gets up to speed so effortlessly in comparison, it feels like it is in another class. The steering is a bit light, but it feels like a bigger car and not as agile as the Corolla. It might not resonate with enthusiasts, a core group of Civic fans in the past, but that’s one of the compromises the newest Civic makes to appeal to a wider fan base.

Both of these cars have been tested by the Insurance Institute of Highway Safety (IIHS) for crashworthiness, headlight visibility, and usability of LATCH anchors. Between the two models, only the Corolla received a Top Safety Pick rating. The Civic isn’t unsafe, but the institute found the Honda’s headlights to be poor and unsatisfactory.

The cars both come with a huge list of safety features including lane-keeping assistance, forward collision warning and rear-view cameras. They both have adaptive cruise control, as we mentioned before, and the Civic and Corolla have contrasting applications of the tech, as the Toyota is slow and lethargic to respond, while the Civic is more awake, readily responding to changing traffic conditions.

The Corolla also has blind spot monitoring, while the Civic doesn’t. Instead, the Civic has Lanewatch, a feature that displays a camera feed of what’s happening on the passenger side of the vehicle on the infotainment system. It’s not a true blind spot monitor and it moves your eyes away from the road an onto the screen.

The Corolla and Civic have both been rated by Natural Resources Canada, earning very similar figures despite the very different engines and outputs. The Corolla’s 2.0-litre engine with its 169 hp and 151 lb-ft of torque, manages to earn 7.7 L/100 km in city driving, 6.1 on the highway, and 7.0 combined. The Civic consumes a tenth of a litre more in each category at 7.8 city, 6.2 highway, and 7.1 combined.

However, on our test loop which features a fairly balanced drive that combines both urban driving and highway, we found the Civic was more fuel-efficient. This is likely due to the fact that the Civic, with its 1.5-litre turbo that makes 174 hp and 162 lb-ft torque, is lighter and can rely on its low-end toque to get it up to speed, then easily coast, using less fuel; or perhaps its because the Corolla required a firm squeeze of the throttle in order to match the higher speeds needed on highways and suburban streets.

The Corolla is much better than it used to be, with a ton of features and style. However, as equipped in XSE trim, it costs $30,266, which is more than the Civic. The Corolla falls behind in some key areas compared to the Civic, namely size, power, and a few important features.

The Civic seems like the better value, with its price of $29,876. It doesn’t come with a heated steering wheel, but has dual-zone climate control and Android Auto Support. It’s also more spacious and practical compared to the Civic. We’ll admit the Civic isn’t as attractive as the Corolla, which may be a deciding factor for buyers as well.

We get to do this comparison every year, and the results flip all the time – just look at how close the scores are. Whenever a new Corolla or Civic arrives, buyers can expect a whole new generation of impressive compact cars that can be counted on to fit in a buyer’s life. The Corolla is a huge step up from past models, and it really makes a strong impression the moment you see it and get into it. Buyers won’t be disappointed with either vehicle, but they can get more in the Civic. They’ll get more space, more power, potentially better fuel economy, and a more user-friendly infotainment system. All of that comes at a lower price point as well. It’s a worthy winner for most shoppers. 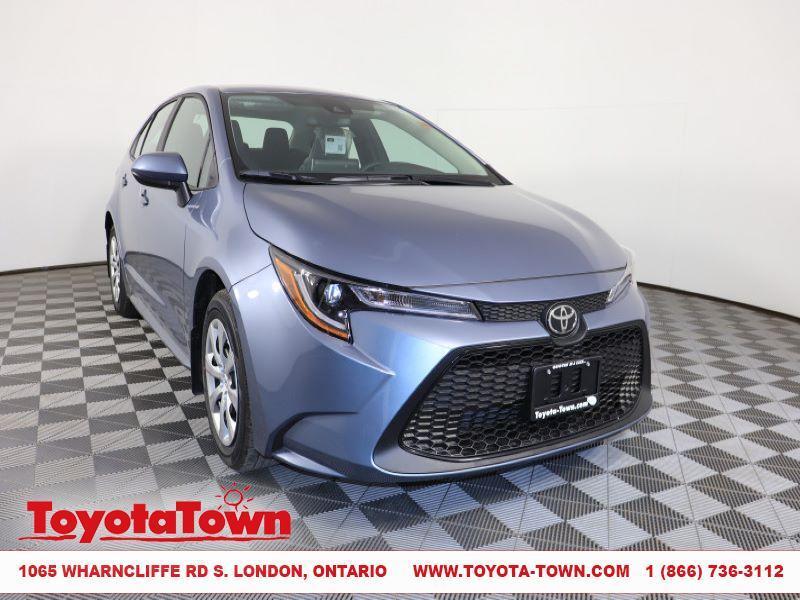