Jeep owners are a loyal, enthusiastic bunch. Buying a Jeep isn’t the end of the journey, it’s just the beginning. While many urban owners see the Wrangler as merely a lifestyle vehicle, aficionados keep an entire aftermarket alive and well – commonly swapping tires, fenders, suspension components and gears, anything to optimize its range and already robust off-road prowess.

FCA has a vested interest in listening to their unofficial brand ambassadors who live and breathe the Jeep life. According to Jim Morrison, Head of Jeep North America, Jeep fans have been asking for three things: a pickup, a diesel in the Wrangler, and finally, the revival of the Grand Wagoneer. Well they successfully got the Gladiator produced and now they’re getting a diesel powerplant in the Wrangler. Available for the first time in a production Wrangler, the 2020 lineup will feature the 3.0L EcoDiesel V6 rated at 260 hp and 442 lb-ft of torque.

EcoDiesel Configuration Unique to the Wrangler

Described as a distant cousin rather than a sibling to that found in the Ram, the third-generation EcoDiesel purpose-built for the Wrangler is heavily revised with few carry-over components. Given the mandate to increase power and torque while lowering fuel consumption, the engine received a collection of parts to increase efficiency and reduce parasitic loss. The engine’s software tuning has also been specifically calibrated for this platform. As Jeeps often find themselves fording deep water and climbing steep angles, the alternator was raised on the engine and an oil sump pump added to ensure essential parts remain lubricated. Shocks were retuned and spring rates increased to compensate for the engine’s added mass. Tow ratings strangely remain unchanged despite the added torque, likely due to the chassis and suspension setup rather than the engine’s ability.

Boasting the most torque of any production Jeep ever, it is also being touted as having the longest range of any production Jeep to date. EPA fuel consumption numbers had yet to be finalized at the time of our test drive, but engineers are estimating a 30 percent increase in efficiency over the gasoline V6 and turbocharged four-cylinder powerplants, despite being heavier.

Visually, the only way to identify a diesel model is by the lone badge on the rear of the vehicle, or by popping open the fuel door where you’ll find the spout to refill the 5.1L DEF (Diesel Exhaust Fluid) reservoir which requires topping up every 16,000 kilometres. If you were to climb under the vehicle, you’d find additional skid plates to protect the urea tank and fuel water separator.

Depressing the brake pedal and pushing the dash-mounted starter button of a Sahara model, the EcoDiesel came to life, settling into idle with a mild chatter. The fact that it’s a diesel engine under the hood is certainly evident, but not intrusive or annoying, even with the roof open and windows down. NVH (noise, vibration, harshness) is managed by sound-deadening material that has been incorporated into the EcoDiesel model, insulating the engine bay and interior to make it less audible. All of these aforementioned additions come at a cost, as it weighs between 181–193 kg (400–425 lb) more than the comparable gas-powered V6 or turbocharged four-cylinder models.

Entering Zion National Park, we followed the steep, narrow road that tightly wound its way up through the canyon. Rather than huffing and puffing or noisily dropping gears as many a large SUV would, we were more than halfway up before I realized I was hardly touching the throttle. The Jeep eagerly and uneventfully pulled us up the hill while we enjoyed the bright, vibrant colours of the sunrise reflecting off the canyon’s Navajo Sandstone walls.

The EcoDiesel retains all of the character and personality that has made the general purpose (Jeep literally comes from the phonetic abbreviation of GP) vehicle so popular since its debut in 1941. It feels like a Wrangler, but it does drive differently without question. Official acceleration numbers were not provided, but with peak power and torque available at 3,600 rpm and 1,400 rpm respectively, throttle response is certainly not lacking off the line or when pulling out to pass on the highway. Power is immediate and robust, accelerating without effort. It doesn’t feel like it is even breaking a sweat. Shifts from the eight-speed automatic transmission are smooth, even imperceptible at times. About as aerodynamic as a brick, the wind noise at highway speeds will be familiar to current owners and masks any evidence of the diesel engine sound. Jeep owners don’t care, that’s just the nature of the beast.

The Wrangler’s on-road persona is one that has received much attention and refinement over the years to appeal to a more mainstream audience, but its capability off-road is what has made it so popular with the die-hard enthusiasts. Travelling to Utah for this test drive was appropriate, as Jeep’s make up a higher than average percentage of vehicles on the road. It seemed like every second vehicle we passed offered up the customary Jeep Wave. Entering Utah’s Sand Hollow Reservoir State Park, we encountered off-road side-by-sides and ATVs by the dozens.

Switching to the king-of-the-hill top trim Rubicon for the off-road portion, the only modification made was to lower the pressure of the 33-inch BF Goodrich KO2 tires to 20 psi for added traction on the sand we’d be traversing and rock faces we’d be climbing – unbeknownst to us. Two transfer cases are offered – Sport and Sahara get a Command-Trac part-time two-speed transfer case with a 2.72:1 low-range gear ratio while the Rubicon gets a Rock-Trac two-speed with a 4.0:1 low-range gear ratio.

Preparing to transition from tarmac to sand, we switched to four-wheel drive high and our convoy carried on without incident. Approaching a steep hill, I assumed we’d be turning back or going around it, but we were instructed to engage four-low and proceed. And proceed we did. At that point it occurred to me that we’d already far exceeded the capability that a significant number of urban owners will ever experience. And that was just the beginning. The next series of obstacles required us to disengage the sway bars and engage the front and rear locking differentials with the mere push of a button. Without a hint of protest, the Rubicon climbed massive boulders, ascending and descending steep rock faces that defied physics and logic. The off-road apps in the infotainment system let us follow along on our journey, providing readings of pitch, and roll. The capability was astounding and yet most will never experience it.

Getting Down to Brass Tacks

Now for the fine print. The $7,395 option also requires ticking the option box for the eight-speed automatic, which will cost you an additional $1,795. Manual transmissions currently only make up 10 percent of sales in Canada anyhow. This new diesel powerplant is exclusive to North America; however, the European market already has a 2.2L diesel option. The EcoDiesel is currently only available in the four-door versions of the Sport, Sahara, and Rubicon – but two-doors now only account for 10 percent of Wranglers sold. It was also teased that the Gladiator will get the EcoDiesel V6 in 2020.

Customers specifically asked for the diesel and they are available for order now. Time will tell if they are as enthusiastic with their pocketbooks as they are with their demands. Now about that Grand Wagoneer… 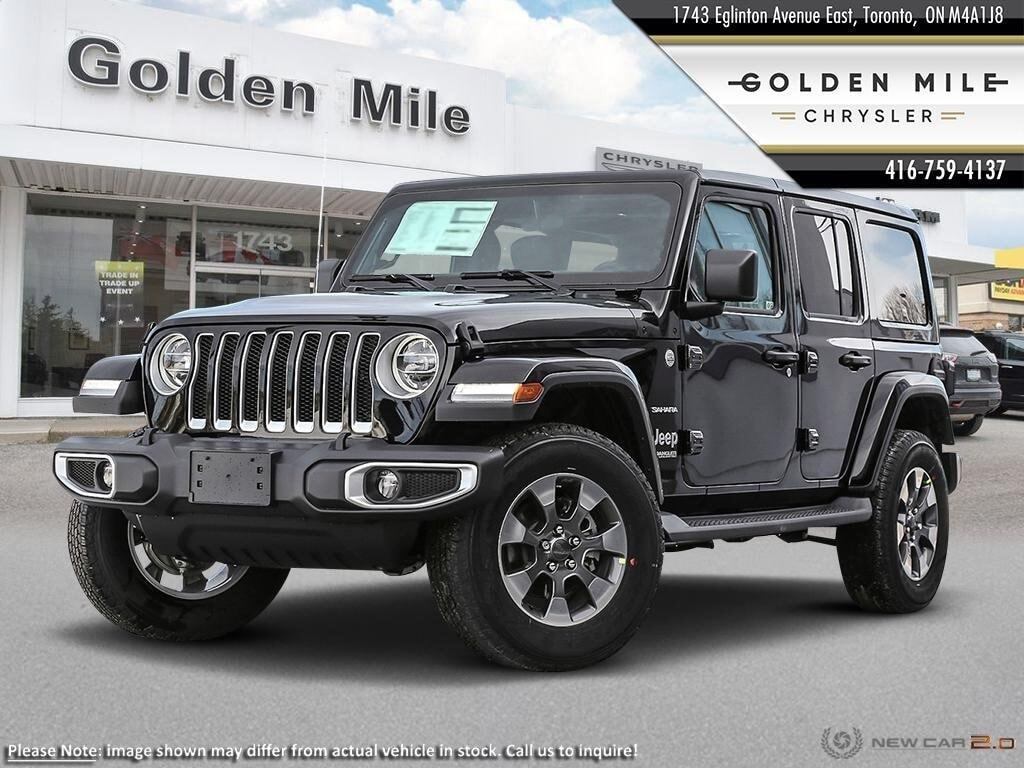