Less is more, so the saying goes, but it’s obvious Jaguar believes more is more. Most F-Pace models carry a turbocharged 2.0L four-cylinder that ramps out either 247 or 296 horsepower, or a 380-horsepower supercharged V6 in the S; but for 2019, Jaguar has gone even higher. I’m in the new F-Pace SVR, with a supercharged V8 shoehorned under the hood that sends 550 horses and 502 lb-ft of torque to all four wheels. The privilege of ownership starts at $89,900, but my tester was garnished with several options that took it to $103,050 before freight and taxes.

All sport-utes share a general shape, but this automaker makes the most of its box-on-box canvas. It’s unmistakably a Jaguar, with taillights reminiscent of the F-Type, but with some unique-to-SVR styling cues, including its bumpers, rear spoiler, and the “nostrils” on the hood. The roof stays almost level to the rear – the black frame of the panoramic roof against my tester’s white paint gave it a more swoopy appearance in profile – to provide headroom in both the front and rear seats.

The wheels are 21 inches by default, but my tester was fitted with gloss-black 22-inch rims that added $2,550 to the price. Another option on mine was a heated front windshield, for an additional $440. It uses finely spaced vertical wires that heat up to melt ice, and they work well in winter, but I wouldn’t add it to my own. Once you spot the wires, you can’t “un-see” them, and I find it tiring to constantly try to look past them.

The F-Pace hasn’t been crash-tested by the American authorities (NHTSA or IIHS), but has earned a top five-star rating in Europe’s NCAP (New Car Assessment Program) testing.

I’d have given it a higher rating, but blind spot monitoring and emergency braking aren’t standard – surprising to me, given the price – and are instead bundled into a Driver Assist Package along with adaptive cruise control, steering assist, and a surround-view camera for an additional $3,600.

The F-Pace has the practicality inherent to an SUV, with its cargo area accessible through a power liftgate, and with a 40/20/40-split folding rear seat that can be folded for extra storage space, or used as a pass-through for long items like skis, while still seating two people alongside them.

The front console is sleek and smooth, but there’s not a lot of small-item space where you can stash items for quick access. Or perhaps that’s the idea: nothing to roll around when you’re out carving corners in this beast.

The F-Pace – like most Jaguar models – is an almost 50–50 blend of beautifully simple and annoyingly convoluted. Climate functions are handled through adequately sized buttons on the centre stack. Volume control is a knob. The steering wheel’s buttons are on angles, making it super-easy to navigate between them with a minimum of distraction. One of them operates the heating function on the wheel, rather than going through a computer screen.

But then there’s the other side of it. Jaguar’s signature dial gear shifter is replaced by one of those awful electronic monstrosities, which requires you to push forward to reverse, and hit a button to park. (Yes, you can make your manual-mode shifts with it, but the wheel-mounted paddles are my go-to.)

To select a drive mode, such as Sport or Eco, you’d think you’d hit the long, console-mounted button with the icons – but no, you tap the tiny buttons on either side of it. And while the centre screen is touch-activated, it’s among the industry’s worst for being tough to quickly access and figure out the functions.

A vehicle this pricey needs to deliver, and for the most part, the F-Pace SVR does. The list of standard features is a long one, including navigation with traffic sign recognition, heated and cooled front seats, heated rear seats, quilted leather upholstery, power-adjustable steering wheel, adaptive LED headlamps, panoramic roof, and headlamp washers.

In addition to the mandatory rear-view camera, the F-Pace adds a front-facing one. Lane-departure assist is standard equipment, although lane-centring steering assist is an option.

But if you want to go right to the top, you’ll have to open your wallet. My tester had a Luxury Interior Package, which for $1,475 added four-zone climate control, premium floor mats, “suedecloth” headliner, air quality sensor, locking cooled glovebox, illuminated sill plates, and two 12-volt sockets for the rear passengers. I also had a $1,020 head-up display, $600 premium sound system, a CD/DVD player for $100, and another $100 to add satellite and HD radio. My tester was also equipped with an Activity Key for $410 – it’s a key disguised as a waterproof wristband for when you don’t want to carry the fob – although Jaguar had not included it in the vehicle handed out to the press, no doubt wisely due to the possibility of someone not remembering to return both car and bracelet together.

As the bumper sticker says: sit down, shut up, and hold on. The supercharged 5.0L V8 churns out 550 horsepower and 502 lb-ft of torque, and there’s not a split-second of lag when it’s delivering it – one of the inherent benefits of a supercharger over a turbo. The power stays strong through the mid-range, with lots of pedal left when you want to pass at highway speeds.

Many at the country club will rattle off even more impressive numbers from what they’ve arrived in. The BMW X5M delivers 567 horsepower; Mercedes-Benz’s AMG GLC 63 S gives 516 lb-ft of torque; the Porsche Cayenne Turbo has 568 lb-ft of torque; and the Jeep Cherokee, in Trackhawk form, tops everyone at 707 horsepower and 645 lb-ft of torque.

You may not be able to brag at their level, but the F-Pace is no slouch. Jaguar claims zero to 100 km/h in 4.3 seconds on its way to a top speed of 283 km/h, and while I didn’t check it with a stopwatch, I don’t doubt the number. Seat-of-the-pants is everything, and this Jaguar’s immediate response to throttle is extremely impressive, not just in how it moves out, but in how smooth and linear that quick acceleration is. This is the definition of an iron fist in a velvet glove.

Precisely how comfortable the F-Pace is depends, to an extent, on who’s in it. The bolstered front seats are relatively narrow, and I am not. That aside, they are supportive, with fourteen-way power adjustment. The rear seats also receive more side bolstering than in the regular F-Pace models for when you want to impress a full house with what this thing can do. Rear seat room is decent for the F-Pace’s size, and it’s easy to get in and out.

The real beauty of the F-Pace SVR is that it might not be the most powerful performance SUV on the market, but it’s one of the best for being a complete, well-rounded package. It’s got the grunt, delivered through a smooth, quick-shifting transmission to all four wheels. The V8 makes all the right eight-cylinder sounds, and when you hit the sport exhaust button, a wonderful burble comes out the tailpipe, and even some great pops and crackles that yell, Hey, hot rod here!

The suspension is sport-tuned with extra stiffness, but it still glides over the asphalt, soaking up imperfections and sending almost no indication to occupants when the pothole people haven’t yet gotten around to filling the divots.

Everything about the F-Pace’s execution is impressive, from the well-weighted steering and its precise response, to the way the vehicle tucks in around hard curves, with rear-biased all-wheel drive that can send everything to the back on hard throttle, and torque-vectoring managed by the braking system. It drives like something much smaller and lighter, it brakes confidently with linear pedal feel, and it does all that while wearing the stock all-seasons wrapped around its rims. I’m rather surprised, though, that Jaguar doesn’t offer a sticky-summer-tire option on the list.

I hate to use the word “value” when something’s banging up hard against six figures, but if you’re shopping in this bracket, the F-Pace SVR may have less horsepower but also requires fewer dollars. Among the competitors previously mentioned, the Mercedes-Benz GLC 63S is the closest at $92,300; the Jeep Grand Cherokee Trackhawk is $102,000; BMW’s X5M is $112,400; and Porsche wants $141,800 to put you into its Cayenne Turbo.

Numbers don’t always tell the whole story. The F-Pace SVR may not top the power charts among its rivals, but it’s not just about going for grunt. Take it for a turn before you make your decision. I expect it’s going to surprise you with how well it combines everything for a very satisfying performance driving experience. 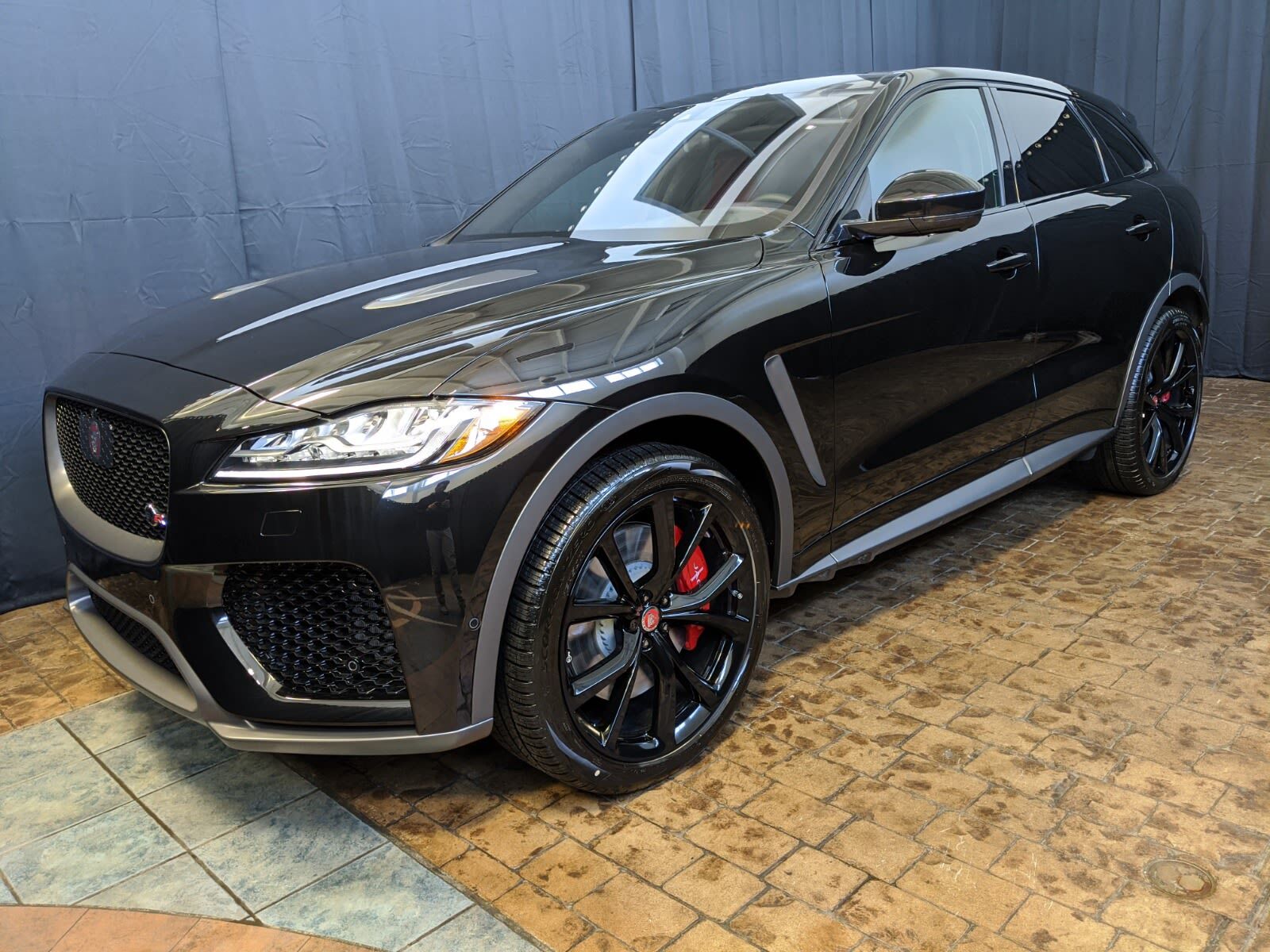