One of the pioneers of the crossover game, the made-in-Canada Toyota RAV4 received a redesign for 2019 that has it looking very unlike any version before it.

It’s tougher-looking, more chiseled, a little more purposeful, and, if I’m honest, my favourite looking RAV4 of all-time. For 2020, Toyota has gone back to the drawing board and added even more toughness to the already rough-and-tumble RAV4 Trail model with the TRD Off Road package.

Since the latest RAV4 has already been given a big boost in the toughness department with the addition of squared-off wheel wells, an enlarged grille, and a boxier silhouette, it seems that not a whole lot had to be done to get it to Trail status, let alone TRD Off Road. There are some new 18-inch wheels shod in chunkier tires (switched for winters on my tester), higher-profile roof rails, and thicker wheel-arch moldings; that’s about it.

The suspension tuning that’s only offered with the TRD Off Road package doesn’t change the ride height, and my tester’s Lunar Rock paint and contrasting white roof is available on the Trail trim without the upgrade package. That’s all fine by me.

The fact that the additions haven’t changed the styling all that much means the RAV4 – even in this spec – retains the good looks that have it looking like the offspring of some of Toyota’s larger SUV offerings, and probably the best-looking mainstream crossover out there today this side of the Mazda CX-5. That’s a remarkable achievement, making the RAV4 actually kind of... cool.

The interior helps. A few controls are chunky and rubberized for better grip and more ease-of-use with gloves on. That’s matched by a rubberized coating on the inside of the door pulls, and other nifty bits of textured toughness. The TRD Off Road version is only offered with a black interior – the Trail can be had with a brown-and-white cabin – and adds some red highlights, as well as TRD logos on the front headrests.

When it comes to infotainment, it seems Toyota simply refuses to change with the times. Like so many other vehicles in the brand’s lineup, the RAV4’s system features dim graphics, a slightly laggy touchscreen, and a general sense of malaise about its operation. At least there’s Android Auto compatibility now, and the JBL audio that comes as part of the TRD Off Road package – as well as the top Limited trim – is a nice addition.

When it comes to interior space as well as ergonomics, I found very little fault with the RAV4. The driver sits quite high, providing a great view out over the squared-off hood. I found the seat to be just a little flat, though, which did have me sliding around a bit through bends. Most owners will likely take no issue with this, as I don’t know how much aggressive cornering they’ll be doing in their RAV4. The controls, meanwhile, are all easily within reach and the cupholders are low enough to keep larger coffee cups out of arm’s way, too, which is important.

Sitting in the back seat is what really drives home the fact that Toyota has its stuff together with the RAV4’s cabin. It’s incredibly spacious in the back – even behind a driver’s seat set for a 6-foot-3 occupant like myself – and it had me wondering how the heck they managed to find the space. Yes, the RAV4 is a little wider and has a longer wheelbase than previous, but the numbers aren’t that different. Either way, it’s roomy enough to fit a family of four comfortably.

Unfortunately, the ride didn’t have me quite so enamoured. While the suspension in this trim has been tuned for off-road work, I thought that would soften the ride (after all, a softer suspension setup means more flexibility over uneven terrain). Unfortunately, it’s a little crashy and, coupled with a slightly strained engine note, had me thinking too much about how hard the vehicle was working.

While I will always bemoan the lack of 40/20/40-split folding rear seats – it’s a 60/40 split in the RAV4 – as I like the ability to carry longer items without having to lose a proper seating space, the 1,977 L of cargo space you do get with the seats folded flat (which still adds up to over 1,000 L when you leave them up) puts the RAV4 right up near the top of the segment, just below the CR-V.

Speaking of the CR-V, it’s got a wonderful multi-tiered centre console area, which makes storing a variety of items that much easier. While the RAV4’s bin is deep enough, having no real way of dividing it does limit its usefulness. I am a fan of the shelf above the RAV4’s glovebox, though; it’s perfect for sunglasses and other smaller items.

Like all non-hybrid RAV4s, the Trail TRD Off Road gets a 2.5L four-cylinder engine that’s good for 203 hp and 184 lb-ft of torque, putting it in the midst of the competition in the segment when it comes to power. It’s channelled to all four wheels through an eight-speed automatic transmission – that’s correct: no continuously variable transmission (CVT) here. Those transmissions tend to be loud, which would likely compound the aforementioned issues regarding suspension and engine noise, making the RAV4’s transmission welcome by comparison.

Indeed, while the 203 hp the RAV4 will have it wheezing a little bit on steeper climbs, it’s spot-on for what most people are going to be using this for: highway-heavy road trips and hockey practice. Because even in TRD Off Road spec, the RAV4 will likely still be treated by most as the family-mover it’s always been.

Despite this, the RAV4 not only possesses a few 4Runner-ish styling quirks, but it also has a version of the terrain-select system found in its larger sibling. There’s a dial atop the transmission tunnel that lets you choose from between Mud/Sand and Rock settings, as well as a button for Snow mode, and a set of buttons for various powertrain settings. There’s even a hill-descent control system that makes use of the cruise control to focus on throttle and braking on steep grades so you don’t have to. It applies the brakes a little violently during its operation, but it does its job.

While I found the ride left something to be desired, I enjoyed the way the RAV4 handled otherwise. Steering is direct and actually has what I’d call a modicum of feel, and that’s more than can often be said when it comes to this segment this side of the CX-5.

I didn’t do any of the off-roading one might in the likes of, say, a Jeep Cherokee Trailhawk. I did, however, run the RAV4 in some properly hardscrabble dirt roads in the mountains around Vancouver, and it performed as expected. Larger bumps were absorbed well enough, and the feeling of substance you get when driving in normal conditions is somewhat amplified here. Especially if you select one of the adverse-condition drive modes, which have the RAV4 grabbing and spitting gravel through the treads of its tires, even though I was on winter rubber as opposed to the more off-road-centric rubber that comes standard on this spec.

Put simply, I can’t think of any notable misses in the safety department here, and I would suspect few buyers will either. If there was one issue I have with the safety systems on offer, it’s just how violently the wheel gets yanked in your hands when the system senses the vehicle wandering from its lane of travel. It can be disconcerting, and actually startled me on some occasions.

The 8.6 L/100 km that Natural Resources Canada (NRCan) found for the RAV4 Trail TRD Off Road puts it near the top of the segment; the CR-V does slightly better, but the Santa Fe, Cherokee, and Ford Escape (depending on its engine) all come up short against the RAV4.

The Trail trim starts at $38,890, putting it second from the top pricewise in the RAV4 lineup. The TRD Off Road package adds an additional $2,820, which does bring it above the base price of the larger Highlander. With that in mind, the features the TRD Off Road package adds are becoming of that price tag, especially when you consider the great audio system and toughness added by the bigger tires. Not to mention that competitor offerings come in around the same price for similar spec, and none of them – save the Cherokee Trailhawk variation – have quite as cool an air about them.

It’s hard to go wrong with a sub-$45,000 pre-tax price tag when a vehicle is as well-equipped as the Toyota RAV4 Trail TRD Off Road. Having also driven the Trail without the added package, it’s the most refreshing take on the RAV4 I’ve ever seen. The TRD Off Road kicks it up a notch in the coolness department – hardly a traditional strength of the RAV4 – and adds some practicality to boot. 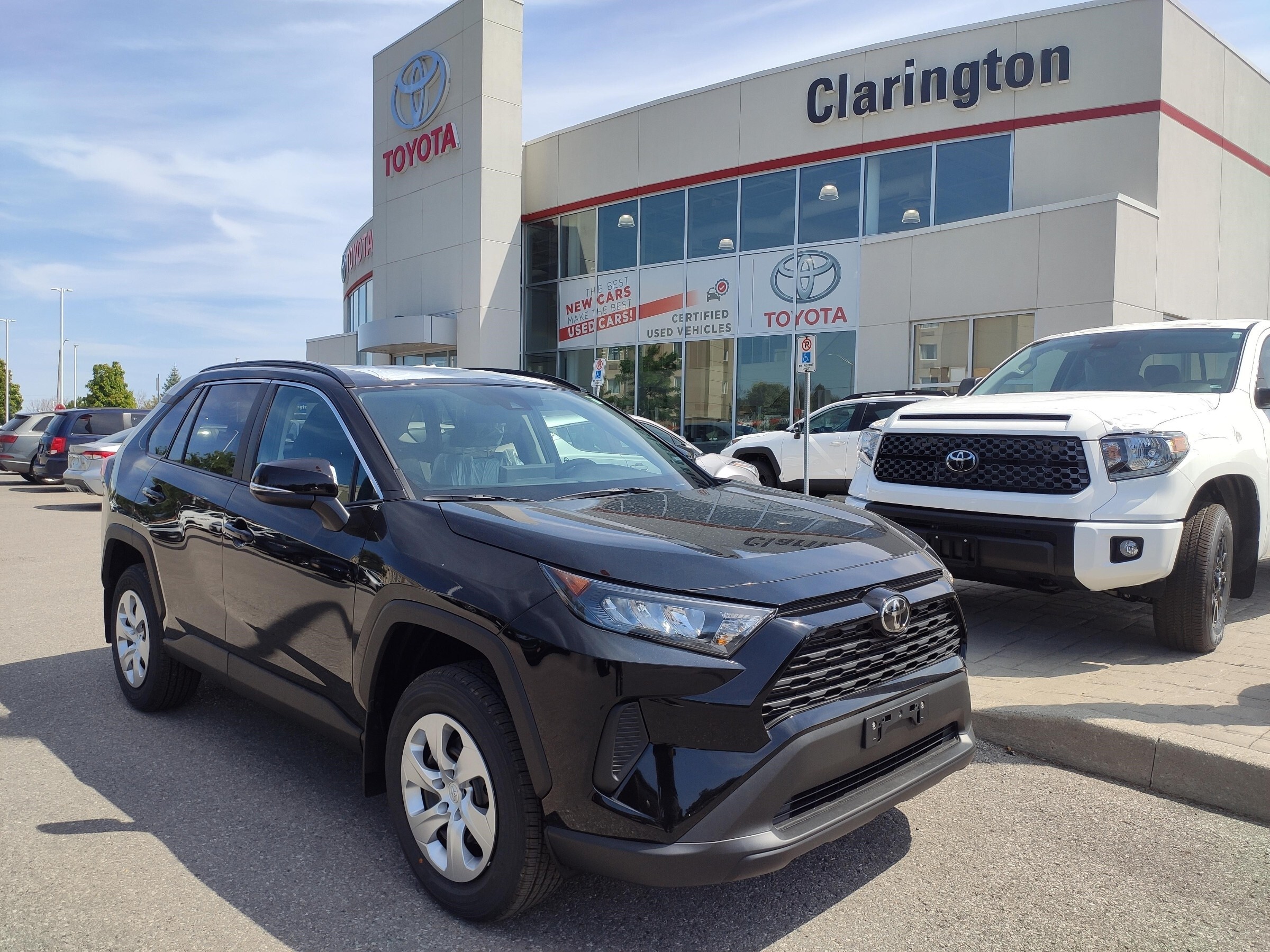