In light of speculation that the next-generation 718 Series will be fully electric, the fine folks in Stuttgart are sending a love letter to the Boxster faithful in the form of the 2020 Porsche 718 Spyder.

A 4.0L naturally aspirated flat-six-cylinder making 414 hp and 309 lb-ft sings to 8,000 rpm and drives the rear wheels only through a six-speed manual gearbox. Underpinnings from the 911 GT3 RS escalate the Boxster’s already sublime handling to the next level of response, grip, and clarity. This is one of the best Porsche sports cars, period.

This is a very pretty car, especially in its Gentian Blue Metallic hue ($740). Okay, maybe pretty isn’t the right word. How about gracefully menacing? Seductively sinister? The Spyder’s visual signature is its long rear-deck lid with dual humps that resolves at a ducktail spoiler, all exposed to the world once the manual soft top is tucked away.

The 718 Spyder rides on 20-inch wheels and sits 30 mm closer to the ground than the standard Boxster. Up front is an aggressive snout bearing three large grille openings, a curb-kissing splitter, and the GT-series slim mesh grill just ahead of the hood that vents air from the front radiators. Out back are two large exhaust tips and a functional diffuser. With the roof in place, the fabric flying buttresses signal this to not be your regular Boxster.

If you’re looking for the usual laundry list of driver aids and safety systems, you won’t find them in this most driver-focused of 718 Series cars. Hence the Spyder will not keep you in your lane, dutifully follow the vehicle in front, nor warn you of a car lurking in a blind spot – of which there are plenty with the manual roof in place.

However, if you count brakes as one of the most important safety systems, the 718 Spyder has your back. Lifted from the 911 GT3, the Spyder’s brakes feature 380-mm vented and cross-drilled discs both front and rear, with six-piston monobloc calipers in front and four-piston units in the back. These in combination with the super-sticky Michelin Pilot Sport Cup 2 tires deliver stopping forces that will part the hair on the back of your head.

The 718 Spyder comes with two-piece rollover protection and a host of airbags, including side protection bags for both thorax and head. Porsche asks $2,450 for full LED lighting, which is an upgrade over the standard bi-xenon lights.

Inherently there can be very little practicality baked into a hardcore two-seat, mid-engine roadster. But every Boxster, no matter which variant, has an ace up its sleeve. Actually, two aces in the form of front and rear trunks, here measuring a useful 150 L and 120 L, respectively. In this rarefied world, the 718 Spyder kicks its competitors when it comes to usable cargo space.

In the cabin we find a decent-sized glovebox, two cubbies in each door and a small storage compartment between the seats. There are a couple of swing-out cupholders that will hold a small can or cup of coffee – until you step on the gas. Porsche charges $640 for a smartphone compartment.

Well, this is a tough one. Looking at the 718 Spyder through the lens of normalcy, this little roadster is not particularly user-friendly. A fussy manual-operated top? Only a six-speed manual transmission? No proximity key or push-button start? A stance so low to the ground there’s no way to gracefully enter and exit? By those parameters, it’s a fail.

But if the user is looking for friendliness in terms of brilliant chassis dynamics, talkative steering, snickety short-throw shifter, and a standard stability control setting that allows just enough rear-end slip to make you feel like a hero (and likely kill those pricey rear 295/30ZR20 Michelin Pilot Sport Cup 2 gumballs in a season), then 718 Spyder immediately sidesteps mere friendliness and burrows its way into your hapless heart.

The Spyder’s cabin does not have Porsche’s latest touchscreen/haptic panel interface, hence it’s blessed with an array of analogue buttons, toggles, and rotary knob for just about all infotainment, HVAC, and dynamic functions.

However, the roof takes a couple of minutes to raise or lower. The front latch has a power release, after which you manually unfasten each “flying buttress,” fold them up, and clip them to the backside of the roof on either side of the little plastic backlight. Then you lift up the boot lid then fold the roof back into its recess. Finally, flip down the two little winglets at the base of the B-pillars, close the decklid, and you’re on your way.

My wife asks, “So you’re paying more for a flimsy manual roof with no lining? What happens if you get caught in the rain with the roof down?” Uh, yes, and I’ll probably get wet.

For a car with a $110,500 starting price, the 2020 718 Spyder is pretty slim on features. You’re paying for the engineering purity and the privilege of owning one of the best sports cars Porsche has ever produced. The fact that you will pay extra for heated seats, auto-dimming mirrors, dual-zone climate control, rain-sensing wipers – and I could go on and on here – only means this specialized vehicle homes in on a very specialized demographic.

As mentioned, the usual radar- and camera-based driver aids aren’t on the menu, nor will you find Porsche’s dual-clutch automatic transmission. But you can spec the seatbelts and gauge faces to match your car’s exterior paint, and Porsche offers track-ready carbon-ceramic brakes for $9,130. There’s also a $5,360 stereo that on the face of it seems like a colossal waste of money. Not because Porsche’s Burmester-branded systems don’t sound good; they are generally spectacular. But simply because the Spyder’s cabin is a symphony of engine, wind, and road noise. Not exactly the optimal environment for enjoying a high-end audio experience.

Porsche has traditionally kept the Boxster/Cayman duo in the shadow of the 911, always holding the performance of these mid-engine cars somewhat in check. With this 4.0L naturally-aspirated flat-six engine, the siblings are finally off the leash. This engine is a bored and stroked, turbo-less version of the 3.0L twin-turbo unit found in the 911, and it has been developed especially for this application (and the slightly less powerful, less edgy 718 GTS 4.0). It has a somewhat unique sound in the lower rev range; mechanical, guttural, and a bit gruff. Maybe not as sweet as we’re used to from Porsche’s sixes, but no less purposeful.

There’s plenty of useful torque down low, but from 5,000 rpm to its 8,000 rpm redline this engine goes on an absolute tear, blasting the Spyder forward with unrelenting force and a spine-tingling howl. It’s a wholly addictive and emotional experience, linear in its power delivery and so pure of purpose it makes you want to scream along.

The 718 Spyder is surprisingly comfortable for such a laser-focused sporting machine. By all accounts, the 20-inch wheels and lowered sport suspension should deliver a punishing ride. Not so. Granted, the ride is firm, but with the PASM in normal mode there’s no untoward crashing, jostling, or jarring over rough surfaces. Select the stiffer setting and you’re still well within the bounds of civility.

I found the optional 18-way adaptive sport seats ($3,010) to be supremely comfortable and supportive. Top down with the side windows raised there’s little wind buffeting at speed.

What you don’t get in this lightweight special is much in the way of cabin isolation. The big Michelins transmit plenty of tire and road noise, and of course that vocal six sitting just behind your shoulders is the kind of music you don’t want to shut off. Topping things off, the single-layer fabric roof does little to keep out sound.

This is the very reason why a few dedicated souls will gladly part with $130,000 for the privilege of owning this most focused of Boxsters. On the right road – which seems to be just about all of them – the 718 Spyder becomes an extension of your motoring will. All controls blend with transcendent mechanical harmony, working with the sublimely balanced and nuanced chassis to give you what you need. Out for a cruise? Well that’s just fine. Want to push to the pointy edge? The Spyder lives for that, and while its outer limits are friendly and ultimately forgiving, this is a car that ultimately needs to be exploited on the track.

For a car that essentially begs to have its neck wrung from dawn ’til dusk, Porsche incorporates some clever fuel-saving measures for those times when you’re not driving hard. Auto start/stop shuts down the engine at a stoplight when in neutral and the clutch released. Simply dip the clutch and it refires. There’s also cylinder-deactivation that has the 4.0L running on one bank of cylinders during coasting and light throttle loads. To keep things even, the banks switch duty every 20 seconds. There’s a change of engine tone when this happens, dipping to a lower drone, and you’ll be surprised at how often you’re running on three cylinders. There were no Natural Resources Canada (NRCan) fuel economy numbers for the 2020 718 Spyder at the time of writing, but Porsche Canada quotes 14.3 L/100 km city and 10.3 L/100 km highway.

Another contentious category for 2020 718 Spyder. My wife wouldn’t cross the street for this car, but in my opinion this roadster is worth every penny of its $110,500 base price (and the probable $20,000 or so in options). It’s a future classic that will very likely hold its value, if not appreciate. The first-gen 987 Boxster Spyder (2011) is now highly collectible and prices are rising. But this is not the reason to buy the 718 Spyder. Not a lot of people will go for this pricey special, but I guarantee none will feel they overpaid.

If the 2020 Porsche 718 Spyder is indeed the last, greatest gasp of the naturally aspirated Porsche Boxster, it makes for one heck of a swan song. This two-seat droptop is the absolute truth in sportscar motoring – beautiful, exclusive, accommodating, built to the highest standard, and pure poetry on the road. The 718 Spyder takes everything that has enthralled enthusiasts with Porsche’s little mid-engine roadster since its 1997 debut and cranked it up to 11 while still embodying its purity of spirit and friendly enthusiasm. 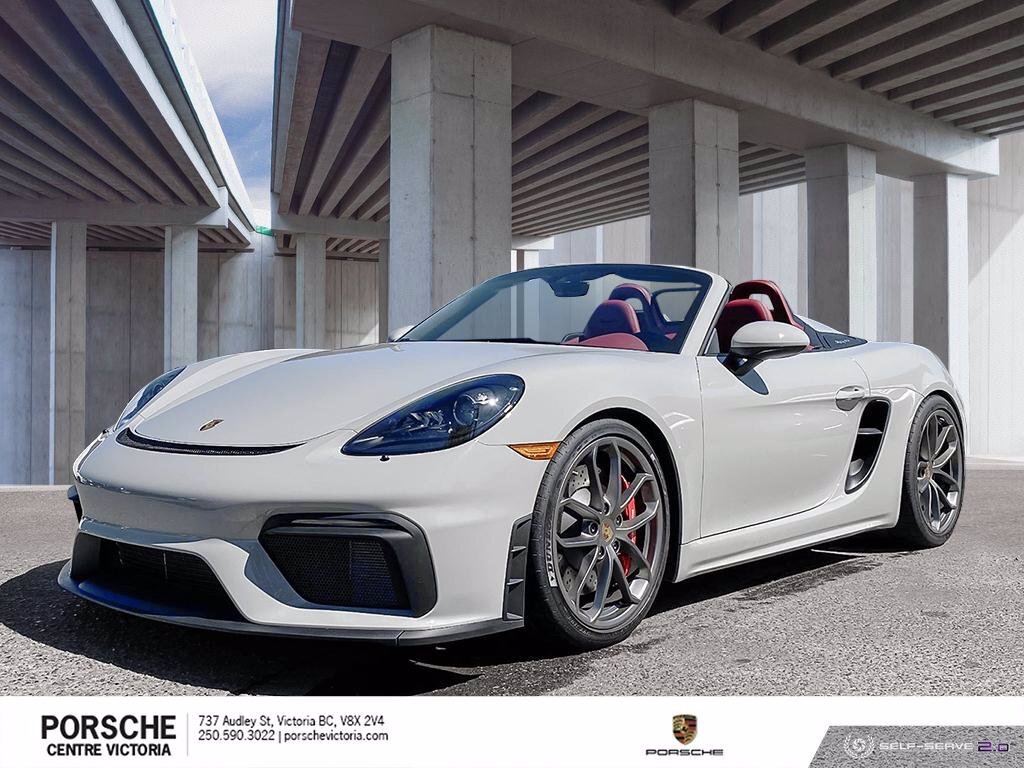 All Articles by Peter Bleakney

Peter Bleakney is a Toronto-based automotive journalist. He is also a member of the Automobile Journalists Association of Canada (AJAC).