Suzuki’s 2015 GSX-S750 is a new beast here in North America, but it’s been kicking around in other markets as the GSR-750 for a while now. The naked sports bike/roadster/sporty standard thing is a common trope these days.

Grab your engine from a supersport (in this case a 750cc inline-four from the GSX-R750), put it in a slightly less sporty frame with a different set of handlebars, minimal fairing and maybe some of the cheaper, more streetable parts lying about and…. Voila! A tough-looking streetbike with the heart of a sports bike and the cred factor to match. This GSX-S750ZA is another well-executed example of that theme.

“Za? What is “Za”? – you might well ask yourself. Or, if you’re like me, you’d ask the Suzuki PR department. “ZA” is the extra lettering added to the 2015 Suzuki GSX-S750 to denote that it is the blue and white one, not the black one. Simple, right? Kind of; the Suzuki Canada website now refers to this as the “Z” – the A is missing. Anyway, the point is the same, one is the black version, the other one is colourful with more vibrant gold anodized front forks and a red rear spring, as well as the Suzuki corporate livery.

Styling is classic roadster. Low, flat bars for a “street-ready” yet “aggressive” stance, teardrop headlight, beak-like radiator shrouds and a clearly demarcated passenger seat. Like all naked sport bikes this one could use a belly-pan fairing to tie it together, but otherwise looks cohesive – even if the front fender is a tad overwrought. 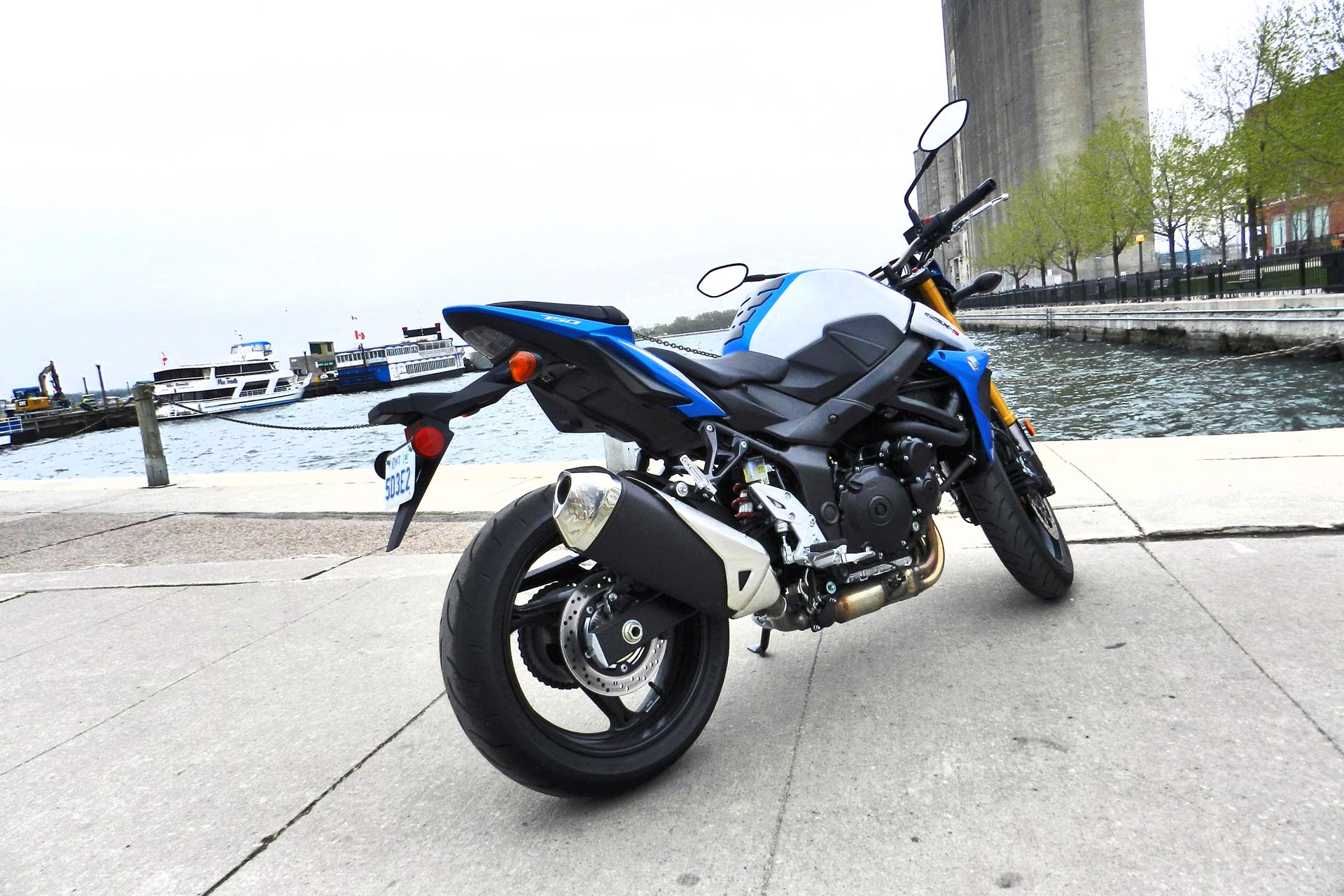 But I digress – all that naming convention stuff had me over-thinking the aesthetics. Actually, aesthetics here mean a lot. The bulky airbox cover says “aggression” but the fork rake says “standard”, as does the rectangle box swingarm and the non-radial front brakes. Those aspects hint at the true age of this design. As I said, it’s one that’s been kicking around for a while now. Even the large muffler on the side looks dated compared to the stubby units found on many competitors.

The upside-down forks are a saving grace, and a feature not found on the Yamaha FZ-07 for example – perhaps the GSX-S750’s closest natural competitor.

Here in North America someone decided we couldn’t be trusted with actual power output numbers, and so we have to look at overseas models to get an idea of the readings (yes, powers that be, the internet exists – we can look at international information now).

On that front, the Suzuki lands some heavy blows.

Its 105 hp, 59 lb-ft, 749cc inline-four overpowers the 689cc Yamaha inline twin’s 75 hp and 50-lb-ft – or so you might think. The truth is, at 213 kg the GSX-S is a little too heavy to really make use of that engine power. A relatively long wheelbase of 1,450 mm gives it a composed, confidence-inspiring stance but tames that brutish engine. 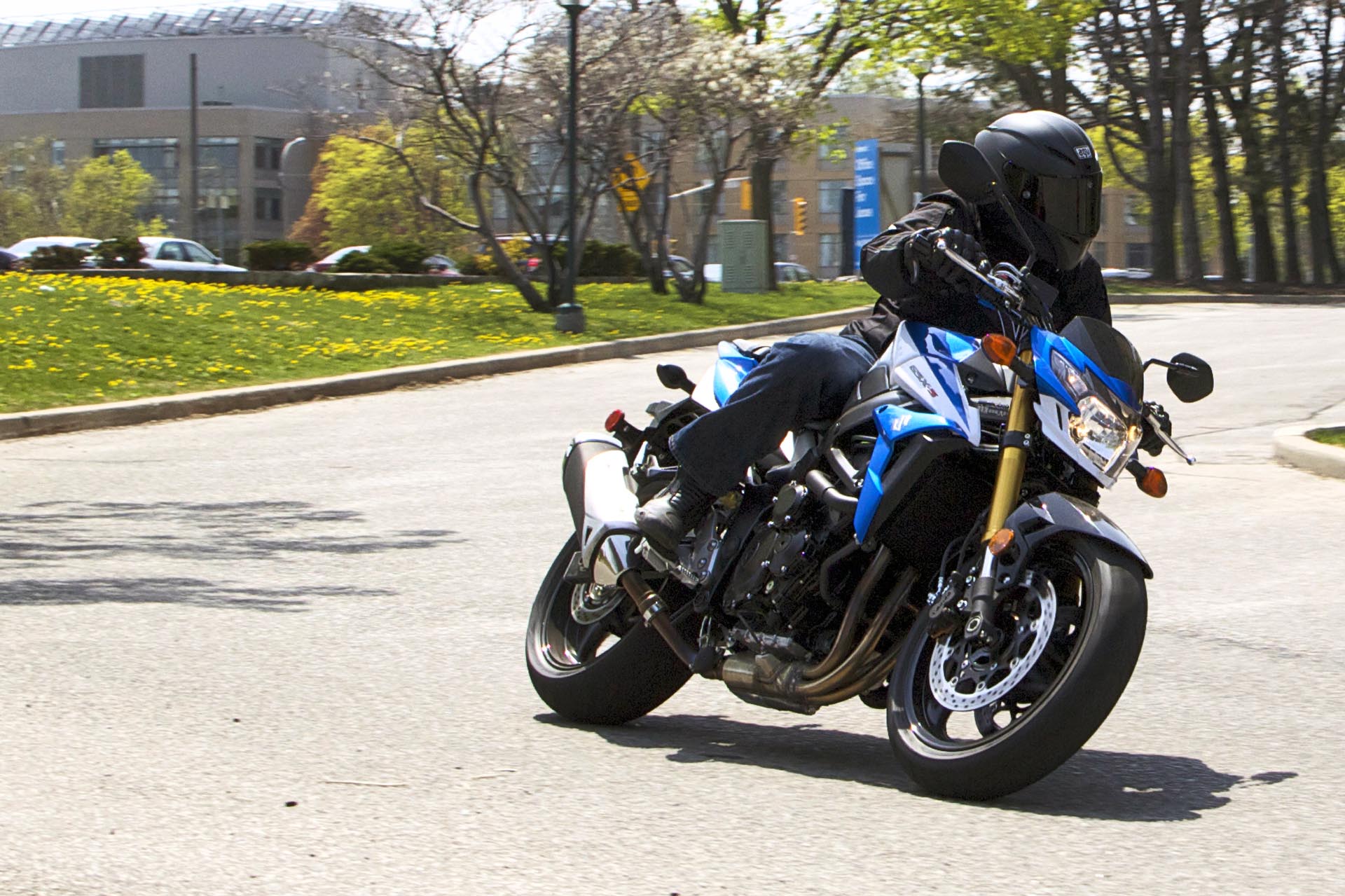 This then, is more “sporty standard” then “naked sports bike” – and that’s okay. Suzuki doesn’t muck around trying to define this bike as a sport bike. Go to their website, and it’s listed under “standard”. This isn’t a bike for poseurs trying to look tough and bust mad wheelies, this is a bike for people who want a genuinely comfortable and capable bike with a little bit of “get up and bugger off” when it’s called for.

Perhaps oversaturated by aggressive marketing claims and overwrought performance claims by others, I was caught off guard by the simple intent of this Suzuki. On on-ramps it did as required with no theatrics or histrionics, off the line it launched without a hint of police-provoking lift. The ride was comfortable too, smoothing out the roads and helping me come to terms with the new patchwork of busted asphalt spring has unveiled for us.

Despite only running two-piston calipers, braking feel was solid, and ergonomically the GSX-S750 is flawless. I appreciated the large tach and digital instrument cluster with gear position indicator and fuel gauge. The economy readout was handy too, but I couldn’t switch it to L/100 km – only km/L. My average of 16.2 works out to about 6.2 L/100 km for the week.

Two-up riding is equally composed and comfortable, my pillions reported good comfort and a sense of overall stability aboard the bike. I longed for a remote preload adjuster and ended up leaving preload alone - this may be frustrating if you like setting the spring for the extra weight out the back. Once again though, the word of the week was “composure”. 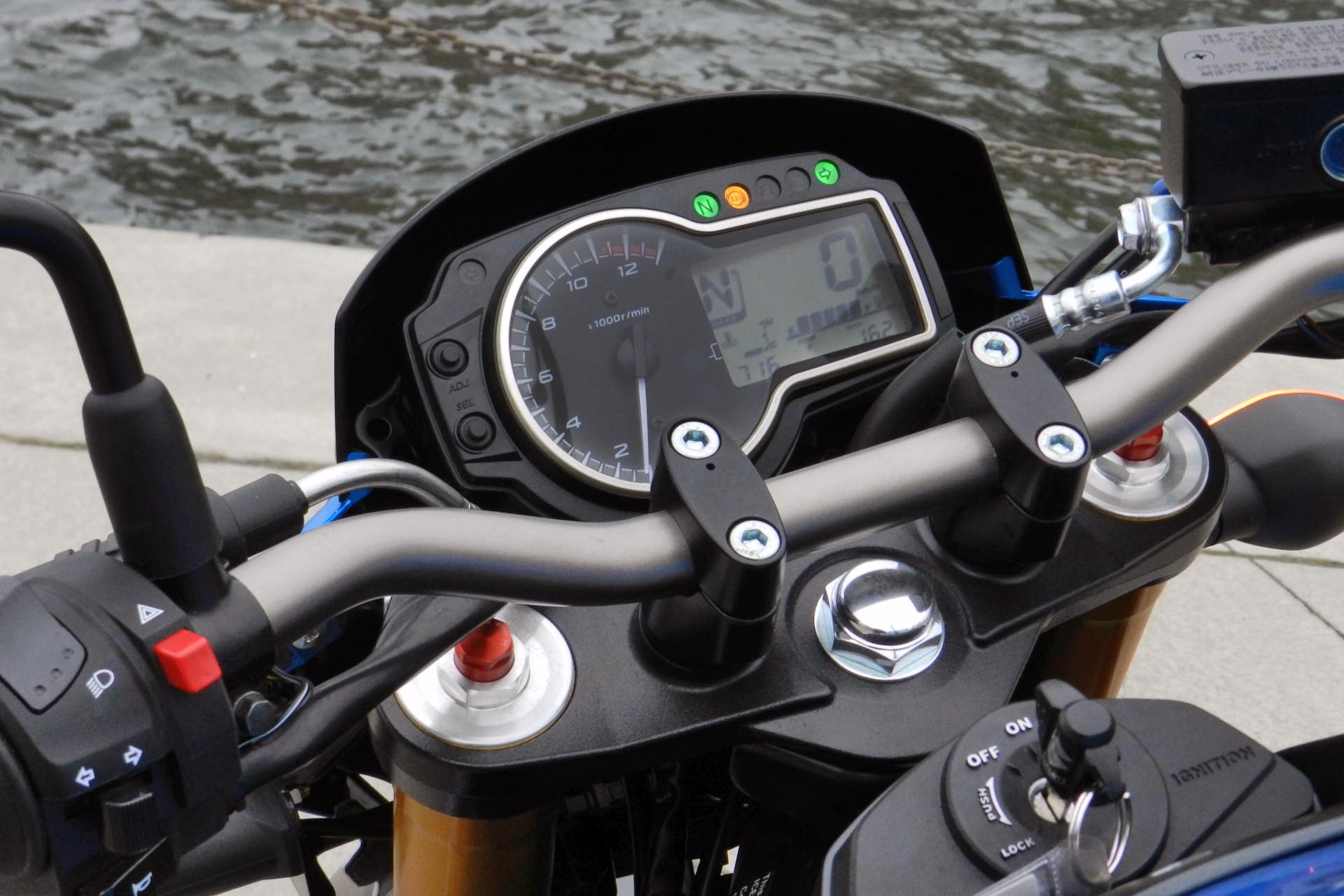 The composure of a larger, lazier bike is a boon when a bike is your daily mode of transport – as it is for many in Europe, Australia, America and Asia – but I wonder if Suzuki had been better off bringing something more savage to a country where winter is king and the riding season is an opportunity to get playful more than anything else?

Or, have they struck a sweet spot, providing affordable, comfortable and yet capable motorcycling to a segment of the market bored of youthful shenanigans – a group who just want to ride, who believe in the “pace” more than the “race”?

For comparison’s sake, the Yamaha FZ-07 is $7,299. The Suzuki is priced to match, at $7,999 for the black one and $8,149 for the multi-coloured GSX-S750. For that money you get more displacement, more size and more comfort.  This then, might be the more mature option in this burgeoning segment.