Dad has inspected virtually every test car I’ve ever driven, and he has a saying when he runs into something extra lavish, unreasonably posh, or over the top where luxury equipment is concerned.

“When does it stop?!” Dad says, often, and typically while checking out a high-dollar ride with a feature or two that makes us common folks shake their heads.

There are, of course, numerous reasons automakers equip their big-buck rides with features that the rest of us find a bit much.

First, many top-line models serve as a gene-pool for features, design and tech from which future, more-affordable models will draw. Once upon a time, power windows, automatic transmissions and forward collision warning systems were only found in big-dollar luxury cars. Back then, people probably shook their heads, too.

Second, some shoppers just can’t spend enough money. If a car costs $120,000, they want to drive the price to $140,000. If there’s a $10,000 option package, they want a $15,000 option package on top of that. Spending more and more is the way it goes. I once had an off-the-record chat with an executive of a luxury automaker, and he told me that they almost couldn’t invent high-dollar add-ons fast enough to satisfy the demands of this type of shopper. He also told me that some shoppers won’t buy a ‘mainstream’ luxury flagship at $150,000, because they’d see too many of them around – and they’d just opt for the $300,000 Bentley instead, assuming there wouldn’t be three of them parked in the same campus lot on Saturday afternoon. 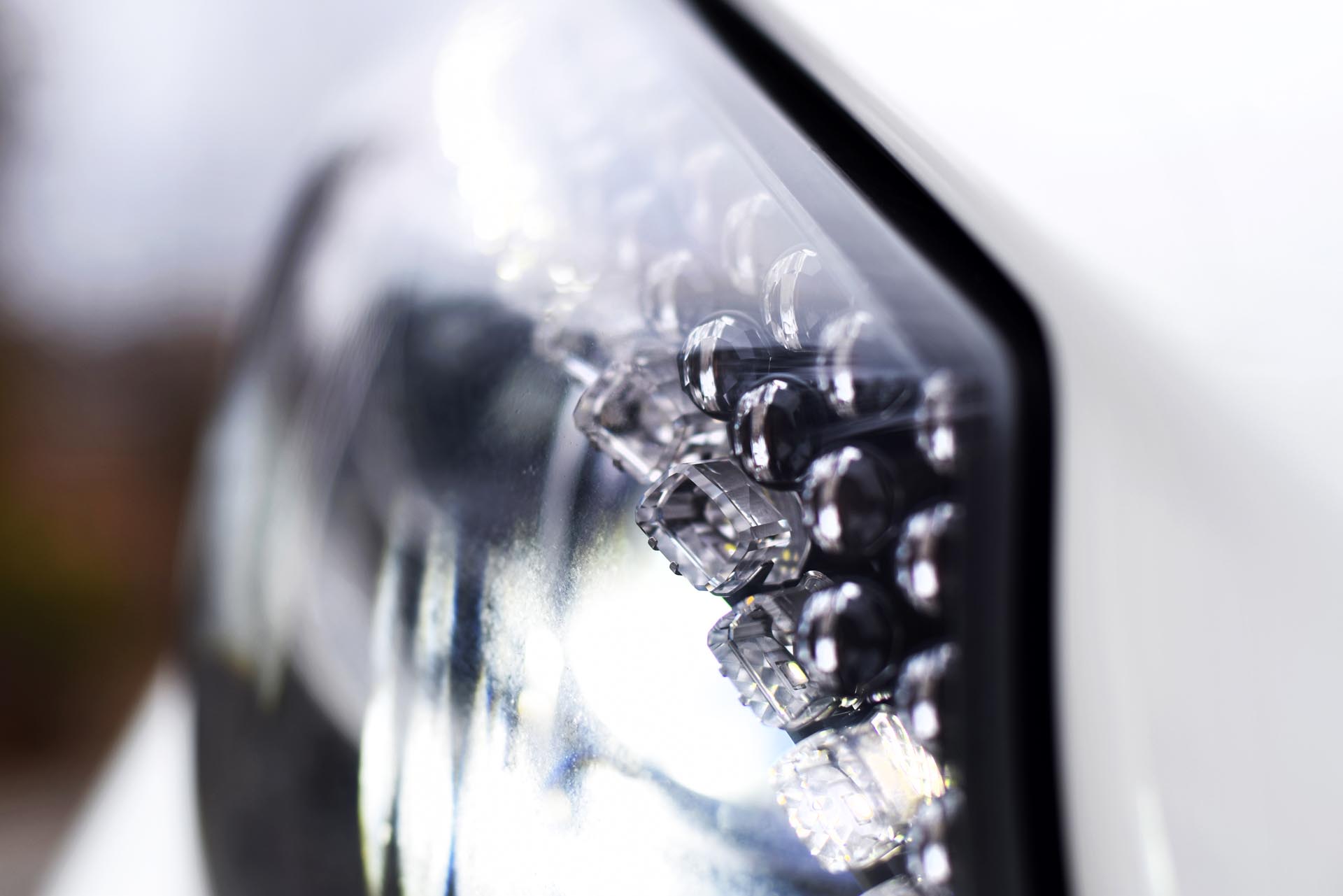 The S550 Coupe is the most lavish vehicle your writer has ever visited, and beneath the glitz, glamour and miles of leather and wood, this machine seeks to draw signature elements of the shopper’s luxury lifestyle into their motoring world. Cross-branding is one way how. Case in point? Drop $4,500, and they’ll fit your S550 Coupe with dozens of little Swarovski crystals to cap the LED lights in the headlamp assembly, giving the machine a shimmering after-dark lighting signature, added exclusivity, and even more detail to admire on close-up inspection of its body. 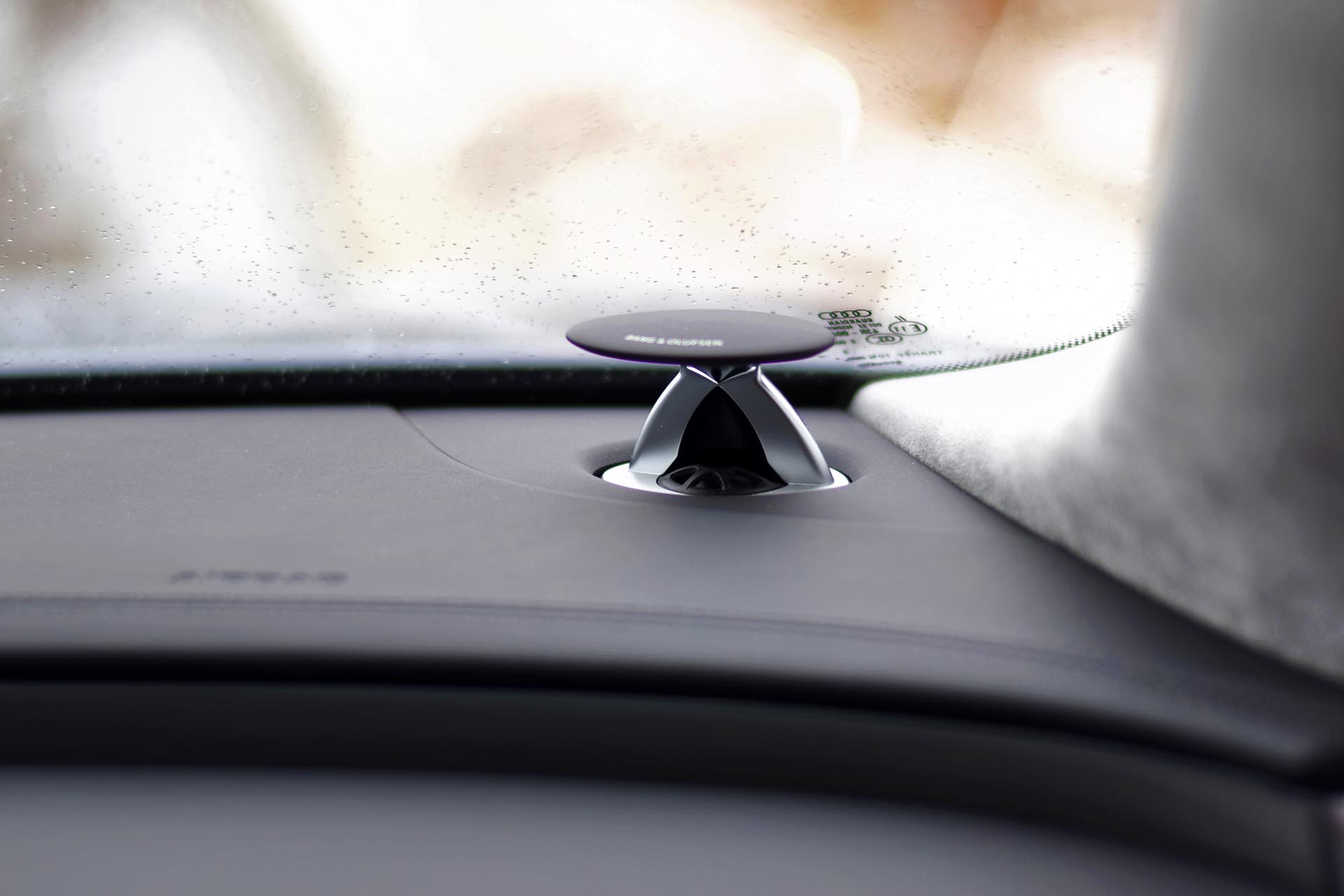 Start up the A8, and there’s a sense of theatre as the navigation screen sprouts out in sync with the satellite-shaped tweeters that erect from the dash with a creamy smooth motorized action. If you’ve opted for the big-dollar, big-power Bang & Olufsen stereo, these pop-up tweeters serve as a conversation starter, and signal the start of a world-class listening experience that’s on perpetual standby. Over the top, yes – but totally fitting of this magnificent stereo. Few in a car I’ve ever heard are more vivid, clear and vibrant. That’s to be expected, though, as this listening experience commands a $7,000 premium for its 19 speakers and associated components. 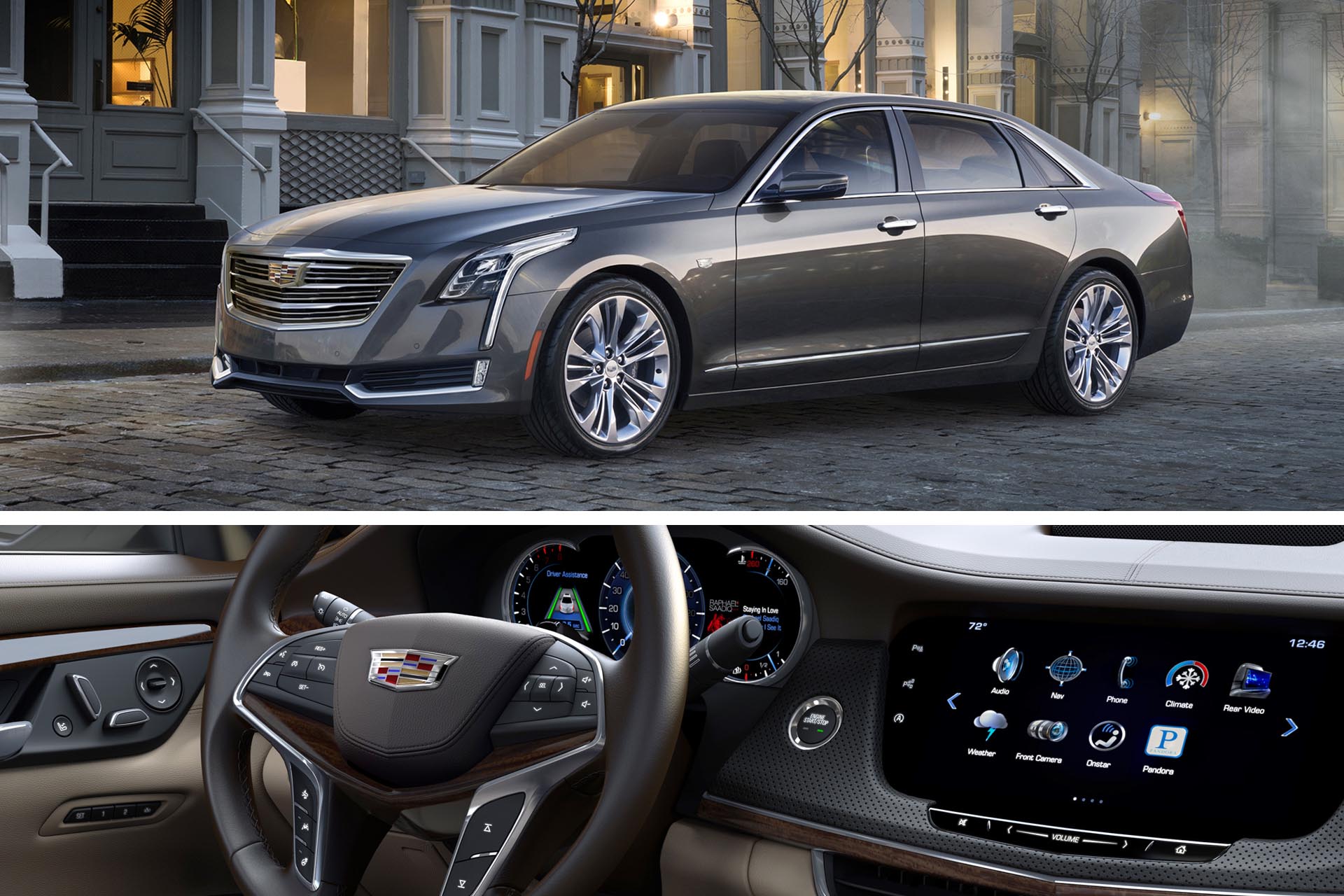 While we’re on the topic of listening, the optional stereo in the upcoming Cadillac CT6 flagship begs the question: how many speakers is enough? Most cars make due with four or six. Some big stereo systems have eight speakers, or even ten. The best car stereos I’ve ever feasted my eardrums on usually have about 15. Maybe 20, absolute max. The new Bose Panaray stereo, which will debut in the lightweight CT6 flagship, has 34. Thirty. Four. Speakers. That seems more than a little ridiculous, and I can’t wait to hear it. 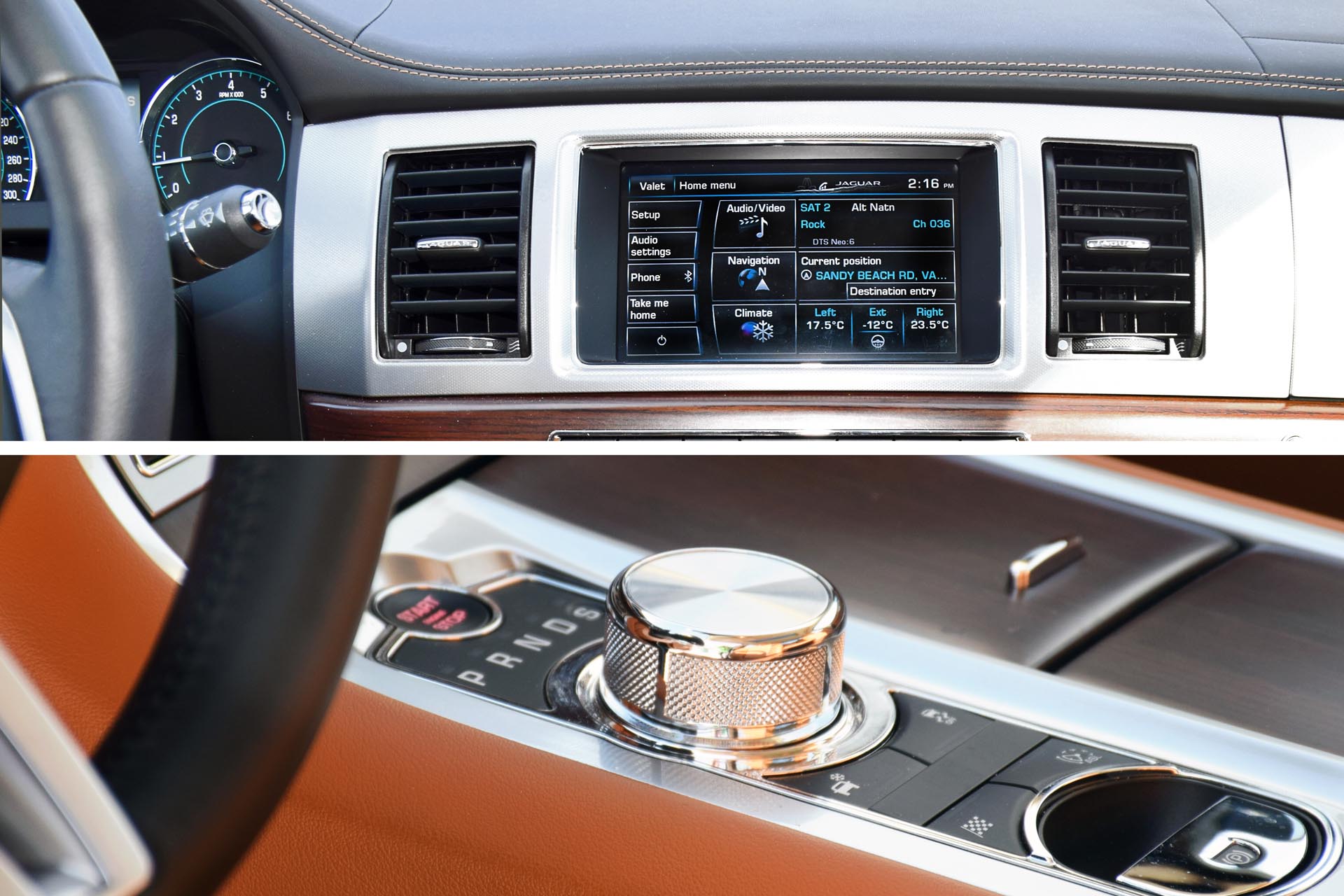 A great example of a minor but very impactful touch. Start the Jaguar XF via its push-button start, which itself pulsates via a backlit red LED like a beating heart, and the round shifter dial rises slowly from the console in sync with the barrel-shaped air vents rolling open in the dash. There’s no functional benefit to this flourish, but it’s a uniquely potent signature touch that adds a little exclusivity and reinforces the XF’s luxury atmosphere. 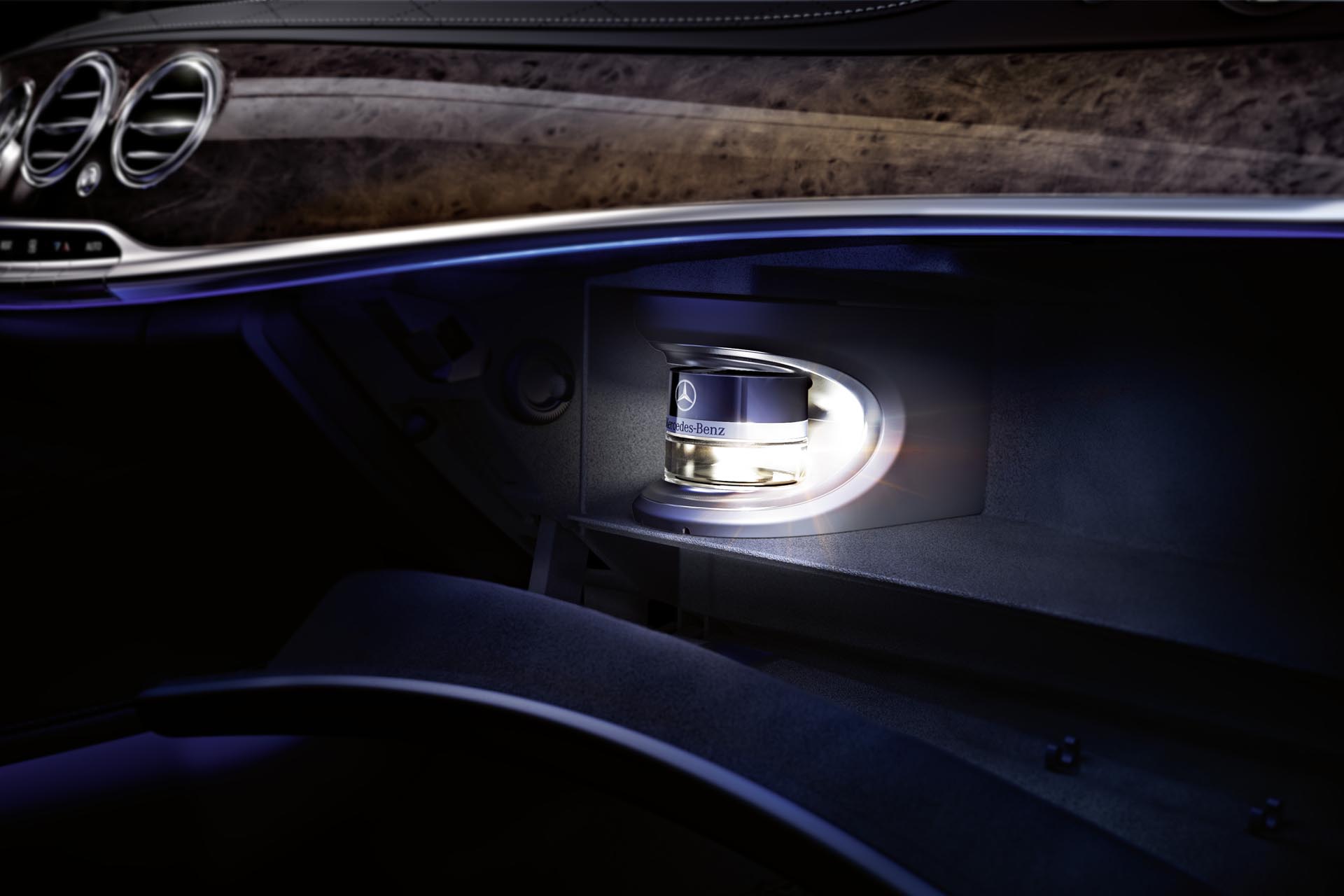 We’re back on this machine, again. Here’s another bit of over-the-top: load a glass jar full of scented liquid, available in several olfactory themes, into a receptacle in the glovebox. Then go into the climate-control menu to set the air freshener setting you like, and forget it. After telling the system when and how much of the scent you care for, it occasionally wafts luxurious little puffs through the climate control vents, ensuring the cabin of the S550 always smells like the lobby of the Shangri La. Here’s that luxury lifestyle cross-branding again, this time, right down to the way the S550 Coupe smells. 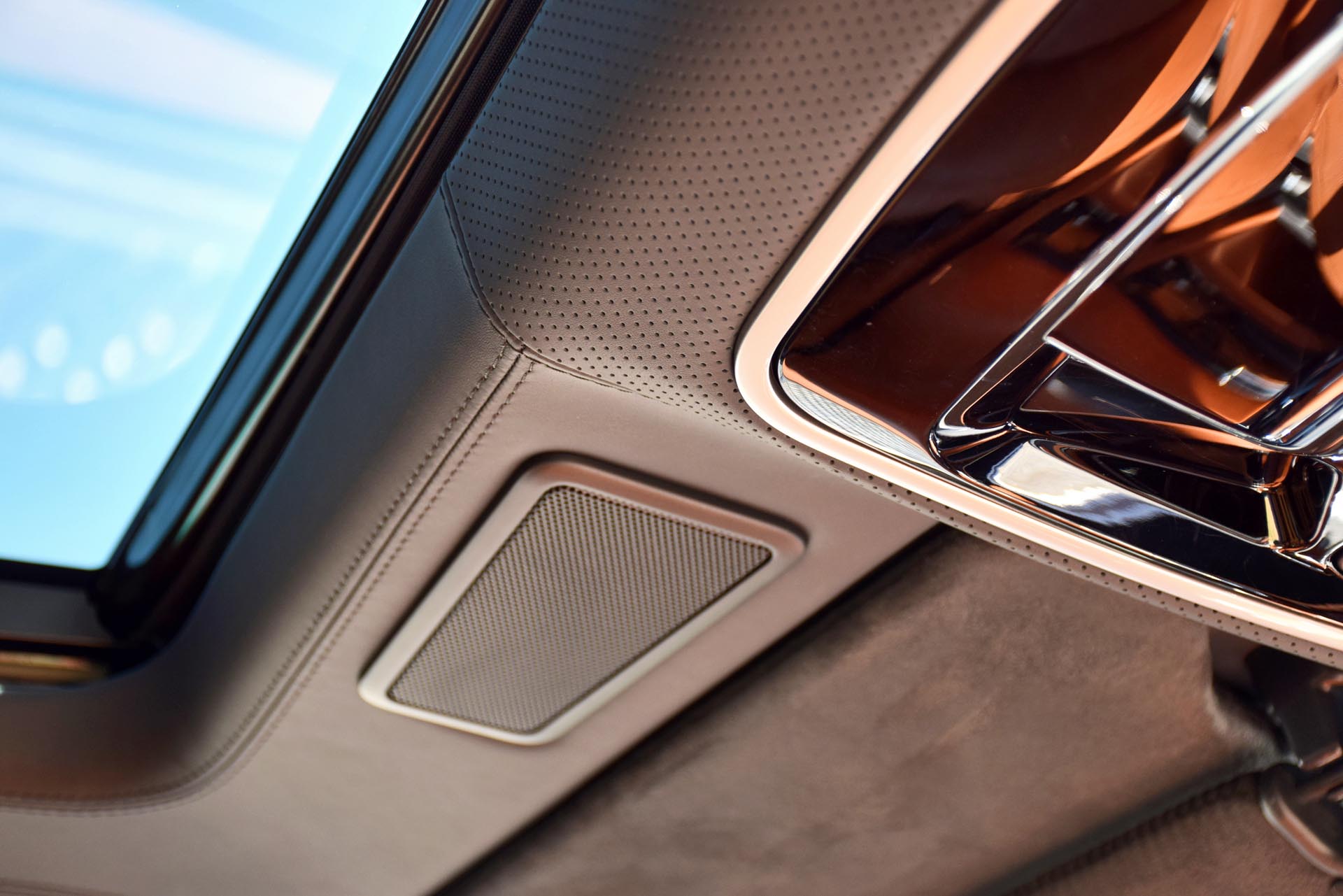 Nobody does leather like Land Rover, and a recently tested top-dog Autobiography, extended-wheelbase flagship version of this classy off-roader came with the most luxurious ceiling I’ve ever seen. Yes, ceiling. Most ceilings in mainstream cars are finished in low-grade, felt-like fuzz, some sort of nylon mesh fabric, or even dollar-store grade vinyl – but not here, in the Queens off-roader of choice. The ceiling in the Range Rover Autobiography is made of gorgeous, smooth, creamy leather, with flat and perforated panels intersecting around the grab handles, ceiling mounted speakers and interior lighting provisions for an extra layer of detail and sophistication. It’s wrapped right to the very edges of the Range Rover’s ceiling liner, and it’s not the cheap leather either: it’s smooth as velvet and smells glorious. 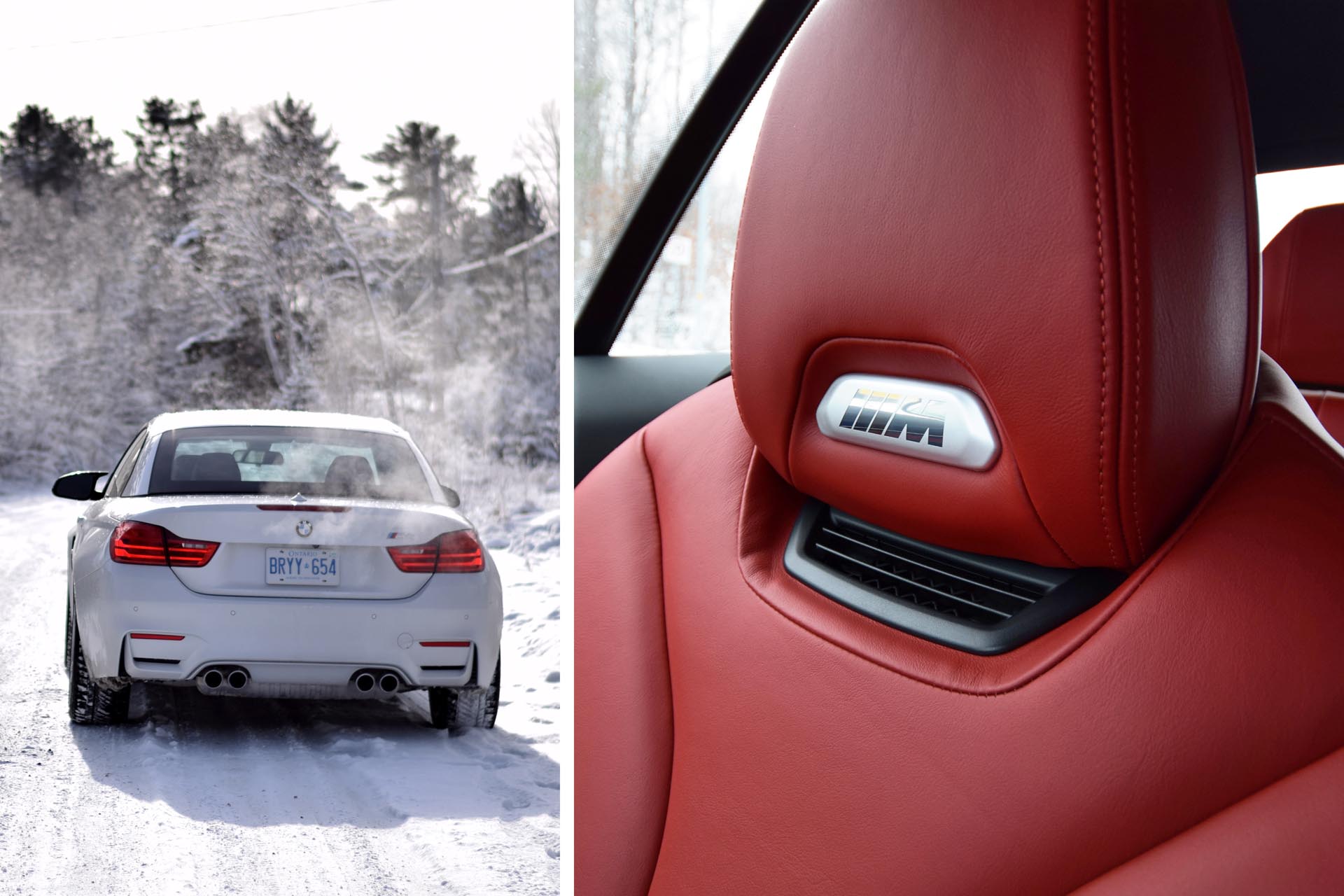 The M4 isn’t the first or only car to offer a neck-warmer vent, but on a recent winter test drive of this German hot-rod, your writer appreciated the ability to have hot air pumped around his neck and down his back and sides, at the touch of a button. The built-in heaters are electric, meaning they start heating you before the engine is warm. Here’s a lavish touch that’s highly functional, too. 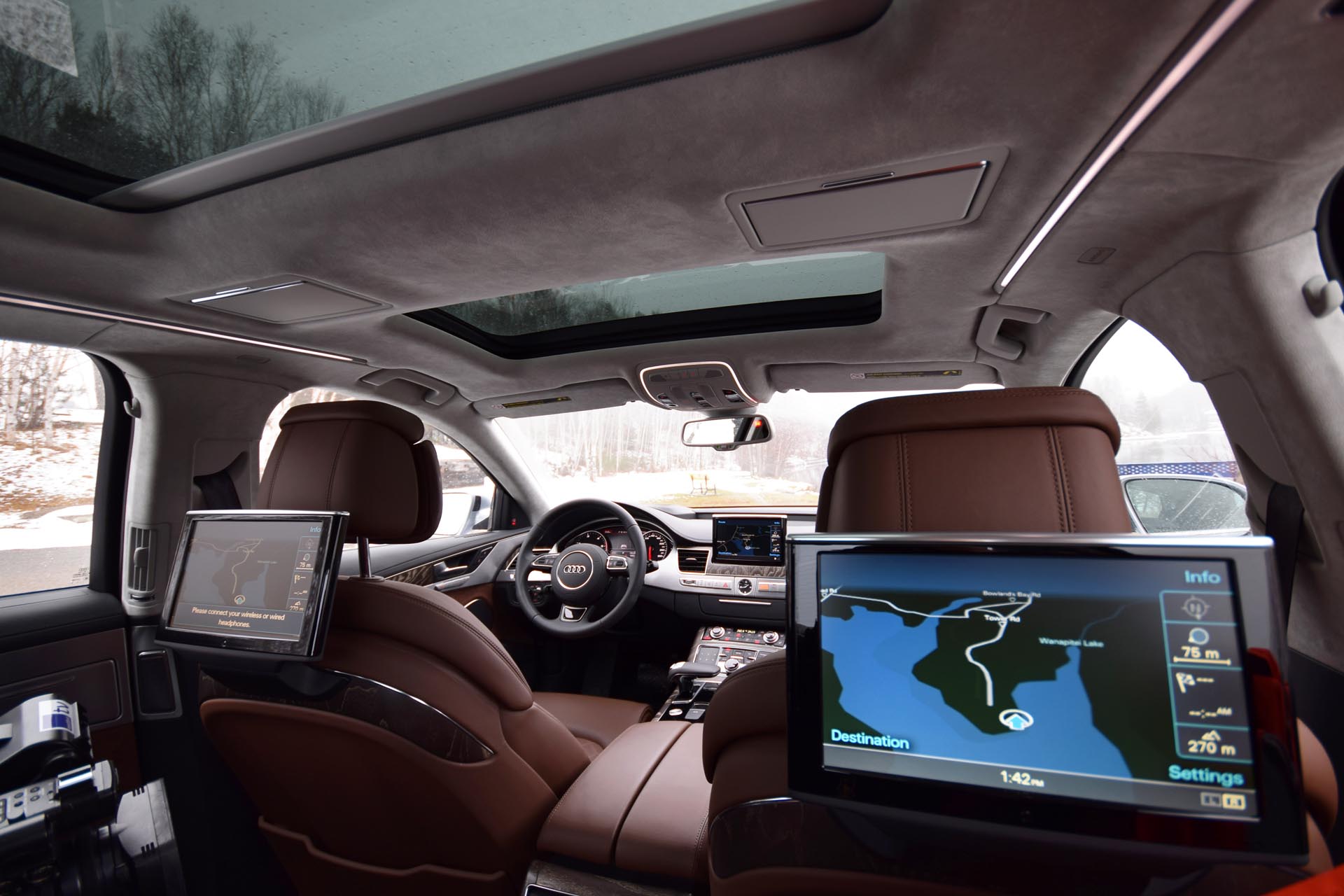 Massaging front seats in a flagship sedan aren’t incredibly uncommon, though massaging rear seats are an extra luxurious touch that’s fit for royalty. In the A8 L, these are a $4,250 option available only if you’ve already added the $3,900 Package and the $2,100 Front Seat Comfort Package. The A8 L has an extended wheelbase, with the extra length almost entirely used for increased rear-seat legroom, so you can travel like a dignitary. This particular tester also had rear seat TVs, rear-seat climate controls, and even a rear-seat navigation controller that could be used to send directions to your driver up front. All of that while rear seat passengers lounge, cross-legged, while enjoying a massage from behind their motorized pop-up privacy screens. This might be the most luxurious back seat ever made. 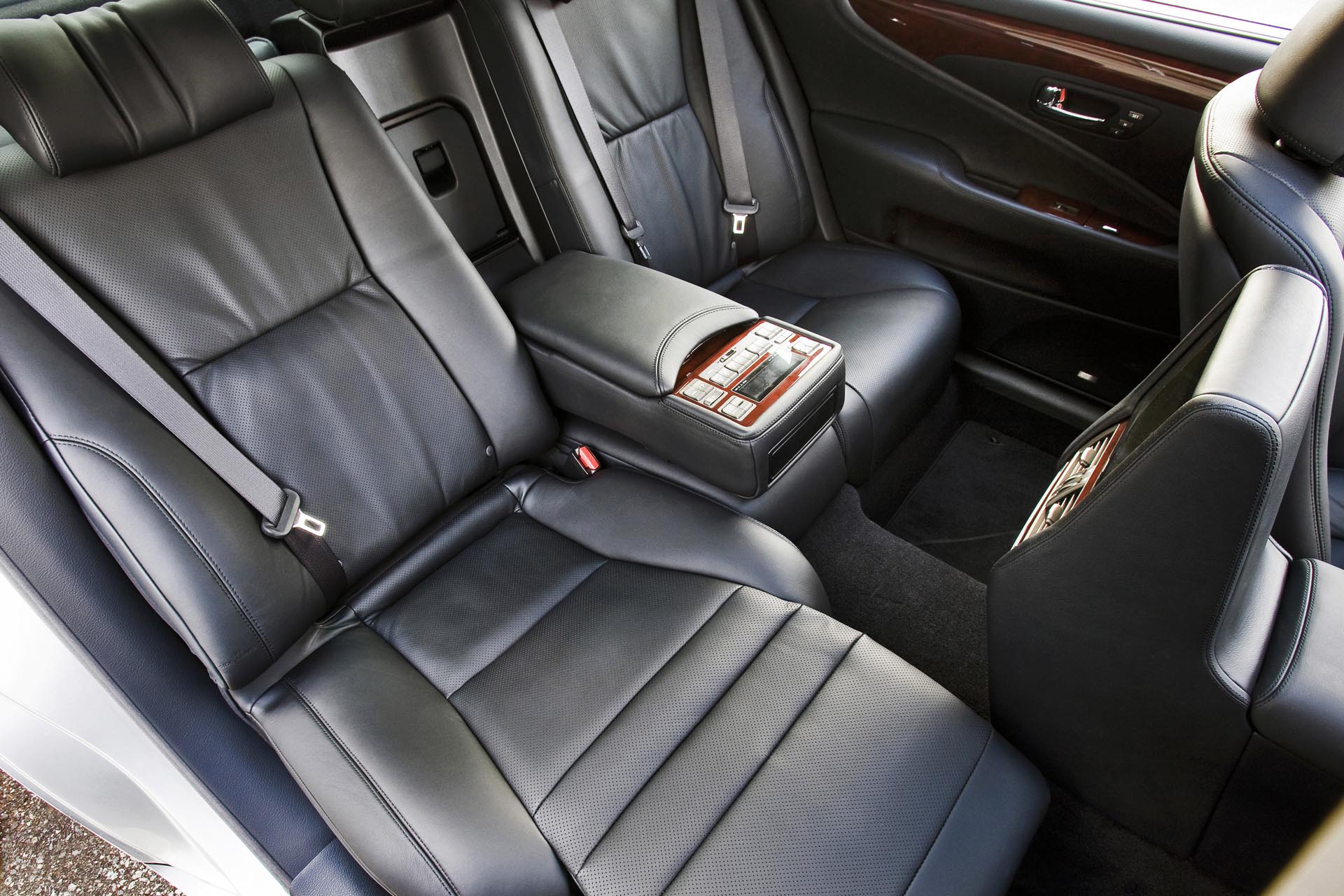 Or maybe this is the most luxurious back seat ever made? If there’s ever been a car built more for you to enjoy while someone else drives you around to do your rich-guy stuff, I’m not sure what it is. While sitting on the rear passenger side of this gigantic Lexus with the front passenger seat pushed forward, passengers can recline and put their feet up on an ottoman while receiving a massage through the seat. The rest of us peasants have to put a buck into the questionable-smelling massage chairs in the mall for this sort of experience. 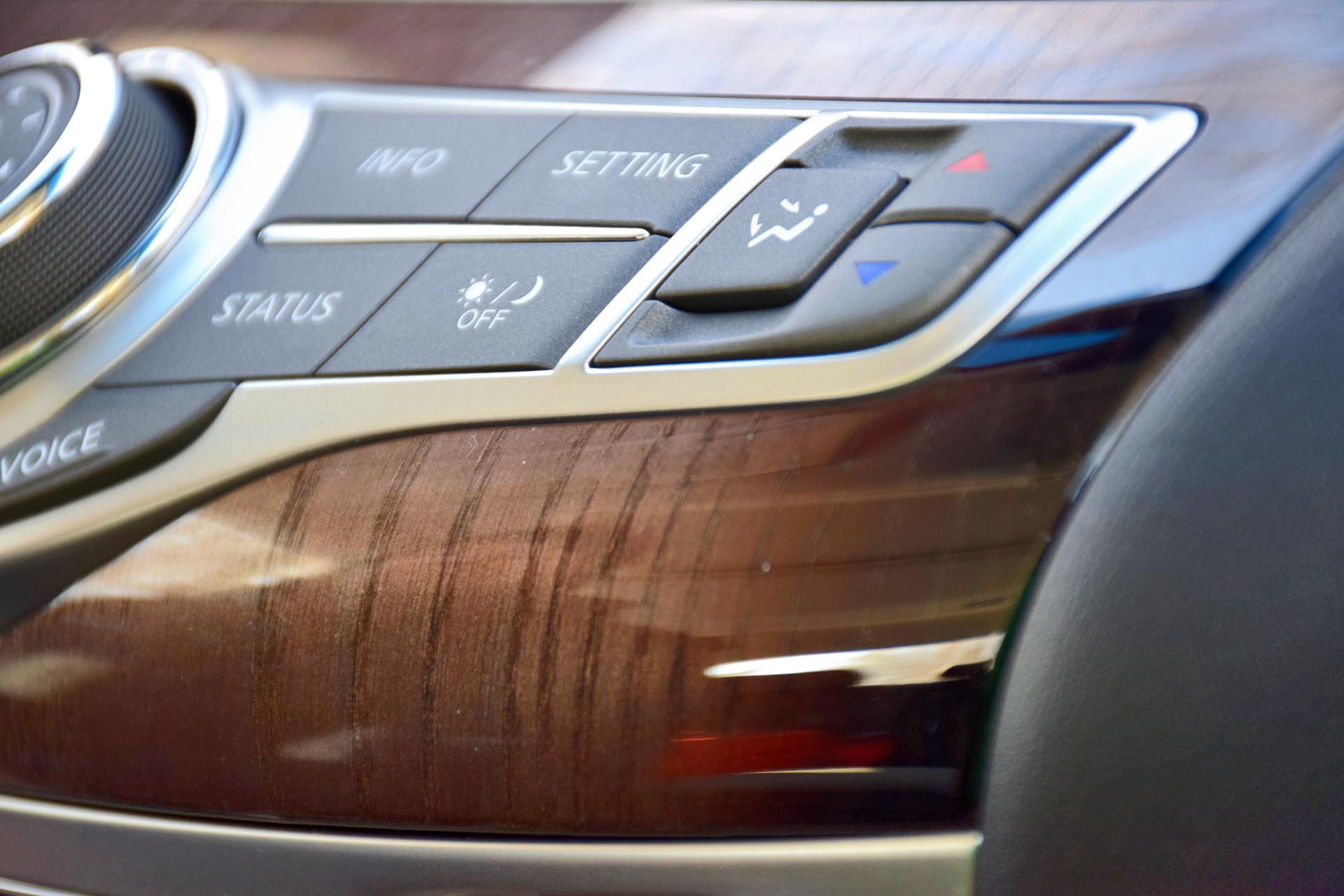 How’s this for posh: the gorgeous, lustrous wood trim in the Infiniti Q70 takes on a signature sheen because of how it’s treated before it is lacquered. This flagship model from Infiniti isn’t as expensive as you think, and with wood trim that’s powdered with silver dust and hand-polished before being sealed, the interior gets a subtle but intensely unique styling element. This helps the Q70 and Q70L hit harder than its price tag suggests. 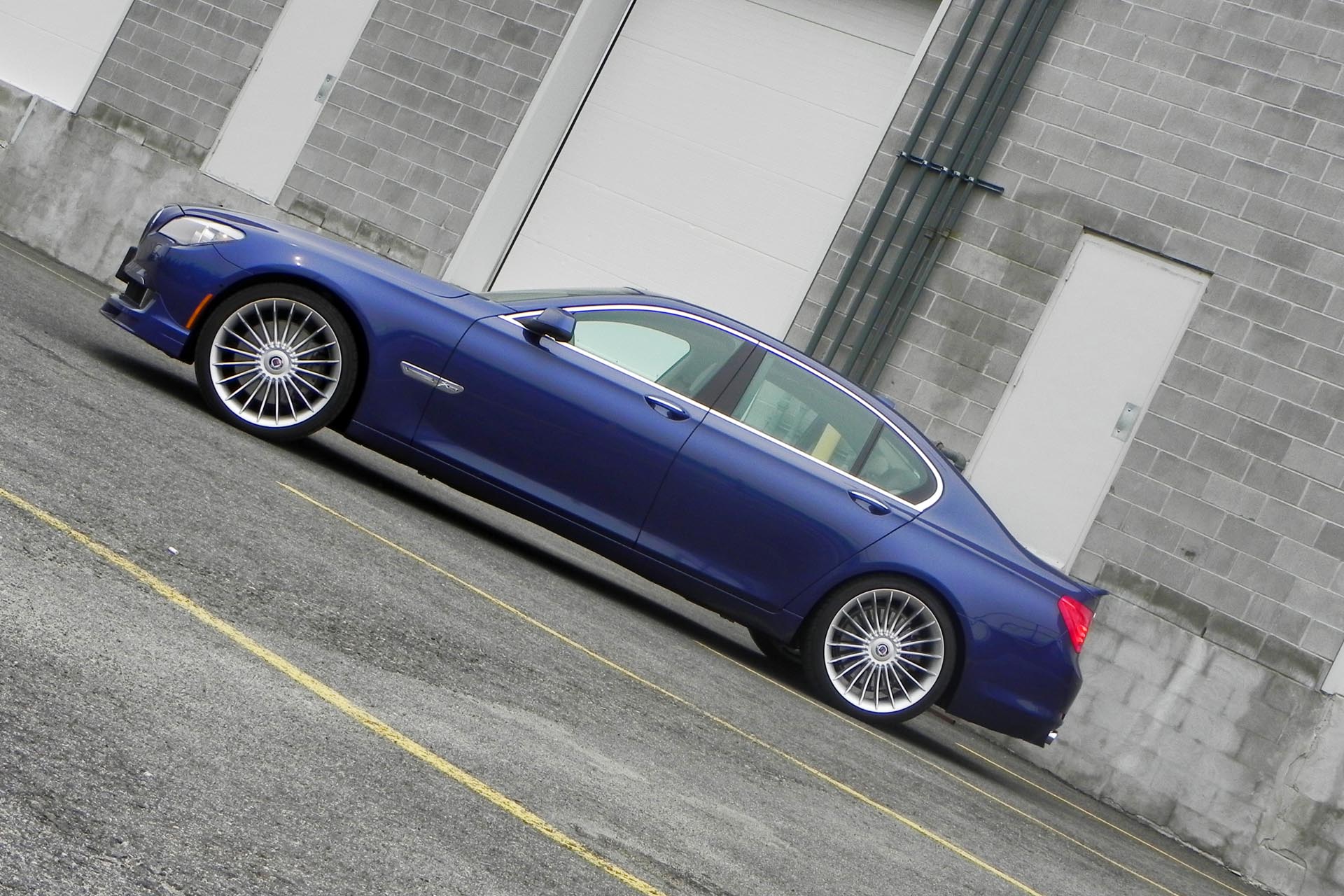 Because slamming doors is for simpletons. This feature is common across numerous high-end brands, including the 7 Series, and delights every time I see it. Simply touch the door to its latch point, as gently as you like, and the system pulls it shut and seals it for you, in complete silence. This is a conversation starter to be sure, and a great way to sneak silently into the house at 3am without alerting the dog, or the wife, that you’re arriving late with a loud door-slam in the night.