“If I could please have a moment.”

The voice came first from the back of the room, and was then echoed from the front, where an interpreter held a small microphone before our group of journalists. We collectively turn to the row of seats at the rear of the presentation hall at Mine Proving Grounds, one hour north of Hiroshima, and see a man standing formal, back straight, with close-cropped hair and wearing an olive-green flight jacket with 'T. Kunikata' emblazoned across the left breast. He smiles at us.

“All my life I have driven rotary cars,” he says, his words clarified by the soft voice of the translator. “I will drive rotary forever. For me, there is nothing better. Thank you for coming here today to be with us and understanding the pleasure of rotary driving.”

The smile remains, but the man's face belies the seriousness of his sentiments as he nods slowly and sits down in his assigned chair. Such is Japan, where the owner of one of the fleet of Mazda Cosmo Sports that sat on pit lane just outside the building would thank us, rather than the other way around, for the pleasure of lapping the Mine circuit behind the wheel of his own automobile.

A Passion for Rotary Power 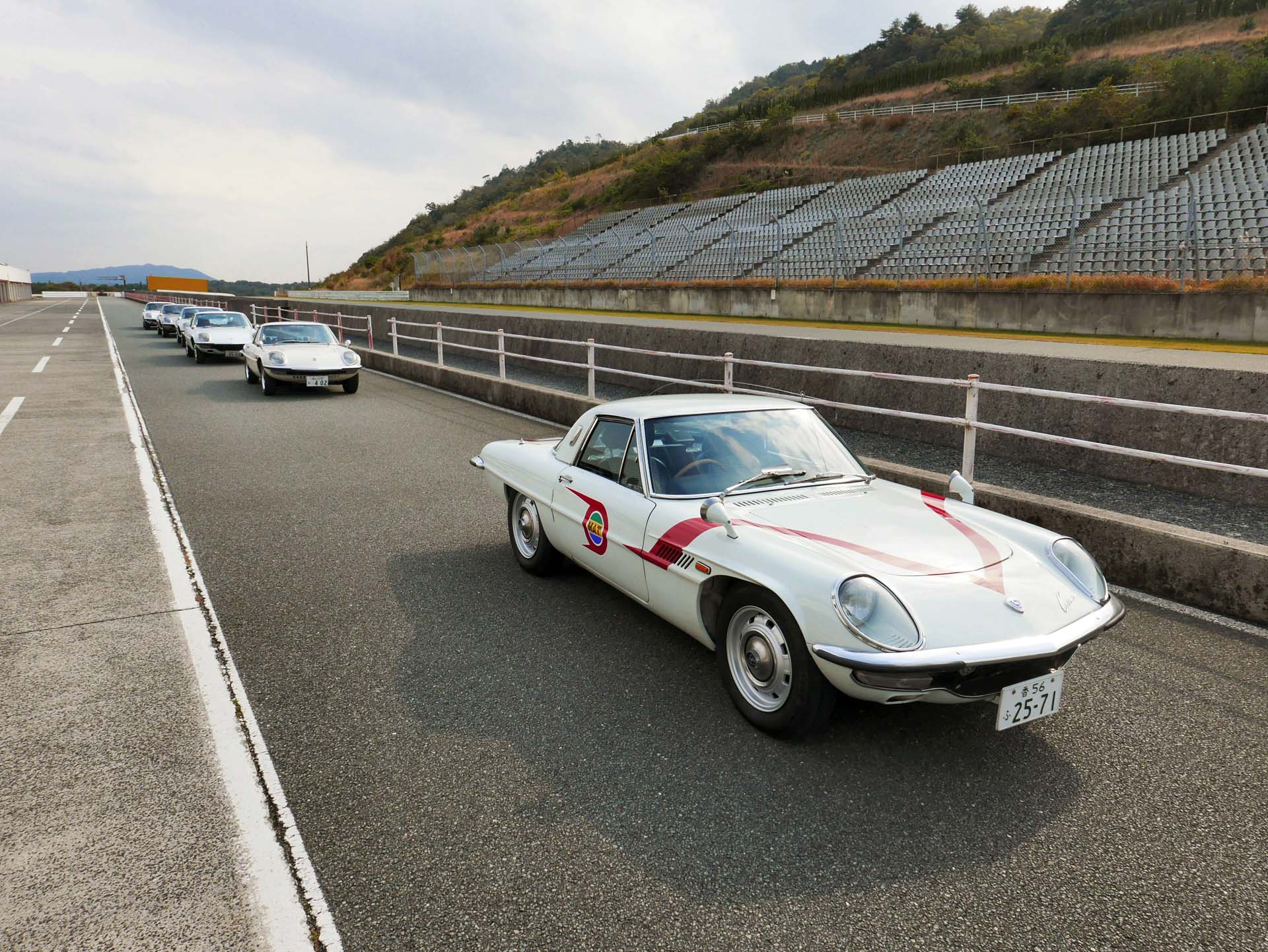 I had met Kunikata-san just before our briefing at Mazda's flagship performance testing facility. It was hard not to be immediately drawn to the man: not only was he wearing an outfit emblazoned with his name and his affiliation to the Cosmo Sport Owner's Club (of which he is the secretary), but he also happened to possess the most distinctive version of the car we had come to drive. Featuring a bright red V stripe that traveled from the centre of the coupe's hood all the way down to the door on each side, his Cosmo was modeled after the MAT (Monster Attack Team) vehicle from the Ultraman series, a Japanese superhero staple that had first caught Kunikata's eye as a child. It was only natural, he told me, that he would one day acquire his own Cosmo Sport and adorn it with just the right accessories to match the on-screen Mazda, whip-antennae and all.

Only natural. Which I can understand, having myself been smitten by movie rides as diverse as ECTO-1 and Bullit's Mustang fastback during the course of my formative years. But then, Kunikata pulls out a diecast MAT and presents it to me with one of his trademark serious smiles… and then another, forcing it into my hands despite my protestations. Gathering steam, he continues, somehow producing several larger-scale models of both MAT and the standard Cosmo Sport, placing them lovingly on the table between us before taking them out of their elaborate packaging to show them to me in detail and compare them to his car.

Eventually putting down his toys, he brings up the Mazda RX-Vision Concept, which had been unveiled at the Tokyo Motor Show the day before. I ask him if he thought Mazda would build it, and he tells me that he had already informed the company that when they did, he would buy the very first one off of the production line. I raise an inquisitive eyebrow, but Kunikata is not deterred.

“Several years ago I was at a very similar event here at Mine,” he tells me, gesturing to the line of Cosmos waiting for us just beside the pit wall. “It was for a car called the RX-8. I told Mazda the same thing: I will buy the first one that you build.”

He tugs at my shoulder and turns, pointing towards the track's parking lot. My eyes following his arm to a red Mazda sitting by itself, carefully guarded against door dings and the potential carelessness of other drivers.

“It's sitting right there,” he finishes triumphantly.

Once In a Lifetime 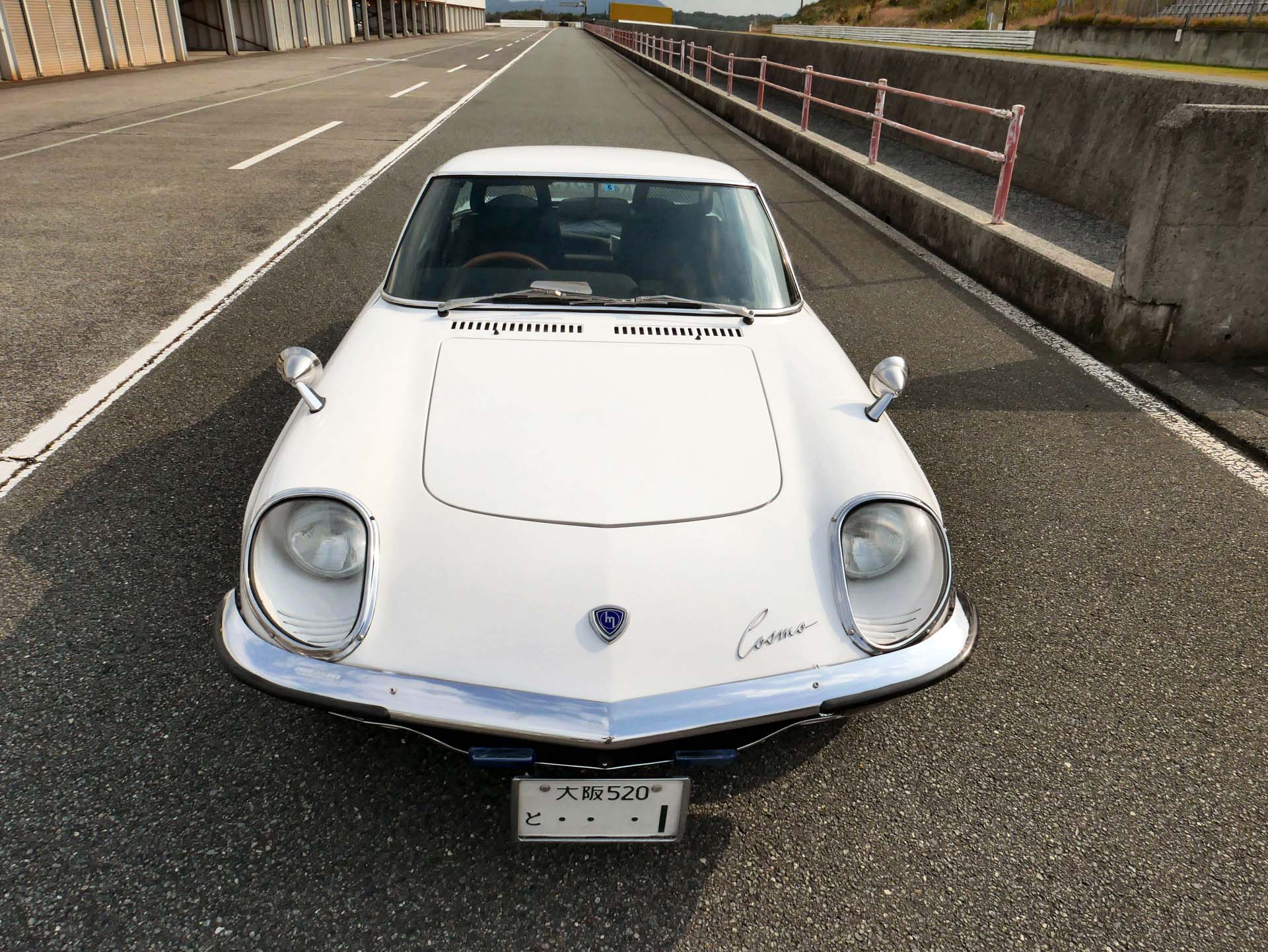 Kunikata-san might have been the most resplendent member of the local chapter of the Cosmo Sport Owners Club to meet with us that afternoon in Japan, but he was far from the only one. There were just under 10 of the rare Cosmo Sport coupes available for us to drive, ranging from the initial 1967 model year all the way to the 1972 edition that book-ended the first generation of production. Each of the vehicles – like their proud caretakers – showed evidence of a distinct personality, with no two exactly alike although their respective departures from stock were minimal compared to the stylistic extremes Japan is famous for.

I slide into the cockpit of the Cosmo Sport with the angular grace required of cars built around their mission statement, rather than anything resembling ergonomics. Once inside, I'm confronted by the Mazda's wide steering wheel, which is perched just above my lap, and which of course cannot be adjusted through any plane. The pedal box, too, is unusually slanted, what with the clutch set far to the left near the transmission tunnel and both my feet splayed out to port to compensate. Ahead of me sits a tachometer that goes all the way to 9,000 rpm, along with a bevy of easy-to-read gauges and switchgear that belie the simplicity of the car's 60s-era design.

With a simple turn of the key the Cosmo Sport starts up immediately and thrums its rapidly whirring song with nary a hint of hesitation as I watch it slowly come up to temperature. I'm allowed one lap around Mine, a single circuit to get a feel for this rarest of rides, a coupe I know I'll never have another opportunity to pilot, and a car I most certainly want to take the utmost care with during our time together. Kunikata and the others don't hover over us, as I would have had our positions been reversed, but instead watch with a lack of concern that almost borders on disinterest from the waiting area under the pit lane arch. I realize quickly that the reason they are so unworried is that they trust each and every one of us journalists completely, and the burden of the task at hand instantly becomes that much heavier. 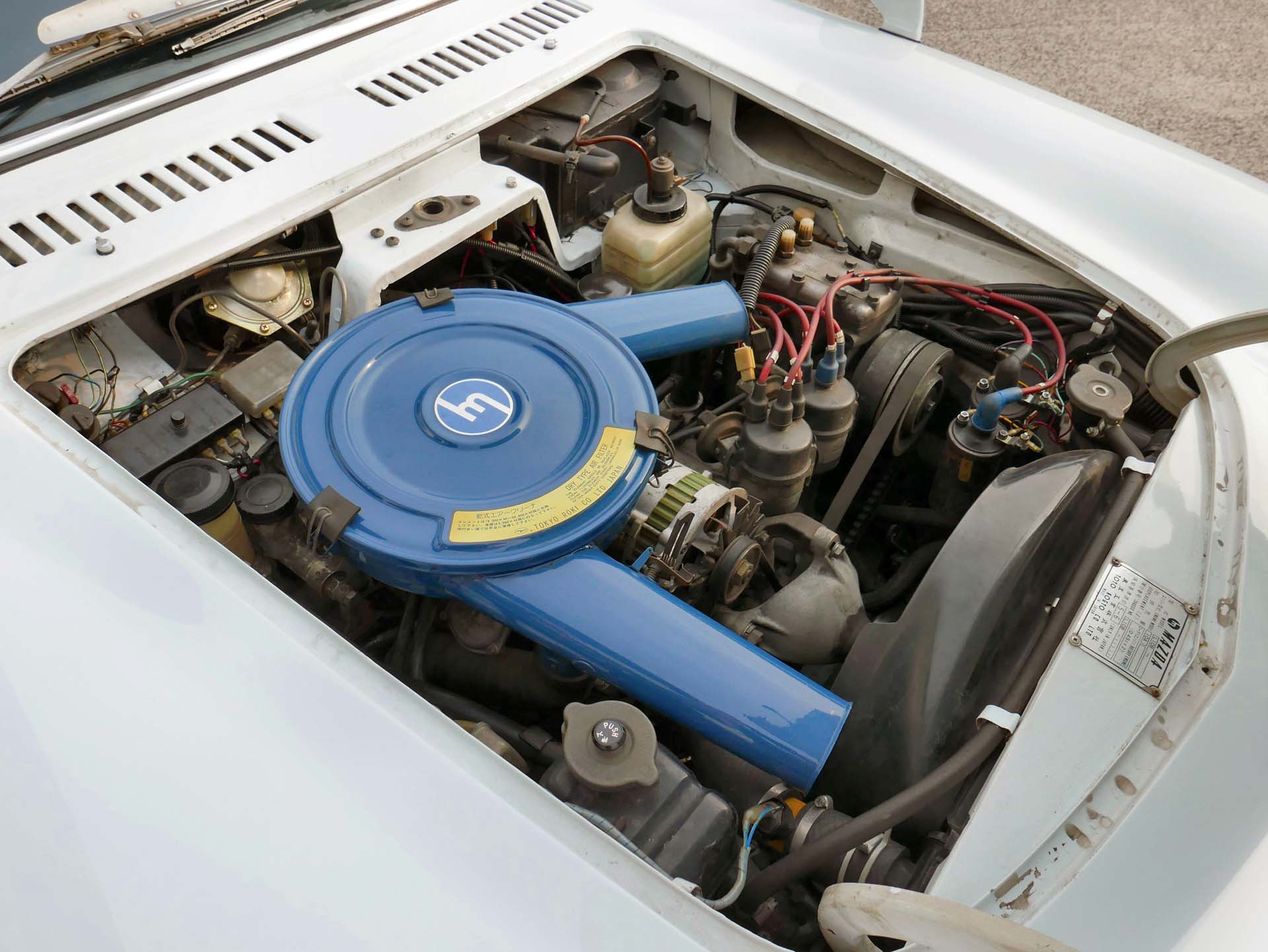 The progressive engagement of the clutch allows me to guide Mazda from pit lane to Mine's front straight without any embarrassing lurches or stalls, but it's not until after I take the first right-hander that I feel comfortable enough behind the wheel to wind out the 1.0L, 130-hp rotary connected to the car's accelerator pedal. Suddenly the Cosmo Sport comes alive, transforming from elegantly-styled 60s time capsule to road-going rocket. Power continues to build, build, build, until I shift into third gear at 100 km/h and realize that I've run out of room before the next bend. Easing onto the brakes, the lightweight Mazda slows predictably and without panic, and that same low-mass chassis makes negotiating the upcoming set of esses an absolute pleasure.

I've been let down by my heroes before – especially those who hail from an era when suspension design and braking power were often secondary to sheet metal, chrome, and horsepower – but the Cosmo Sport offers no such betrayal, instead offering fluid passage through Mine's serpentine contours at speeds I would not have thought possible from simply looking at the Mazda's spec sheet. Mazda's first rotary-powered sports car not only set the tone for how the successful line of RX models that succeeded it would drive, but it still offers lessons for modern designers today seeking to achieve that delicate, so easily trampled balance between man and machine. 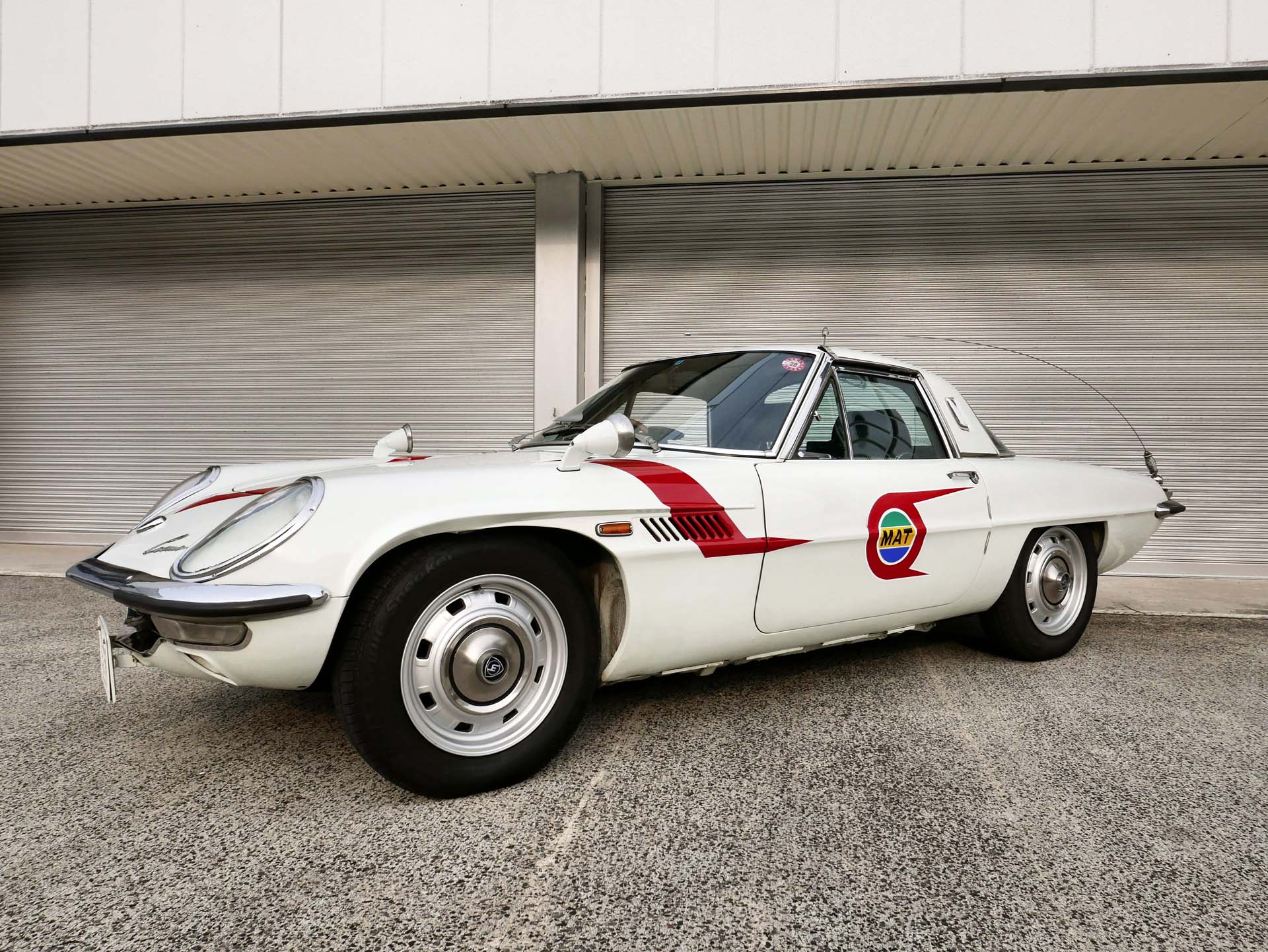 I pull into pit lane and coast the Cosmo the distance between the entrance and its assigned stall. Getting out, an uncontrollable grin plastered on my face, I catch the eye of Kunikata-san and see, for a moment, my own reflection in his contented gaze. Then he disappears inside the control tower, leaving me alone to watch the fleet of Mazdas return to the track in the care of a fresh set of equally-excited drivers.

As the day draws to a close, just before the light begins to fade behind the hills that surround Mine, I find myself standing next to MAT, waiting patiently as Kunikata makes his way across the paddock to join me at his car. Seeing the camera in my hand, he asks me if I want him to wear the Ultraman mask he has brought with him, which he holds against his chest with the earnestness of the boy he had once been, sitting in a darkened theatre watching his matinee idol vanquish the evil forces that threatened Japanese shores.

It's my turn to beam at him, telling him no, that I want it to be him posing beside the car that he has so lovingly taken care of for so many years. Left unsaid is that I want to capture the man that boy became, the person who never wavered from his passion for Mazda's capricious pursuit of the engine that would come to define the entire brand, the individual who would one day see his object of desire transplanted into a prototype racer and capture the overall victory at Le Mans, giving them both bragging rights over every other Japanese automaker whose banner would never know the same glory. He gets down on one knee beside the coupe, insisting on at least one prop to show his dedication to the Cosmo Sport, to the joys of rotary power, to a life led outside the boundaries of what others might have decided was the best and only way to move forward.