It’s a simple fact driving the auto industry towards a collective weight-shedding regimen that’s seeing new cars emerging bigger and lighter than their predecessors: make a vehicle lighter, and you simultaneously improve both its performance and fuel efficiency. It’s all about answering the call of today’s shopper for models that are quicker and easier on fuel, without any penalty. Shoppers want the benefits, but without any compromise to drivability or functionality. They don’t want added costs, either.

So, lightweight materials are moving into the spotlight. For decades, carbon-fibre has been used vigorously in high-performing, high-dollar exotics, where every gram of unwanted weight is neutralized as an enemy of performance. Carbon-fibre is lighter and stronger than steel, plus it’s neato looking, albeit pricey. Still, some amount or another of it is winding up in more and more rides, at lower and lower price points.
Aluminum, also light and strong, has been used in the auto industry for its weight-saving properties for decades, too. Perhaps first with Audi, who created a mainstream aluminum space frame some 20-plus years ago, and now offers numerous models skinned and framed, at least partially in aluminum. There’s no shortage of cars today using aluminum roofs, doors and hoods, trimming incrementally at weight. Audi is far from alone in the use of lightweight aluminum body panels and structures today—Jaguar is big on aluminum construction in their rip-snorting sports cars and stately sedans, and Ford’s latest F-150, which features a body stamped from aluminum, not sheet-metal, saves hundreds of pounds, directly affecting the machine’s driving feel and fuel efficiency.

In mainstream cars, high-tensile steel is perhaps most brightly in the spotlight today when it comes to weight reduction. Automakers the globe over are switching to increased use of this extremely high-strength steel, created with special ingredients via a specialized process, to be stronger, relative to its size and mass, than regular steel.

High-tensile steel and the Malibu 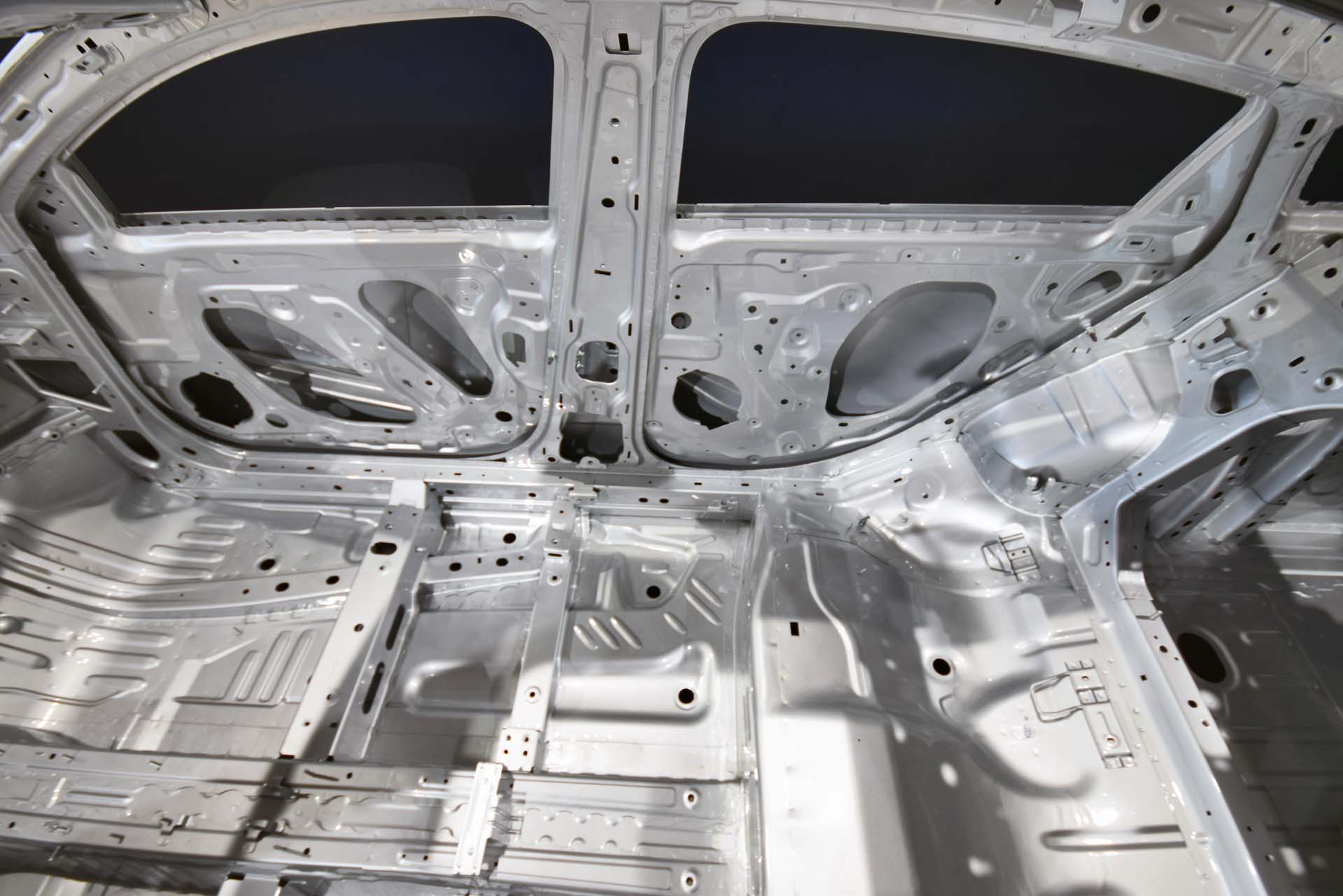 The increased strength for a given mass allows automotive engineers to create numerous vehicle structures that are simultaneously stronger and lighter, at once translating to increased interior space, reduced weight, improved safety and impact mitigation, and more.

The 2016 Chevrolet Malibu is one of the latest entries to the sedan segment to showcase the benefits of high-tensile steel. It’s larger and longer than the Malibu it replaces, and the body-in-white (that is, the body structure, free of any other attached components), is some 45 kilos lighter, despite an increase in size that sees it clock in at 50 mm longer overall and 100 mm greater in wheelbase, than last year’s car. This positions the upcoming Malibu as one of the longest cars in its class.

It’s also one of the lightest.

According to Malibu’s structural engineering team, ‘weight begets weight’, so starting with a lighter structure enables reduced weight of the components that’ll be attached to it, like steering knuckles, brake rotors and other substructures. All said, the completed Malibu comes in some 136 kg lighter than its predecessor despite the increase in size, and the even bigger increase in interior volume. 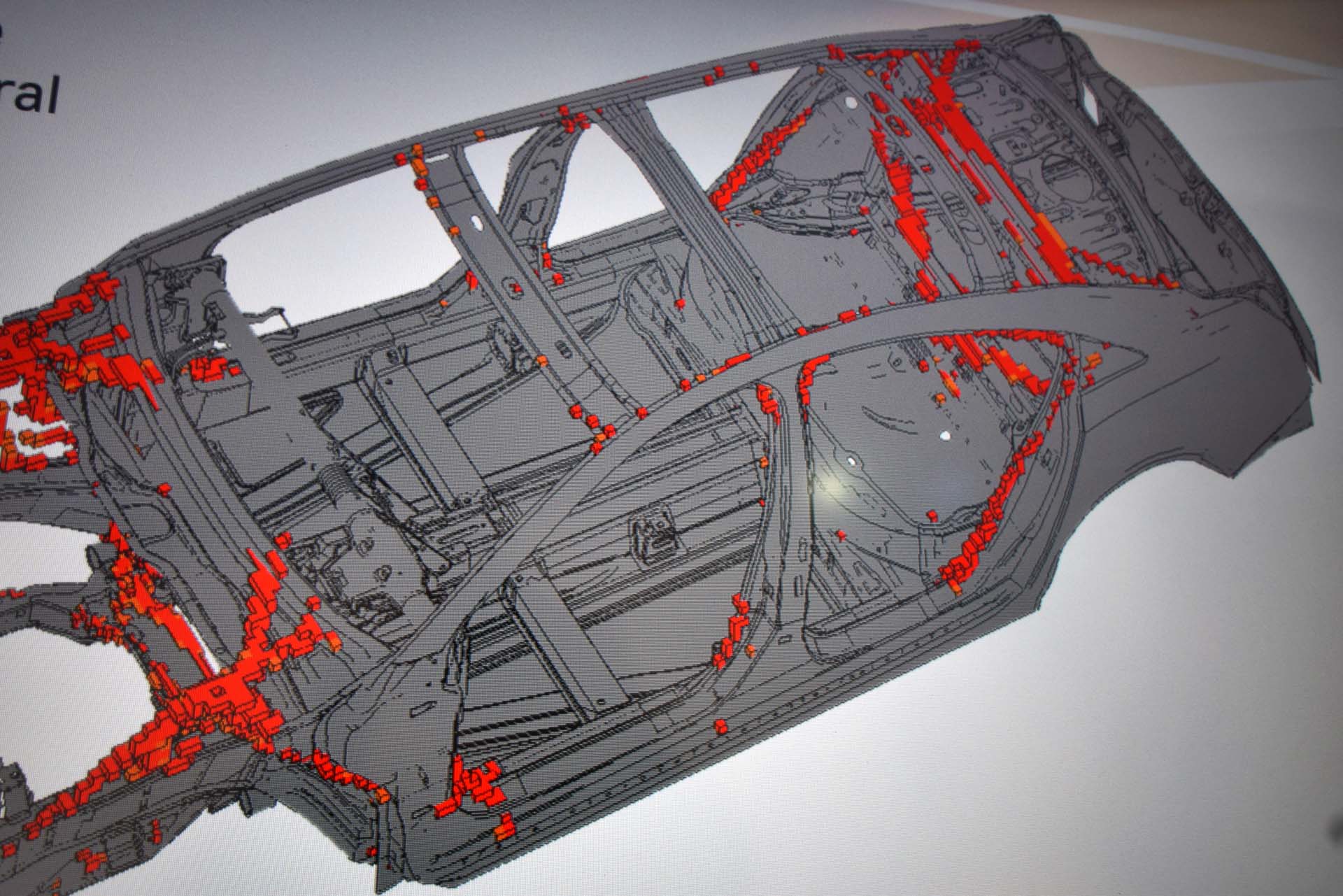 How’s it work? According to GM engineer Jeremy Short, it all starts in a computer.

“We start by computer-designing a structure that’s really, really light. Then, through software simulations, the computer identifies areas where we need more stiffness. We make the

changes, adding reinforcements, and start over.”
Short showed me a computer simulation of the initial design of the Malibu’s frame structure, designed with certain sizing and safety considerations alongside the desire for extreme light weight. The computer model was then subjected to thousands of computer tests, simulating any imaginable combination of road load, impact load and more. In these tests, the computer model analyzes the performance of the frame structure, scrutinizing and identifying weaker areas.

Using the software to amplify the flexing and twisting of this early frame structure design in the computer by several thousand times and turning it into an animation, you see a car body structure that looks about as rigid as a Jello cake.

This is the starting point.

From that initial design and animation, Short and his fellow engineers identify key areas for reinforcement, adding small, light and very strong high-tensile steel patches, blocks and segments, via the software. The tests are run again, and changes are made. Again and again. Finally, hundreds of man-hours and countless simulations later, the software analyzes the latest version of the Malibu’s new frame, confirms that it meets all identified objectives, and a mockup is created in real life.

Bring in the Reinforcements 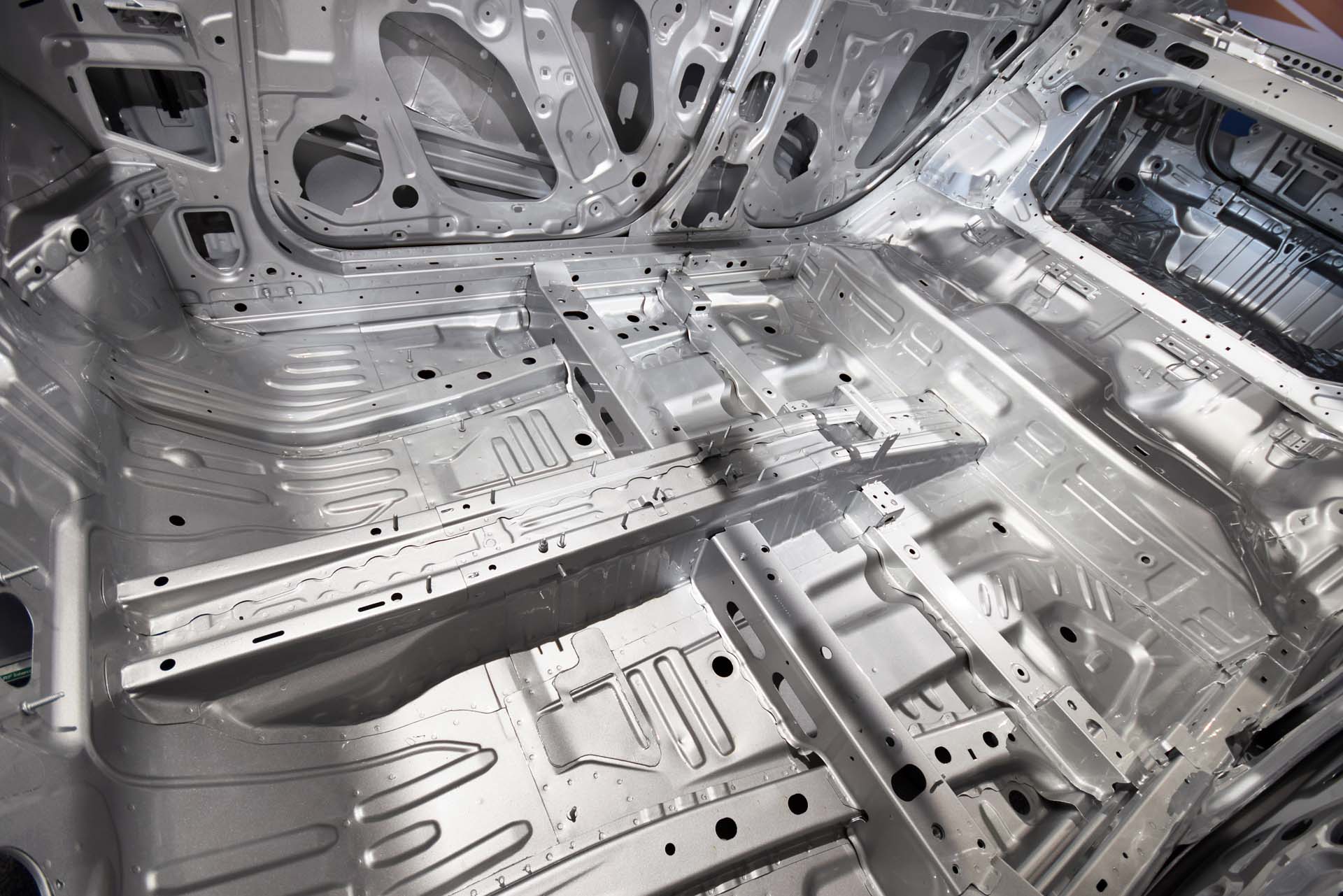 The level of design possible in a computer simulation, before any steel is welded, stamped or pressed, is mind-blowing. The Malibu’s structure starts life digitally, and is reinforced, strategically, with high-tensile steel, where needed. Engineers deploy the high-tensile steel precisely, and with marked accuracy. Not a gram is wasted.
“Used to be, if we needed a structure to be stronger, we just built the whole thing out of a stronger steel grade, which makes the structure bigger and heavier and bulkier,” said engineer Mike Strickhouser. “Now, we can use smaller patches of high-tensile steel, for instance, to strategically strengthen things like the engine rail, the area where the B-pillar meets the rocker panel, and more.”

Using reinforcements, instead of heavier-grade steel for an entire structure, has numerous benefits. Since engineers want the structure of the car to deform in certain areas for crash performance, the use of high-tensile steel as a means of targeted reinforcement allows more flexibility in the overall design.

“We can use high-tensile steel to control the behaviour of the body in an impact, and we commonly apply it in key areas where components are joined together,” explains Short.

“You want the body to be stiff, to resist twisting and bouncing,” he adds, “but no so stiff that it can’t fold or crush. Ultimately, we want the car to be as stiff as possible for handling road loads, but also a car that’s able to achieve a highly controlled crumple to handle crash loads.” 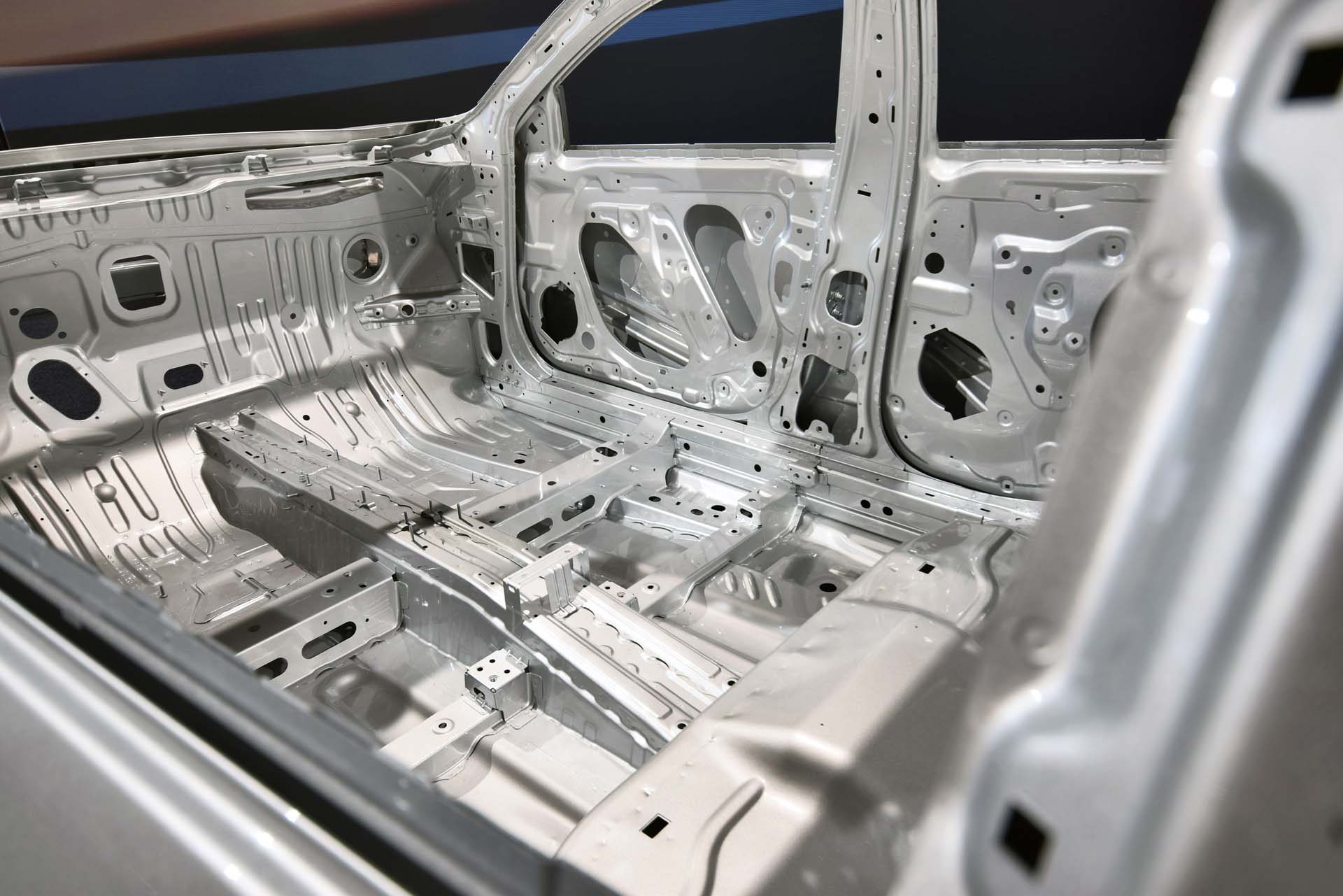 Further, because high-tensile steel allows structures like window pillars, roof rails, and rocker panels can be made slimmer and stronger simultaneously, things like outward visibility, ease of entry, and passenger volume can be improved.

A high-tensile steel body structure can even improve ride quality.

Further, as a stiffer body structure better resists deflection over bumps in the road, cabin noise is reduced since those bumps don’t cause as much deflection in the body, which causes air to be ‘pumped’ through the cabin, creating noise and turning the cabin into a sort of giant speaker. The windshield and surrounding structure, are big contributors to cabin noise on rough roads, as the windshield ‘beats’, like a drum, as the structure around it deflects in response to forces from the road passing through it. With high-tensile steel used for reinforcement, the structure is rock-solid, and the ‘beating’ is all but eliminated.

From the driver’s seat? You notice a car that feels more solid, one that’s quieter and more refined, one that handles rough roads more gracefully, and one that steers, brakes and accelerates with a refreshing level of responsiveness. And, though hopefully you’ll never experience it, you’re also feeling a car that’s safer and better set up to handle impact forces, should an accident prove inevitable.