Montreal, F1 Race Weekend, 2016 – “Have you ever read Cinderella?” Daniel Sanham briefly looks bemused, like he may have misheard the question. It’s this young Englishman’s first visit to North America – he’s only been off the plane a few hours – and our braying nasal twangs must still throw him. “Umm, no, but I saw the movie,” he smiles, “and see what you’re talking about.”

Ten months into a grand twelve-month internship, Sanham still feels the need to pinch himself occasionally. He’s one the five carefully vetted young engineering students from around the world, experiencing a once-in-a-lifetime opportunity at the Infiniti Engineering Academy. Now in its third year, this expanding program is a talent search for young engineers to work with Infiniti and the newly formed Renault Sport Formula 1 team: a fast track to the fast track, as it were.

“When I applied for the position last year, I was wondering, should I do it? F1 is so competitive. Should I even bother? Then I thought, why not at least apply? I’ve got nothing to lose.” And loads to gain.

The idea is find creative, malleable young minds whose knowledge helps Renault F1 improve its on-track performance in the short term, then apply that knowledge in the near future to the automotive world. The work term consists of two six-month stints. One is in France with the Renault F1 team and the other in England, working with Infiniti. The gig includes a modest salary, shared accommodation and car with the other winners, and plenty of opportunities to plan a bright future. While it’s a Cinderella story for him and his four peers who hail from China, Saudi Arabia, United States and Russia, it’s a smart investment for Infiniti and Renault Sport. “Obviously we’d love to keep them all once we’ve trained them,” says Tommaso Volpe, Director of Infiniti Global Motorsport, but there are no formal commitments. 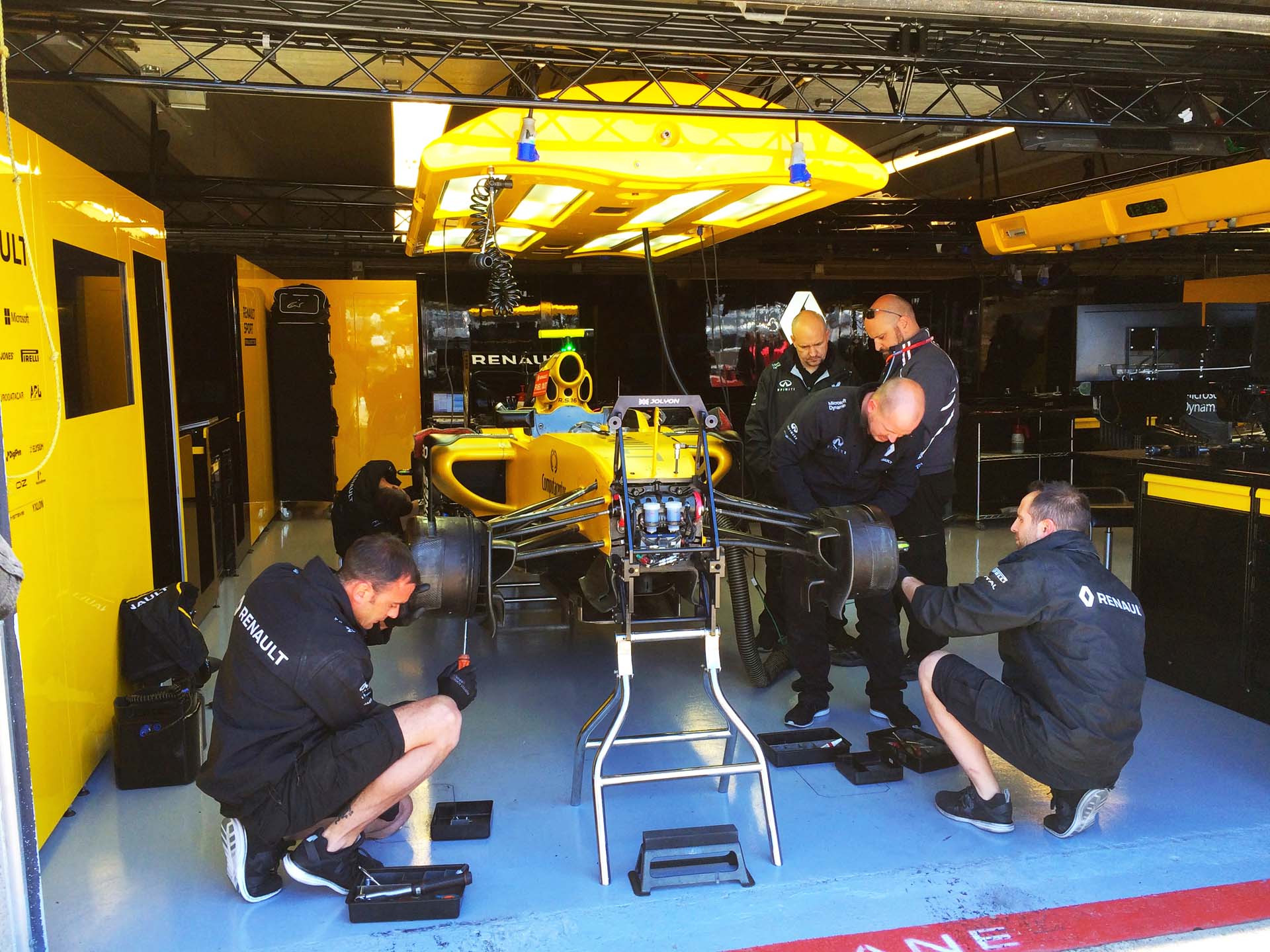 This year, the ever-evolving program is open to students from seven regions: China; Europe, including Russia; the United Arab Emirates; Asia and Oceania, including Australia and Hong Kong; Mexico; the United States; and Canada. Last year, there was no position open for a Canadian student but they still received hundreds of enquiries and applications from us. This year, we get the same representation as all of the US and China. (It may surprise you to learn how important Canada is to Infiniti. We are Infiniti’s third-largest market in the world after the US and China.) Meanwhile, the United Emirates, whose population is 9.3 million plus six oil wells, has the same clout as Europe combined with the UK and Russia. Go figure.

The Infiniti Engineering Academy’s executive search consultants are expecting as many as 5,000 applicants from around the world, says Volpe. Applicants can be undergrad engineers or, for the first time ever, master’s students. A requirement is they must be fluent in English, the lingua franca so to speak, of their daily work. (Surprisingly, Sanham’s Geordie dialect technically counts.) Their engineering discipline must be related: composite design, aerodynamics, electronics, or mechanical design. Sanham specializes in electronics. 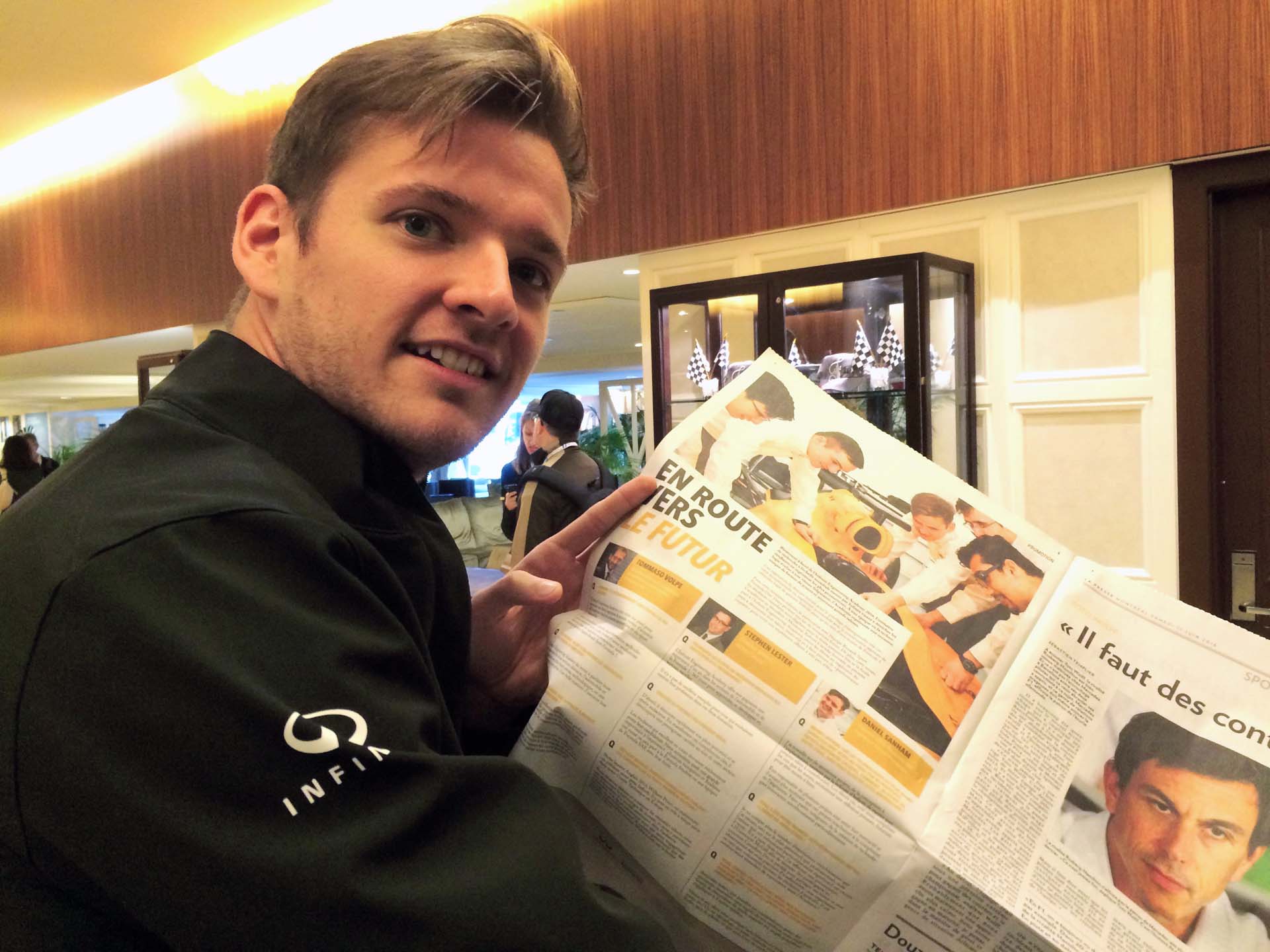 Sanham can’t talk about some of the projects he’s working on which directly affect Renault’s F1 performance because of corporate secrecy and the Brobdingnagian amounts of money poured into F1 driving tech. However, he created “a solution that monitored the test signal” in a reconfigured trigger wheel within the upright, to ensure the new configuration was “within tolerance.” His test filtered the monitored signal “and gave a simple pass or fail, based on calculations. So I programmed a little discovery electronics board – it’s just a micro-processor – to ascertain whether the upright was acceptable for use in races.” It was.

Another example of hands-on racing-car work was with radio frequency (RF) signals. “In each wheel you’ve got a tire pressure monitoring system that transmits the tire pressure via RF but the problem is the chassis is made of carbon fibre. And if RF hits carbon fibre, which is conductive, it just dissipates because of its electro-magnetic field. It can’t penetrate the chassis to be received by an antenna. So they needed to make structures on the chassis, where there’s sort of a window; a different material was used so the RF passes through. We were investigating methods to see whether the RF could in fact pass through the chassis to make sure that we were always receiving the tire pressures.”

The vetting process is brutal. 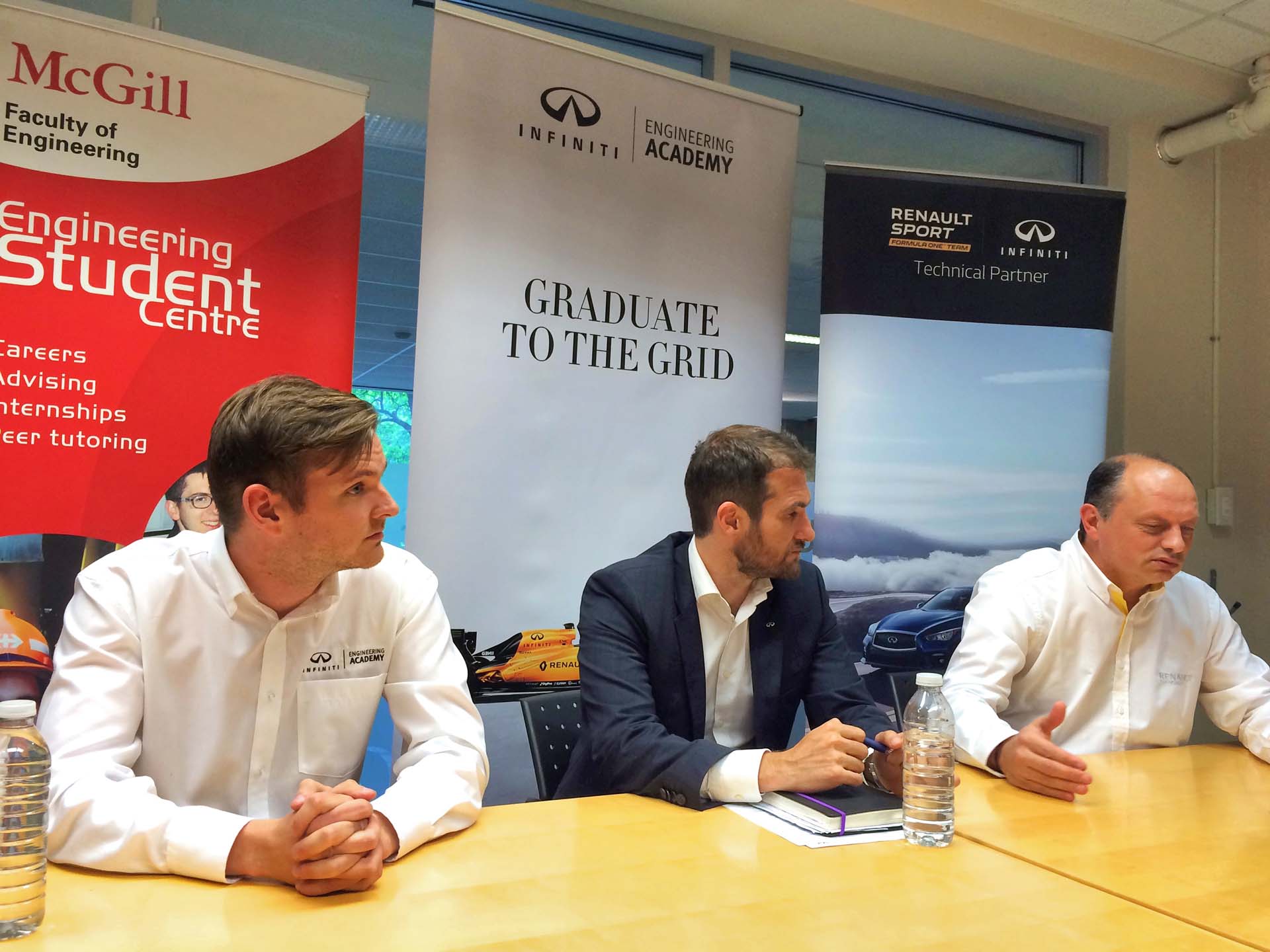 When Sanham was first brought in and introduced to us, to talk about his gig, he seemed a bit nervous but excited to begin this, his career’s first press event. The room was quiet, filled with race fans, probably hoping to receive free signed t-shirts rather than talk to students. So I asked about the vetting process.

“First I applied online, submitting my CV.” I interrupted him and provided his first trans-Atlantic translation for the Canadian room. “He means résumé.” Sanham immediately adopts the word into his patter, albeit mispronouncing it, saying resume (rhymes with legume) for the rest of the evening.

Anyway, those who make the first cut are then interviewed by Skype. “My interview went well. So I felt a little bit more confident. And then they asked me to create a video on why I felt I deserved the opportunity. I felt like the video was quite a good snapshot of who I am. And then by the time I made the final, I thought ‘Okay, maybe I can actually do this.’” Don’t get cocky, kid! 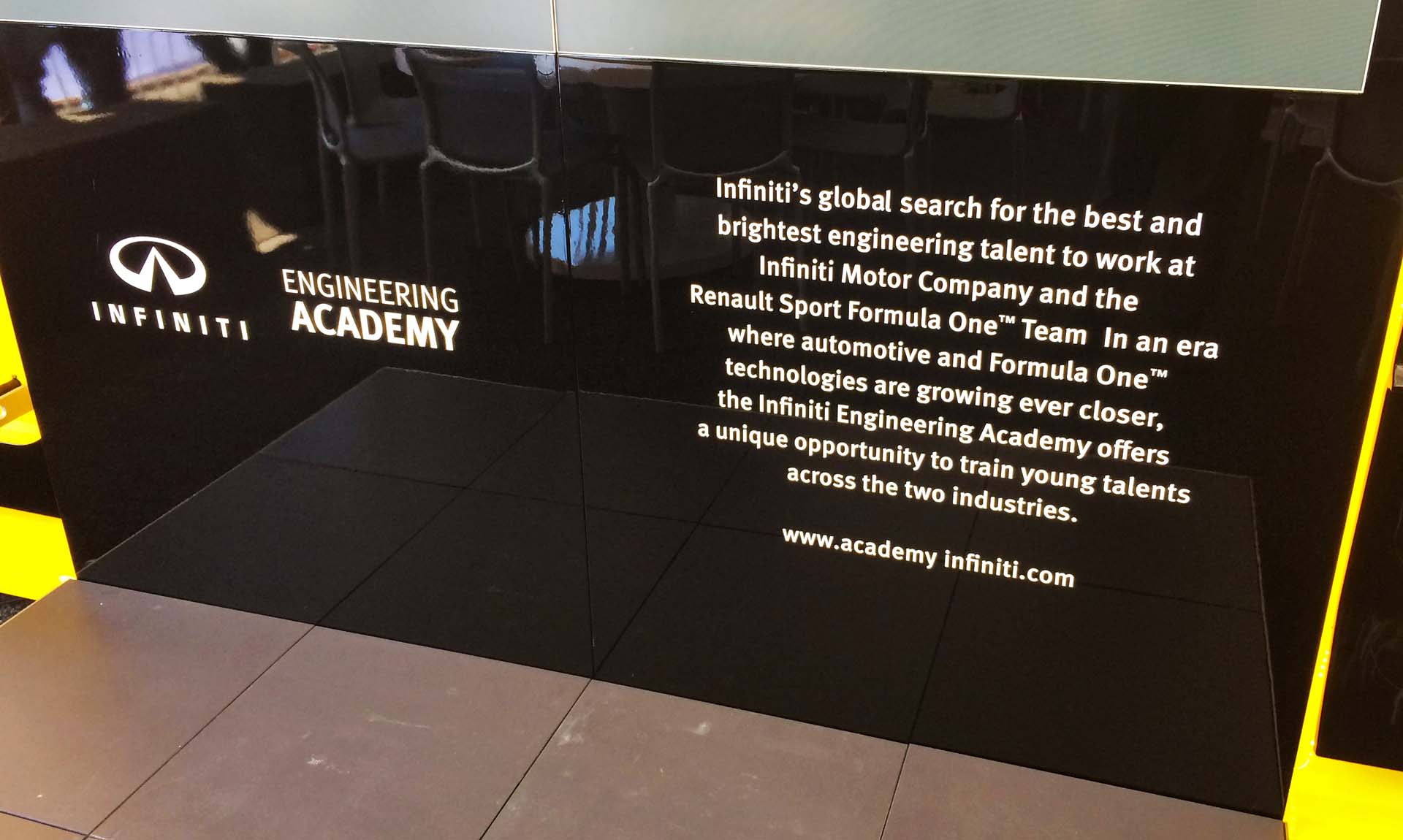 “Then I got to the final and the guys there are all really, really on top of their game. And they were all Formula SAE, which I wasn’t. The work that goes into Formula SAE is similar to Formula 1. So my confidence took a bit of a dip.”

Anyone who grows up in a working-class part of Newcastle and still has all his teeth must have superb social intelligence and quick-thinking creativity. Sanham applied what HR people call soft skills during the Infiniti Engineering Academy’s three-day bake-off. “I started to just get comfortable and threw myself into the tasks. The teamwork exercises were enjoyable – tough – but I enjoyed them.”

So what did they do? “There were a number of team tasks. One of them was to build a roller coaster. They split us up into teams and we had to work through all the different aspects of it together. There were loads of different specifications. There were a lot of obstacles and hurdles that we had to overcome. You had a deadline to do them. And once we completed it within the timeline, we were all celebrating.”

As a joke, I asked if he rode the rollercoaster they’d built, picturing something between a Lego castle and toy train. “Yeah, it was fully constructed; first we had a little RC car that we had to ride along it to make sure it worked.” It makes sense that as part of the task, the roller coaster would have to function. 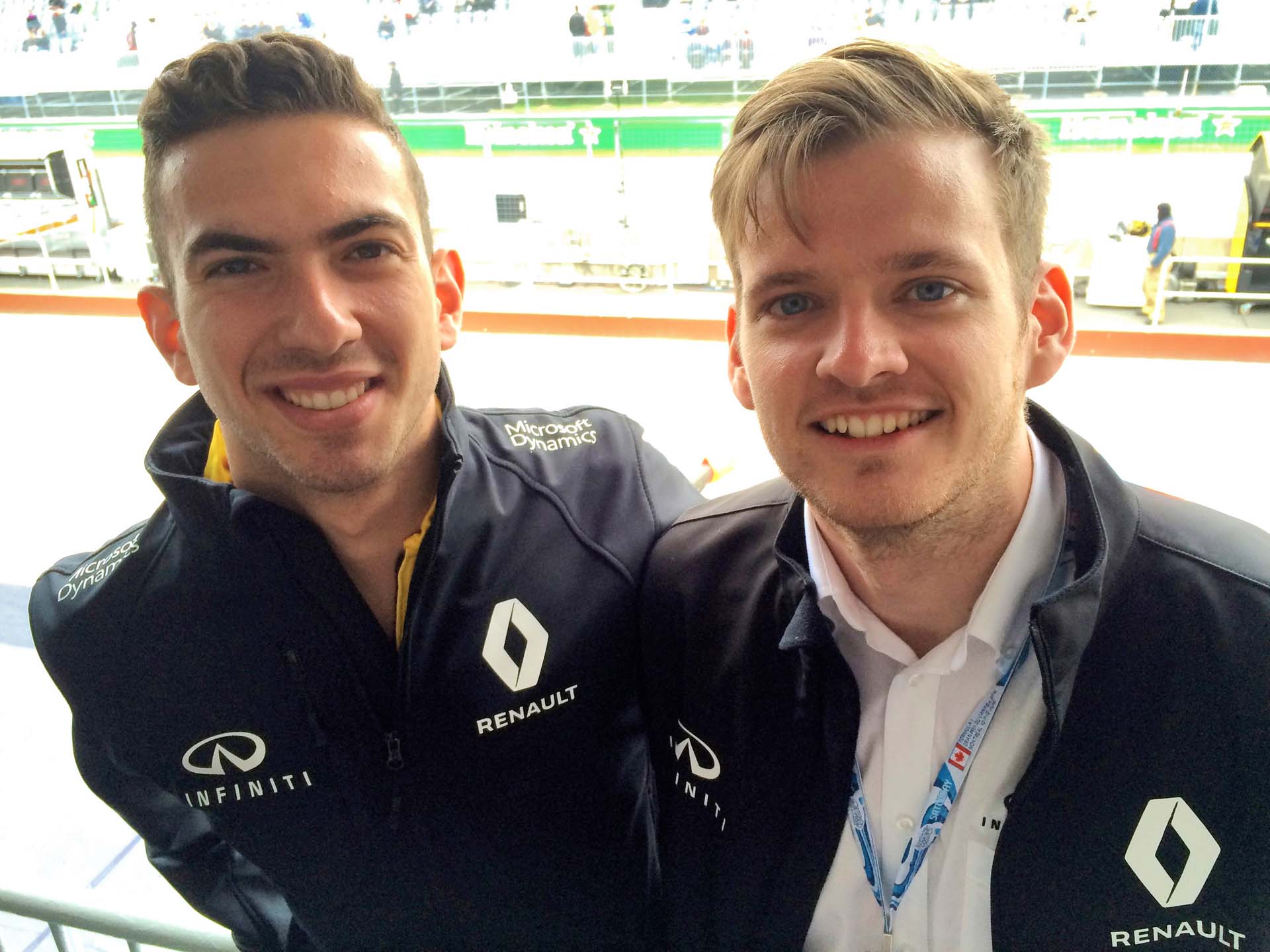 His video “contained three reasons why I felt I deserved this opportunity. One of them was that I was hard working, which I gave examples of in what I’d done previously. The second was I work really well within a team and I could deal with different cultures. I was [studying] in China at the time, which I thought reflected that second point. And third was my passion for motorsports and the automotive industry.” If you’re having trouble sleeping or stuck in an elevator, you can download it here.

Was there one thing that you believe secured the position for you? “I was in my lucky shirt. It’s blue and white striped.” Are you sure it was the shirt? “Okay, maybe it wasn’t the shirt that got me the job. Let’s say it gives me confidence.”

Advice for the kids? “If you make it to the final, be yourself. Be honest. If you’ve got ideas, brilliant, but don’t go in there, saying, ‘This is the idea and this is what we should do!’ Don’t shy away either. Just try and take the middle ground. Try and bring people into the conversation. And work as a team. I mean, you have to win it but you’re not gonna win the final if you don’t work well within the team.”

Where would he like to be a year from now? 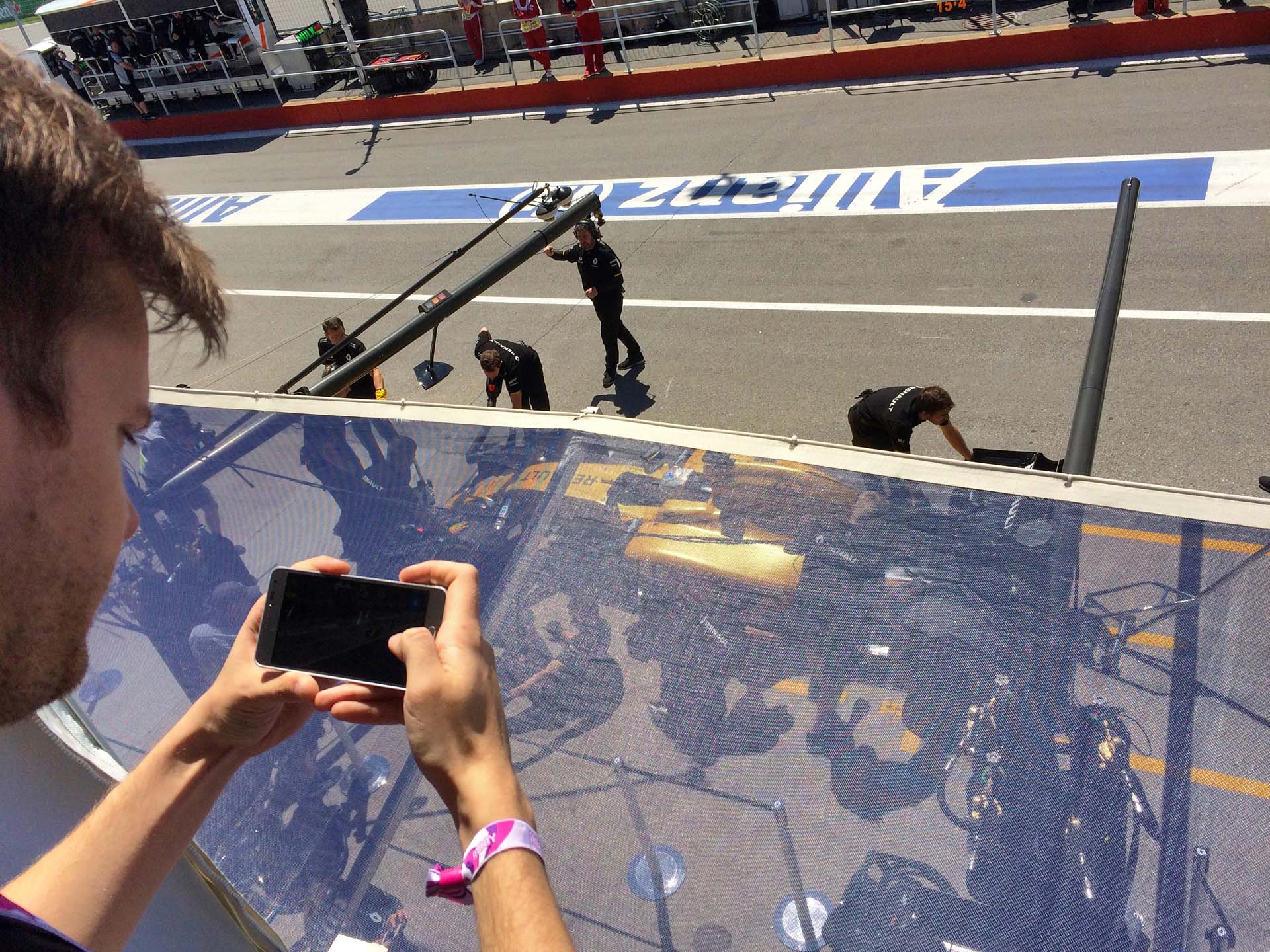 “Right now I’m loving being at Renault. So motorsport is something that would be really interesting. But I’m also really excited by Infiniti, automotive and the incredible infrastructure they’ve got and the support and training they give you on the job. I had a lot of days where I was learning specific industry tools . . .  but then there’s F1 and it’s the pinnacle….” Decisions, decisions.

Mind, he hasn’t even finished his engineering degree and, functionally, is experiencing a gap year in his studies at University of Nottingham. Hell of a gap, though. “I’ve got to finish my degree but then hopefully I’ll be back. It’s gonna be tough having a year out but….”

Cinderella is hoping to be invited to the ball.